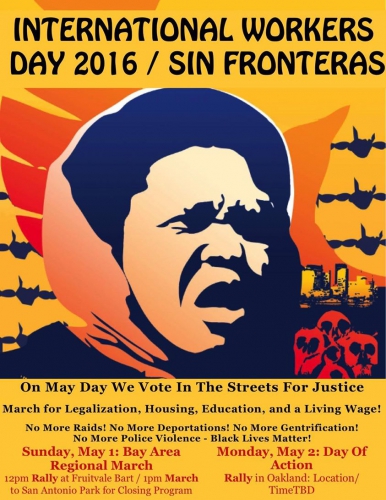 Call to Action: On May Day 2016, We Vote in the Streets for Justice!

We, the Bay Area May Day Coalition, call on all immigrant, labor, and community of color organizations to endorse and mobilize for May 1st and May 2nd, 2016.

In the Bay Area our communities face increased state and economic violence. Only by building a mass movement in the streets that unites all of our struggles can we win our fight for justice and dignity. This May Day, it’s our day to vote! To endorse this call to action, please email Baymaydaycoalition [at] gmail.com. Please also fill out this form:

UPHOLD WORKER AND STUDENT RIGHTS
We demand respect for all workers’ rights: living wages and employee benefits, and an end to labor trafficking and wage theft. We demand empowering and free education, including ethnic studies programs, and for campus Graduate Student Workers to earn fair wages.

LEGALIZATION FOR ALL UNDOCUMENTED MIGRANTS, IMMEDIATE END TO DEPORTATIONS
We demand a clear path to legalization for all and an end to deportations and detentions. Regardless of skill, background, history of criminalization, sexuality, or gender identity, all migrants and their families have the right to freedom of movement and to live together in dignity.

BRING OUR LOVED ONES HOME FROM PRISONS, JAILS, AND DETENTION CENTERS
We march against all forms of state violence, including those inherent to systems of policing, imprisonment, and surveillance that primarily target Black, Brown, and poor communities. We march for the freedom of our loved ones locked in cages and for the families of those killed by the police.

BUILD AND DEFEND STRONG AND HEALTHY COMMUNITIES
We demand access to meaningful work, guaranteed and comfortable housing, free and sustainable healthcare, and environmentally sustainable communities. We demand real solutions to reverse the effects of climate change that endanger us all globally but especially poor people and people of color.

END U.S. MILITARY AGGRESSION & CAPITALIST POLICIES THAT FORCE MIGRATION
More than 200 million people have been forced to leave their country of origin because of war, environmental degradation and unequal trade policies. We say: No More! End US military aid. End US imperialism and support for colonial governments.