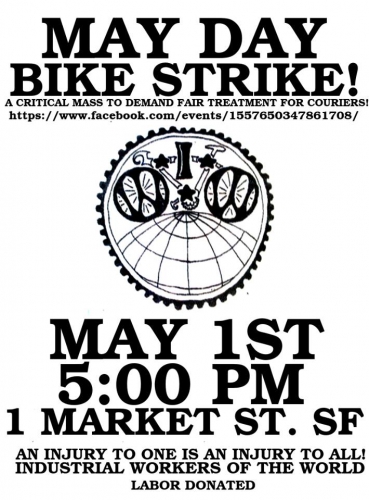 OAKLAND – Bicycle couriers laid off by Sprig, Inc. have called for a rolling picket of Sprig, Postmates, and other dot com delivery companies in San Francisco on Sunday, May 1.  They plan to lead a Critical Mass “Bike Strike” to draw attention to what they say are the companies’ mistreatment, which includes low pay, “a no tip policy”, no benefits, no sick or vacation days, chaotic scheduling, limited hours, and misclassified as independent contractors rather than employees.

Earlier in the Day, the Bay Area Industrial Workers of the World Couriers Union will lead a bike contingent in a May Day march which will begin  11 AM  at the ILWU Hall, at 400 North Point in San Francisco.  The march will go to Harry Bridges Plaza where there will be a rally at  1 PM .  https://www.facebook.com/events/1266244166737216/

The International Longshore & Warehouse Union, Local 10, which will lead the march, called it as part of a “National Day of Mourning” for Black and Brown unarmed victims of police killings across the country, according to a report by the San Francisco Bay View newspaper. http://sfbayview.com/2016/04/join-ilwu-local-10-for-may-day-2016-national-day-of-mourning-for-victims-of-police-terror-bernie-sanders-danny-glover-invited-to-speak/

A courier named Wildcat said that the bike picket is in response to Sprig’s bike couriers being laid off without notice. She said that Sprig’s move to “curbside delivery” by car was actually, “in retaliation for a union organizing drive by the Bay Area IWW Couriers Union.” She said that bike couriers had recently asked management to change its no tip policy; for flexible full-time scheduling; better backpacks; hazard pay for deliveries in inclement weather; and a raise to $16 Dollars an hour.

Sprig, Inc. delivers food cooked in its kitchens. It’s website states that its food is cooked with fresh ingredients and that its suppliers are, “...sustainable, local, and ethical growers...” and that they, “...choose organic produce as a high priority and opt for meat that is sustainably-raised.” Sprig delivers by car, but in downtown San Francisco, until recently, it had been using bike couriers due to traffic and limited parking. Now, Sprig is delivering all food by car and requiring downtown customers to come out and meet the car at the curb.

Sprig had originally classified the bike couriers as independent contractors and paid $20 an hour, according to Wildcat. That was later reduced to $16 hour.  Independent contractors are not entitled to any benefits and are not covered by the National Labor Relations Act. As of January 1, 2016, Sprig re-classified the couriers as employees, which made them eligible for benefits, but reduced their pay to $13.50 an hour, Wildcat recounted.

At a meeting called by Sprig on April 14, manager Matt Landry informed the bike couriers that they were all laid off.  There was no notice and severance pay was only offered to some couriers, conditional on their agreeing not to sue Sprig, according to Wildcat.

An unfair labor practice charge in retaliation for union organizing has been filed against Sprig with the National Labor Relations Board, according to a spokesperson for the Union.

By press time, Sprig had not responded to requests for an interview or to issue a statement.

In a related development, in January, the California Labor Commissioner’s Office ruled that a driver for the ride-hailing service Uber should be classified as an employee, not an independent contractor. Uber is appealing the decision. http://www.nytimes.com/2015/06/18/business/uber-contests-california-labor-ruling-that-says-drivers-should-be-employees.html?_r=0

One speaker expected at the bike picket is Donovan Reid.  According to a report by PhotographyisNotaCrime.com, Reid was pulled over in a questionable traffic stop, then beaten by SFPD, while delivering a burrito on bike for Postmates, on January 3, 2016.  He suffered a fracture to his knee as a result.  There is video of the beating. The police are said to be investigating the incident.  https://photographyisnotacrime.com/2016/01/san-francisco-police-beat-man-for-using-navigation-app-on-phone-while-riding-bike-to-deliver-burrito/

Wildcat, told IndyBay.com that Postmates refused to pay Donovan disability benefits, because they classify him as an independent contractor, rather than as an employee.

Reid told IndyBay.org that he expects a tough fight with the delivery companies to win rights for couriers.  “We have to be resilient.  A lot of things will happen.  The companies will try to not offer coverage as employees.  They will use shady strategies and loopholes in order to not offer couriers the best that they can offer.  We need to unify, stay together, have each others back, and push back,” said Reid.

Postmates’ website describes its service as a, “delivery platform [that] connects customers with local couriers, who purchase and deliver goods from any restaurant or store in a city.”