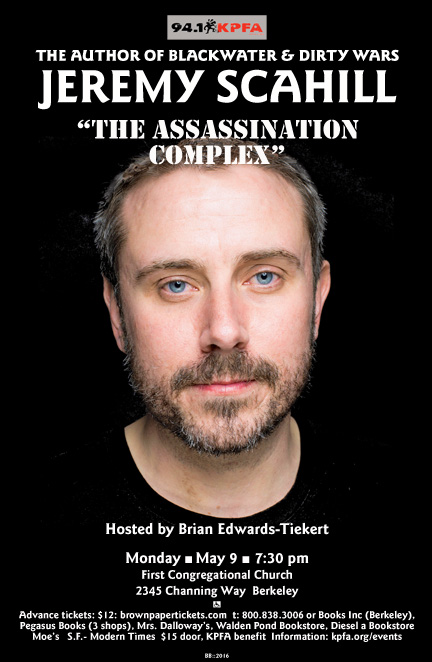 He will also discuss The Intercept, where he works with Laura Poitras, Glenn Greenwald and other ace reporters. KPFA's host for this event will be Brian Edwards-Tiekert.

The Assassination Complex reveals stunning details of the government’s secretive and horrific drone warfare program, based on documents supplied by a confidential source in the intelligence community.

Drones are a tool, not a policy. The policy is assassination. Proponents of drone warfare, however, prefer the term “targeted killings.” But drone strikes Frequently kill people who are not the intended target. Unless it can be proven otherwise, the government refers to these unintended victims as “enemies killed in action.” These deaths – all too often of women and children – dwarf the number of actual combatants who have been murdered by drones. They have generated among foreign populations intense anger toward the U.S., and they have become a recruiting tool for jihadists.

Jeremy Scahill and his colleagues on The Intercept obtained a cache of classified slides from a source within the intelligence community that provides a startling window onto the Inner workings of the U.S. military’s drone operations. These documents make it possible to begin the necessary, long-overdue debate about this 14-year campaign of targeted killing that has been deliberately hidden from the public, and exactly why it is conducted so ruinously in so many places.

Jeremy Scahill, one of the three founding editors of The Intercept, is an investigative reporter, war correspondent, author of the internationally bestselling books Dirty Wars and Blackwater, and twice a recipient of the George Pol Award. He will also discuss The Intercept, the investigative web magazine founded by Glenn Greenwald, Laura Poitras, and Jeremy Scahill, a publication of First Look Media.

Brian Edwards-Tiekert, host of this one-time event, is the daily host of UpFront, KPFA’s popular hour-long news magazine with a strong focus on state and local issues.

Major revelations about the US government's drone program-bestselling author Jeremy Scahill and his colleagues at the investigative website The Intercept expose stunning new details about America's secret assassination policy.

When the US government discusses drone strikes publicly, it offers assurances that such operations are a more precise alternative to troops on the ground and are authorized only when an "imminent" threat is present and there is "near certainty" that the intended target will be killed. The implicit message on drone strikes from the Obama administration has been trust, but don't verify.

The online magazine The Intercept exploded this secrecy when it obtained a cache of secret slides that provide a window into the inner workings of the US military's kill/capture operations in Afghanistan, Yemen, and Somalia. Whether through the use of drones, night raids, or new platforms yet to be employed, these documents show assassination to be central to US counterterrorism policy.

The classified documents reveal that Washington's fourteen-year targeted killing campaign suffers from an overreliance on flawed signals intelligence, an apparently incalculable civilian toll, and an inability to extract potentially valuable intelligence from terror suspects. This campaign, carried out by two presidents through four presidential terms, has been deliberately obscured from the public and insulated from democratic debate.

The book will include original contributions from Glenn Greenwald and Edward Snowden.

Jeremy Scahill is one of the three founding editors of The Intercept. He is an investigative reporter, war correspondent, and author of the international bestselling books Dirty Wars: The World Is a Battlefield and Blackwater: The Rise of the World's Most Powerful Mercenary Army.

$12 advance, $15 door.
END_OF_DOCUMENT_TOKEN_TO_BE_REPLACED
Add Your Comments
Support Independent Media
We are 100% volunteer and depend on your participation to sustain our efforts!