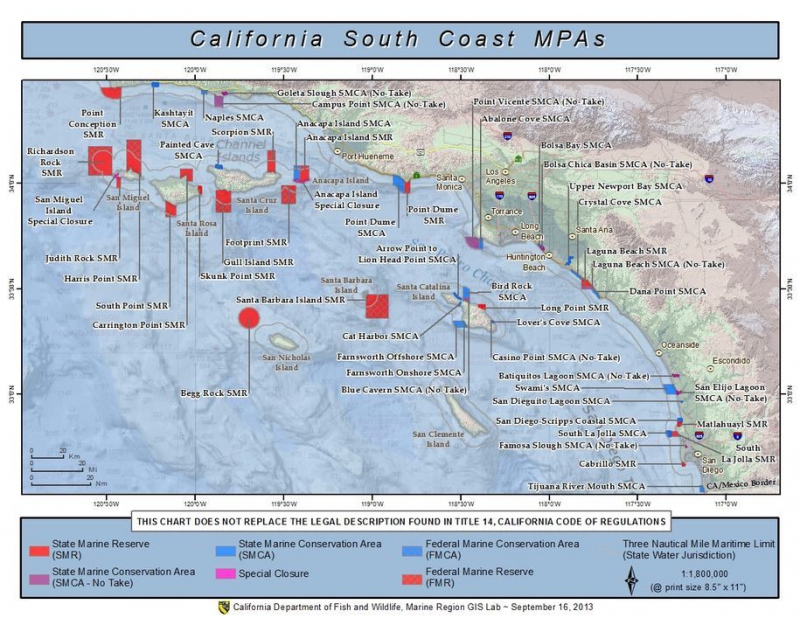 In one of the biggest environmental conflicts of interest in California history, Reheis-Boyd led a process that created faux "marine protected areas" that fail to protect the ocean from fracking, oil spills, offshore oil drilling, pollution, corporate aquaculture, military testing and all human impacts on the ocean other than sustainable fishing and gathering. At the same time that Reheis-Boyd was leading the campaign to expand fracking and offshore drilling in California, state officials and MLPA Initiative advocates praised the process that she oversaw as "open, transparent and inclusive" when it was anything but.

The "marine protected areas" created under the leadership of Reheis-Boyd and other corporate operatives not only fail to protect the ocean, but they are based on incomplete and terminally flawed science and violate the traditional gathering and fishing rights of the Yurok Tribe and other North Coast Tribes. The Brown administration "completed" the "network" of flawed "marine protected areas" on December 19, 2012, when the North Coast MPAs went into effect. (https://intercontinentalcry.org/the-five-inconvenient-truths-about-the-mlpa-initiative/)

The suspicions of Tribal leaders, fishermen and grassroots environmentalists that there was something very "fishy" about the failure of the oil lobbyist-overseen MLPA Initiative to protect the ocean from oil drilling and pollution were confirmed in the summer of 2013 when an Associated Press and Freedom of Information Act investigation revealed that oil companies had fracked at least 200 wells in state and federal waters off Long Beach, Seal Beach, Huntington Beach and in the wildlife-rich Santa Barbara Channel.

"Hey, nobody is happier than I am about the MPA network off our coast, and nobody wants to see them succeed more either," said Joey Racano, Director of the Ocean Outfall Group, in December 2013 in a comment on the North Coast Journal website. "But there are fatal flaws.

"As Chair of the MLPA Blue Ribbon Panel during the final important phase (implementation), Catherine Reheis-Boyd absolutely must have known offshore fracking was going on with no public knowledge or input. As President of the Western States Petroleum Association, it isn't possible that she didn't know. So she steered the MLPA process clear of the subject, and now we have a grave threat to all State Marine Reserves," said Racano. (http://www.northcoastjournal.com/humboldt/joey-racano/Profile?oid=2449818)

Since the extent of offshore fracking in federal waters has been revealed, representatives of fishing groups, indigenous organizations and environmental groups have pushed for a fracking ban on the California coast.

However, the Obama administration, like the oil industry-captured Jerry Brown administration, has supported the expansion of fracking and other extreme oil drilling techniques in California. In February, the federal government released a draft proposal to lift the offshore fracking moratorium, which had been put in place under a legal settlement with the Center for Biological Diversity and Environmental Defense Center.

"Interior’s preliminary environmental assessment proposes allowing oil companies to frack and discharge their wastewater — including toxic fracking chemicals — into the ocean," according to a news release from the Center for Biological Diversity.

The opposition to environmentally destructive fracking in California's marine waters is building rapidly. On March 22, over 30 prominent scientists urged the federal government to continue the moratorium on fracking in federal waters off the California coast and to prepare a comprehensive environmental impact statement for the controversial oil-industry technique.

"We write as scientists to urge you to conduct a comprehensive environmental review of the risks of hydraulic fracturing (“fracking”), acidizing, and other well-stimulation techniques off the California coast," the scientists wrote. "We strongly advise you to continue the current moratorium on offshore well stimulation in California until a comprehensive review and scientific studies demonstrate that fracking and acidizing do not threaten wildlife, the marine environment, coastal communities, and the climate."

"Scientific studies have documented that fracking and acidizing pose a wide range of risks to human communities and ecosystems. Documented threats include air and water pollution from toxic and carcinogenic chemicals used during well stimulation, climate disruption particularly
due to methane leakage, increased earthquake risks, and significant harms to species and ecosystems from habitat loss and degradation, pollution, habitat avoidance, and human disturbance," they said.

In another letter sent yesterday to the Department of the Interior, 128 health, environmental, indigenous, labor and business organizations urged the federal government to ban offshore fracking. (http://www.biologicaldiversity.org/campaigns/offshore_fracking/pdfs/NGO_letter_re_offshore_fracking_2016_.pdf)

“Given the known environmental and health hazards of fracking, as well as the information gaps of offshore fracking, we ask you to prohibit oil companies from fracking and acidizing wells off the California coast,” the letter states.

"First, oil companies dump their wastewater mixed with fracking chemicals into the ocean. Many of these chemicals are toxic to people and animals and pose a threat to California’s marine life.

Second, offshore fracking brings the same risks as onshore fracking - which has a bad track record of spills, accidents and earthquakes - with the added risks of the ocean environment.

The letters come just before the March 23 end of the public-comment period on the proposal to resume offshore fracking. After the close of comments the government could resume permitting offshore fracking for oil and gas off the California coast "at any time," according to the Center for Biological Diversity.

Offshore fracking, an environmentally devastating oil extraction technique that threatens fish, marine mammals, invertebrates and the entire marine ecosystem, blasts vast volumes of water mixed with toxic chemicals beneath the seafloor, at pressures high enough to fracture rocks. It is about time that both the Obama and Brown administrations support a permanent ban on fracking off the California coast.

At the same time, it is important that we pressure the Brown administration to fully enforce the Marine Life Protection Act of 1999. That means protecting California's "marine protected areas" from pollution, oil spills, corporate aquaculture, military testing and other human impacts to the ocean besides fishing and gathering.

The oil and gas industry is the most powerful corporate lobby in California and the West. Big Oil spent a record $22 million to lobby state officials in 2015 - and the Western State Petroleum Association spent the most, a record $11 million. The massive gusher of money ensured that no bills opposed by the industry made it out of the Legislature. (http://www.eastbayexpress.com/SevenDays/archives/2016/02/11/california-oil-lobby-spent-a-record-22-million-in-2015)

In related news, a new study in the Journal of Toxicological and Environmental Chemistry reveals that oil companies use dozens of extremely hazardous chemicals to acidize wells in California, raising water contamination and public-safety concerns, (https://www.indybay.org/newsitems/2016/03/22/18784399.php)
Add Your Comments
Support Independent Media
We are 100% volunteer and depend on your participation to sustain our efforts!