March For The Beach Flats Garden 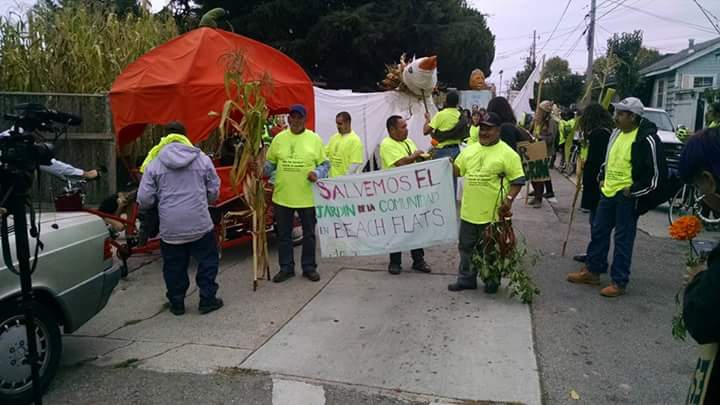 We need your help in here the struggle to protect the Beach Flats Garden, the largest green space in the densest and poorest neighborhood in Santa Cruz and an island of agroecological and cultural diversity. The Boardwalk and the city are threatening to evict the gardeners from this space they have been tending for two decades. This week, steps were taken to clear them out and the gardeners are asking for the community's support.

Rally and March - Tuesday, 9th, 5pm (rally) and 6pm (march)
Beach Flats Garden - on third between Raymond and Uhden
We will be marching to say to the city:

Over the past year, the gardeners have asked the community for support, and when 4000 people signed the petition and 200 people showed up to the city council last fall, the city agreed to attempt to negotiate a sale with the owners of the property, who also own the boardwalk and much of the rest of the neighborhood. The council recognized that the city master plan plan calls for far more green space than Beach Flats currently enjoys and that the garden is all that is left. They also responded to the argument that cultural and agroecological diversity are crucial to our city that is so rapidly gentrifying. However, the city leaders have fallen down on the job and are more focused on securing a short-term lease for only 60% of the property than negotiating a long-term solution.

We need you to show up and support the gardeners and garden and encourage the city to work on our behalf! When the crowds showed up, they seemed ready to prioritize the community over profit.

Lets return to their door and hold them to their word. Join us Tuesday 5pm at the garden, 6pm to march and 6:30 at the city council!!

Here are links to recent articles on this story:

Gardeners at the Beach Flats Community Garden and their supporters plan to rally and march to City Hall to ask that the City Council:

Take real steps towards negotiating for the acquisition of the garden, such as doing an appraisal and bringing in the Office of Economic Development.

Protect the whole garden by asking the Seaside Company to not damage anything in the 40% they want to take over while negotiations over the acquisition of the property are going on.

Refrain from taking legal action against the gardeners or punishing their activism by not giving them space in the garden they have worked so hard to preserve.


The City Council will deliberate the question of initiating legal action against the gardeners during the afternoon closed session today, February 9. The gardeners plan to deliver a letter to the City before the closed session, restating their desire to continue respectful conversation with the goal of finding a mutually acceptable path forward. The group also wants to make it clear that they do not intend to sue or otherwise take legal action against the City of Santa Cruz, but they do wish to continue gardening at the Beach Flats as the process moves forward. The English translation of the letter reads:

“We the beach flats gardeners are trying to come to agreement with the city and the Seaside company through respectful conversation, to protect the work we have done in the Beach Flats Community Garden over the past 25 years. We agree that we wish to protect 100% of the garden.

We have no intention of suing the city of Santa Cruz. We have heard that the city is considering legal action against us.”


A signed copy of the letter will be available later today.

###
Add Your Comments
Latest Comments
Listed below are the latest comments about this post.
These comments are submitted anonymously by website visitors.
TITLE
AUTHOR
DATE
you are marching after oral communications
hello
Support Independent Media
We are 100% volunteer and depend on your participation to sustain our efforts!