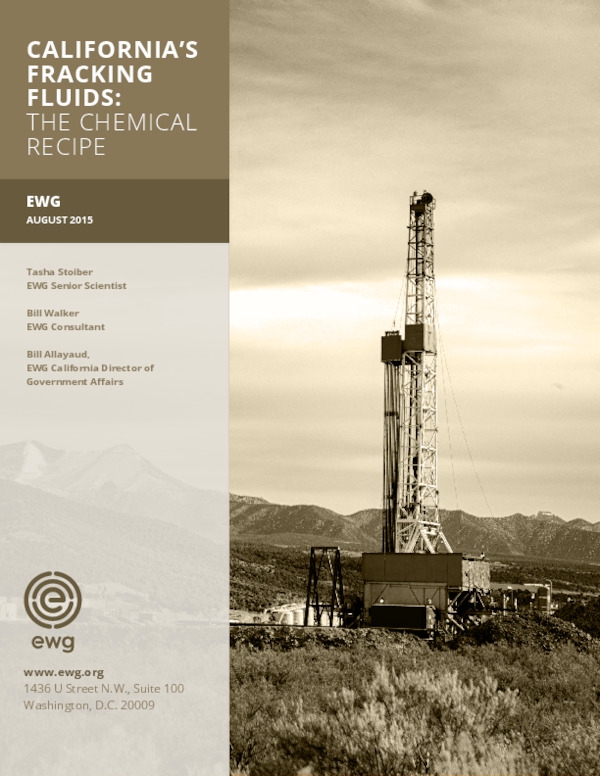 For the past several years, Catherine Reheis-Boyd, the President of the Western States Petroleum Association (WSPA), and other oil industry representatives have claimed that fracking is "safe" and causes no environmental harm.

"WSPA's position on hydraulic fracturing is well known and well documented: in the 60 years that the practice has been in use in California, there has been no evidence that it has caused harm to public health or to the environment," said Reheis-Boyd, the former Chair of the Marine Life Protection Act (MLPA) Initiative to create "marine protected areas" in Southern California, in her blog on the WSPA website. (https://www.wspa.org/blog/post/other-side-hydraulic-fracturing-debate)

However, a report released by the Environmental Working Group (EWG) on August 12 helps to counter oil industry claims that fracking is "safe" and doesn't cause harm to the environment, since it documents the use of 197 unique chemicals used in fracking operations in the state. An EWG analysis of state data reveals that the fluids used in hydraulic fracturing of oil wells in California contain dozens of chemicals that "are hazardous to human health, including substances linked to cancer, reproductive harm and hormone disruption."

Your can read the report and executive summary here: http://www.ewg.org/research/california-s-toxic-fracking-fluid-chemical-recipe

According to the report's executive summary, "Under a 2013 California law (SB 4) requiring disclosure of all chemicals used to boost production from oil wells by fracking or similar methods, drilling companies reported using 197 unique chemicals in 691 oil wells from December 2013 through February 2015. The fracking fluids typically contained two dozen or more different chemicals."

“Fracking is inherently problematic because of the chemicals used in the fluid,” said Tasha Stoiber, EWG senior scientist and a co-author of the report. “Since California has one of the most comprehensive and transparent disclosure programs in the nation, it’s the best window we have on the specific chemicals drillers are injecting into the ground. Disclosure of these hazardous or little-known chemicals to the public is necessary to gain much needed information on the risks of fracking.”

Fracking fluid is a mix of water, chemicals and sand that is pumped into underground shale rock formations under great pressure to free up trapped oil and gas, according to Stoiber. After a well is “treated” in this way, some of the fluid flows back to the surface, usually picking up additional chemicals that occur naturally in the shale.

"In California, most of the wastewater is disposed of in underground injection wells or in unlined pits, some of them dangerously close to potential sources of drinking or agricultural water. An earlier EWG analysis found that fracking wastewater contains numerous hazardous substances, some at levels much higher than state drinking water regulations allow," according to the report. (EWG 2015).

But the group pointed out that the EPA relied on data from FracFocus. org, an industry-funded voluntary database that – unlike the California law – allows companies withhold information they consider "trade secrets." FracFocus.org has repeatedly come under criticism for inaccuracies and lack of transparency (Hass et al 2012).

"Comparing the state and EPA data shows that some of the most hazardous chemicals are used less often in California than nationwide, but the typical California job uses about twice as many distinct chemicals as the national average. And because fracking in California tends to use less water than in other states, the concentrations of chemicals in fracking fluids are sometimes higher," EWG stated. (CCST 2015).

The group noted, "All citizens, and especially those living near fracking operations, have a right to understand the risks posed by fracking chemicals. In the absence of a moratorium or ban on fracking, California should make public safety its primary goal, not increasing the production of hydrocarbons"

To accomplish this, the group urged California regulators to take the following actions:

• immediately halt the injection of wastewater into potential sources of drinking or agricultural water; and

• support recommendations for groundwater monitoring in oil and gas areas and properly enforce the model criteria developed under the disclosure law.

"All told, 197 unique chemicals were used at those California oil wells between December 2013 and February 2015, including 15 identified under a state law as known to cause of cancer or reproductive harm," Californians Against Fracking stated on their Facebook page, in response to EWG's report. "And yet Gov. Brown allows fracking."

The WSPA has not yet responded to the report on their blog and website.

How is this possible? It's possible because Big Oil is the largest, most powerful corporate lobby in Sacramento and, along with agribusiness, developers and other corporate interests, has captured the regulatory apparatus.

No industry has done a better job of capturing the regulatory apparatus than Big Oil. The oil industry exerts inordinate influence over the regulators by using a small fraction of the billions of dollars in profits it makes every year to lobby state officials and fund political campaigns.

Big Oil spent an amazing $266 million influencing California politics from 2005 to 2014, according to an analysis of California Secretary of State data by StopFoolingCA.org, an online and social media public education and awareness campaign that highlights oil companies’ efforts to “mislead and confuse Californians.”

For more information, go to: http://www.eastbayexpress.com/SevenDays/archives/2015/07/29/californias-biggest-secret-oil-industry-capture-of-the-regulatory-apparatus

A recent independent study by the California Council on Science and Technology (CCST) reveals the dangers of fracking and extreme oil extraction in the Golden State. Based off data pulled from that study, here are 10 reasons why Gov. Jerry Brown must ban fracking in California, according to Californians Against Fracking. (http://californiansagainstfracking.org/10-reasons-governor-brown-must-ban-fracking-in-california/)

About three quarters of fracking in California takes place in shallow wells less than 2000 ft. deep(1). This increases the risk of water contamination because fracking can create direct conduits for pollutants to reach groundwater used for drinking and irrigation(2). Toxic wastewater from fracking and production is also disposed of by illegally injecting it directly into our protected drinking water aquifers(3). In addition, wastewater is commonly disposed of in unlined pits, a practice that has been banned in other states.(4) There is ample evidence that these unlined pits have contaminated groundwater(5).

2. Wastewater from oil fields where fracking has occurred is used to irrigate crops.

Wastewater from oil production in Kern River and Mount Poso – where fracking has occurred – is being used for crop irrigation. It is likely that fracking fluids are in the water being used for irrigation(6). Prior to use, wastewater undergoes treatment that is insufficient to remove dangerous chemicals, and it is not tested for fracking chemicals(7).

3. Oil extraction in California has an ugly track record of leaks and spills.

4. In a time of record drought, fracking uses a lot of water.

Fracking and fracking-enabled extreme oil extraction use over 4 billion gallons of water annually(5).

5. Fracking is likely to cause earthquakes in California.

The risk of fracking wastewater injection triggering significant earthquakes may be as great or greater than in other parts of the country(11). California’s wastewater disposal wells are closer to the surface and closer to active faults(12). The study also found a likely link between injection well activity and a cluster of earthquakes in the Santa Maria basin(13).

These threats include: habitat loss, spread of invasive species, contamination of aquatic environments, noise and light pollution, and vehicle traffic(14). The San Joaquin Valley – where the majority of fracking in California occurs – is home to 143 federally listed species, candidates and species of concern(15). Fracking activity also overlaps with critical habitat for the California condor and steelhead salmon(16).

7. Around half a million people in California live within one mile of a well that has been fracked or otherwise stimulated.

The closer residents live to fracking wells, the more elevated their exposure risk to toxic air contaminants(17). Studies show the most significant public health risks – including adverse birth outcomes and increased cancer risk – occur within half a mile from active oil and gas development (18,19). In the Los Angeles basin alone, there are 20 schools, 39 daycare centers, 27 elderly homes, and 128,000 people within a half mile of a fracked or otherwise stimulated well(20). In Los Angeles in particular, oil and gas development clearly occur in low-income communities and communities of color(21).

In federal waters, operators are allowed to discharge fracking wastewater directly into the ocean, despite the fact that there are no studies on the effects of fracking discharge on marine environments(24,25). Lab tests suggest harm to marine life can result from exposure to wastewater discharge(26). Lack of data on the toxicity of 31 of the 48 chemicals used in offshore fracking is also a significant problem(27).

10. What we don’t know about fracking in California is frightening.

Oil companies are profiting off of a massive science experiment in which our health, air, water, and environment are the guinea pigs. The CCST report concludes that the sheer number and toxicity of chemicals used in fracking and extreme extraction fluids make it impossible to quantify the risks to the environment and human health(28).

9 California Council on Science and Technology. An Independent Scientific Assessment of Well Stimulation in California. Vol. III Case Studies of Hydraulic Fracturing and

28 CCST Vol. II Pg. 437
Add Your Comments
LATEST COMMENTS ABOUT THIS ARTICLE
Listed below are the latest comments about this post.
These comments are submitted anonymously by website visitors.