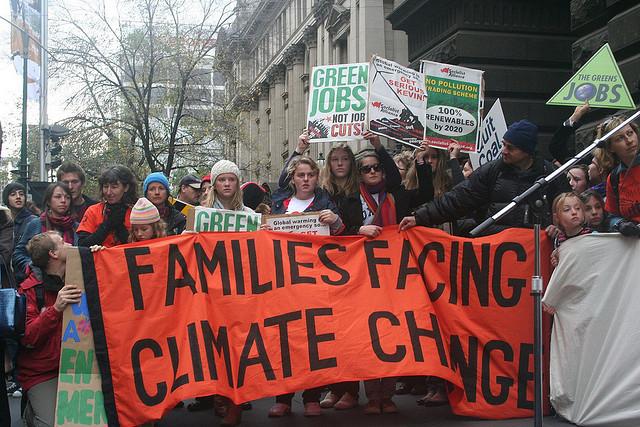 The petition (PDF) was brought by eight children and their legal guardians for a Department rule to recommend to the State Legislature an effective emissions reduction trajectory that is based on best available climate science, and will achieve safe atmospheric concentrations of carbon dioxide by 2100.

The petition for rule making was lodged with the Ecology Department in June 2014, but was denied by the Department in August 2014, which provided no argument disputing the scientific arguments in the children's petition. The Children lodged an appeal which was heard by Judge Hollis.

“The effect of this decision is that for the first time in the United States, a court of law has ordered a state agency to consider the most current and best available climate science when deciding to regulate carbon dioxide emissions,” said Andrea Rodgers of the Western Environmental Law Center, attorney for the youth petitioners. “The court directed Ecology to apply the agency’s own findings that climate change presents an imminent threat to Washington and demands immediate action. The ball is now in Ecology’s court to do the right thing and protect our children and future generations.”

The petitioners clearly stated that The State of Washington has a constitutional obligation to protect and manage its natural resources for its citizens under the Public Trust Doctrine, taking into account the Washington Constitution. Under the Greenhouse Gas Emission Limits Statute the Ecology Department are required to make recommendations and the rule for limiting greenhouse gas emissions according to the best available science.

"Ecology suggests no change in greenhouse gas reduction standards until after an international climate conference scheduled in Paris in December 2015, thus delaying action for at least a year from the date of the report or one year and five months after the report’s original due date. Neither in its briefing nor in oral argument of this appeal did the Department seek to justify this suggested delay. The report itself states that after the Paris conference Washington would be better informed how the state’s limits should be adjusted."

The youth petitioners were able to bring the case with the help of Our Children's Trust, an Oregon-based nonprofit engaged in a youth-driven wide legal campaign to establish the right to a healthy atmosphere and stable climate.

“This is a decision of immense national significance,” said Julia Olson, executive director of Our Children’s Trust, the nonprofit spearheading similar cases around the country. “Judge Hill acknowledges the urgent and dire acceleration of global warming, refuses to accept any more bureaucratic delay, and mandates that the State consider and act in just two weeks time on the youth’s scientific evidence that atmospheric levels of carbon dioxide must be reduced to 350 ppm. This judge understands the role of the judiciary to enforce citizen’s rights to fair evaluation of their grounded petitions and the critical urgency that government act substantively and without delay to protect the state’s resources and the children who depend on them.”

One of the petitoners, 13 year old Zoe Foster said of the decision, “Kids understand the threats climate change will have on our future. I’m not going to sit by and watch my government do nothing. We don’t have time to waste. I’m pushing my government to take real action on climate, and I won’t stop until change is made."

Zoe is already an accomplished environmental advocate and believes that climate change should be taught to the youth in school. She is a member of the Plant-For-The-Planet club at school, participating in planting days and beach cleanups, helped make props at an Earth Day march for children, trained other students as Ambassadors for Climate Justice, and met with legislative staff from the Washington government on climate change. Zoe has already engaged in public education on the risks and impacts of climate change speaking to the City Council Energy and Environment Committee and at the Governor’s CLEW hearings in Seattle and Olympia, the Keystone XL vigil, the Climate Reality Project NW retreat, and rallies at the EPA and Army Corps of Engineers.

The Court ordered that the Department of Ecology reconsider it's denial of the Youth petition for Rulemaking, and that the Department report back to the court no later than July 8, 2015 on whether it intends to amend or affirm it's decision regarding the youth petition. If the decision is to amend, then the court will set a status conference for continued hearing of the case.

The ruling may give impetus for Washington Governer Jay Inslee to take action as well, after the state legislature failed to pass his climate package.

The successful win in court comes a day after a Dutch district court ruled in favour of nearly 900 Dutch citizens who sued the Netherlands Government to increase emissions to a level supported by the best scientific advise. The court ordered the Government should cut emissions a minimum of 25 percent by 2020 in accordance with IPCC recommendations for industrial countries.

§Wrong Ruling
by Randy Dutton
Friday Nov 20th, 2015 11:09 AM
My Interpretation of Court Ruling: Washington State must immediately halt the use of biobased ethanol in the fuel supply. whereby the ethanol is produced from fertilizer grown feedstock. It is well established that 3% of all fertilizer used to grow crops goes into the air as N2O, a global warming gas 296 times more potent as CO2. Further, it is well documented that ethanol in the fuel supply damages or destroys many of the open-cycle engines in use (also from personal experience). Such equipment, when damaged, can operate less efficiently, dramatically increasing exhaust pollution; and when destroyed, can require the owner to replace with a new piece of equipment, which puts more stress on Earth’s resources. Such discarded equipment puts further strain on our landfills. When used in vehicle engines, it has been established by extensive testing by America’s vehicle manufacturers that half the cars tested were damaged by E15, partly because many exhaust catalytic converters were overheated by the ethanol’s extra oxygen. Furthermore, in 2008 when I ran for the state legislature, a WA Dept of Ecology official personally told me that any more than 2% ethanol in the fuel supply and Seattle exceeds the EPA Ozone Attainment Levels. The American Heart Association has publicly declared that ethanol in the fuel will greatly increase the deaths by respiratory illness.

As a timber grower, I know timber thrives with increased carbon dioxide.