Add an Event
Newswire
Calendar
Features
Home
Donate
From the Open-Publishing Calendar
From the Open-Publishing Newswire
Indybay Feature
Publish to Newswire
Add an Event
Related Categories: International | Environment & Forest Defense
Dutch Court orders Nethelands to cut climate change emissions by 25 percent by 2020
by John Englart (Takver)
Wednesday Jun 24th, 2015 4:33 AM
A Dutch court in a landmark legal case brought by 886 citizens has just handed down a verdict that the Netherlands Government has the legal duty of care and human rights obligation to take effective measures against climate change. Further, the court ordered that a minimum 25% reduction of CO2 emissions, based on 1990 levels, must be accomplished by 2020 by the Dutch government in accordance with IPCC scientific recommendations for industrial countries. 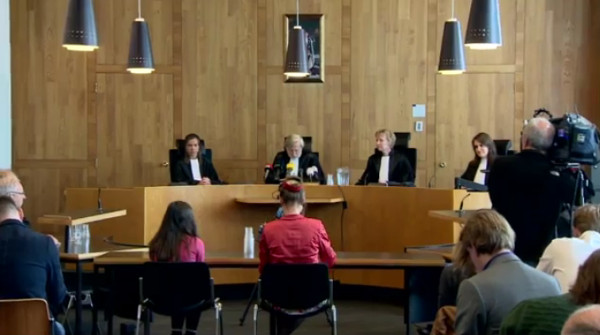 The Urgenda Foundation filed a lawsuit against the Dutch Government for not taking sufficient measures to reduce greenhouse gas emissions that cause dangerous climate change. According to the Urgenda website, it "is the first case in Europe in which citizens attempt to hold a state responsible for its potentially devastating inaction. It is also the first case in the world in which human rights are used as a legal basis to protect citizens against climate change."

The case was initiated in November 2012 with a letter calling on the Government to take meaningful action to reduce emissions. At the same time the call went out for Dutch citizens to support the case by becoming co-plaintiffs.

The case was formally filed in November 2013 with 886 co-plaintiffs. The case and arguments were heard by the District Court at the Hague on 14 April 2015.

The Dutch citizens were arguing that their government must implement policies to reduce emissions by between 25% and 40% below 1990 levels by 2020. This was the target for developed nations – established by the Intergovernmental Panel on Climate Change (IPCC) to create a 50% chance of avoiding a dangerous 2C rise in global temperatures.

The court outlined that based on current climate policies the Netherlands will cut emissions by 17 per cent by 2020, from 1990 levels.

The Court ordered that the Government has a duty of care and should implement policies that result at the minimum in a 25 per cent reduction of greenhouse gas emissions on 1990 levels by 2020.

An important part of the case is that under human rights law the court found that the Dutch Government has a duty of care to it's citizens to enact climate policies that meet the country's proportional share in preventing a global warming of more than 2 degrees Celsius. The two degree limit, a line not to be crossed to avoid dangerous climate impacts, was agreed by countries meeting at the UNFCCC Cancun Climate negotiations in 2010.

A legal summary of the plaintiff case was published in 2014 in the Utrecht Journal of International and European Law by Roger Cox: The Liability of European States for Climate Change.

According to Greenpeace's Jasper Teulings, as reported by the BBC, "It shifts the whole debate....Other cases are pending in Belgium and the Philippines. This is the start of a wave of climate litigation."

"This is a great victory — the judge said exactly what we wanted and had the courage and wisdom to say to the government 'you have a duty of care toward your citizens,'" said Marjan Minnesma, director of Urgenda, the group that filed the case, reported the New York Times.

“All the plaintiffs are overjoyed by the result. This makes it crystal clear that climate change is a huge problem that needs to be dealt with much more effectively, and that states can no longer afford inaction. States are meant to protect their citizens, and if politicians will not do this of their own accord, then the courts are there to help,” says Marjan Minnesma, who in 2013 initiated this case against the Dutch State with a team of lawyers and nine hundred co-plaintiffs. “It’s all up to the State now. Luckily, sustainable solutions are ripe for the picking.”

The Government has the option to appeal the ruling to a higher court.

Groundbreaking verdict
The State has a legal obligation to protect its citizens, and has therefore been required by the court to take the necessary precautions. The court is demanding that the Dutch government do what the government itself has already deemed necessary in order to avert dangerous climate change. The court is ordering the Netherlands to reduce CO2 emission by a minimum of 25% (compared to 1990) by 2020, while current ambitions are hovering at 16%. Climate change measures are feasible and affordable. Denmark and Germany are already on course to cut 40% of their CO2 emissions by 2020. In its defense, the State itself has even said that it still sees plenty of room to reduce emissions. The judge’s verdict is a serious breakthrough, according to Urgenda.

Internationally justified
Not just Urgenda and its co-plaintiffs have been eagerly awaiting this verdict, but so have UNFCCC negotiators, citizens in countries who have pending suits against their states (e.g. Belgium), or are currently preparing one (e.g. Norway). “Millions of people that are already suffering the consequences of climate change are hoping that we, the people that have caused the emissions and have the means to reduce them, will intervene while there is still time”, says Minnesma. “Those people can now, with our verdict in their hands, start their own climate cases.” These lawsuits are supported by the Oslo Principles, which holds that states have the legal obligation to avert dangerous climate change.

Dutch emissions
The Netherlands cannot solve the climate crisis by itself, but it certainly can do its fair share. Historically, The Netherlands is among the largest per capita emitters of the world. The science is crystal clear: we need to prevent the earth’s temperature from rising more than two degrees. Currently, the earth is headed for a temperature rise of 4, or even 6, degrees Celsius, which will mean an unlivable planet.

http://takvera.blogspot.com.au/2015/06/dut...
Add Your Comments
Support Independent Media
We are 100% volunteer and depend on your participation to sustain our efforts!