Photo of press conference by Californians Against Fracking at the State Capitol on January 28 by Dan Bacher. On February 7 thousands of Californians will converge in Oakland – Brown’s home town – for the "March for Real Climate Leadership." For more information, go to:http://marchforclimateleadership.org 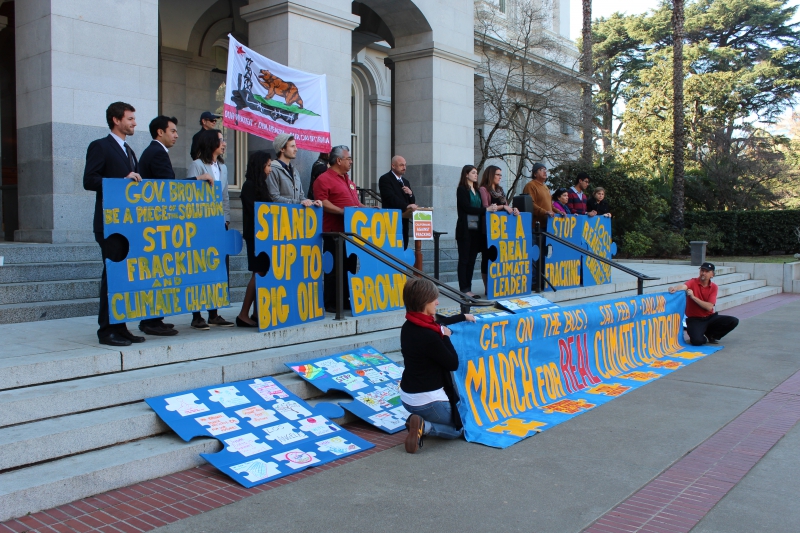 The oil industry continued its long reign as the top spender on lobbying in California in 2014, according to data just released by the California Secretary of State.

The Western States Petroleum Association (WSPA) led the list with $8.9 million spent on lobbying in 2014, nearly double what it spent in the previous year. WSPA spent $4.67 million in 2013.

WSPA apparently spent much of its money on stopping a fracking moratorium bill in the Legislature and trying to undermine California’s law to lower greenhouse gas emissions to 1990 levels by 2020.

“The winners of the 2014 lobbying competition are in – and the winner is... BIG OIL!’" said Stop Fooling California, an online and social media public education and awareness campaign that highlights oil companies’ efforts to mislead and confuse Californians. “Congratulations, Western States Petroleum Association and Chevron! No one has spent more on evil in California than you!"

The association spent a total of 4,009,178 lobbying state officials in the third quarter of 2014, a new quarterly record by WSPA. (http://calaccess.sos.ca.gov/Lobbying/Employers/Detail.aspx?id=1147195&session=2013&view=activity)

The Sacramento Bee pointed out that the "vast majority of the petroleum association’s spending on lobbying last year – about $7.2 million – was reported under a catch-all 'other' category that requires no detailed disclosure showing who benefited or how the money was spent." (http://www.sacbee.com/news/politics-government/capitol-alert/article9261986.html#storylink=cpy)

The oil industry has spent over $70 million on lobbyists in California since January 2009, according to a 2014 report written by Will Barrett, the Senior Policy Analyst for the American Lung Association in California. (http://www.lung.org/associations/states/california/advocacy/climate-change/oil-industy-lobbying-report.pdf)

The Western States Petroleum Association (WSPA) topped the oil industry spending with a total of $31,179,039 spent on lobbying since January 1, 2009 at the time of Barrett’s report. Chevron was second in lobbying expenses with a total of $15,542,565 spent during the same period.

Big Oil also exerts its power and influence by spending many millions of dollars every election season on candidates and ballot measures. For example, the oil industry dumped $7.6 million into defeating a measure calling for a fracking ban in Santa Barbara County and nearly $2 million into an unsuccessful campaign to defeat a measure banning fracking and other extreme oil extraction techniques in San Benito County during the November 2014 election. Chevron also spent $3 million (unsuccessfully) to elect “their” candidates to the Richmond City Council.

Not only does Big Oil spend millions every year on lobbying and campaign contributions, but it funds "Astroturf" campaigns to eviscerate environmental laws. Leaked documents provided to Northwest Public Radio, Business Week and other media outlets last year exposed a campaign by the Western States Petroleum Association to fund and coordinate a network of “Astroturf” groups to oppose environmental laws and local campaigns against fracking in California, Washington and Oregon.

This network was revealed in a PowerPoint presentation from a Nov. 11 presentation to the Washington Research Council, given by Catherine Reheis-Boyd, WSPA President. (https://www.indybay.org/newsitems/2014/12/12/18765457.php)

Oil and chemical industry representatives also further exert their power and influence by serving on state and federal regulatory panels. In one of the most overt conflicts of interest in recent California history, WSPA President Catherine Reheis-Boyd served as the Chair of the Marine Life Protection Act Blue Ribbon Task Force to create questionable "marine protected areas" in Southern California. (http://www.dfg.ca.gov/marine/mpa/brtf_bios_sc.asp)

She also served on the task forces for the Central Coast, North Central Coast and North Coast, as well as on a NOAA federal marine protected areas panel from 2003 to 2014.

The so-called "marine protected areas" created under the MLPA Initiative fail to protect the ocean from fracking, offshore oil drilling, pollution, military testing, corporate aquaculture and all human impacts on the ocean other than fishing and gathering.

Not only did these alleged "Yosemites of the Sea" fail to protect the ocean, but they violate the traditional fishing and gathering rights of the Yurok Tribe and other Indian Nations and are based on terminally flawed and incomplete science. In fact, Ron LeValley, the Co-Chair of the MLPA Initiative Science Advisory Team for the North Coast, is currently in federal prison for conspiracy to embezzle $852,000 from the Yurok Tribe.

The millions Chevron and other oil companies have spent on lobbying, campaign contributions and setting up “Astroturf” groups promoting the oil industry agenda are just chump change to Big Oil. The five big oil companies – BP, Chevron, Conoco-Phillips, Exxon Mobil and Shell – made a combined total of $93 billion in 2013.

Even with sliding oil prices, the big five oil companies - BP, Chevron, ConocoPhillips, Exxon Mobil, and Shell - made $16.4 billion in the last quarter of 2014 and $89.7 billion for the entire year, according to the Center for American Progress. (https://www.americanprogress.org/issues/green/news/2015/02/03/105935/sliding-oil-prices-still-yield-90-billion-2014-for-big-oil/)