Add an Event
Newswire
Calendar
Features
Home
Donate
From the Open-Publishing Calendar
From the Open-Publishing Newswire
Indybay Feature
Publish to Newswire
Add an Event
Related Categories: California | Central Valley | Environment & Forest Defense | Government & Elections
Western States Petroleum Association's Astroturf Campaign Exposed!
by Dan Bacher
Friday Dec 12th, 2014 8:56 AM
The PowerPoint deck from a presentation by WSPA President Catherine Reheis-Boyd lays out the construction of what environmentalists contend is an elaborate ‘Astroturf' campaign by WSPA, the the oldest petroleum trade association in the United States and the most powerful corporate lobbying organization in Sacramento. 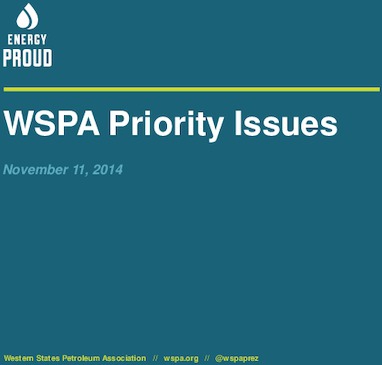 Leaked documents provided to Northwest Public Radio, Business Week and other media outlets have exposed a campaign by the Western States Petroleum Association to fund and coordinate a network of “Astroturf” groups to oppose environmental laws and local campaigns against fracking in California, Washington and Oregon.

This network was revealed in a PowerPoint presentation from a Nov. 11 presentation to the Washington Research Council, given by Catherine Reheis-Boyd, President of the Western States Petroleum Association (WSPA) and former Chair of the Marine Life Protection Act (MLPA) Initiative Blue Ribbon Task Force to create so-called “marine protected areas” in Southern California.

“The Powerpoint deck details a plan to throttle AB 32 (also known as the California Global Warming Solutions Act of 2006) and steps to thwart low carbon fuel standards (known as LCFS) in California, Oregon, and Washington State,” revealed Stop Fooling California, an online and social media public education and awareness campaign that highlights oil companies’ efforts to mislead and confuse Californians. “Northwest Public Radio appears to have been the first to confirm the authenticity of the deck, which Bloomberg Businessweek did as well, with WSPA spokesman Tupper Hull.” (http://www.stopfoolingca.org/2014/12/leaked-the-oil-lobbys-conspiracy-to-kill-off-californias-climate-law/)

Specifically, the PowerPoint deck from a presentation by WSPA President Catherine Reheis-Boyd lays out the construction of what environmentalists contend is an elaborate ‘Astroturf' campaign by WSPA, the the oldest petroleum trade association in the United States and the most powerful corporate lobbying organization in Sacramento.

"Astroturfing" is the practice, used often by powerful corporate interests, of masking the sponsors of a message or organization to make it appear as though it originates from and is supported by grassroots participant(s).

“Groups with names such as Oregon Climate Change Campaign, Washington Consumers for Sound Fuel Policy, and AB 32 Implementation Group are made to look and sound like grassroots citizen-activists while promoting oil industry priorities and actually working against the implementation of AB 32,” Stop Fooling California explained.

A review of the documents (https://www.indybay.org/uploads/2014/12/12/washington_research_council_-_cathy_reheis-boyd.pdf) confirms the claims by Stop Fooling California. The most controversial slide (9) shows a large circle with a smaller circle labeled "WSPA" in the center, surrounded by circles representing the organization's “coalitions and campaigns." These include the Californians for Energy Independence, Californians Against Higher Oil Taxes, Concerned Mineral Owners of California, Kern Citizens for Energy, and “Local Hydraulic Fracturing Campaigns,” all described as “upstream" groups.

That’s a total of 16 "Astroturf" groups and campaigns orchestrated and funded by WSPA and its allies!

In the same slide, Reheis-Boyd discloses:

“In 2014, WSPA has activated a significant numbers of campaigns and coalitions that have contributed to WSPA’s advocacy goals and continue to respond to aggressive anti-oil initiatives in the West.

Each campaign was structured to address specific state and local issues and provide an excellent opportunity for the petroleum industry to educate consumers and voters in all of WSPA’s five Western States.

WSPA has also invested in several coalitions that are best suited to drive consumer and grassroots messages for regulators and policy makers.”

The PowerPoint presentation also features a series of slides (3-8), entitled “the Worst of Times,” showing photos of activists at a variety of locations protesting against the Keystone Pipeline, against oil trains, for a fracking ban, and demanding climate justice. Photos of Bill McKibben of 350.org and Tom Steyer, billionaire philanthropist, are also included.

The rest of the slides (10 through 31) focus on the “Climate Change Campaigns” by WSPA in California, Oregon and Washington.

Reheis-Boyd responded to media exposure of the WSPA Astroturf campaign by claiming that the PowerPoint presentation wasn't really a "leaked" document - and then touted the organization's "transparency," just like she and her fellow "marine guardians" touted the alleged "transparency" of the MLPA Initiative process that she oversaw.

"I find it fascinating that a handful of gullible news reporters have been convinced this was a 'leaked' document that reveals WSPA’s secret formula for world domination," she claimed.

"The truth is, the presentation in question was given to a public gathering and provided to individuals who requested it – a regular transparent practice we employ at WSPA. The fact we are engaged in partnerships with a large array of business and consumer coalitions isn’t a secret to anyone familiar with our active engagement on behalf of our members in all of the states for which are responsible," the oil industry lobbyist contended.

Unfortunately, not one of the “reporters” who has covered the WSPA “Astroturf” scandal mentioned the even bigger scandal of how the same oil industry lobbyist who delivered the PowerPoint presentation oversaw the creation of fake “marine protected areas” in Southern California, in collaboration with state officials and corporate “environmental” NGOs. (http://www.dailykos.com/story/2014/11/26/1347674/-The-Biggest-Most-Censored-Environmental-Story-Big-Oil-s-Domination-of-California-Politics)

In one of the most overt conflicts of interest in California history, Catherine Reheis-Boyd, President of the Western States Petroleum Association, not only chaired the Marine Life Protection Act (MLPA) Initiative Blue Ribbon Task Force to create fake “marine protected areas” on the South Coast, but “served” on the task forces for the Central Coast, North Central Coast and North Coast from 2004 to 2012. (http://www.dfg.ca.gov/marine/mpa/brtf_bios_sc.asp)

Not only did she sit on the state task forces, but she also "serves" on a federal marine protected area panel.

In her role as “marine guardian,” Reheis Boyd and other members of the MLPA Blue Ribbon Task Force created a “network” of so-called “marine protected areas” that fail to protect the ocean from fracking, offshore oil drilling, pollution, corporate aquaculture, military testing and all human impacts other than fishing and gathering.

After hearing from dozens of speakers at task force meeting on November 11, 2009, Reheis-Boyd and the other panel members selected a controversial plan that would close fishing and gathering in many areas, including waters off Laguna Beach and Point Dume, but do nothing to stop pollution, fracking, oil drilling, military testing or other insults to the ocean in Southern California waters.

"We're not going to make everyone happy, but this has to be done," panel Chairwoman Catherine Reheis-Boyd told the LA Times in an interview before the vote. "It's agony to weigh the environmental goals against people's livelihoods, especially here in Southern California, where the urban/ocean interface is greater than anywhere else in the nation." http://articles.latimes.com/2009/nov/11/local/me-fishing-ban11

“It's not perfect, but it's something we hope we can live with,” said Reheis-Boyd, according to Sign on San Diego the same day. (http://www.signonsandiego.com/news/2009/nov/11/panel-expands-sanctuaries-off-county-coast/)

Now not only are we forced to “live with” these fake “marine protected areas,” but we are forced to "live with" the increasingly prominent role that Reheis-Boyd and the oil industry plays in California politics. Reheis-Boyd's rise to power was helped tremendously by the greenwashing of her position on the task forces by Brown and Schwarzenegger administration officials and representatives of corporate "environmental" NGOs, who continually gushed that the corrupt process was "open, transparent and inclusive."

The creation of Astroturf groups and the hijacking by the oil industry of what passes for “marine protection” in California take place in the context of the increasing money and influence the Western States Petroleum Association and the oil industry wields over state, federal and local government officials.

The oil industry has spent over $70 million on lobbyists in California since January 2009, including record amounts of money spent during the third quarter of 2014, according to a recent report written by Will Barrett, the Senior Policy Analyst for the American Lung Association in California. (http://www.lung.org/associations/states/california/advocacy/climate-change/oil-industy-lobbying-report.pdf)

WSPA, the most powerful corporate lobbying organization in Sacramento, topped the oil industry spending with a total of $31,179,039 spent on lobbying since January 1, 2009. Chevron was second in lobbying expenses with a total of $15,542,565 spent during the same period.

And this doesn’t include spending on ballot measures or the recent election, including Chevron spending $3 million (unsuccessfully!) to elect “their” candidates to the Richmond City Council. Big Oil also dumped $7.6 million into defeating a measure calling for a fracking ban in Santa Barbara County and nearly $2 million into an unsuccessful campaign to defeat a measure banning fracking and other extreme oil extraction techniques in San Benito County.

People need to understand that the millions Chevron and other oil companies have spent on lobbying, campaign contributions and setting up “Astroturf” groups promoting the oil industry agenda are small change to Big Oil. The five big oil companies – BP, Chevron, Conoco-Phillips, Exxon Mobil and Shell – made a combined total of $93 billion in profits last year. Big Oil’s estimated profits in 2014 to date are over $88 billion.
Add Your Comments
Support Independent Media
We are 100% volunteer and depend on your participation to sustain our efforts!