Add an Event
Newswire
Calendar
Features
Home
Donate
From the Open-Publishing Calendar
From the Open-Publishing Newswire
Indybay Feature
Publish to Newswire
Add an Event
Related Categories: East Bay | Police State & Prisons
On the Ferguson blockades - poster
by anon
Thursday Nov 27th, 2014 4:04 PM
Nine Points on Why it is Necessary to Block Everything - with 11x17 poster version attached, on Ferguson and the blockades that have spread across the country 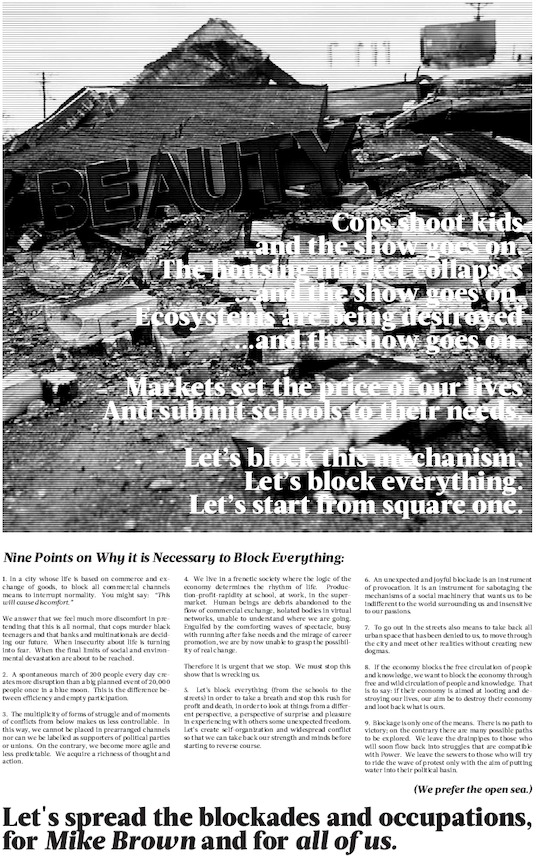 NINE POINTS ON WHY IT IS NECESSARY TO BLOCK EVERYTHING

1. In a city whose life is based on commerce and exchange of goods, to
block all commercial channels means to interrupt normality. You might
say: “This will cause discomfort.”

We answer that we feel much more discomfort in pretending that this is all
normal, that cops murder black teenagers and that banks and multinationals
are deciding our future. When insecurity about life is turning into fear. When
the final limits of social and environmental devastation are about to be reached.

2. A spontaneous march of 200 people every day creates more disruption
than a big planned event of 20,000 people once in a blue moon. This is
the difference between efficiency and empty participation.

3. The multiplicity of forms of struggle and of moments of conflicts from
below makes us less controllable. In this way, we cannot be placed in
prearranged channels nor can we be labelled as supporters of political
parties or unions. On the contrary, we become more agile and less
predictable. We acquire a richness of thought and action.

4. We live in a frenetic society where the logic of the economy determines the
rhythm of life. Production-profit-rapidity at school, at work, in the
supermarket. Human beings are debris abandoned to the flow of commercial
exchange, isolated bodies in virtual networks, unable to understand where we
are going. Engulfed by the comforting waves of spectacle, busy with running
after false needs and the mirage of career promotion, we are by now unable
to grasp the possibility of real change. Therefore it is urgent that we stop.
We must stop this show that is wrecking us.

5. Let's block everything (from the schools to the streets) in order to
take a breath and stop this rush for profit and death, in order to look at things
from a different perspective, a perspective of surprise and pleasure in
experiencing with others some unexpected freedom. Let's create
self-organization and widespread conflict so that we can take back our
strength and minds before starting to reverse course.

6. An unexpected and joyful blockade is an instrument of provocation. It
is an instrument for sabotaging the mechanisms of a social machinery that
wants us to be indifferent to the world surrounding us and insensitive to
our passions.

7. To go out in the streets also means to take back all urban space that
has been denied to us, to move through the city and meet other realities
without creating new dogmas.

9. Blockage is only one of the means. There is no path to victory; on the
contrary there are many possible paths to be explored. We leave the
drainpipes to those who will soon flow back into struggles that are compatible with
Power. We leave the sewers to those who will try to ride the wave of
protest only with the aim of putting water into their political basin.

We prefer the open sea.

Let's spread the blockades and occupations, for Mike Brown and for all of us.