Add an Event
Newswire
Calendar
Features
Home
Donate
From the Open-Publishing Calendar
From the Open-Publishing Newswire
Indybay Feature
Publish to Newswire
Add an Event
Related Categories: Santa Cruz Indymedia | Health, Housing & Public Services | Police State & Prisons
Stay-Away Stupidity Not on Tuesday's 11-25 Council Agenda
by Robert Norse (rnorse3 [at] hotmail.com)
Monday Nov 24th, 2014 12:49 PM
The second and final reading of the vastly expanded MC 13.08.100 (officer-initiated Stay Away Orders for a day, a week, a month, six months,and a year) won't be on tomorrow's afternoon City Council agenda. This cancerous expansion of cop and ranger powers is likely to appear, Councilmember Posner advised me by phone, on the December 9th Agenda. A more limited Stay-Away law has already impacted more than 600 people in the last year, mainly for homeless "crimes" such as sleeping, smoking, and being in a closed area. The December 9th item will be the Robinson-Lanes Council's parting slash at homeless people. 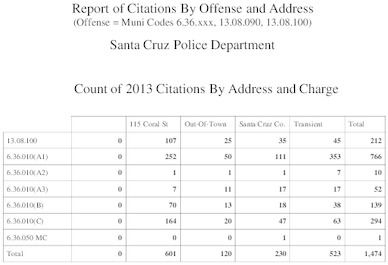 Download PDF (6.9KB)
MORE TOOLS FOR UNIFORMED TERRORISTS
The massively punitive Stay-Away ordinance seems to have been cooked up to give more terror tools to the SCPD and Parks and Recreation Department since several jails couldn't hold all the people ticketed in the last year for camping alone. The strategy is that of Take Back Santa Cruz, Santa Cruz Neighbors, the Downtown Association, and apparently higher-up's in the city staff--to make Santa Cruz not just "unwelcoming" but uninhabitable for poor people outside.

ANALYSIS STRIPS AWAY THE "PUBLIC SAFETY" PRETEXT
HUFF activist Raven Davis did an analysis of the Parks and Recreation citations since the one-day Stay-Away power was bestowed on the cops and rangers last year (see "Stay-Away From Human Rights ! An Activist Examines the Escalating Stay-Away Orders Law" at https://www.indybay.org/newsitems/2014/10/25/18763326.php). It demonstrated that overwhelmingly the targets were the homeless engaging in non-violent and often life-sustaining behavior (i.e. sleeping or camping). Police stats show large numbers of such harassment citations for the same "crimes". The bail to avoid court, last time I looked (it goes up steadily) was $156.

LISTEN TO THE IDIOCY YOURSELF ON LINE!
The audio and video of the ignored public comment and brief city council "discussion" of the pre-approved item is two hours, four minutes, and eleven seconds into the city's on-line archive at http://scsire.cityofsantacruz.com/sirepub/mtgviewer.aspx?meetid=571&doctype=AGENDA (Item #13).

Recently the police department released a summary of figures regarding its citations for the last year around the main "crimes" for which P & R cited and stay-away-ed folks under the earlier Stay-Away law passed last year (Item 16 at http://scsire.cityofsantacruz.com/sirepub/mtgviewer.aspx?meetid=461&doctype=AGENDA). At the same time the policepower-expanding "Disorderly Conduct" law was also passed (on the same agenda Item).

MASSIVE TICKETING AND FOCUSED HARASSMENT OF THE HOMELESS
Police stats showing the massive number of harassment tickets against the homeless as well as stay-away orders are included below. The Parks and Recreation records are described at https://www.indybay.org/newsitems/2014/10/25/18763326.php .

Facts revealed by clear bias against homeless survival behavior exposed in the statistics apparently meant nothing to the P & R "homeless removal squad" and its enablers on the City Council. Council members refused to acknowledge that sleeping, smoking, and being in a "closed area" after dark because they declined to acknowledge that the "crimes" had nothing to do with public safety. Councilmembers denied they targeted the homeless (who wants to admit being a bigot?).

DRIVE AWAY THOSE "SLEEP CRIMINALS" BY JACKETING THEM WITH THE "PUBLIC SAFETY HAZARD" LABEL
They also declined to introduce an amendment that would limit Stay-Away orders to real crimes against people and property. Such a pre-court cop-selected punishment process would still be unconstitutional and abusive--particularly as if it's retroactive and discretionary as proposed. But this failure to focus on real crimes and insistence on expanding broad discretionary harassment authority makes the real agenda clear.

Councilmember Posner has so far refused to commit himself to presenting such an amendment unless Lane joins him. Lane voted for the expanded "get out and stay out" power under pressure from Mayor Robinson. Street performers continue to await is agreement to have regular meetings to deal with police harassment and performer input regarding the new Performance Cages on Pacific Avenue.
§
by Robert Norse Monday Nov 24th, 2014 12:49 PM 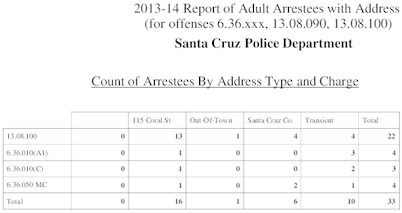 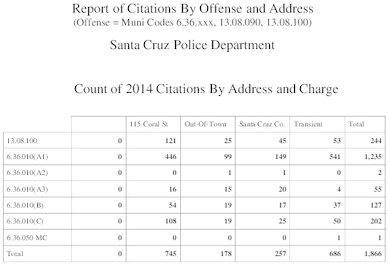 §Tangled Labeling
by Robert Norse Tuesday Dec 9th, 2014 12:46 PM
All three tables--citations for 2013, citations for 2014, and arrests for 2013-14---are printed above. The 2014 citations table is mislabeled 2014 in the bold letter that introduces the section. My apologies. Pay attention to the labeling on the tables themselves.
Add Your Comments
LATEST COMMENTS ABOUT THIS ARTICLE
Listed below are the latest comments about this post.
These comments are submitted anonymously by website visitors.