Add an Event
Newswire
Calendar
Features
Home
Donate
From the Open-Publishing Calendar
From the Open-Publishing Newswire
Indybay Feature
Publish to Newswire
Add an Event
Related Categories: Santa Cruz Indymedia | Health, Housing & Public Services | Police State & Prisons
Stay-Away From Human Rights ! An Activist Examines the Escalating Stay-Away Orders Law
by Raven Davis (posted by Norse)
Saturday Oct 25th, 2014 8:51 PM
HUFF (Homeless United for Friendship & Freedom) activists Raven Davis and Maya Iverson spent many hours culling through citations and stay-away orders from the Parks and Recreation Department for the last year and a half. Their results show a pattern of homeless harassment and suggest very few of the citations or stay aways are for real crimes that threaten anyone. Mostly infractions used to discourage and drive away homeless folks. The proposed escalation of penalties, Davis predicts, will be even more abusive.
Presented are some selections from Raven Davis's letter. The complete letter, the raw date, a spread sheet made of the data, and a follow-up letter are included below.


Dear Members of the City Council,

I’m writing to urge you against adopting the proposed amendment to section 13.08.100 of the Municipal Code Pertaining to Orders to Vacate Park Property. Data collected from the 2013-2014 Parks & Recreation citations shows that the adoption of this amendment will disproportionally affect homeless people. Furthermore, it also shows that claims of disruptive behavior interfering with proper usage of city parks and beaches presently have no grounds for substantiation. In light of this information, and the threats of civil suits that others are already planning (should this amendment be adopted), I implore you to look at the data yourselves.
...

...[A] small percentage (<1%) of the citations written by Park Rangers include charges for behavior that interferes with either Ranger duties or use of a city beach or park as described in ordinance 13.08.090 Disorderly Conduct on Park Property. In fact, nearly 100% of the citations written were for non-violent, non-disruptive infractions. The most cited infraction was 6.36.011 [Camping Prohibited] (c) - Setting-up Campsite – Anytime, at 23% of the total charges written. Combined with infractions for 6.36.010 [Camping Prohibited] (a) - Sleeping – 11 p.m. to 8:30 a.m. and 6.36.010 [Camping Prohibited] (b) - Setting-up Bedding – 11 p.m. to 8:30 a.m., charges for illegally camping on public property account for more than one third (38%) of all charges written by Park Rangers since January 2013. Following camping are infractions for 13.04.010 Limitations on Access and use of Public Property. This seems to be the result of homeless people taking refuge in off limits areas of public properties. The third most cited infraction was 9.50.050 Smoking on Public Property on Public Property. While secondhand smoke is certainly a health hazard and a deterrent for most people, smoking is generally not a disruptive or highly threatening activity.

As it turns out, 50% of these 1,166 citations were addressed to 115 Coral St., the Homeless Services Center. Another 19% were addressed to P.O. Boxes, marked for General Delivery, or labeled “Transient.” Given that these designations are often signifiers of homelessness, we can reasonable say that homeless people account for 69% of the citations written by Park Rangers between 2013 and the present. On top of being more likely to receive a citation at all, since the enactment of ordinance 13.08.100 of the Municipal Code Pertaining to Orders to Vacate Park Property homeless people (shelter residents, transient people, people with no residential address) are more likely to receive an order to vacate than an offender with a local address (within Santa Cruz County) or offenders with non-local addresses.

Given these facts, it is clear that if adopted the proposed amendment to 13.08.100 of the Municipal Code Pertaining to Orders to Vacate Park Property would be ineffectual at best and discriminatory at worst. I fully believe Parks & Recreation Director Shoemaker when she says that Park Rangers don’t have the time to perform the fun, educational parts of their jobs, because they have to spend their time writing citations. We have several laws that criminalize the necessary to life acts of homeless people and we have a large number of unsheltered homeless people trying to live in parks. Further criminalizing these citizens for their “behaviors” isn’t going to solve this problem. If anything, we need a moratorium on such ordinances; that way, neither Park Rangers nor homeless people will have to worry about all of these citations. It’s time to address the homelessness crisis in Santa Cruz full on and work toward some bigger, long-term solutions.

I think it’s remarkably ludicrous that such a group is not currently in place. Councilmembers Terrazas, Comstock, Bryant, and Mathews, if any of you actually care about the people of Santa Cruz, all of them, rich or poor, then you will change your vote and prevent the adoption of this amendment. And if you can get your heart back from whatever person or corporation bought it from you, you will team up with Vice Mayor Lane and Councilmember Posner to design a social service program, such as a Homelessness Task Force.

It is not okay that we have so many homeless people in Santa Cruz. I shouldn’t have to tell you this. You should see it on the streets and you should feel it in your bones; it should shake your core and disturb your soul simply because it is unfair, unjust, and unnecessary in a city, a county, a state, a country like ours. We can do better. We can take care of each other. Yet, for some reason, people like you don’t want to acknowledge the issue or put in the effort to fix it.

Did that offend you? I hope so, because I want you to make me look like a fool and prove me wrong in front of the entire city. Go ahead. Show me who you really are and stand up for something meaningful and urgent. Show me that the members of HUFF didn’t waste over 50 man-hours (32 from me alone) over the five days putting together this data and analysis, only for you to be too stupid or too shallow or too heartless to see the truth.

If you’ve managed to make it this far through the letter, thank you. Thank you for at least taking the time to read this. If you don’t despise me and have any questions, please let me know; I will answer them to the best of my ability. I do intend on making a statement at the hearing of this issue and will be prepared to answer questions at that time as well. 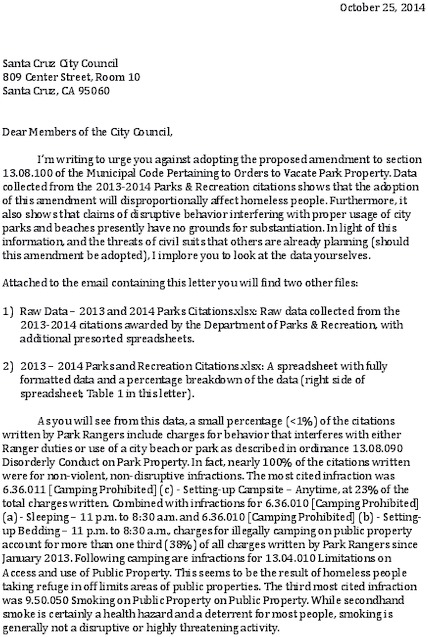 Download PDF (104.2KB)
NORSE NOTE: Davis's letter was compiled after several days of research and work. Parks and Recreation does not tabulate these figures. As far as we know, P and R Director Dannettee Shoemaker did not make them available except as bundles of citations for City Council members to count and review by hand. 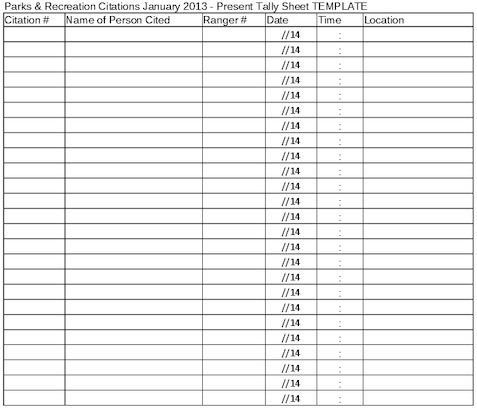 I want to apologize for not including an explanation of the raw data as there are some confusing aspects of it. For starters, the first spreadsheet in the raw data file is simply the template we used for entering the data directly from the citations. You will notice on the right hand side of the template a glossary of the terms and abbreviations we used to code the data and allow us to enter information into the spreadsheet faster.

Secondly, the 2013 and 2014 citation data are on separate spreadsheets (see the tabs at the bottom of the raw data template) as opposed to being consolidated. This is mostly for our own benefit as we reviewed each year's citations separately. Keeping them separate allowed us to better monitor our progress and do smaller analyses to check for consistency within the data.

Thirdly, none of the 2013 data includes names of recipients, Ranger badge numbers, dates, or times, while only some of the 2014 entries include that information. This is strictly due to time constraints. We started with the 2014 citations and initially included those fields of information, but found that it was too time consuming given the limited operation hours of the City Clerk's office. Thus, we switched to only entering the citation numbers, locations, charges, housing statues, and presence/absence of an order to vacate.

In the other Excel file, you will find a cleaned up version of all of this data (with the 2014 and 2014 data consolidated) where all abbreviations are spelled out, all charges are listed by their ordinance name and number, and important statistics are listed and highlighted on the right hand side. Once again, due to time and resource constraints, there are no breakdowns of the statistics for locations or variable interactions (i.e. charges by housing status, charges by location, etc).

Normally, a project like this would take over a month. We pulled off the background research and planning in two days, the data collection in 1 1/2 days, and the analysis with a report in another 1 1/2 days. We did the best we could in that time to bring you an adequate amount of valid and useful information.

Once again, if you have any questions, feel free to respond to this email.

Raven Davis
Add Your Comments
LATEST COMMENTS ABOUT THIS ARTICLE
Listed below are the latest comments about this post.
These comments are submitted anonymously by website visitors.