Newswire
Calendar
Features
Home
Donate
From the Open-Publishing Calendar
From the Open-Publishing Newswire
Indybay Feature
Publish to Newswire
Add an Event
Related Categories: California | Santa Cruz Indymedia | Education & Student Activism | Labor & Workers | Police State & Prisons
Riot Squads Return, Police Shut Down UCSC Campus on Second Day of UAW Strike
by Alex Darocy
Monday Apr 7th, 2014 3:23 PM
Graduate and undergraduate student demonstrators at UC Santa Cruz continued to face university intimidation during the second day of the UAW Unfair Labor Practices strike on April 3. During both days of the strike, riot police were outfitted and deployed at the west entrance of campus. Two individuals were arrested on April 3, which followed the 20 arrests that were made the previous day by University of California police. Additionally, the university continued to video tape legal strike activities. UAW Local 2865, the labor union that represents Graduate Student Workers and Teaching Assistants, said in a press release that the measures the university took were "simply an attempt to intimidate individuals involved in lawful conduct." 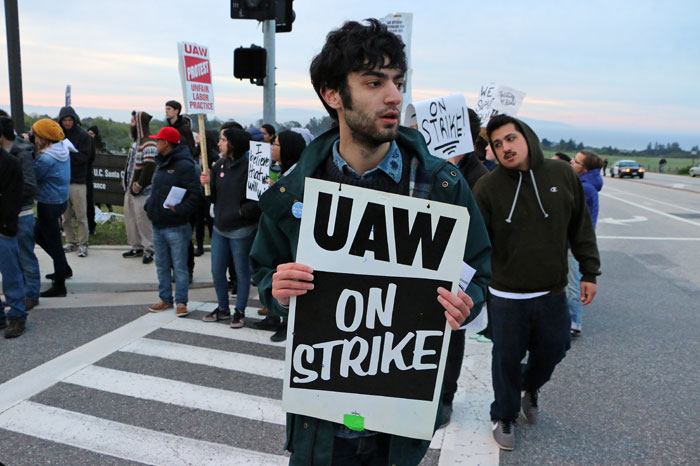 "Police officers were denying students their legal right to a moving picket when the crosswalk indicated they could walk, instead blocking pedestrians and allowing motor vehicles to cross the picket line." --UAW Local 2865

On April 3, demonstrators began gathering at the west entrance of UC Santa Cruz at 5:30 am, and shortly after that they formed a picket line in the cross walk in front of it. At the same time, the formation of a picket line at the main entrance of campus triggered a shut down of that entrance by police, which was maintained by the university for most of the day.

On the westside, officers with UCSC's police department were very "hands on" with the picket line, insisting with threat of arrest that individuals not cross the street for extended periods of time. When traffic was moderate, police allowed demonstrators to maintain the picket line, which they did legally by obeying the timing of the traffic lights and cross walk indicators.

At approximately 7am, an undergraduate woman was the first to be arrested when she and one police officer became involved in some sort of physical contact. UAW has reported that the student was being pushed by police officers when she told them to stop pushing her, and that their response was to arrest her.

A short while later, another undergraduate woman intentionally acted to have herself arrested as an act of solidarity with the first woman arrested, and so that she could keep her company in jail. (To view a video of their arrests, see: https://www.indybay.org/newsitems/2014/04/04/18753565.php )

Later in the morning a large group of demonstrators marched from the main entrance on Empire Grade road to the west entrance. This caused police to close off the road, which effectively shut down campus. When marchers arrived at the west entrance, a large rally was held along the cross walk in dispute.

Shortly after the rally was initiated, a black Santa Cruz Police Department transport vehicle arrived with a group of SCPD officers outfitted in riot gear, which included two of their department's grenadiers. SCPD's Deputy Chief of Police Rick Martinez was on hand all day at the strike assisting UCSC's Chief of Police Nader Oweis to direct police operations. SCPD's Lieutenant Dan Flippo was also on hand and outfitted in riot gear.

A small riot squad from the Santa Cruz County Sheriff's department arrived with the SCPD and were grouped with them.

The regular UCSC beat officers that had been directing traffic all day then retreated so that they could outfit themselves in riot gear. Additionally, a group of UC police officers from Berkeley were on hand, and one higher ranking officer from that group was directing some of the day's operations.

In total, 30 police officers or more were dressed in riot gear.

Two UCSC shuttle loop buses were parked and ready to be used to hold and transport arrestees if necessary. Many students at the demonstration expressed that they were particularly offended by the use of their shuttle buses for this purpose, and there was no clear plan in place for how students were to be processed after arrest. UCSC's Chief of Police Nader Oweis refused to answer any questions about the subject, and Director of Public Information Jim Burns said he did not know how long students would have to remain on the bus after being arrested.

Police set up audio equipment and prepared to issue a dispersal order for the group of approximately 200 people, which included several children.

After a short discussion, a large segment of the demonstrators decided to march through campus. As they marched away, the riot squads dissembled, and individuals at the west entrance again attempted to maintain the picket line. The marchers eventually rallied in Quarry Plaza, and then made their way to the UCSC police department for a short protest.

The police riot squads dispersed, and eventually those remaining at the west entrance marched to the main entrance of campus where demonstrators ended the picket at around 4pm.

In March, UAW Local 2865 voted to authorize the two-day strike to call for an end to the UC's intimidation of its members, and additionally to protest the UC's refusal to bargain over class size.

Day one of the strike was planned for union members to protest the specific Unfair Labor Practices that have occurred on their own campuses, and on day two all nine campuses would join together for a statewide strike.

UAW claims that in December the University refused to negotiate with the union over class size and TA/Student ratios, insisting it was not a mandatory subject of collective bargaining. The union has stated this is an Unfair Labor Practice because labor law makes clear, "the ratio of students to teacher, like the ratio of nurses to patients, is a mandatory subject of bargaining."

At the same bargaining session in December, the union claims management would not bargain over the subject of the 18 quarter limitation on teaching assignments. The union feels labor law is clear in this case as well, because management must negotiate over the terms of employment, "that affect workers’ eligibility for rehire or that limit the duration of their eligibility for employment." They have recently filed a charge with the Public Employee Relations Board (PERB) against management for their refusal to bargain over this.

In February, the union filed a charge claiming the director of the Writing Program at UCSC threatened a group of union members, “If you strike, you will not work in this program again.”

The union felt the threat was perceived as particularly severe to members because the Writing Program’s hiring process at UCSC is, "left almost entirely in the director’s hands".

Additionally, UAW was outraged that on November 20, graduate student workers were video taped at UCSC when they participated in a solidarity strike to support AFSCME members who were picketing on campus.

Statewide, UAW Local 2865 has filed a number of ULP charges against the UC.

In one example, UAW points to an email that UCLA administrators sent out to international student workers warning them that participation in the strike could result in the loss of work visas. Their work visas allow them to remain in the country legally. 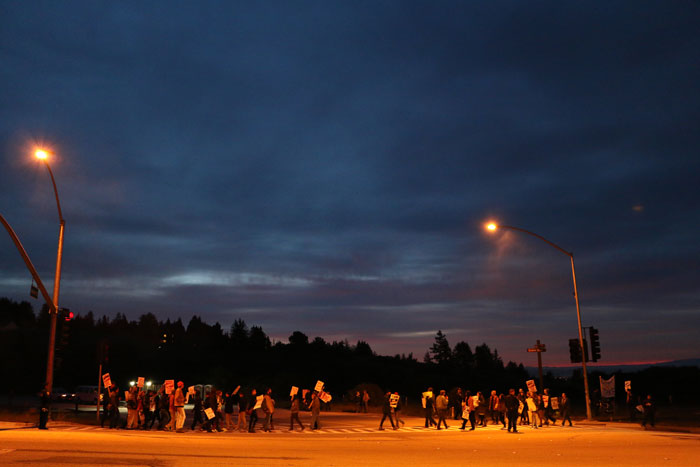 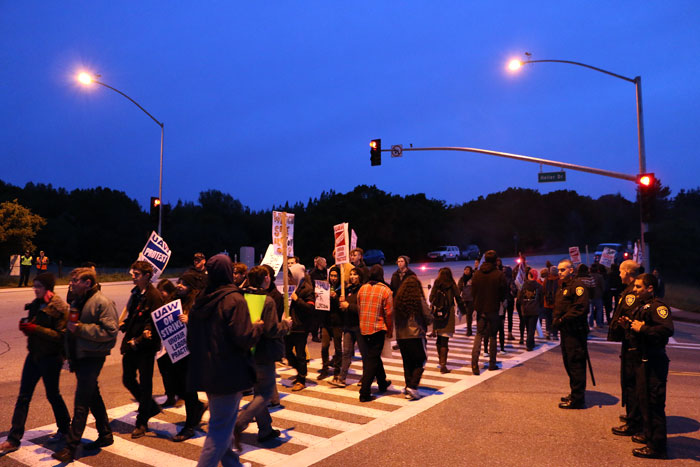 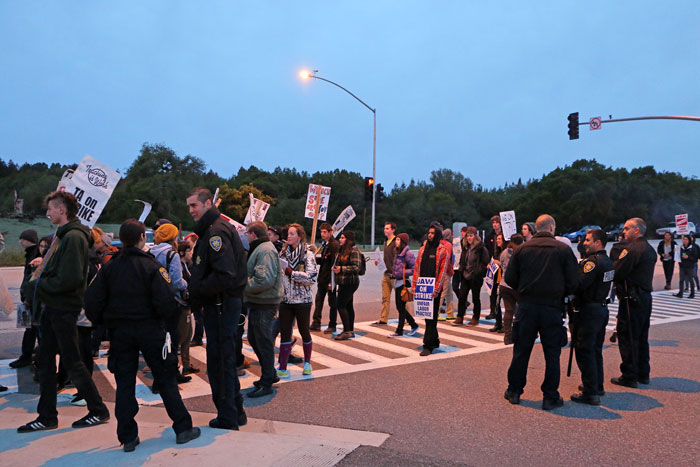 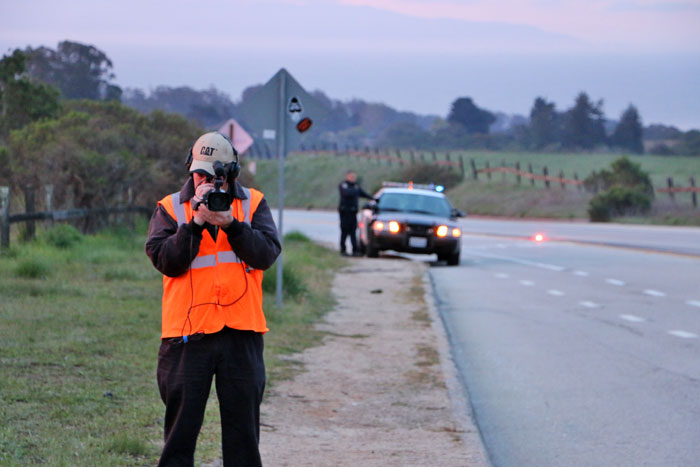 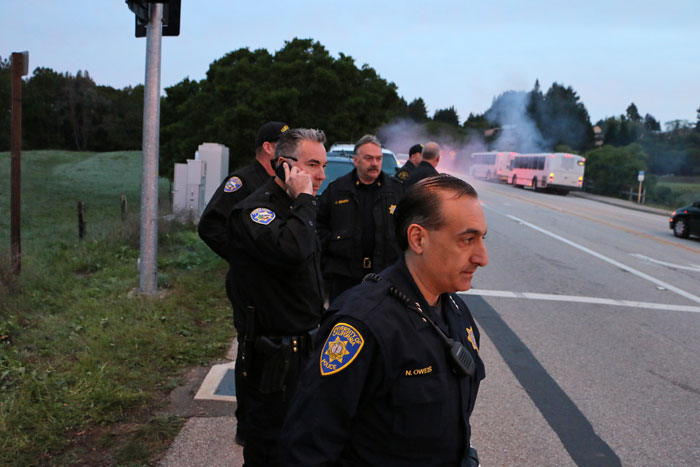 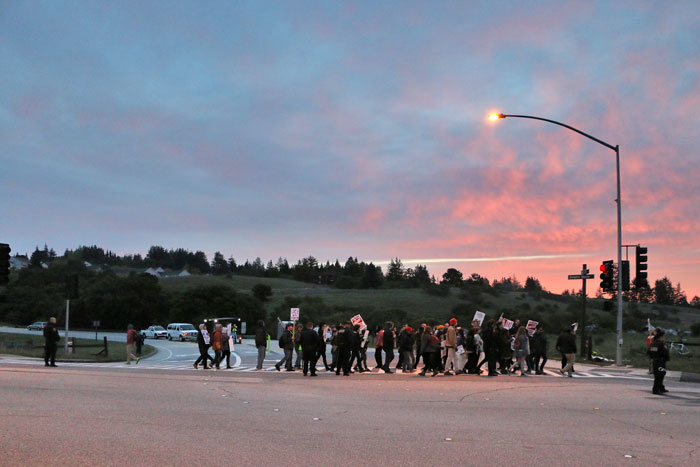 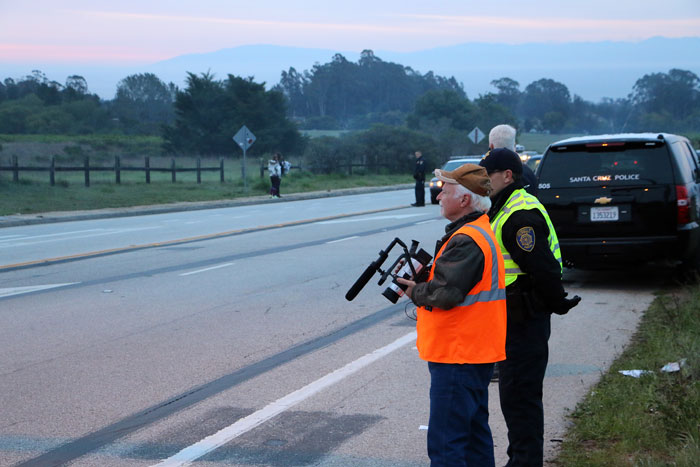 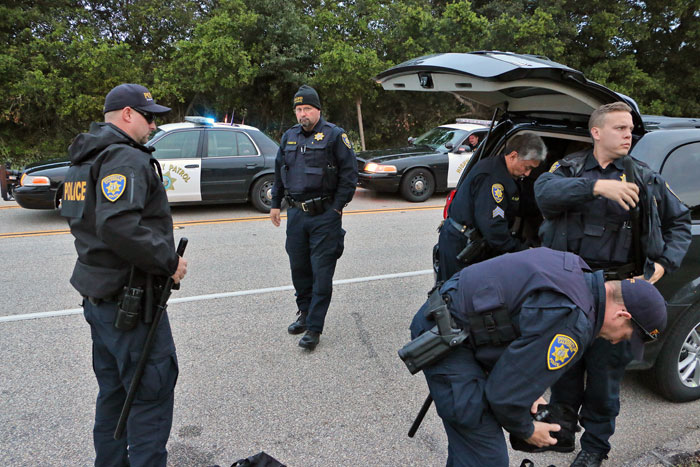 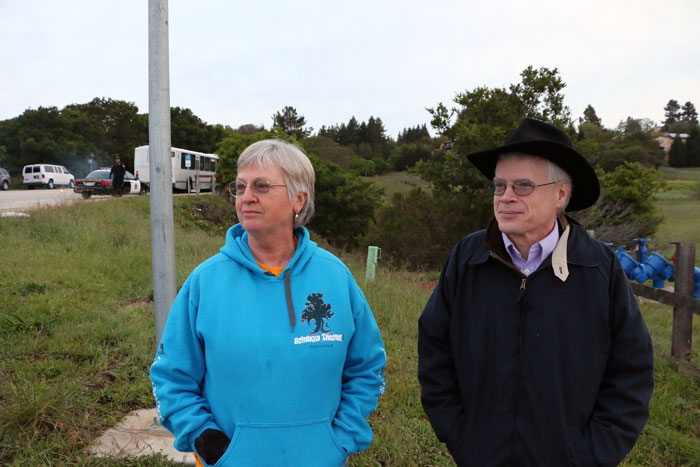 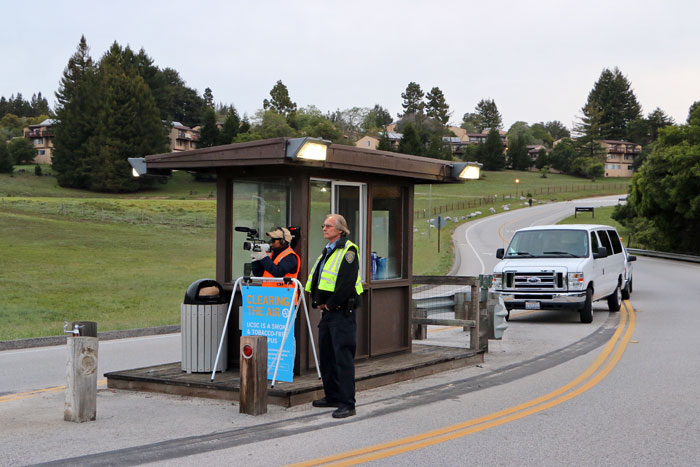 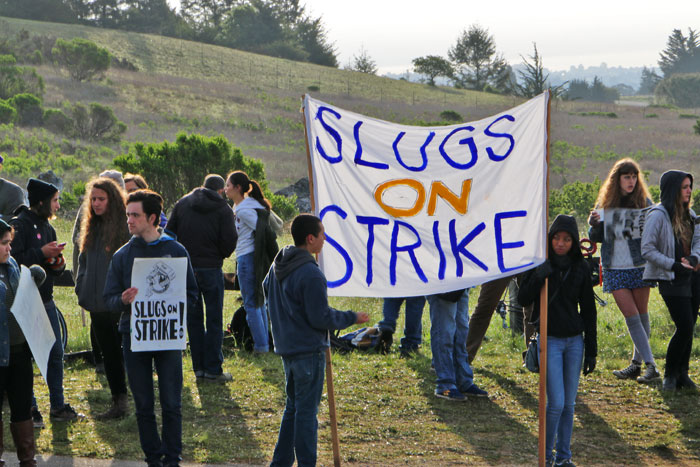 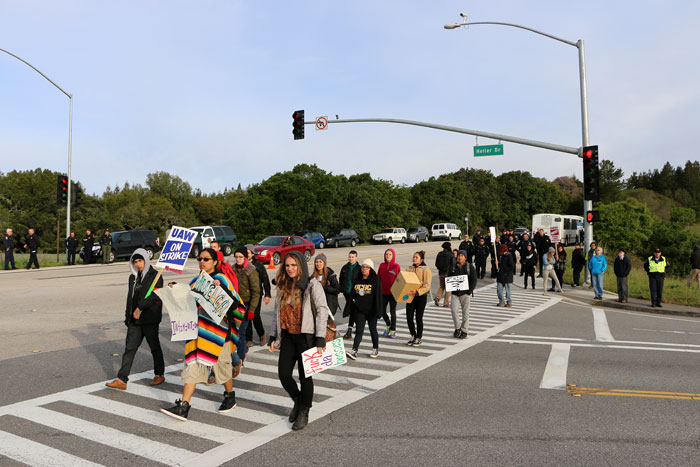 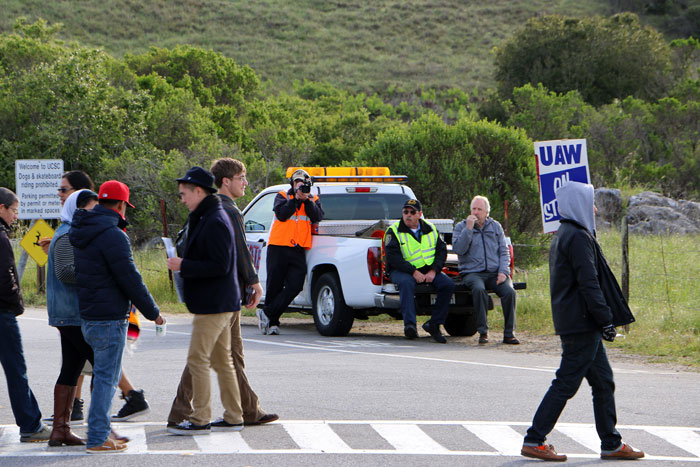 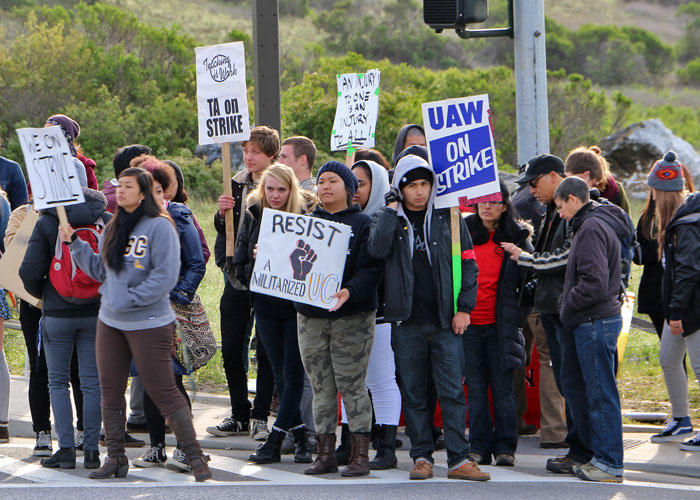 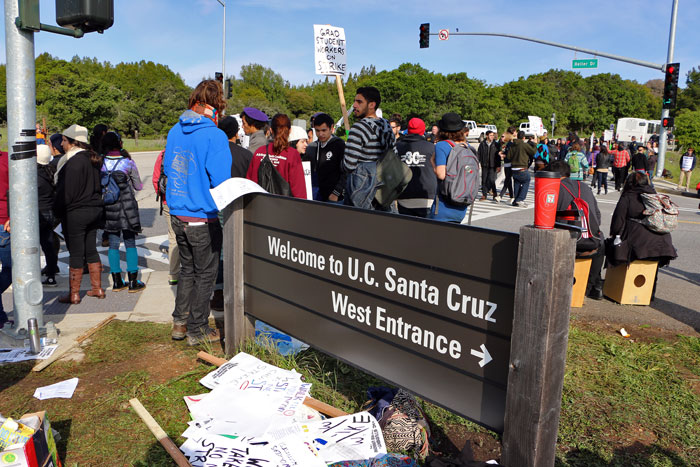 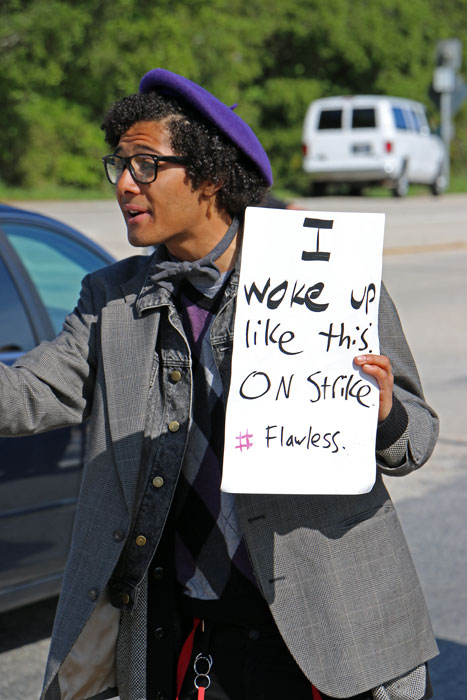 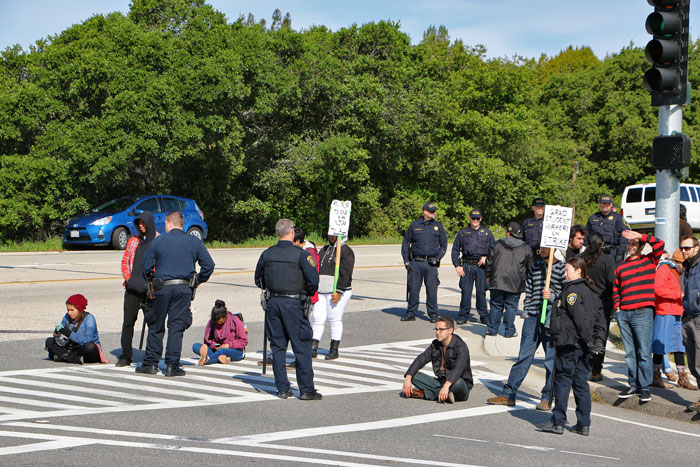 §Demonstrators from the main entrance march to join the picket on the west side of campus
by Alex Darocy Monday Apr 7th, 2014 3:23 PM 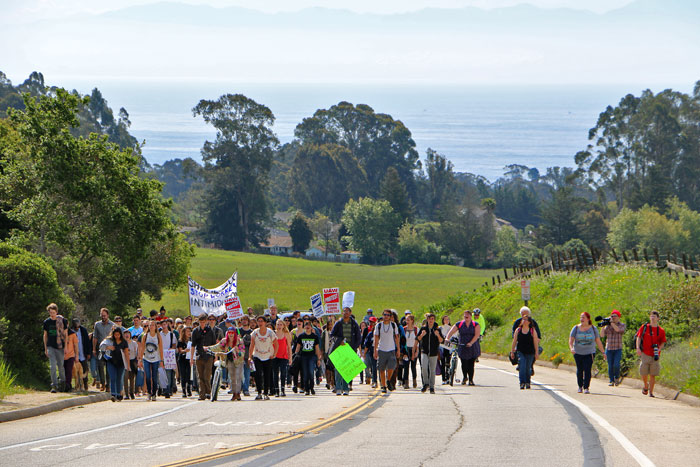 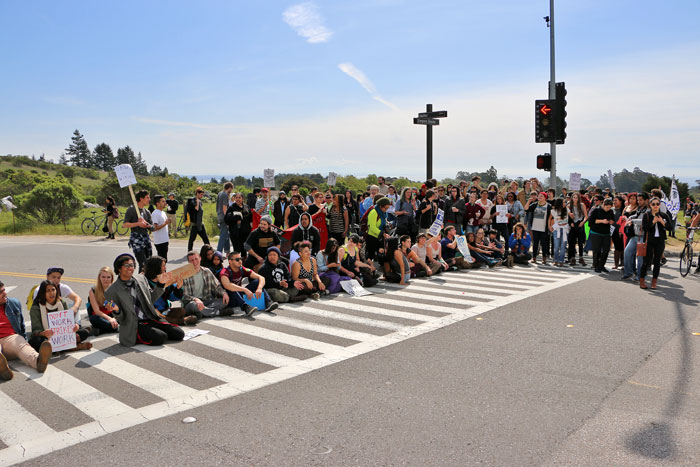 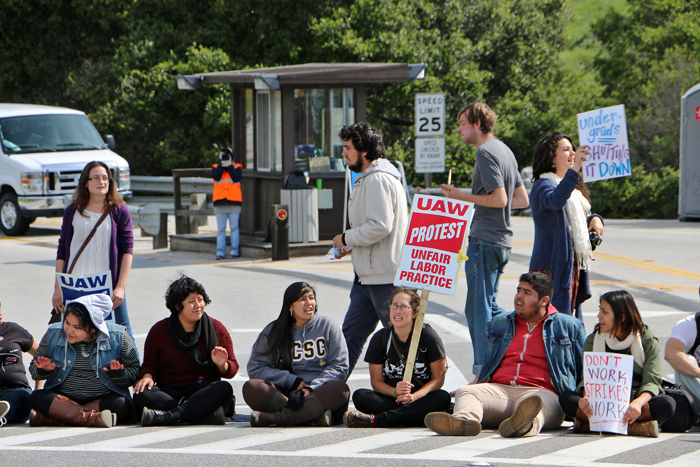 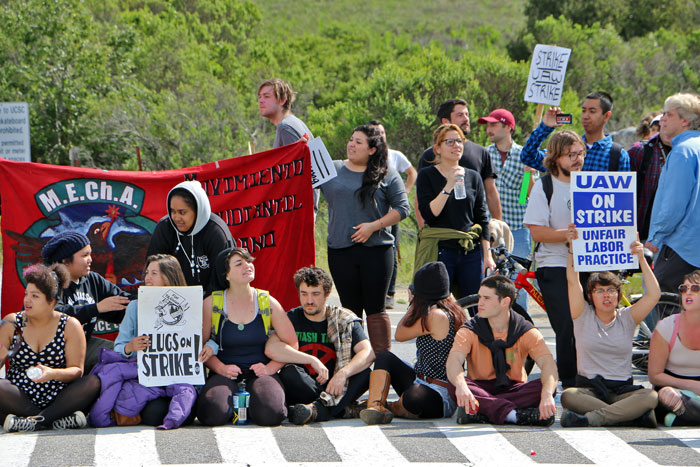 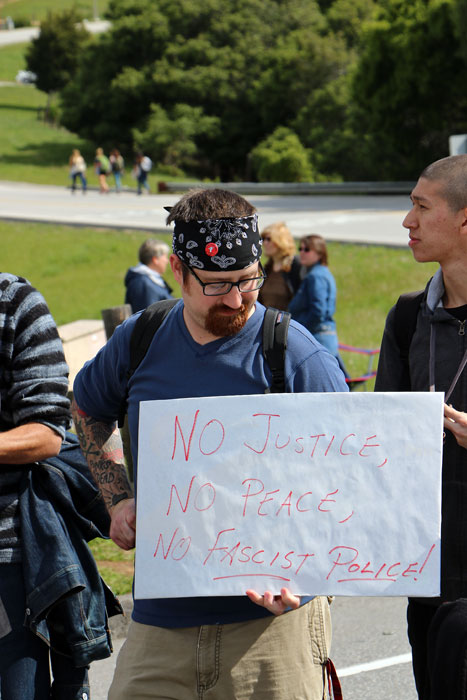 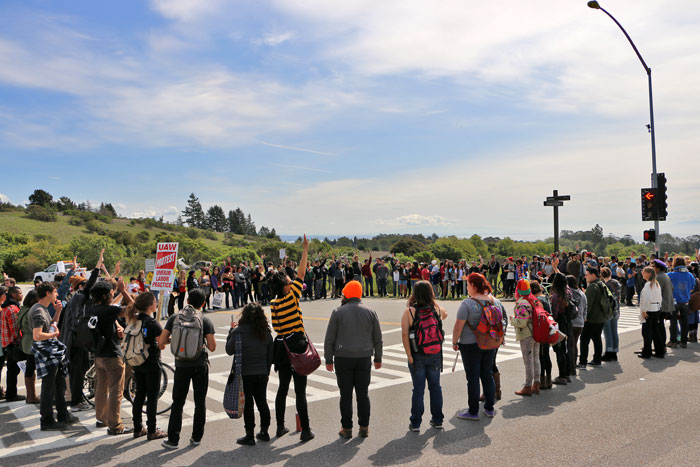 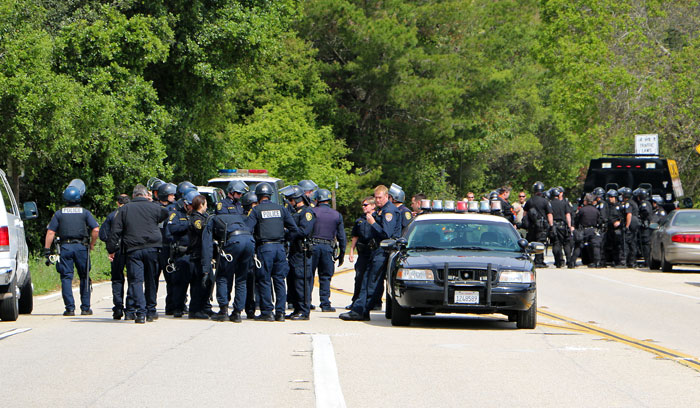 Riot Squads: UC (on the left) and SCPD (on the right)
§Chief Nader Oweis in front of UCSC Officers in Riot Gear
by Alex Darocy Monday Apr 7th, 2014 3:30 PM 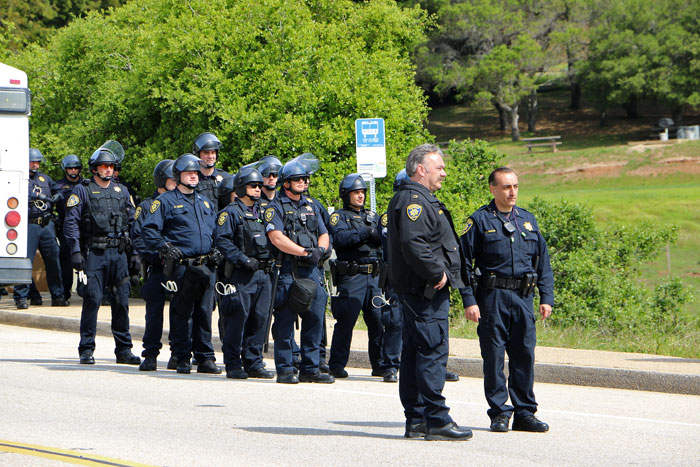 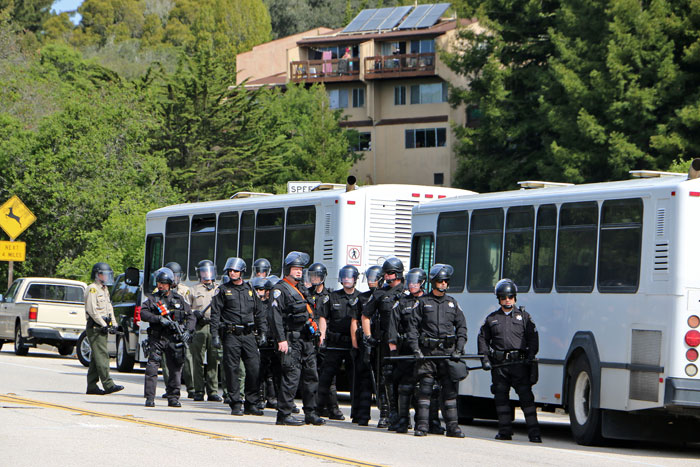 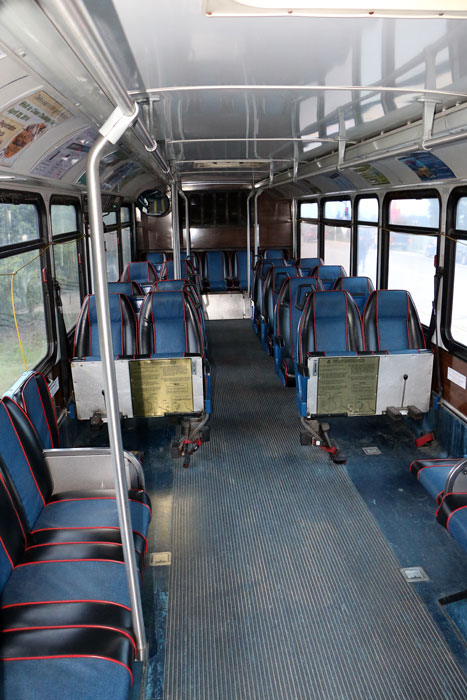 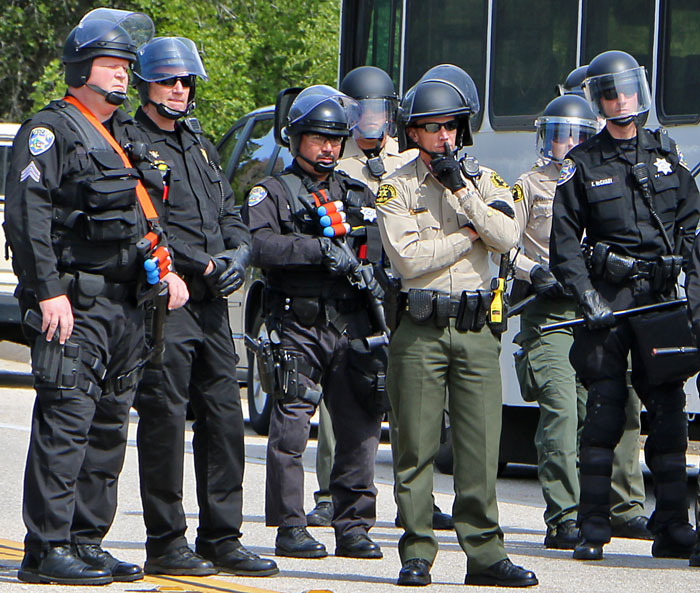 Two Santa Cruz Police Department grenadiers. That is SCPD Lieutenant Dan Flippo in between them, and to the right is a Santa Cruz Sheriff's deputy (with a taser).
§Leaving the West Entrance, Marching through campus
by Alex Darocy Monday Apr 7th, 2014 3:39 PM 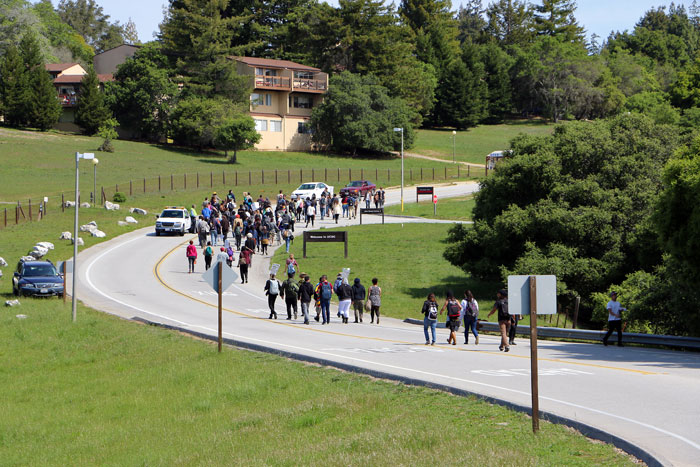 Marching through campus.
Add Your Comments
LATEST COMMENTS ABOUT THIS ARTICLE
Listed below are the latest comments about this post.
These comments are submitted anonymously by website visitors.