Listen to the true bosses of the Euromaiden riots discuss the future of Ukraine:
https://www.youtube.com/watch?v=MSxaa-67yGM#t=89

The authenticity of this conversation between U.S. officials has already been confirmed by Victoria Nuland's apology to the EU. In the conversation she bluntly says, "fuck the EU". Oops. In the leaked phone call, Assistant U.S. Secretary of State Victoria Nuland discusses the future of Ukraine with U.S. Ambassador to Ukraine, Geoffrey Pyatt. The "big three" leaders of the Euromaiden riots they talk about in the conversation are pictured here. 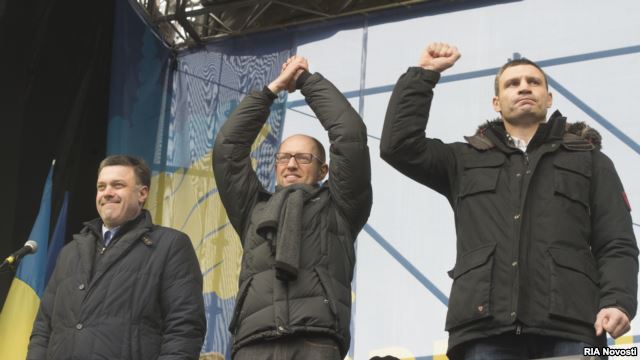 [Photo: The main coalition leaders of the U.S. and E.U. backed riots in Ukraine. From left to right: Oleh Tyahnybok of the neo-Nazi Svoboda party, Arseniy Yatsenyuk of the Fatherland Party, and Vitali Klitschko of UDAR (Punch). This picture was taken at a rally in Independence Square in December 2013. All three parties are right wing capitalist parties. The Fatherland Party and UDAR have no problem working in coalition with the fascist Svoboda movement.]

In the leaked conversation the U.S. officials are clearly supporting Arseniy Yatsenyuk and his rightwing Fatherland Party against the elected presidency of Viktor Yanukovych. The U.S. backed Fatherland Party is affiliated with conservative and Christian Democratic parties of the west. These parties are of course social conservative religious parties that are anti-socialist and strongly support capitalist austerity and exploitation.

President Viktor Yanukovych was the target of a similar operation when he was overthrown in a US backed coup in 2004. That coup was labeled by its imperialist sponsors as the “orange revolution”. Despite Yanukovych winning a sizable majority in the 2004 elections, the imperialists declared the loser of the election, Victor Yushchenko, the winner and pumped large amounts of money into Yushchenko’s supposed “orange revolution”.

This 2004 coup d’etate was heavily financed by U.S. imperialism. To carry out the coup, hundreds of millions of dollars were poured into the country through groups like the National Endowment for Democracy (NED), Open Society Institute (OSI), International Republican Institute (IRI), and the Freedom House. Major backers included MoveOn.org sponsor and American multi-billionaire, George Soros.

For more on why this imperialist backed uprising of rightist forces should be opposed, read my articles:

Ukraine Holocaust Memorial Canceled Out Of Fear U.S. Backed Anti-Semites
https://www.indybay.org/newsitems/2014/01/29/18749979.php
Add Your Comments
LATEST COMMENTS ABOUT THIS ARTICLE
Listed below are the latest comments about this post.
These comments are submitted anonymously by website visitors.