by Steven Argue
The following is meant to be an update of my more in depth article written three days ago:

As an update, most of the facts and arguments made in that article are not repeated in this one. Since the western corporate media is completely misrepresenting what is going on in Ukraine, I strongly encourage people to read that article to better explain the positions I take in this one. 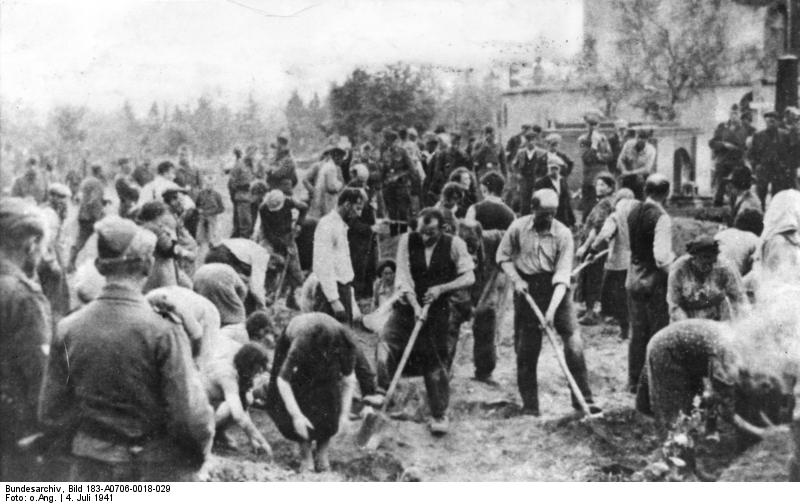 January 27th the annual commemoration of International Holocaust Remembrance Day was canceled in Kiev out of fear of anti-Semitic attacks from the US backed Euromaiden protesters. The annual memorial was to be held at Brodsky Synagogue and was expected to draw 400 people. Three million Ukrainians were murdered by the Nazis during their occupation of Ukraine, including 900,000 Jews. International Holocaust Remembrance Day commemorates the January 27th, 1945 liberation of the largest Nazi death camp, Auschwitz-Birkenau, by Soviet troops. It is a day of remembrance for all victims of the Nazi death machine.

One of the three main parties of the united opposition leading the rioters in the streets of Ukraine is Svoboda, a neo-Nazi party that openly celebrates the Nazi occupation of Ukraine. They even have an annual commemoration celebrating Nazi rule. Ukrainian communists regularly protest against these neo-Nazi commemorations.

Of the cancellation, Rabbi Boruch Gorin of the Federation of Jewish Communities of Russia said, “Unfortunately, among the opposition leaders and opposition forces, well-defined, anti-Semitic speeches have already been recorded.” Gorin called for more protection of Jews by the Ukrainian government against the protesters.

In other news, Prime Minister Mykola Azarov resigned January 28th in response to the protests. President Viktor Yanukovych, a target of the rightist led protests, however, remains in power.

Additional concessions were made to protesters as well. A series of laws directed against the Euromaiden protesters were revoked. These included laws that restricted the ability of foreign sponsored NGOs to function in Ukraine. In 2004 the United States carried out a coup d’etate against the elected government of Ukraine, in part by pumping in hundreds of millions of dollars into opposition groups including US sponsored NGOs. These laws were designed to prevent that kind of intervention. Now, thanks to the Euromaiden movement, anti-democratic imperialist intervention is now allowed in Ukraine.

Also repealed was a law that makes it illegal for the Euromaiden protesters to tie up traffic with caravans in protests they call AutoMaiden.

An additional repealed anti-Euromaiden law was one that made it illegal to destroy WW II memorials and Lenin statues. A new law was then passed to protect WW II memorials, but the government protections of artwork depicting Vladimir Lenin has now been lifted. On December 8th, 2013 the Euromaiden movement toppled a statue of Lenin and then from the pedestal where Lenin once stood they waved the red and black flag of Nazi occupation. Like the Islamists brought to power with $8 billion dollars in U.S. aid in Afghanistan who destroyed all priceless artwork they disagreed with, the U.S. backed Neo-Nazi leader Oleh Tyahnybok has called for the destruction of all artwork depicting Lenin in Ukraine.

An additional concession to Euromaiden protesters is being debated in Ukraine’s parliament. This is one of releasing all jailed Euromaiden rioters. President Yanukovych wants that release to be conditional on rioters leaving occupied buildings. Parliamentary neo-Nazis are arguing instead for their immediate release and for the resignation of President Yanukovych.

In Barack Obama’s State of the Union Address on January 29th he falsely claimed, "In Ukraine, we stand for the principle that all people have the right to express themselves freely and peacefully, and have a say in their country's future." Yet, the protest movement that President Obama, Senator John McCain, and German Chancellor Angela Merkel are backing in Ukraine is extremely anti-democratic.

As of January 28th, ten regional government buildings are now occupied by the rightist led rebellion. Despite being portrayed as a “democratic” opposition in the western corporate media, on January 27th in three regions of western Ukraine the Euromaiden's so-called "People's Councils" voted to ban parties and their symbols. They banned both the Communist Party as well as the elected president's party, the Regions Party. They also banned all symbols of the Communist Party. Meanwhile in the protests of their movement, the red and black flag of Nazi occupation and white power flags are ubiquitous.

The Neo-Nazis of Svoboda are a major component of the leadership of the Euromaiden protest movement. They appear in all of their press conferences and in negotiations with the government. None of the two other main opposition parties have tried to distance themselves from these well-organized neo-Nazis with whom they consistently organize joint actions.

Nor have the US imperialist backers of the Euromaiden movement tried to distance themselves from these neo-Nazis either. US Senator John McCain even appeared on stage with neo-Nazi leader Oleh Tyahnybok. Shoulder to shoulder with Tyahnybok, and with the red and black flags of the Nazi occupation of Ukraine blowing in the wind, John McCain boldly declared, “We are here to support your just cause!”

So far four protesters have died in armed clashes with the Ukrainian police. This, however, is not one sided. The armed protesters have violently attacked security forces with guns, missiles, Molotov cocktails, and clubs, killing one police officer (by gunshot wound) and injuring 100.

Yet despite the extreme violence used by protesters, the Euromaiden leadership, Obama, and western corporate media all portray the protests as peaceful and portray protest casualties as helpless victims of violence by the Ukrainian government. Obama has even declared that he will impose economic sanctions against Ukraine if the government takes tougher measures against the protesters. Likewise, Ukrainian capitalist oligarchs are also demanding that the government settle with this anti-democratic fascist threat in a peaceful manner. It is likely that the capitalist government of President Viktor Yanukovych has been listening to these sorts of pressures when he has allowed rightwing protests that have only numbered in the thousands to rampage through the streets. The Crimean government has demanded that Yanukovych call a state of emergency, but he cannot be counted on. What is needed is the immediate building of non-sectarian workers defense militias that are ready to defend Jews, leftists, workers, and democratic rights from the rightist Euromaiden protesters.

Today’s US support for the anti-Semitic Euromaiden movement isn’t the first time the US has supported anti-Semites in Ukraine. During the Russian Civil War (1918-1922) the US sent troops into Russia to back the White Army. The White Army was so anti-Semitic they that they murdered 100,000 Jews in Ukraine alone. Leon Trotsky led the Red Army against the anti-Semitic White Army as well as against 16 invading imperialist armies, defeating them all.

While supporting rampaging neo-Nazis in the streets of Ukraine as well as the Israeli oppression of Palestinians, Barack Obama hypocritically declared on January 27th:


“On this International Holocaust Remembrance Day, Michelle and I join the American people and our friends in the State of Israel and around the world as we reaffirm our obligation not just to bear witness, but to act. May God bless the memory of the millions, and may God grant us the strength and courage to make real our solemn vow: Never forget. Never again."

Yet today, the promise of U.S. intervention in Ukraine is “ever again”.

Today, US support for Svoboda gives lie to US claims to be concerned about Jews in its 3 billion dollars in military aid given to Israel yearly. That military aid is used to humiliate, oppress, and murder the Palestinian people, driving them from their land like the US government did and does to Native Americans. U.S. military aid is also used to constantly wage war against Israel’s Arab neighbors.

Leon Trotsky was murdered by Stalin before Israel was created, but Trotsky warned Jews that the creation of a chauvinistic capitalist Israeli state on Arab soil would result in more anti-Semitism in the world, not less. Trotsky saw the future planned “Israel” as a giant trap for the Jewish people being laid in part by its imperialist backers. Joseph Stalin, on the other hand, completely reversed the USSR’s position in opposition to the creation of Israel and instead criminally aided it in its birth.


Trotsky instead rightly advocated an anti-capitalist and anti-imperialist program to liberate Jews. The October 1917 Russian Revolution, led by Vladimir Lenin and Leon Trotsky, ended the regular anti-Jewish pogroms carried out by the czarist government and militarily crushed anti-Semitic counterrevolutionary forces. Lenin did this by organizing the Bolshevik Party as a tribune of the people standing up for the rights of all of the most oppressed in society including Jews, women, homosexuals, and oppressed nationalities. Stalin’s seizure of power, on the other hand, overturned some of the important gains of the Russian Revolution, and the Yeltsin led capitalist counter-revolution in 1991 has eliminated almost all of the rest.

Today, as at least some anarchists in Ukraine are participating in these Euromaiden protests that are largely led by neo-Nazis. An anarchist in Ukraine has argued against my position of opposition to the Euromaiden protests. He has no problem participating in protests led by a coalition of three right wing capitalist parties, one of which, Svoboda, is fascist and openly pro-Nazi. One of his arguments is that the real Nazis are the police. This reminds this author of one of the times the cops beat me in jail. In response I called them Nazis out of anger. A cop corrected me. He said, "That shows how little you know about history, if we were Nazis, you would be dead right now." The cop was correct. No Sergio, real fascists like those of Svoboda will roll over the heads of anarchists, Jews, communists, workers, and the left in general crushing your skulls like a terrific tank. The only reason to enter the rallies where neo-Nazis are speaking on stage is combat against them, shut down their microphones, and tear down their banners.

The existing communist parties of Ukraine carry much of the baggage of the ideology of the oppressive Stalinist system.


Also in Ukraine, the fake Trotskyists of the CWI joined the barricades of Yeltsin’s capitalist counter-revolution. For why that was a betrayal of the working class, see my article: “Why The Russian Revolution is Still Important” at the end of this article. Despite claiming Trotsky’s legacy, the CWI’s current program everywhere in the world is Social Democratic rather than being a revolutionary Leninist-Trotskyist program.

As opposed to these tendencies, what is needed in Ukraine is the building of an authentic revolutionary Leninist-Trotskyist party that functions as a tribune of the people standing up for the most oppressed in society. Such a party would never be found anywhere near a neo-Nazi led riot or rally except to protest against it, or smash it, unlike what at least some of the anarchists are doing in Ukraine presently. The first order of the day in Ukraine is the building of non-sectarian workers defense militias for the defense of Jews, communists, leftists, workers, and democratic rights against the U.S. backed Euromaiden movement.

US, EU, IMF Hands Off Ukraine! Stop Supporting Neo-Nazis!
For Democratic Communist Revolution In The United States To End US Imperialism!

This was an update of my more in depth article written three days ago:


Also from this author, see: 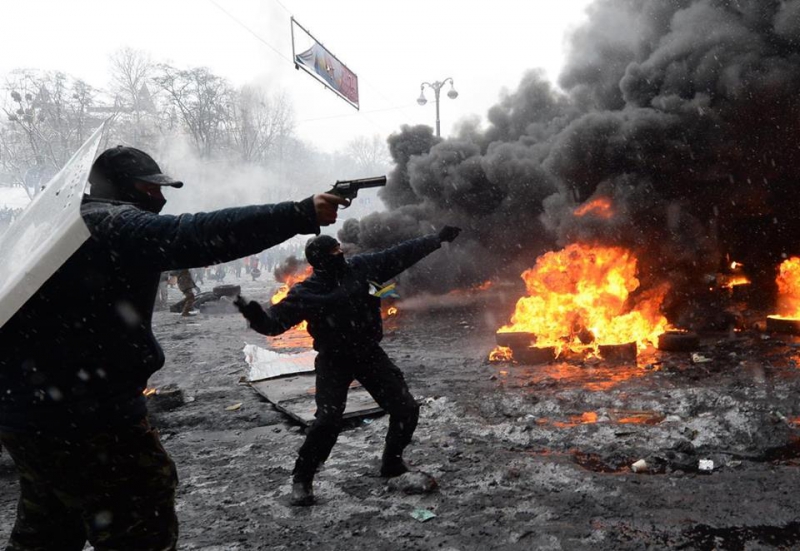 original image (960x662)
One of many photos documenting the extreme violence of protesters the west claims to be non-violent. Ukrainian "peaceful" protester with gun, Jan. 22, Credit Daily News
Add Your Comments
Latest Comments
Listed below are the latest comments about this post.
These comments are submitted anonymously by website visitors.
TITLE
AUTHOR
DATE
Neo-Nazis
Katharine Marshalleck
Response to Katherine
Steven Argue
Deaths in Ukraine 1941
Katharine Marshalleck
Support Independent Media
We are 100% volunteer and depend on your participation to sustain our efforts!