Are Homeless People’s Human Rights being Violated in Fresno?

by Mike Rhodes (editor [at] fresnoalliance.com)
Homeless people in downtown Fresno, like the two in the photo below, are being harassed by the Fresno police. They are being told they can’t sit on public sidewalks, their property is being taken, and some say their constitutional rights are being violated. 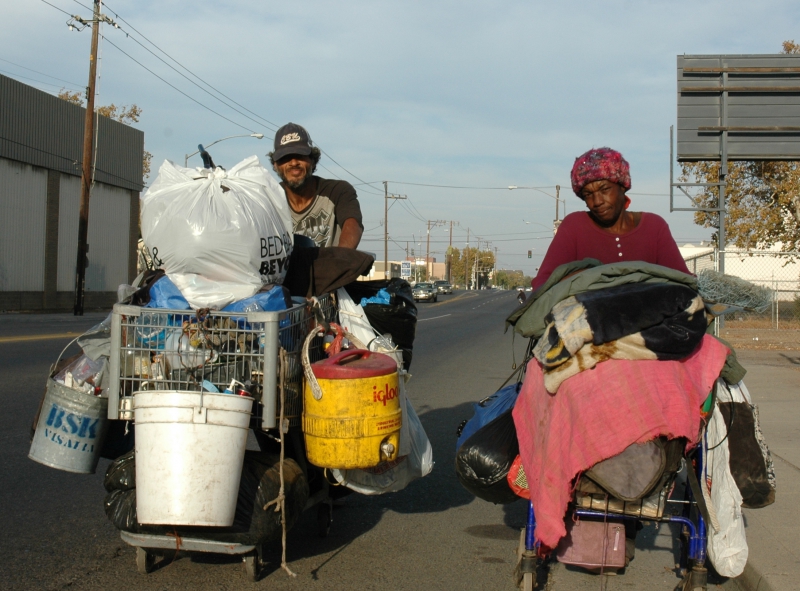 original image (2194x1623)
“They told me I could not sit on the sidewalk and that I could only stay if I sat on the curb with my feet in the gutter, or if I sat entirely in the gutter,” Lori (not her real name)* told me. “A friend of mine got a citation for sitting on the sidewalk, because her sleeping bag and other stuff was beside her.”

Violet (not her real name)*, a homeless woman who lives near the Poverello House, confirmed that citations are being given by the police to people who have their property with them. “If you go into the Pov (the Poverello House - a homeless social service agency in downtown Fresno) to eat and you leave your stuff on the sidewalk the police will take it,” Violet said. If homeless people have property with them they are being cited for having “debris on the road” and if they leave it for a few minutes it is hauled away.

One woman told me she had been taken to the hospital and when she returned everything she owned was gone. She does not know if the police took it, but said that even if they did she could not re-claim it, because she is too sick to walk to the storage facility and carry it back. She begged me for a couple of dollars to buy some adult diapers, to replace the ones that had been taken.

Down the street, Ben (not his real name)* said that on Saturday he had received a sleeping bag and tent from a the Sleeping Bag Project. He put up the tent on Santa Clara street Saturday night. In the morning he got up to go to the bathroom, but when he returned it was gone. He is sure the police took it.

Violet said the same thing happened to her daughter a couple of days ago. “She was gone for a few minutes and when she returned, the tent was gone,” Violet claimed. “The police come every morning at dawn and kick our tent, yell our names, and tell us to get up and move on.” Violet says that the harassment is so bad that she and her friend have to take shifts watching their property. Sometimes she will go eat at the Poverello House and sometimes her friend can go. They can only go together if they hide their property somewhere that can’t be found by the police.

For more information about attacks on the homeless in Fresno, see:

* Homeless peoples real names are not being used in this story out of concern of retaliation.

END_OF_DOCUMENT_TOKEN_TO_BE_REPLACED
Add Your Comments
Comments (Hide Comments)
§Is Mike Rhodes up for an Indy award yet?
by ECH
Well, I'll support it if he is.
Add a Comment
§thanks for the update and shame on the City of Fresno
by Marie
Thanks for the report. I hope you can keep reporting what is happening to the people who are homeless. I'll keep sending the articles to friends, family and my politicans. If anyone tells me they like conservative government I just show them articles about the homeless in Fresno.. cause that is what happens when you have neo cons running the city.
Add a Comment
Support Independent Media
We are 100% volunteer and depend on your participation to sustain our efforts!