Where Hope Goes to Die

by Mike Rhodes (echerith [at] comcast.net)
These photos show where the City of Fresno is temporarily storing property taken from homeless people during the sweeps over the last two months. 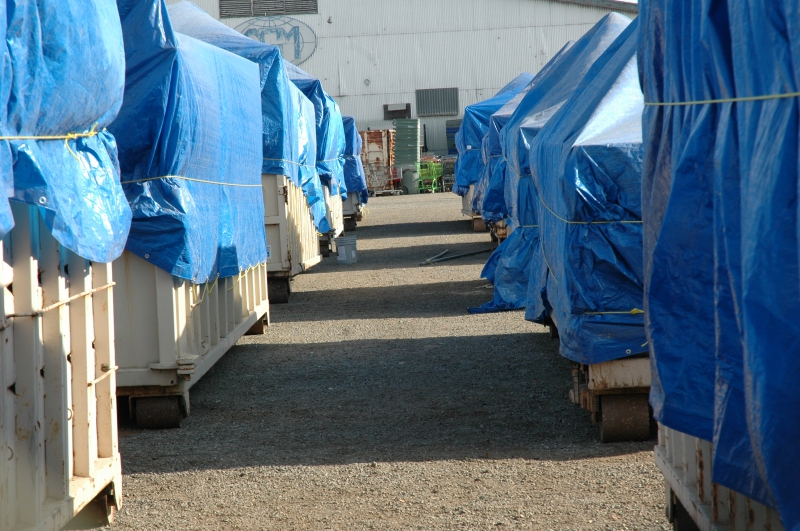 original image (3008x2000)
The large blue tarps flap in the wind and catch your eye as you drive down south down H street, on your way to the center of downtown Fresno. Few people know that this small city of blue topped storage containers is where the City of Fresno, complying with a Federal court order, has brought the confiscated property of homeless people, as they fled the destruction of their humble shelters. Today, the police are confiscating shopping carts filled with homeless people’s property and adding those to the collection - even if the owner of the property just left their property in front of the Poverello House while they got a bite to eat.

This confiscation of homeless peoples property started about 2 months ago with the demolitions of downtown Fresno homeless encampments. It continues today as the police and city workers round up homeless people’s property and lock it away behind a barbed wire fence, guarded 24 hours a day/7 days a week, with very little chance that it will be given back to its owners.

Even when homeless people are with their property, on the streets of Fresno, they are harassed by the police. In an incident that happened about a week ago, a group of homeless people were given “debris in road” citations. The “debris” was their blankets, food, and other items they need to survive.

There is little chance that homeless people who lost all of their belongings in these raids by the police and city workers will be able to re-claim their property, because there is no place in the city that is currently safe for them to keep it. Nobody can carry everything they need to survive with them all day/every day. Therefore, the “technical” compliance with the Federal court order is simply a cover for the city’s ongoing policy of taking and destroying homeless peoples property, endangering their health, and decreasing their overall quality of life.

For information about what homeless advocates are doing to respond to this crisis, see: http://www.helpfresnoshomeless.org/ 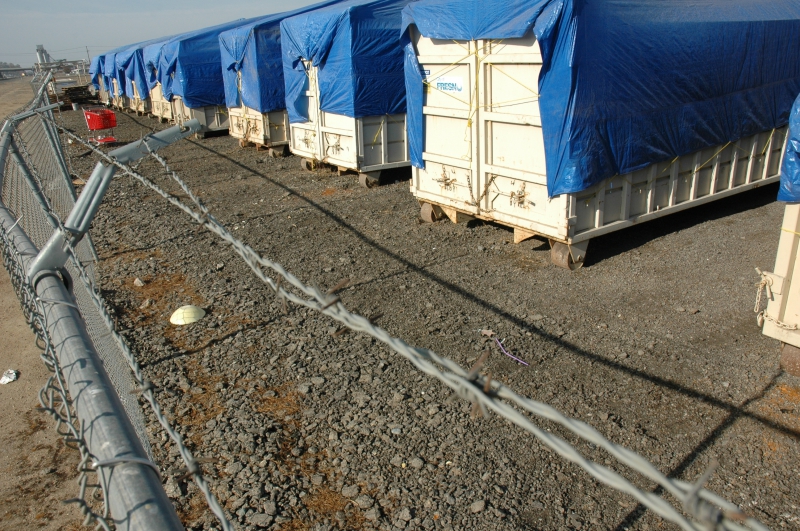 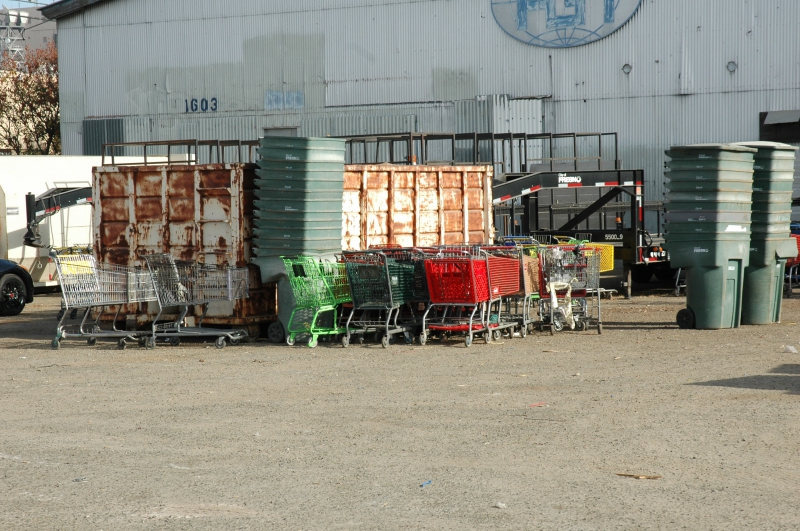 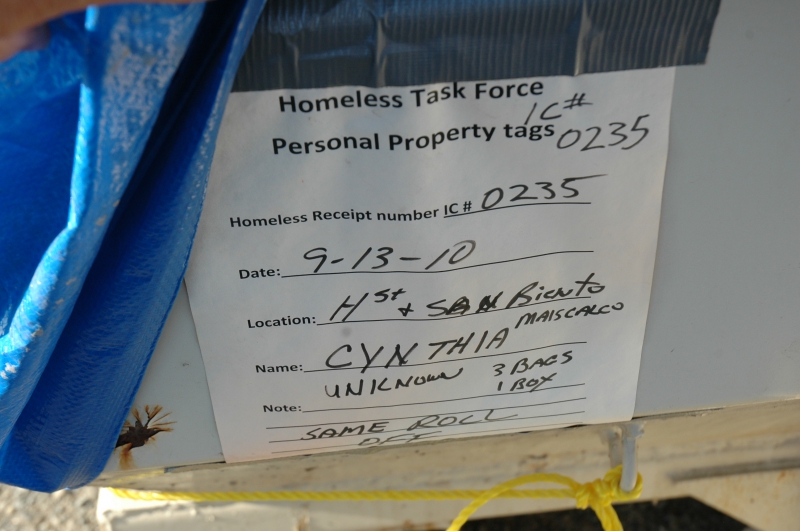 original image (3008x2000)
END_OF_DOCUMENT_TOKEN_TO_BE_REPLACED
Add Your Comments
Comments (Hide Comments)
§So many questions, so few answers
by Kit Williams
The sergeant of the police task force charged with following the homeless to ensure that they do not resettle anywhere told me that the police were taking the shopping carts because the carts belonged to stores and would be returned to them, their rightful owners. Apparently this isn't true, as the carts remain lined up beside the storage containers. Are store owners clamoring for the return of their property? I've read nothing that indicates they are.

The receipt given to a homeless person whose property is confiscated says clearly (on the bottom of the form) that a photo of the property is placed on the reverse side of the form. I have yet to see a single photo of any property.

The idea that the City is complying with the court order is clearly a farce. At the end of ninety days, the property, if unclaimed, can be discarded by the City. If the City isn't doing so, it's undoubtedly because they don't have the resources (the personpower) to do so, not because they are holding it out of the goodness of their hearts.

The idea that a homeless person is capable of reclaiming their property before the end of the ninety day period is likewise a farce, as this article states. Because they are homeless (and lack vehicles), they have no way to transport their belongings and no place to put them were they able to reclaim and transport them.

It is time for all of us to stand up to the City, to insist on both emergency and transitional housing, for safe and legal campgrounds, for some form of housing for those without shelter of any kind. Contact your City Council member now!

The temperatures are dropping into the 40s, into the range at which people can suffer from hypothermia. Can the City be held liable or found culpable in the deaths of any homeless people who have had the most basic of shelters torn from them? A possible question worth exploring ....

Add a Comment
§where hope goes to die
by paulal
It looks like it would be impossible for a person to find their belonging in those big containers.
Add a Comment
§Fresno's Homeless
by Beau Campbell (Excellepd [at] hotmail.com)
Where I do not agree with some of the problems inherent to the homeless, there should be a safety net or alternative to how they are being treated. 53 million dollars to build a bigger better jail is not the solution. More armed policemen trained to shoot and kill people for the slightest provokation is not a solution. Remember the concentration camps and mass persecution of human life turned out to be the wrong solution in Germany and all of Europe. It all began with the seperation name calling and elitist attitudes I see forming all over the cities throughout the states. More homeless shelters and mental health facilities, certainly not more jails and police.
Add a Comment
§Concentration Camps?
by Mike Rhodes
Responding to Beau Campbell’s comment above: I have been thinking the same thing lately. What the Nazis did to the Jews, Gypsies, and Gays was to first demonize them. Their propaganda machine identified them as criminals (and deviants), they were blamed for the problems in society, and soon the state was confiscating their property. The Nazis then herded up these despised outcasts and put them in camps, far from view. Phase 1 and 2 of this plan has already played out here in Fresno - many people hate the homeless, view them as criminals, and are fine with the city taking their property. The next phase of this diabolical plan is already gaining traction among the ruling elite. The idea of moving homeless people into one large camp, away from any houses or businesses was floated in a Fresno Bee editorial on October 23. They wrote:

“We recognize the city's stressed finances. But skilled leadership can move mountains at bargain rates. The mayor should assemble a team of city staff, homeless advocates and community leaders to set up a temporary emergency camp.

The camp should have rules, toilets, wash areas and security. It must be fenced and located in an area without adjacent businesses and homes. Most of all, it should be temporary.”

I have always been fascinated by how the people of Germany could have gone down the road that led to the death camps. Are we headed down a similar path? Well, there is a pattern that has been set into motion and we are heading in that direction. Will things play out exactly like they did in Nazi Germany? Probably not, but the pattern so far is pretty strikingly similar. In the end it will depend on what the people of Fresno do in response to this crisis (just like in Germany - the people could have demanded a different outcome). All I can do is report on what is going on and encourage people to stand up for their brothers and sisters whose civil and constitutional rights are being abused.

Add a Comment
§Link to facebook
by ann m
I wish there was a link for facebook on this story and the other indymedia's. but I'm still sharing and sending to the article to my MN US Rep and Senators.
The City of Fresno should be ashamed of their abusive behavior. I'm also sending to CA Attorney General and US Fed DOJ. shame.
If the city of Fresno officials can maintian human rights when dealing with the Homeless, how can they handle any of the Cities issues?
I bet some City officials are pocketing or giving paybacks to others from the Fed money that was sent to them from dealing with homeless issues.
Add a Comment
§link to facebook question
by jenna (editor [at] HOPEmakingchange.org)
I think someone was asking about finding the article on facebook. We post all of Mike's articles about the Fresno situation on Facebook at our Making Change Street Newspaper Facebook account. All you have to do is copy the link to Mike's article and paste it to the news feed or to your wall and it will come up brilliantly.

I send my love and solidarity out to the folks in Fresno who are fighting for the right to sleep, to camp, to maintain life outside the city limitations.
END_OF_DOCUMENT_TOKEN_TO_BE_REPLACED
Add a Comment
Support Independent Media
We are 100% volunteer and depend on your participation to sustain our efforts!