Add an Event
Newswire
Calendar
Features
Home
Donate
From the Open-Publishing Calendar
From the Open-Publishing Newswire
Indybay Feature
Publish to Newswire
Add an Event
Related Categories: East Bay | Education & Student Activism | Environment & Forest Defense | Global Justice & Anti-Capitalism
Occupy the Farm: a Struggle for Land Sovereignty
by Tiffany Tsang (tmt39 [at] cornell.edu)
Monday Jul 8th, 2013 4:31 PM
Occupy the Farm (OTF), an assembly of activists of the East Bay focused on a future of food sovereignty through sustainable agriculture, is once again raising its voice against unsustainable development, reclaiming a piece of the Albany Gill Tract that is slated for commercial development by Sprouts "Farmers Market". The Gill Tract, previously the epicenter of sustainable urban agricultural research and a thriving educational space, has been a battleground in recent years as development plans have met repeated resistance from OTF and others fighting for land sovereignty. 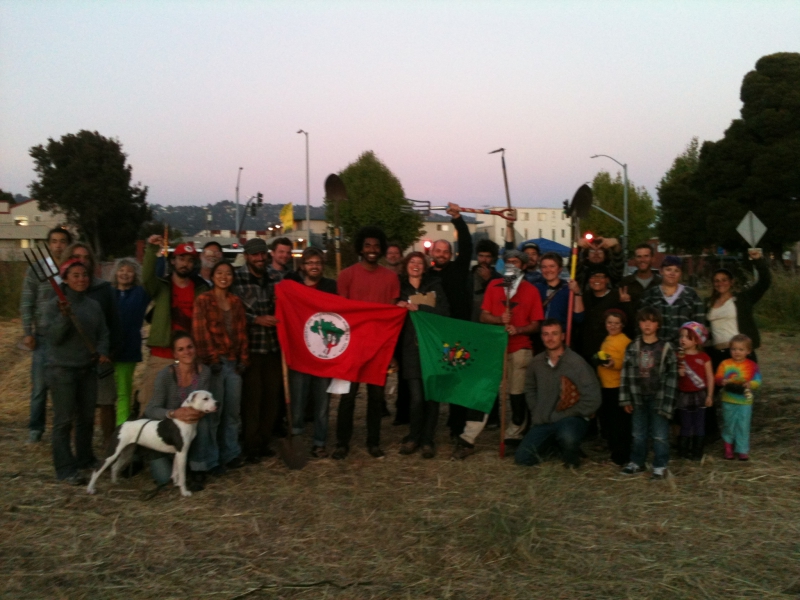 Occupy the Farm (OTF), an assembly of activists of the East Bay focused on a future of food sovereignty through sustainable agriculture, is once again raising its voice against unsustainable development, reclaiming a piece of the Albany Gill Tract that is slated for commercial development. The Gill Tract, previously the epicenter of sustainable urban agricultural research and a thriving educational space, has been a battleground in recent years as development plans have met repeated resistance from OTF and others fighting for land sovereignty.

The piece of land in question, the southern portion of what remains of an original 104-acre tract owned by the University of California system, is slated for development by Sprouts Farmers Market, a supermarket chain with over 150 stores in the US. Last year, due to OTF pressure, “natural” and organic foods retailer Whole Foods backed out of a deal with the UC. Sprouts is now attempting to make a deal with the UC over that same piece of land. This year, in the space of nine days in May, occupiers broke ground, establishing an urban farm, and replanted the field twice in response to each time the UC police ploughed over the work of the peaceful protesters.

As a taxpayer-funded land-grant institute, OTF argues that the UC has a responsibility to provide research and services that benefit its community. Under UC’s current plan to sell the land to the Sprouts supermarket chain, OTF sees little value added to the community--Whole Foods has relocated its plans to a space two blocks south of the Gill Tract for an opening in 20141. But the larger question is: who in the community most needs the land, one of the last pieces of class-1 uncontaminated agricultural land in the urban East Bay. As Effie Rawlings put it: OTF does not focus on the legal claim the community has to the land but supports the idea that “land use decisions should not be based on economic reasons, but social and environmental reasons.”

OTF activists argue that urban agriculture can help alleviate the problems of hunger and poverty in the East Bay: 169,000 adults in Alameda County earning at or below 200% the Federal Poverty Line experienced food insecurity in 20122. Urban agriculture—which produces 15-30% of the global food supply3—holds real potential to feed the community: the 1,201 acres of underutilized or vacant lots in Oakland could produce enough fresh produce to satisfy at least 40% of the city of Oakland’s fresh vegetable needs and an additional 337 acres of underutilized land is private land that could be used for urban agriculture4.

Instead of recognizing the connection between hunger and access to underutilized land, currently none of the agriculture endorsed by UC planners on the Gill Tract benefits the local community5. Just north of where Sprouts is to be developed, the UC is conducting basic maize research on gene silencing6--knowledge of which is essential for transgenic research--and research on agrofuel production7. With these projects, the UC claims to be alleviating world hunger8. But in fact, these projects only benefit agribusiness. In fact, the way in which improved seed technology and basic research on agricultural commodities is conducted is another form of privatization--the privatization of knowledge--and has throughout its existence systematically disadvantaged small farmers since the Green Revolution9.

The new development plan with Sprouts is only another symptom of a larger problem concerning the management of the Gill Tract. This problem is connected to the small farmers and peasants around the world who have for decades resisted the power of industrial agriculture and land grabbing for the production of industrial food, feed, and fuel10. But OTF aims to shed light on the fact that agricultural land for growing food not just in the global south, but in Europe11 and the West--and, apparently, in the East Bay as well—is increasingly difficult to access. OTF is part of the global fight for land sovereignty, defined as “the right of working peoples to have effective access to, use of, and control over land and the benefits of its use and occupation”12.

Due to last year’s occupation, the UC transferred a portion of the Gill Tract from UC Capital Projects to the University’s Department of Natural Resources. Due to renewed pressure from OTF this year, the UC has recently initiated negotiations for a parcel of land adjacent to the site of OTF resistance to be set aside for public use. Miguel Altieri, Professor of Agroecology at UC, is offering his lab’s field on the north side of the Tract to the community for a participatory urban agriculture research project to demonstrate the benefits of community involvement at the Gill Tract.

Currently, Occupy the Farm is launching a pressure campaign against Sprouts, and building its base by supporting other community actions and holding workshops centering on issues of food sovereignty. To support OTF’s pressure campaign against Sprouts’ development of the Gill Tract, you can join the pledge to boycott the supermarket chain if plans for development continue. To join the Gill Tract’s participatory urban agriculture project, contact tmt39@cornell.edu before July 20 for details.