Add an Event
Newswire
Calendar
Features
Home
Donate
From the Open-Publishing Calendar
From the Open-Publishing Newswire
Indybay Feature
Publish to Newswire
Add an Event
Related Categories: Santa Cruz Indymedia | Health, Housing & Public Services | Police State & Prisons
First Alarm Security Guards Profile and Stalk San Lorenzo Park Users
by Alex Darocy (alex [at] alexdarocy.com)
Monday Jun 24th, 2013 2:59 PM
As a group of approximately one dozen Santa Cruz community members sat in the shade of a tree overlooking the San Lorenzo Park benchlands on the warm afternoon of June 19, a security guard from First Alarm stood nearby them watching every move they made. One of the community members subjected to the close and extended scrutiny said he was cited for being in possession of an open container that was not his, and he thought the initial contact with authorities was due to their perception he was still on probation, and that he would be violating his terms of release if caught doing something wrong. [Top photo: A security guard watches San Lorenzo Park users from approximately 30 feet away, using the pedestrian bridge as cover. Scroll down for more photos.] 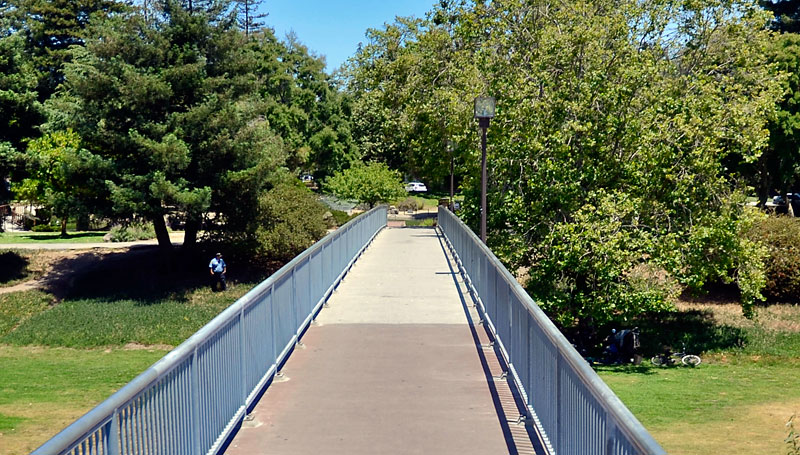 The individual cited said he was not on probation and he was unknowingly sitting near the beer bottle when a security guard with First Alarm spotted it during one of several on-foot sweeps made directly through the group of park users that day. Those in the group said the bottle was nestled inside of a drink holder that masked its markings from plain view, and they thought it was left behind by someone not present at the time of the security guard's arrival. They said the First Alarm guard then called the Santa Cruz Police Department who arrived quickly and cited the individual, telling him that his proximity to the bottle indicated his 'possession' of it. After the police officer left, the First Alarm guard continued to watch the group carefully for an extended period of time, even though the area surrounding them appeared clean and devoid of anything resembling an alcohol container.

They say that guards have developed a routine of walking directly through groups of park users identified as problematic. This is done multiple times during the day, and during the process their possessions are visually inspected at close range. First Alarm guards also stand and watch park users for long periods of time from nearby locations.

In addition to staring and sometimes glaring at them, individuals say the guard who was watching them that day has also previously attempted to intimidate their group by waving his metal baton/billy club at them, and by putting on his gloves in an exaggerated manner for no apparent reason.

When asked if another group of park users who were sitting in the benchlands area was also being closely watched by the security guards, they said yes, but the walk-throughs weren't as frequent.

At the same time the individual was being cited for the open container, across the banks of the San Lorenzo River along the levee trail, another First Alarm security guard (see photo) sat in a patrol vehicle watching a small group of people who were sitting under the shade of a tree on the retaining wall that lines River Street. As the guard sat watching this group, his patrol vehicle blocked a segment of the San Lorenzo Riverway trail, and bicyclists had to slow down and take care to maneuver around it safely.

Shortly before that, Santa Cruz Police Department Officer Hoppe (see photo) patrolling the San Lorenzo Riverway on a bicycle, told an African American man that the the area where he was sitting was, "not a sitting path." Officer Hoppe then told the individual to move off the paved portion of the trailway if he wanted to sit down. The man had been protruding approximately one or two feet onto the path when the officer encountered him, and as soon as Hoppe left, the man resumed sitting on the path.

There is no signage along the San Lorenzo Riverway trail that indicates sitting is not allowed on or near the path. On the contrary, a welcome sign that is posted at one of the entrances to the trail system states, "Prevent Erosion by Staying on the Path," though the sign is hard to read due to its physical condition.

Trail users may also remember the "Area Temporarily Closed" signs that lined the San Lorenzo Riverway for the better part of the last year that made it a citable offense to veer off of the trail past a certain point. Those signs were installed in July of 2012 every 50 feet or so along several miles of the river levee, making the shoreline and banks of the entire downtown length of the San Lorenzo River inaccessible for any reason until recently.

Most of the signs have been removed, and the only remaining "Area Temporarily Closed" signs are presently located along the levee trail near the rear of businesses located on Front Street.

Signs that say "Alcohol Prohibited" and "No Camping" are posted at several of the trail entrances and on some utility structures.

The practice of security guards positioning themselves close to groups of individuals to monitor park users' behavior closely and for extended periods of time has been in effect since as early as 2011.

More recently, San Lorenzo Park users have reported an increase in harassment by security guards, park rangers, and SCPD officers since the summer of 2012 when a period of intensive homeless sweeps were initiated by the SCPD and the City of Santa Cruz's Department of Parks and Recreation. The installation of "Area Temporarily Closed" signs every 50 feet along the river levee coincided with these sweeps.

Now that the signs are gone, park users have made a very visible return to their normal enjoyment of the banks of the river.

I received the following email from an associate of mine who lives near the San Lorenzo River and walks the levee regularly, shortly after publishing the article, "City Installs 'Do Not Enter' Signs Around Entire Downtown Segment of San Lorenzo River" to Indybay in 2012 (see: https://www.indybay.org/newsitems/2012/08/14/18719511.php)

"On August 9th [of 2012], shortly after the vegetation clearing began and apparently shortly before the signs went up, I was threatened quite aggressively by a First Alarm agent while cautiously approaching a great blue heron below the levee. I appreciate his personal respect for wildlife, but if he thought that I was going to frighten the bird by crouching quietly, I wonder what effect he imagined that shouting commands at us would have... As I gaped up at him for a few moments, dumbstruck and disappointed (never having before been threatened for something so benign as birdwatching), he rapidly increased his hostility, shouting that he would momentarily call the SCPD, citing a municipal trespassing code. This was all in the course of about 10 seconds, and felt very unfriendly and unpleasant.

"When I approached to question him, he was fairly quick to revert to friendly conversation. Maybe because of my lack of hostility, maybe because my appearance is edge case drifter/yuppie. I asked about the willow clearing, and he assured me that the removal of such habitat has had a positive impact on the birds, by flushing out "the transients and their bongos." He claimed that the official purpose of this clearing was for irrigation reasons (??), but proudly revealed that the the true purpose was in fact to remove these undesirables. He then showed me his log-sheet, an intimidating grid of what must have been at least four or five dozen law citations, each with a tally box. He said he'd turn this in to the PD at the end of his shift. There were about a dozen tallies for the trespassing code, several for alcohol, and a few others scattered about the other codes. Several cyclists dismounted to navigate around the First Alarm truck, which he'd parked on the narrow underpass ramp. An older man walking his dog stopped to also express his dismay at the vegetation removal. I said goodbye and departed on the pavement. The heron was long gone." 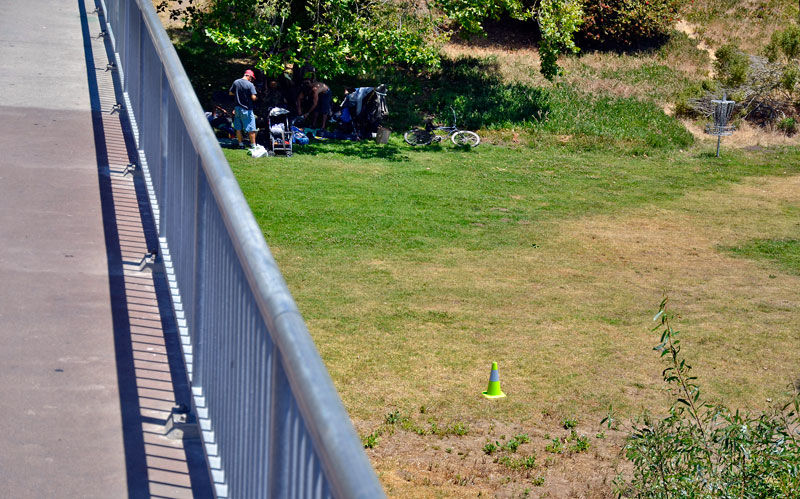 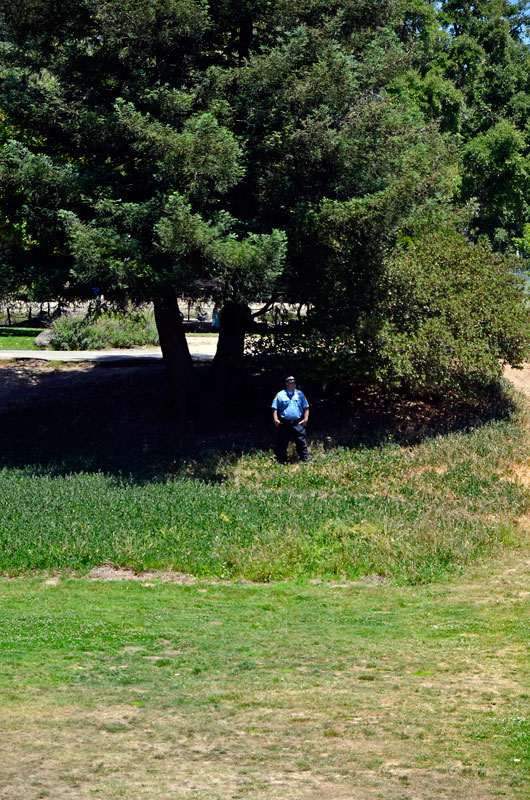 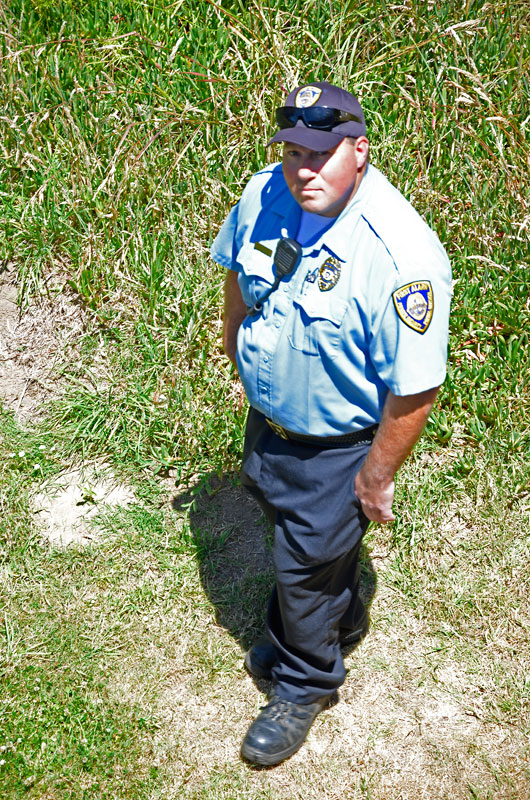 San Lorenzo Park users say this guard glares at them and attempted to intimidate their group by waving his metal baton/billy club at them, and by putting on his gloves in an exaggerated manner for no apparent reason. 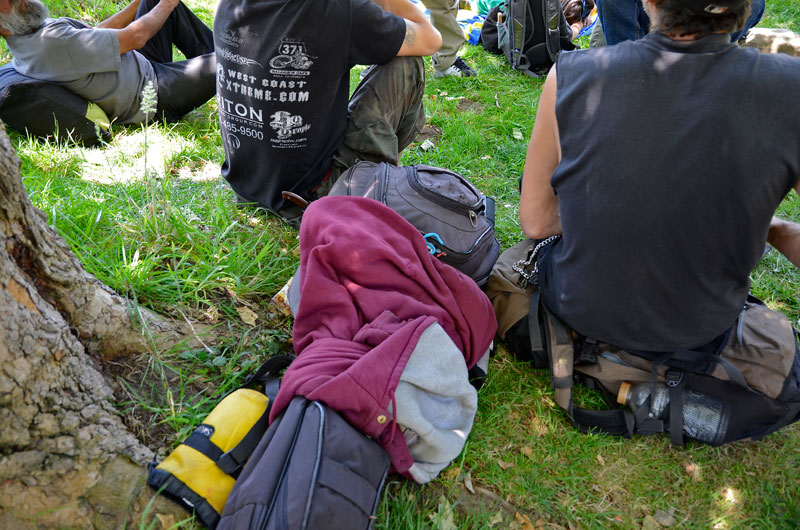 The individual in the black shirt says that he was sitting at this distance from the yellow drink container when he was unfairly cited for possession of an open container. He said that none of the belongings were his.
§First Alarm
by Alex Darocy Monday Jun 24th, 2013 2:59 PM 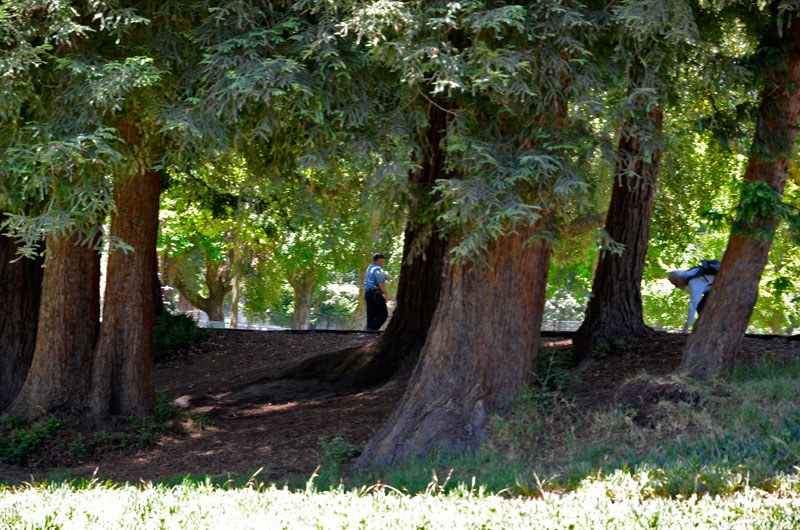 After noticing he was being photographed, the First Alarm guard attempted to watch the group of park users from a more 'discrete' location, but still kept turning away when the camera was pointed in his direction.
§First Alarm
by Alex Darocy Monday Jun 24th, 2013 2:59 PM 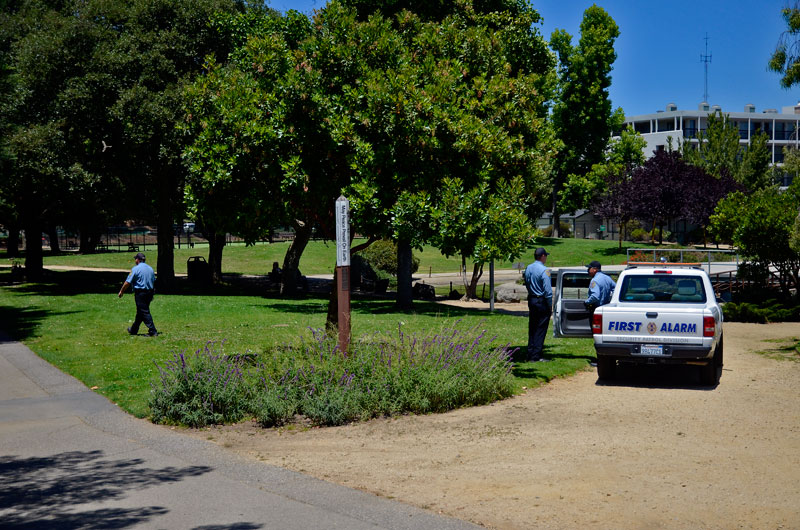 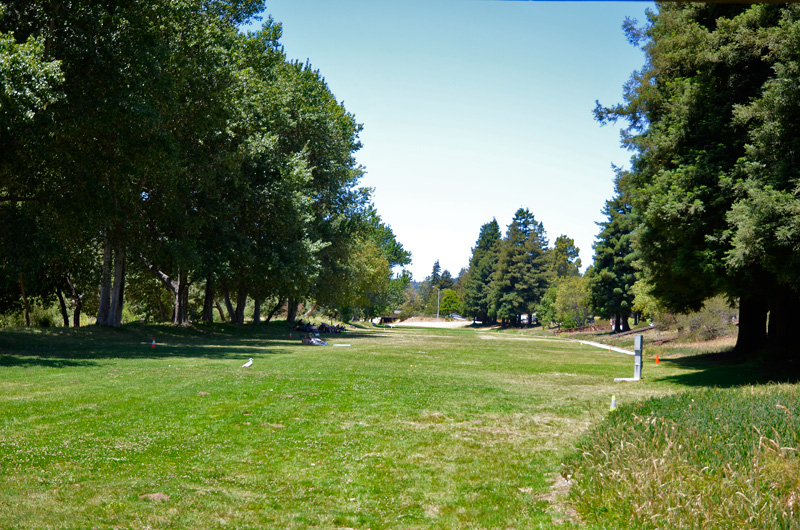 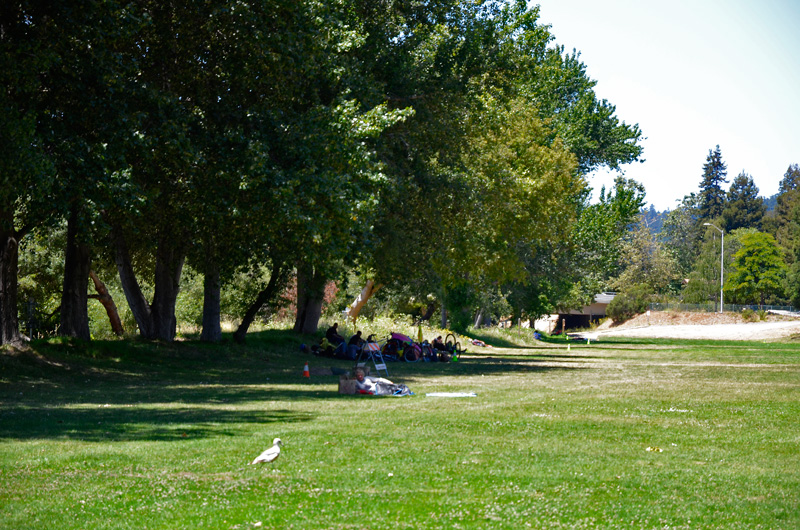 This group was also the subject of close attention from First Alarm.
§First Alarm watches a group on the San Lorenzo Riverway along River Street
by Alex Darocy Monday Jun 24th, 2013 2:59 PM 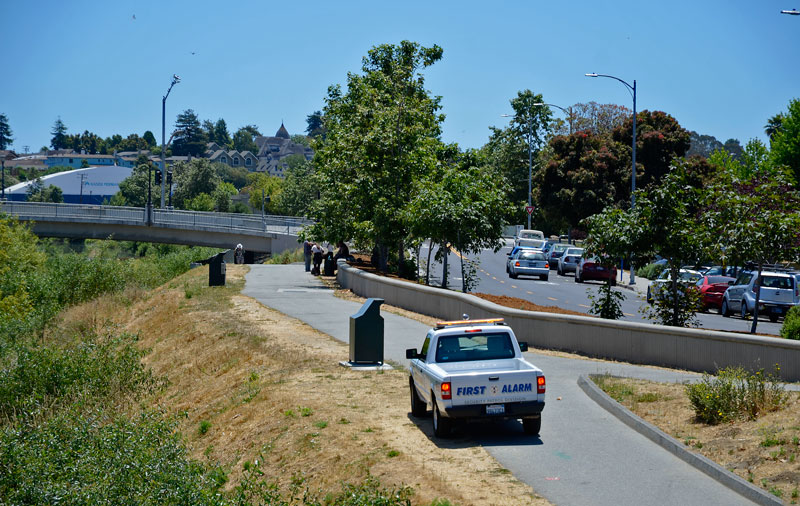 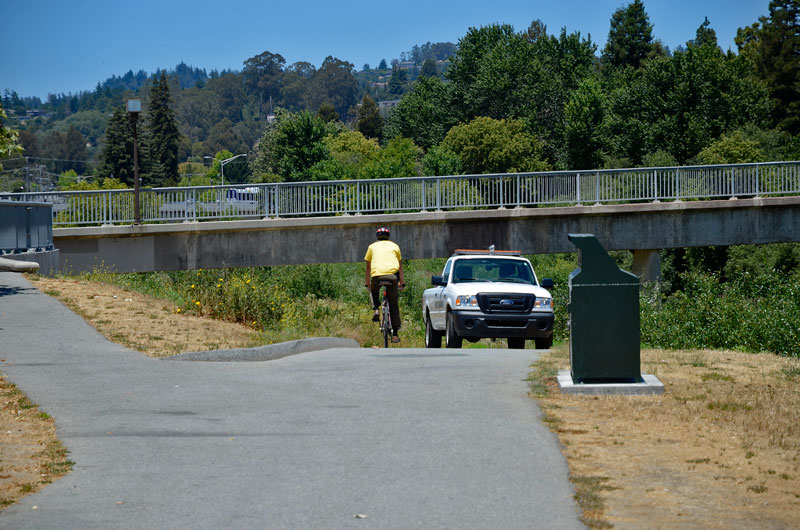 A bicyclist squeezes by as a First Alarm guard watches a group of San Lorenzo Riverway users.
§SCPD Officer Hoppe tells man, "This is not a sitting path"
by Alex Darocy Monday Jun 24th, 2013 2:59 PM 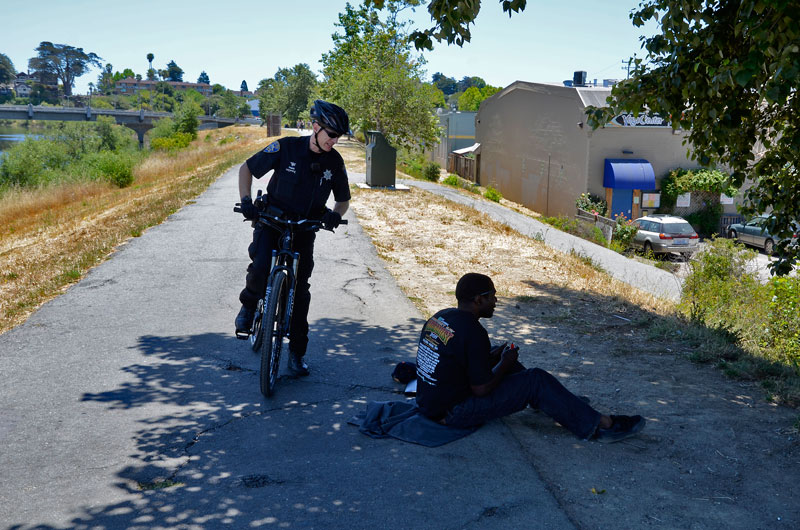 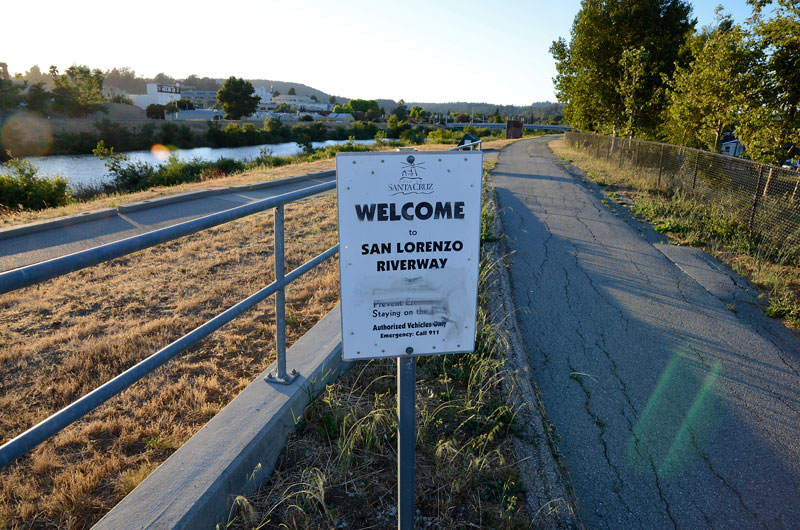 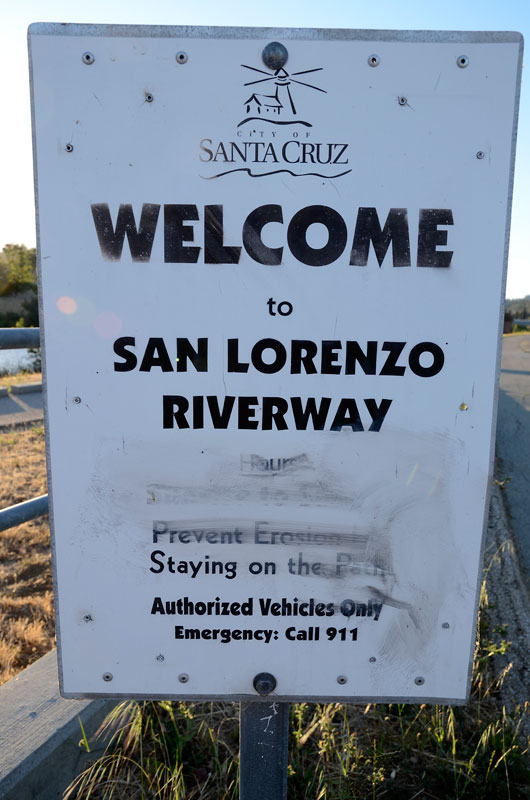 The welcome sign that is posted at one of the entrances to the trail system states, "Prevent Erosion by Staying on the Path."
§
by Alex Darocy Monday Jun 24th, 2013 2:59 PM 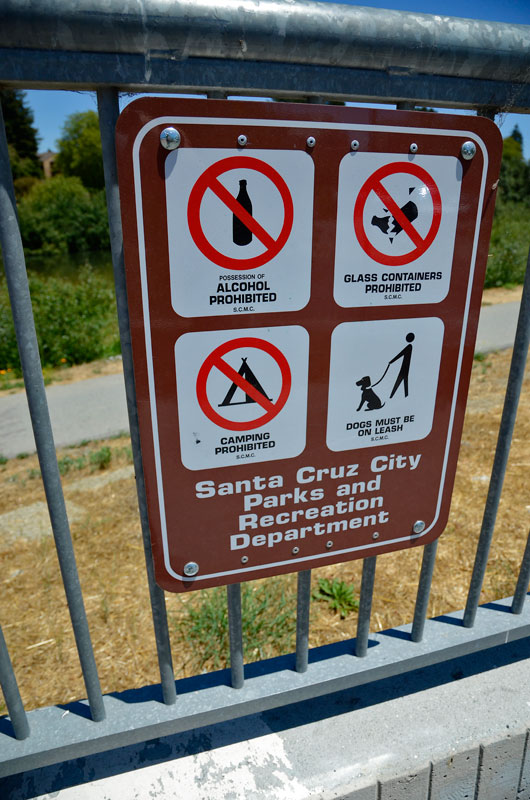 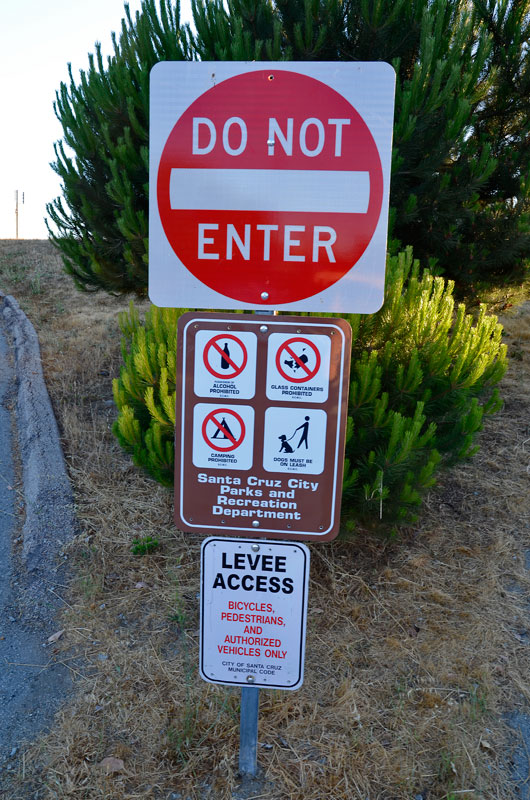 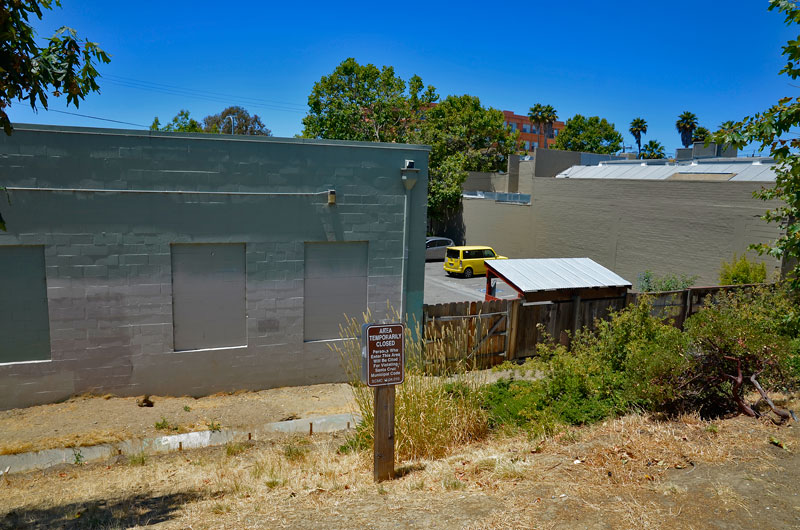 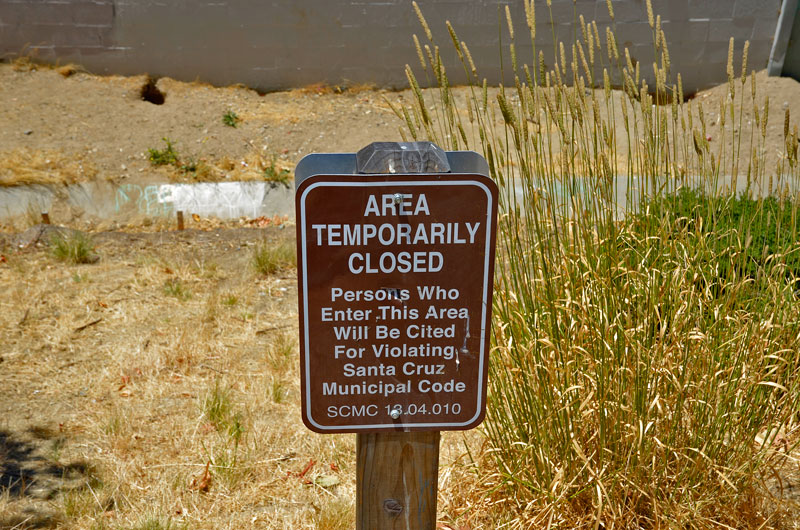 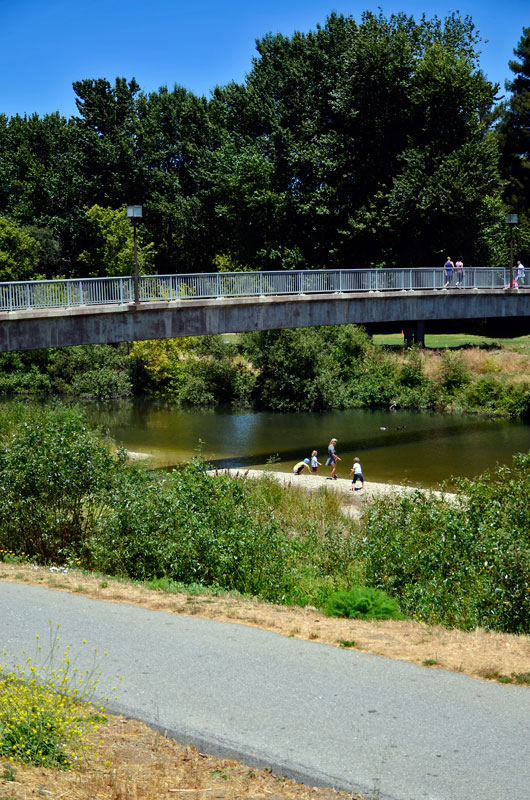 §Correction
by Alex Darocy Monday Jun 24th, 2013 5:54 PM
I originally identified SCPD Officer Hoppe as a First Alarm Security Guard in the article. This has been corrected.
Add Your Comments
LATEST COMMENTS ABOUT THIS ARTICLE
Listed below are the latest comments about this post.
These comments are submitted anonymously by website visitors.