Add an Event
Newswire
Calendar
Features
Home
Donate
From the Open-Publishing Calendar
From the Open-Publishing Newswire
Indybay Feature
Publish to Newswire
Add an Event
Related Categories: Santa Cruz Indymedia | Health, Housing & Public Services | Police State & Prisons
City Installs 'Do Not Enter' Signs Around Entire Downtown Segment of San Lorenzo River
by Alex Darocy (alex [at] alexdarocy.com)
Tuesday Aug 14th, 2012 1:36 AM
According to signs installed by the City of Santa Cruz Parks and Recreation department, the levee area of the entire downtown segment of the San Lorenzo River, stretching from the Laurel Street Bridge to the Highway One Bridge, is 'temporarily closed' and persons who enter the area will be cited under local municipal code 13.04.010. The new signs line approximately three quarters of the San Lorenzo Riverway trail and are spaced at a distance of about 75-100 feet apart. They were installed less than a week ago on both banks of the river, according to First Alarm security guards who patrol the area and were interviewed on August 11 and 12. This was confirmed by an older, disabled homeless woman who was sitting next to one of the signs in San Lorenzo Park. "It's horrible what they are doing to us," she said. Her friend, also an older woman, pointed in the direction of another one of the signs that was located near the river by the Water Street Bridge, "That is my home," she said. 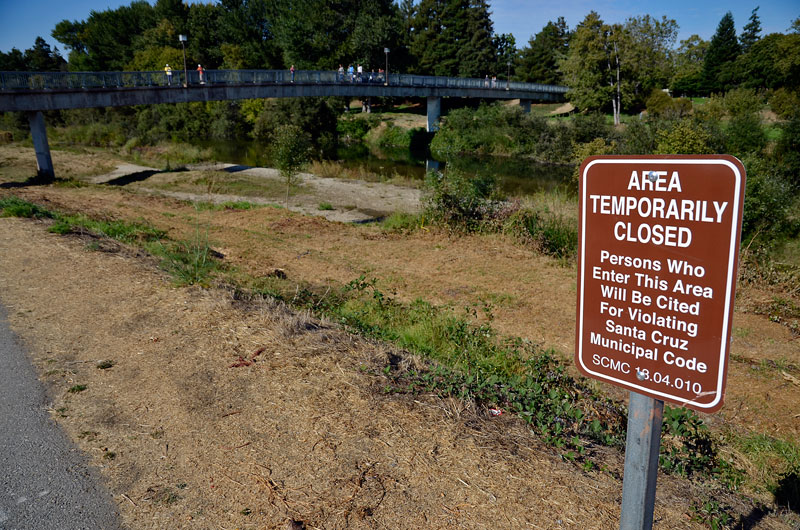 Almost an entire mile of the river levee has been closed to all uses by the public. The signs read, "AREA TEMPORARILY CLOSED. Persons Who Enter This Area Will Be Cited For Violating Santa Cruz Municipal Code 13.04.010, and they have also been installed in the area behind the businesses on two blocks of Front Street that border the river. The installation of the new signs by the Parks department comes after weeks of raids on the homeless by the Santa Cruz Police Department.

On July 9, the SCPD issued a joint press release with the Parks and Recreation department announcing that over the time period of 30-45 days there would be a joint effort by both agencies to clear out the known homeless sleep sites located within city limits. Over the course of several raids, the police announced that a number of campsites were raided and cleared. In addition to clearing out campsites, the police announced that community members who had failed to appear in court three or more times in association with anti-sleep related citations they have received would have arrest warrants issued for them, as opposed to having the infractions handled as a civil matter, which was previously the procedure.

Individuals who have been subject to these raids have been reporting since the middle of July that they were being threatened by police during daylight hours with citations for simply being in the vicinity of known sleep-sites in the river area downtown. The new signs now make that police policy official.

There are several locations in San Lorenzo Park where the 'Area Temporarily Closed' signs are installed near signs that call attention to the new disc-golf course. The close placement of the two types of signs sends a somewhat confused message to people who may want to use the area. The new disc course, which opened for use in early July on the side of the park that fronts the San Lorenzo River, can also be considered a type of "people barrier". The only permitted use in the vaguely outlined course is disc golf, though that regulation is unevenly enforced. This was the case over the weekend when those attending the SF Mime Troupe event on August 11 and 12 were allowed to occupy the game area, and lean on the disc-golf cages.

In addition to the "Area Temporarily Closed" signs, the sandy area in between the San Lorenzo Park Benchlands and the Water Street Bridge is marked with one lone "Area Closed For Vegetation Restoration" sign. Entering that area without a permit is also a violation of municipal code SCMC 13.04.010.

The Santa Cruz Municipal Code that is referenced on the signs, 13.04.010, is vaguely written:

Whenever this code or any ordinance or resolution of this city designates and describes any public property as having been withdrawn from personal access and use by members of the public, or as having been limited as to access and use by members of the public and notice thereof has been posted conspicuously on or adjacent to the property so designated, it is unlawful for any person to thereafter enter upon or use such property without permission or in a manner other than that prescribed. (Prior code § 3636)

This vague and uneven communication of the law is also present on other types of signs along the San Lorenzo Riverway. Located on the west bank of the river, near Highway One, the Gateway Plaza is a shopping center with private, landscaped walkways that lead to the riverway trail. There is a small plaza built by the shopping center that lines the levee, and on it is installed a sign that states: "Notice: No Sitting/ Or Lying, No Trespassing. Violation S.C.M.C. 9-060-010." Sit-lie laws locally are written separately from the trespassing ordinances, which is what 9-060-010 is, and they are not enforceable near the river area. This sign seems to condense two ordinances into one in a confusing, but not necessarily legally accurate attempt to deter a certain type of use of the area.

There was no official announcement of the closure of the San Lorenzo River levee, but the Santa Cruz Parks and Recreation department can be reached by contacting: 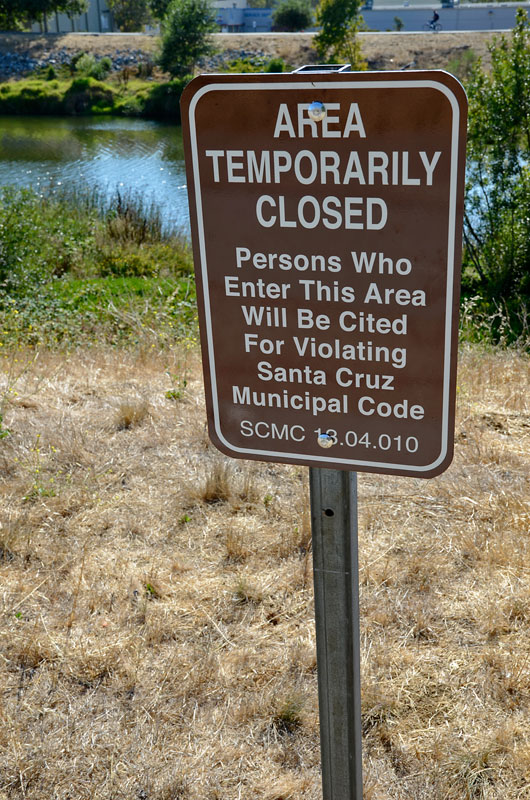 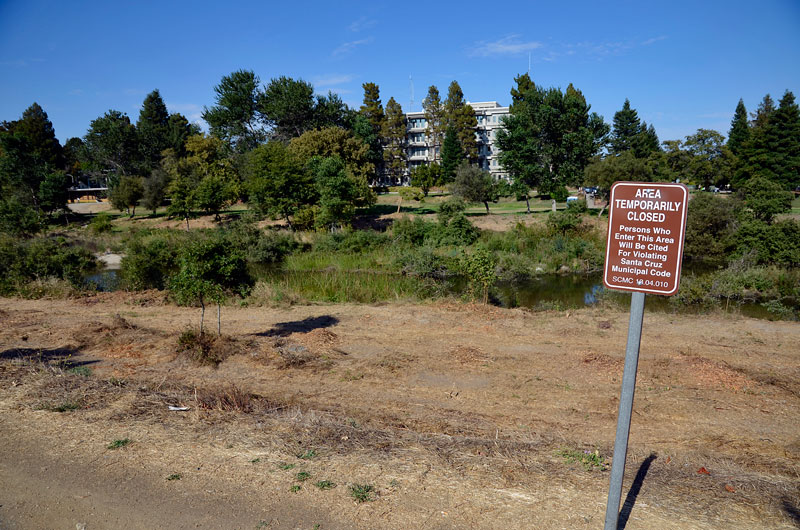 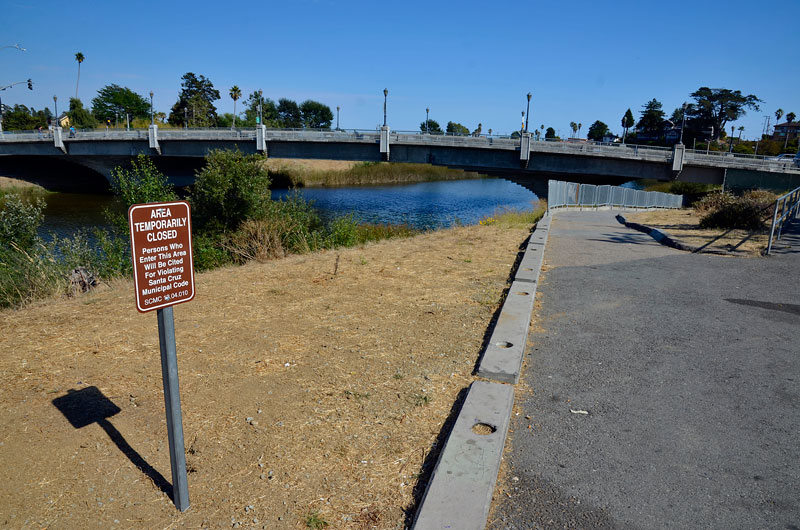 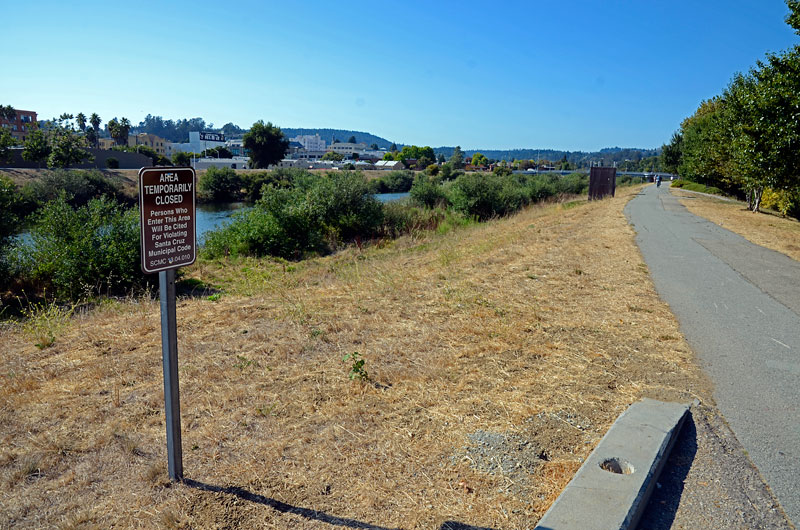 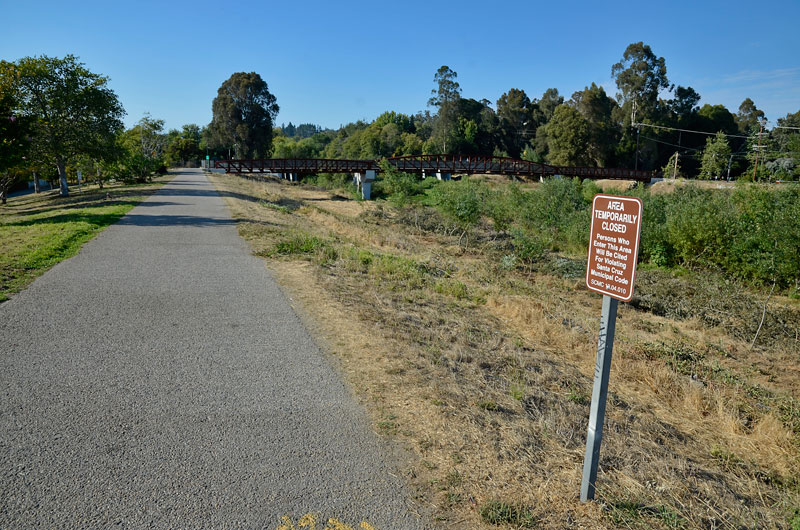 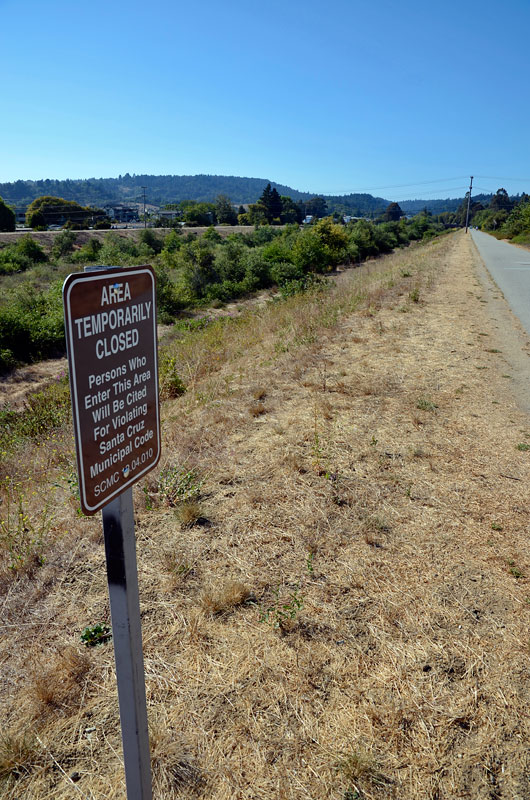 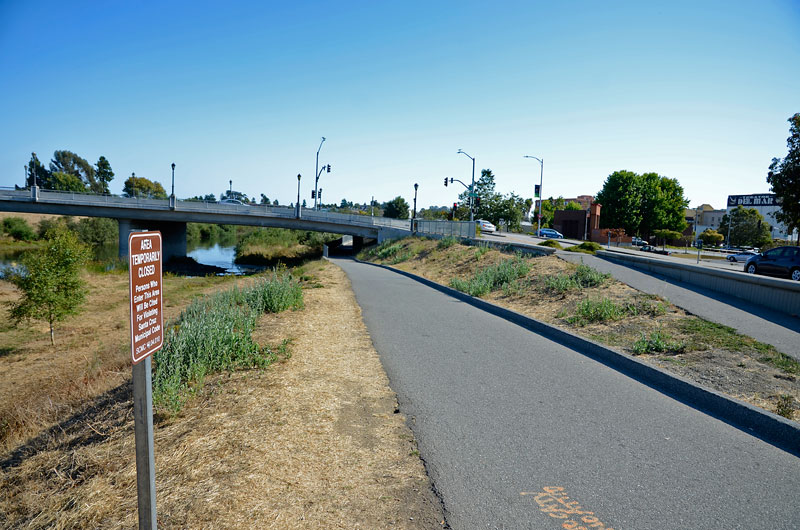 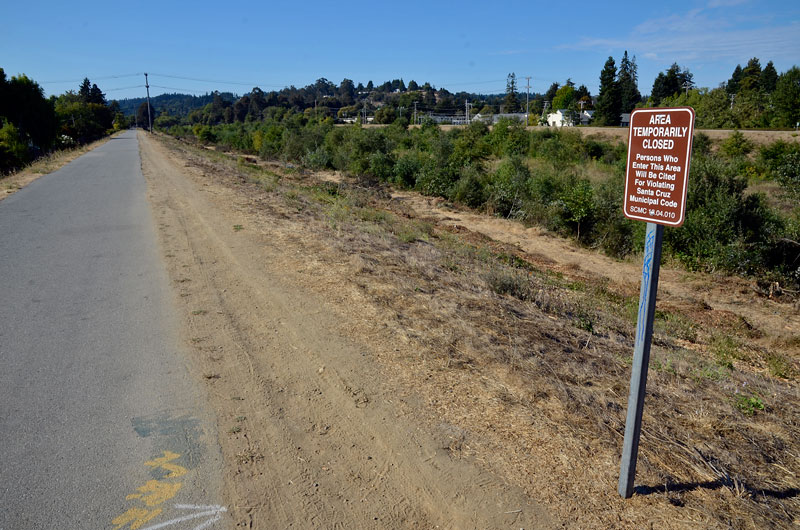 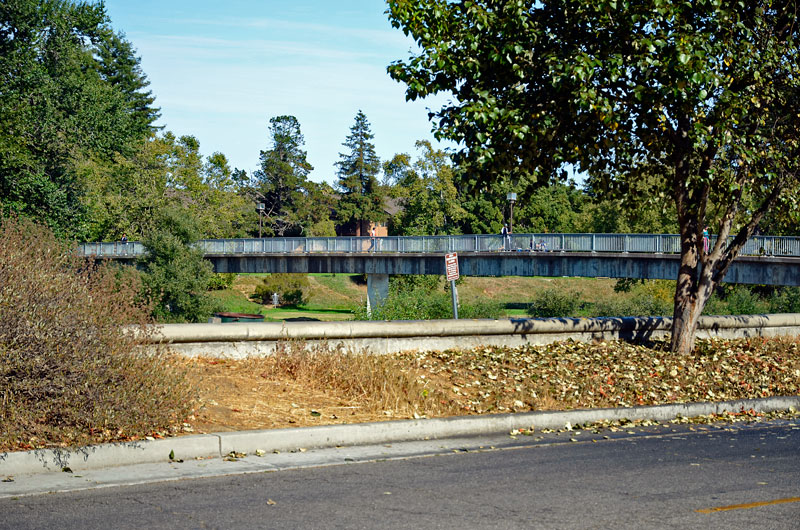 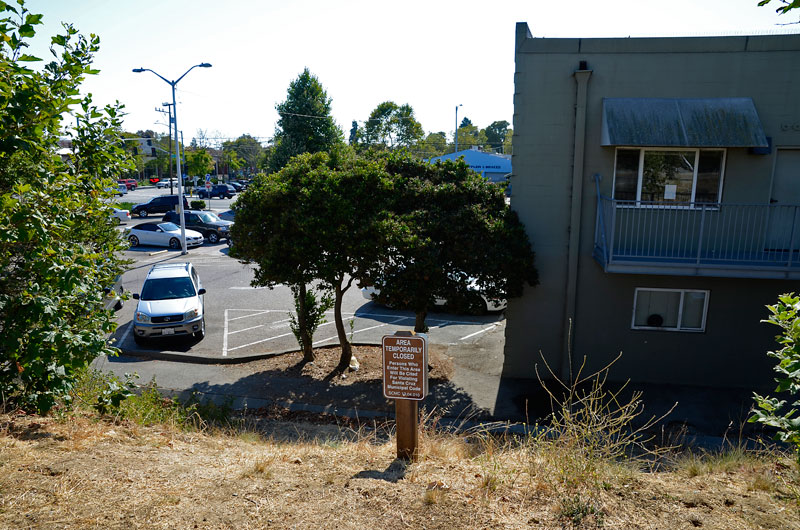 §Looking Towards Front Street at Cathcart
by Alex Darocy Tuesday Aug 14th, 2012 1:36 AM 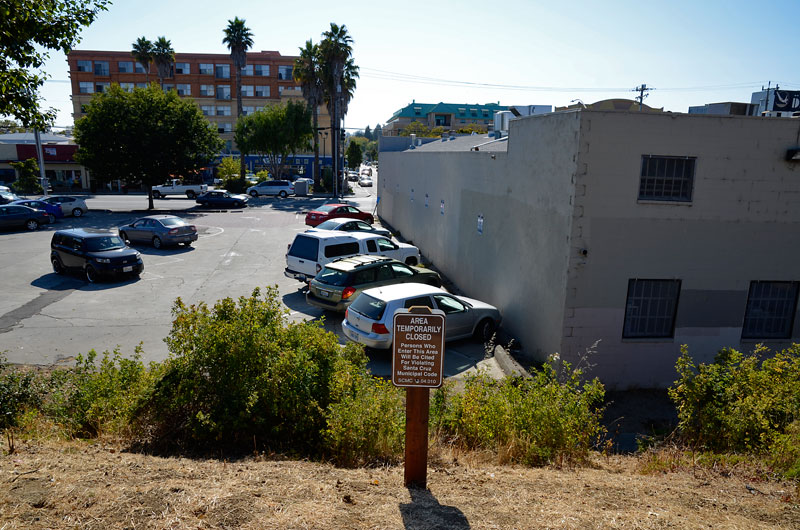 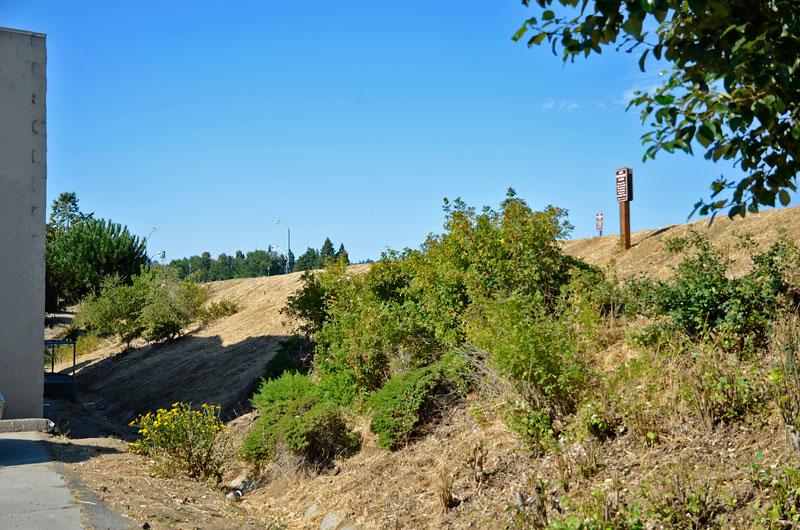 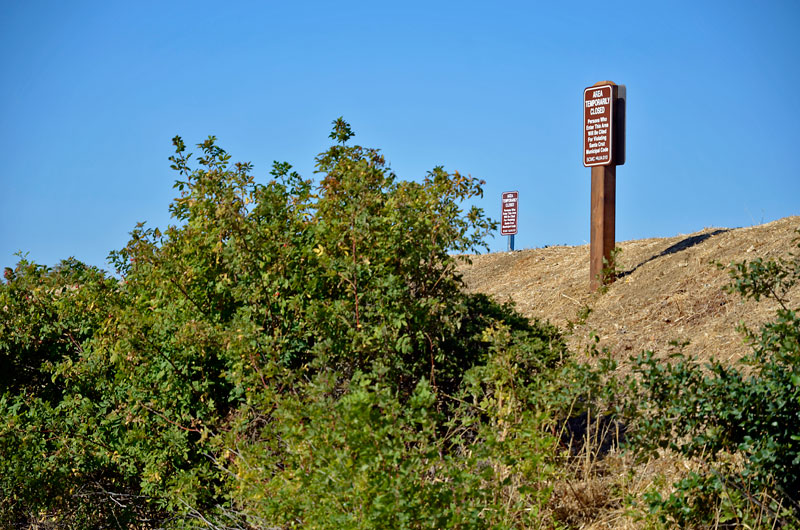 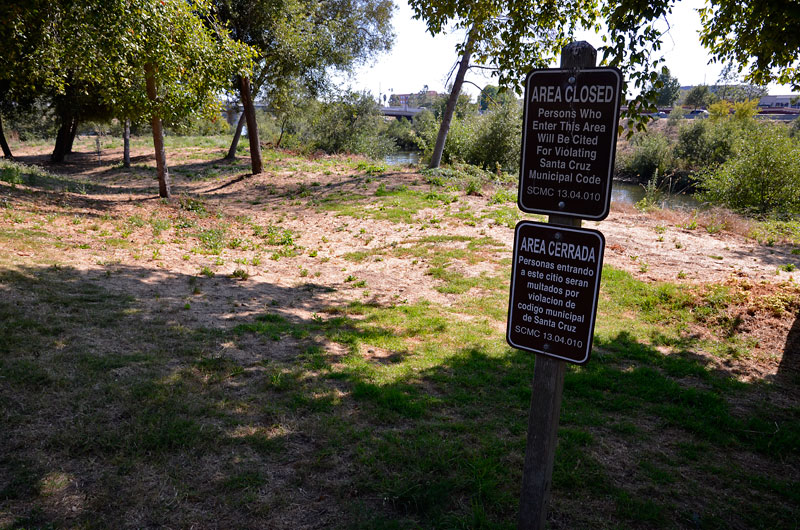 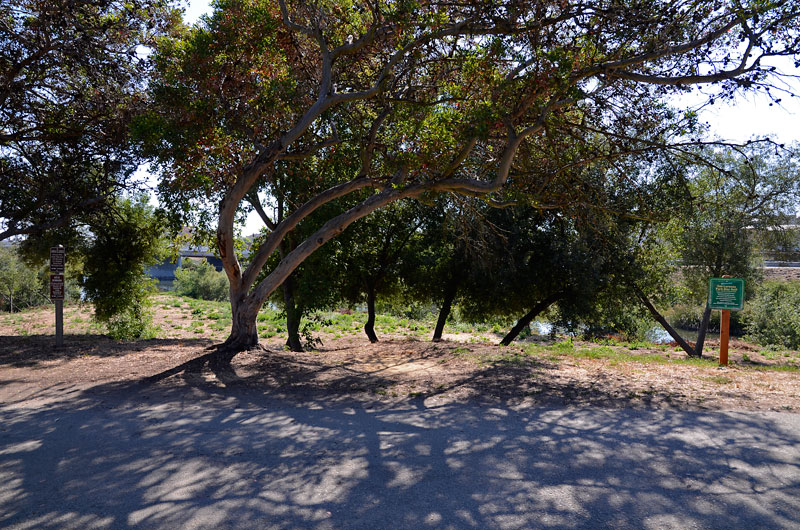 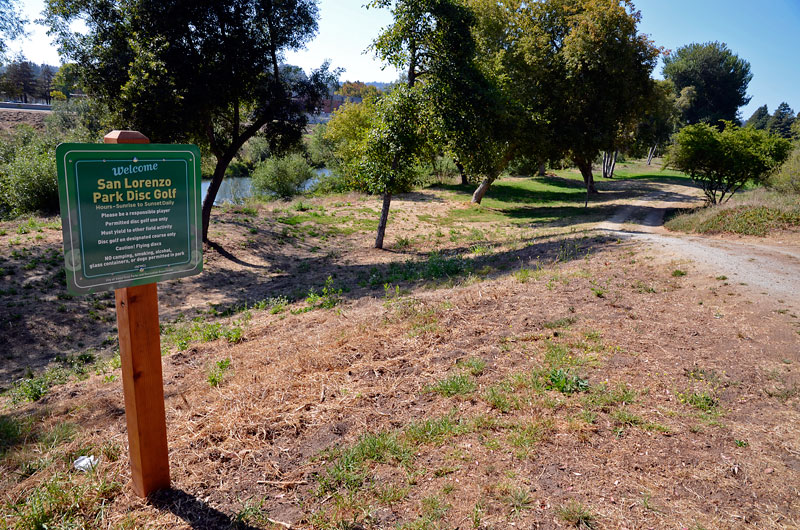 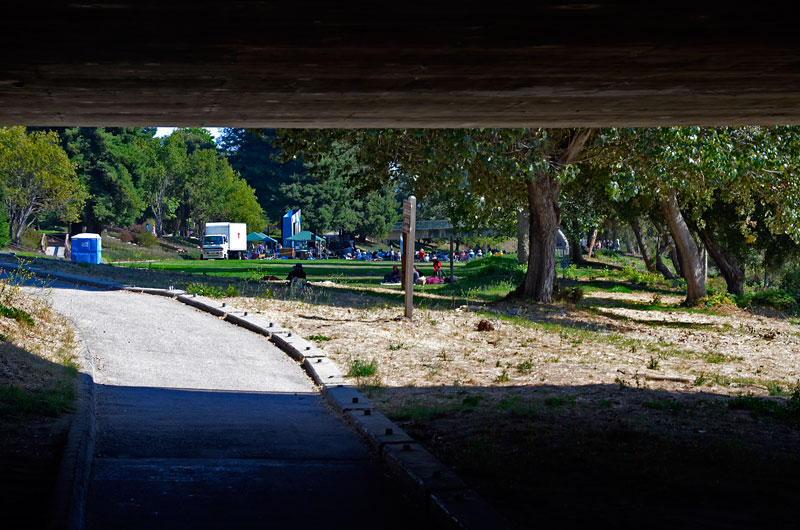 View of vegetation restoration sign, in the background the SF Mime Troupe performance can be seen.
§Vegetation Restoration Sign
by Alex Darocy Tuesday Aug 14th, 2012 1:41 AM 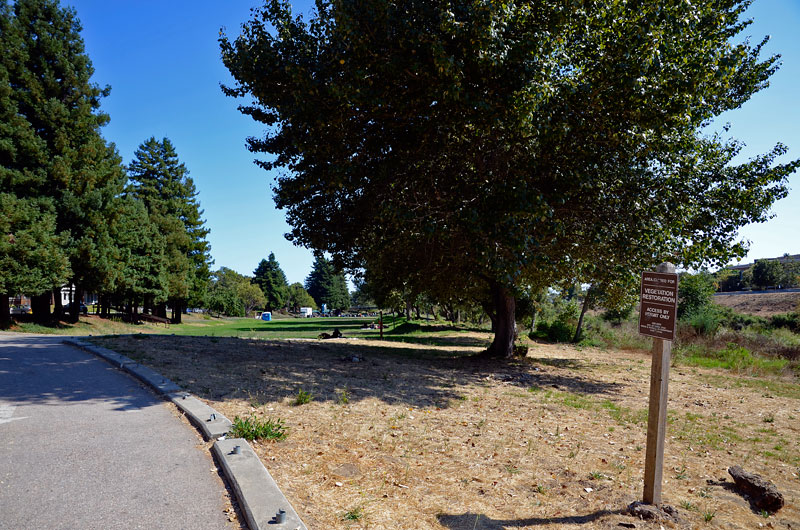 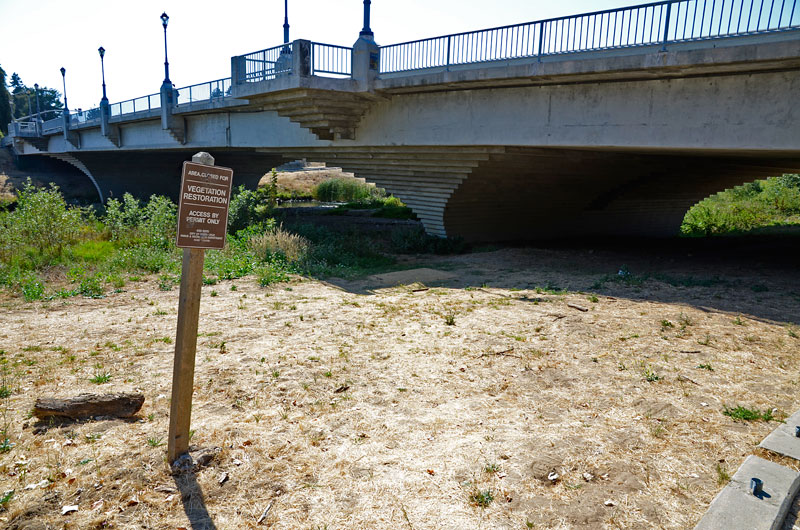 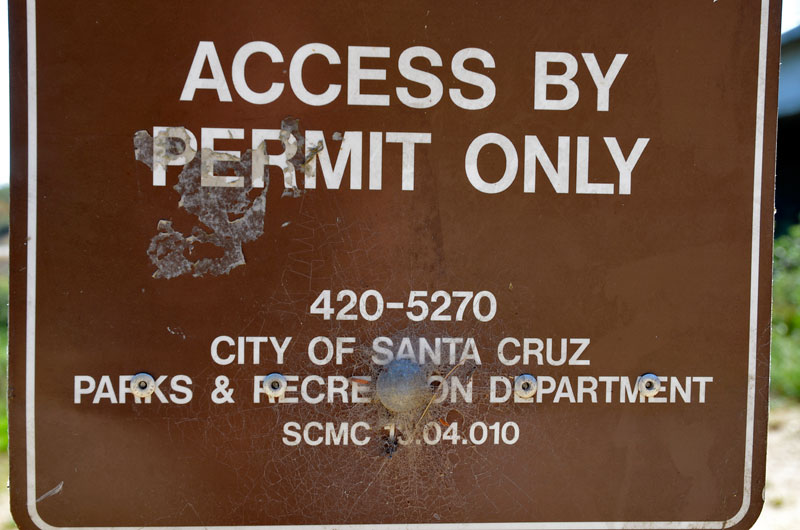 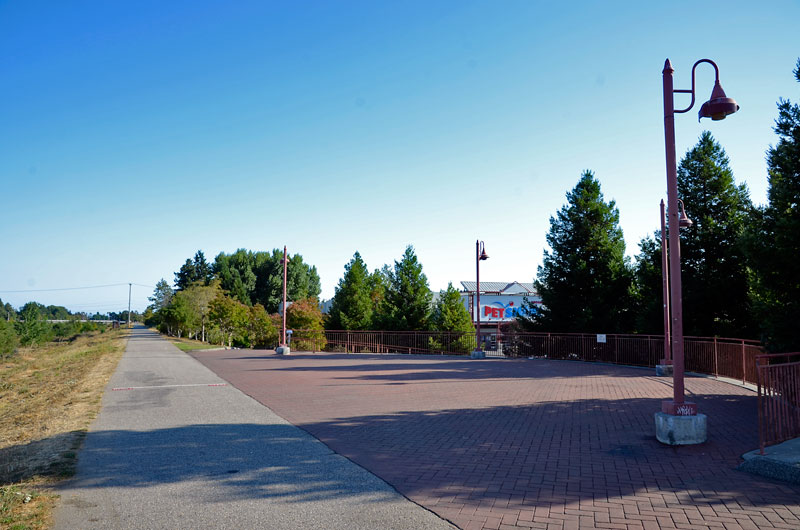 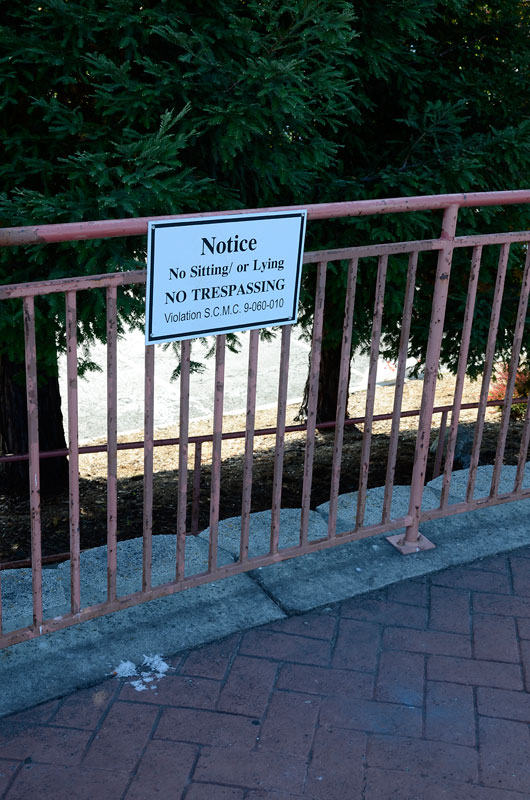 San Lorenzo River, view from Laurel Street Bridge.
Add Your Comments
LATEST COMMENTS ABOUT THIS ARTICLE
Listed below are the latest comments about this post.
These comments are submitted anonymously by website visitors.