Add an Event
Newswire
Calendar
Features
Home
Donate
From the Open-Publishing Calendar
From the Open-Publishing Newswire
Indybay Feature
Publish to Newswire
Add an Event
Related Categories: Santa Cruz Indymedia | Government & Elections
Update on the Two Mayors Trial Case
by Robert Norse
Friday Apr 12th, 2013 4:46 PM
The eleven-year-long lawsuit against the Santa Cruz City Council for an exclusion and false arrest back in March 2002 is now going to appeal before Judge Robert Whyte in Federal District Court. Late last year, an 8-person jury in November dismissed all damage claims against former Mayors Christopher Krohn and Tim Fitzmaurice. Eleven years ago, I was arrested at City Council for making a brief gesture of dissent (a silent mock-Nazi salute) and refusing to leave. The two attorneys involved are challenging the jury verdict with a response due from the City Attorney by May 5th. 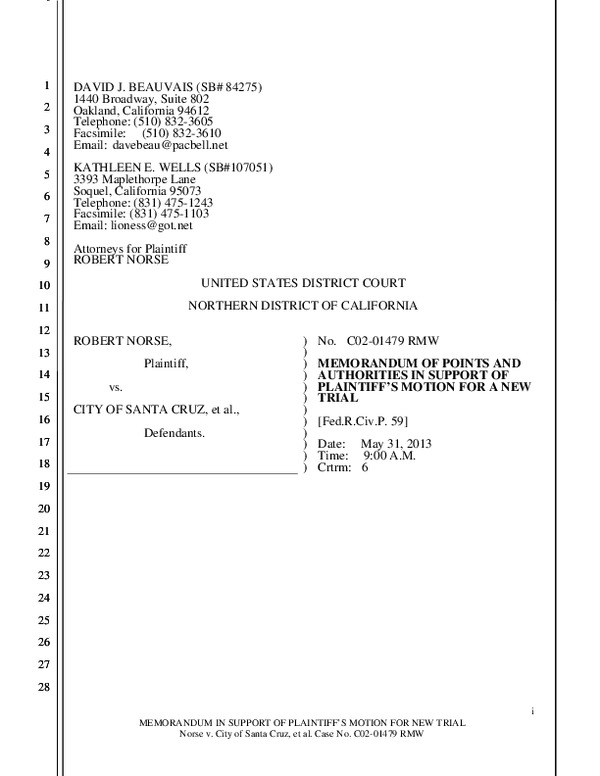 Download PDF (91.5KB)
This was a civil trial around the issue of the right of citizens to remain at City Council, even if Council members find their opinions and the expression of those opinions offensive. The 9th Circuit Court of Appeals had held that only an actual disruption can be the basis for a criminal charge of disrupting a public meeting. Hence the kind of arrest that Mayor Krohn--pressured by former Mayor Fitzmaurice--initiated was a false arrest. Indeed, even the Santa Cruz District Attorney's Office declined to file any criminal charges against me.

City Council declined to modify its "decorum" rules to comport with the First Amendment and the 9th Circuit Court of Appeals standards. They preferred to spend $125,000+ of the City's money defending the arbitrary and erroneous use of power by the Mayor to exclude outspoken critics from Council.

For more detail, follow links in the stories below.

§Unexpected Outcome
by Robert Norse Saturday Apr 13th, 2013 5:49 AM
The initial outcome of the trial (exonerating the Mayors) last November was a surprise to most of us. Even Chris Krohn told me he thought we'd won. My attorneys were upset and incredulous at the result.

In a recent conversation with Krohn, he told me for the first time suggested he'd probably made the wrong choice in ordering a "citizen's arrest". I'd been trying to get him for a decade to come out for a change in City Council rules to ensure that no one else would have to fear or suffer the same repression. Not sure he's gone that far, but it was interesting to hear.

Even if we Whyte refuses to order a new trial, the only thing we've been ordered to pay are essentially copying costs (which--after eleven years of litigation--are not inconsequential), but nowhere near the 125 G's that City Attorney Barisone's office squandered and paid itself on this case.

In the last decade Council has made no further arrests for those giving them a mock-Nazi high sign. I did so when former Mayor Coonerty threatened Occupy activists with arrest (see "Robert Norse Repeats Mock Nazi Salute at City Council Meeting" at http://www.indybay.org/newsitems/2011/11/09/18698345.php & the comments that follow the article).

The right to speak out (even to shriek out) provided there is no substantial disruption is one that even groups of strongly different opinions can understand. Even though I disagree with their anti-homeless thrust, I strongly support Take Back Santa Cruz's right to express its views at City Council, for example.
Add Your Comments
LATEST COMMENTS ABOUT THIS ARTICLE
Listed below are the latest comments about this post.
These comments are submitted anonymously by website visitors.