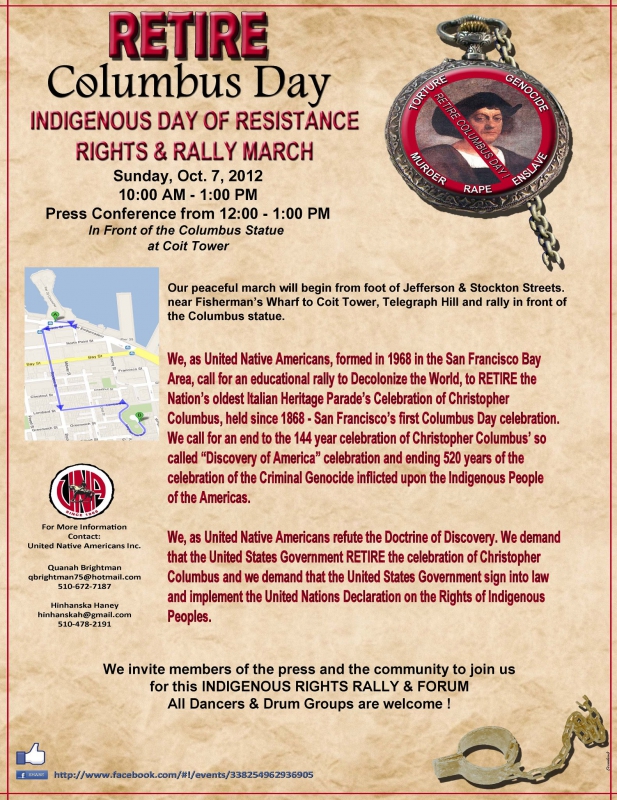 INDIGENOUS DAY OF RESISTANCE INDIGENOUS RIGHTS RALLY & MARCH to Decolonize the World on the Truth of Christoper Columbus & his Insidious Hate Crimes he Committed Against the Indigenous Peoples of The Americas Known as Turtle Island.

Press Conference from Noon to 1:00pm at Coit Tower in Front of the Columbus Statue


Ending the 144 Year Celebration of Christopher Columbus and Ending 520 Years and Counting of Genocide inflicted on the Indigenous People of the Americas.

1876 California accepted a Christopher Columbus and Queen Isabella Statue from Darius Ogden. The statue is displayed in the Rotunda of the State Capital. Valued at $30,000, it was crafted by Larkin G. Mead in Florence, Italy.

1892 President Harrison declared October 12, 1492 as the day America was discovered by Christopher Columbus.

1909 California declared October 12 a legal holiday, to be known as "Discovery Day."

1910 President Taft declared October 12 to be a legal U.S. holiday.

1915 The San Francisco Columbus Day Committee was organized by the Salesian Fathers of St. Peter and Paul's Church in the heart of North Beach.


Friend Us On Facebook.com
http://www.facebook.com/groups/unitednativeamericansinc


WE INVITE MEMBERS OF THE PRESS AND COMMUNITY TO JOIN US FOR OUR INDIGENOUS RIGHTS RALLY & FORUM
All Dancers and Drum Groups Are Welcomed!


Hinhanska Haney
hinhanskah [at] gmail.com
(510) 478-2191
END_OF_DOCUMENT_TOKEN_TO_BE_REPLACED
Added to the calendar on Wed, Sep 26, 2012 6:44PM
Add Your Comments
Latest Comments
Listed below are the latest comments about this post.
These comments are submitted anonymously by website visitors.
TITLE
AUTHOR
DATE
The Mystery of History
Beeline
1992 Columbus Parade Kicked Off Market Street
&
Long Overdue: Everyone knows Columbus can not Claim First Discovery of Turtle Island
Hence Forth
Support Independent Media
We are 100% volunteer and depend on your participation to sustain our efforts!