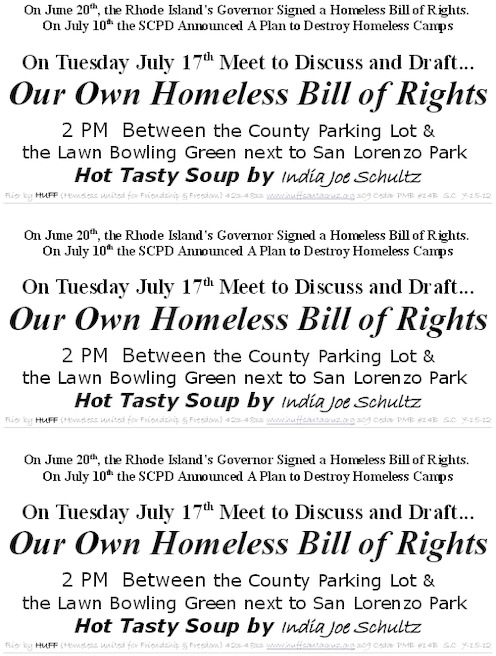 These all seem to work at the moment---but then the others did too a day ago.


A petition for a California Homeless Bill of Rights can be found at
http://www.change.org/petitions/the-ca-state-senate-enact-the-california-homeless-bill-of-rights

§broke links
by tgg
Monday Jul 16th, 2012 1:10 AM
About the bill.. I'm too sleepy to find them.. mr bumpersticker bat mobil night watchman maybe want to reach out and touch us some more..id like to read it.. links broke.. I'm lazy.. help..
Add a Comment
§And we're supposed to get this all done in one hour?
by Less is More
Monday Jul 16th, 2012 6:11 PM
Um, you've got quite a big agenda there. Who were you planning to have facilitate this? What are you thinking?!
Add a Comment
§Ex post facto
by RazerRay
Tuesday Jul 17th, 2012 7:34 PM
The above statement was prescient.
http://auntieimperial.tumblr.com/
Add a Comment
§Discussion of the Issue
by Robert Norse
Thursday Jul 19th, 2012 7:49 AM
Santa Cruz Patch in its puffpiece summary of the current candidates for City Council touches on this issue at http://santacruz.patch.com/articles/santa-cruz-expects-heated-local-elections-in-november?ncid=newsltuspatc00000001#comment_4022721 .

Check it out. Add your latest reports and thoughts.
Add a Comment
Support Independent Media
We are 100% volunteer and depend on your participation to sustain our efforts!