Add an Event
Newswire
Calendar
Features
Home
Donate
From the Open-Publishing Calendar
From the Open-Publishing Newswire
Indybay Feature
Publish to Newswire
Add an Event
Related Categories: East Bay | Global Justice & Anti-Capitalism | Police State & Prisons
May Day Oakland Police Riots: OPD Violate Their Own Crowd Control Policy Yet Again, 5/1/12: video
by Dave Id
Friday May 4th, 2012 4:21 PM
At the tail end of International Workers' Day in Oakland — a day when Oakland police repeatedly instigated riots and near-riots by charging into non-violent crowds to attack individuals by shoving them over, using batons, tasers, and tear gas along the way — OPD decided to go with an age-old tactic of theirs, using their motorcycle fleet of Harley Davidson's and dirt bikes to intimidate and charge at a small crowd of journalists, protesters, and onlookers. This tactic, however, to disperse a crowd using police vehicles, happens to be expressly forbidden by the Oakland police department's own federally court-ordered Crowd Control Policy. (Video below) 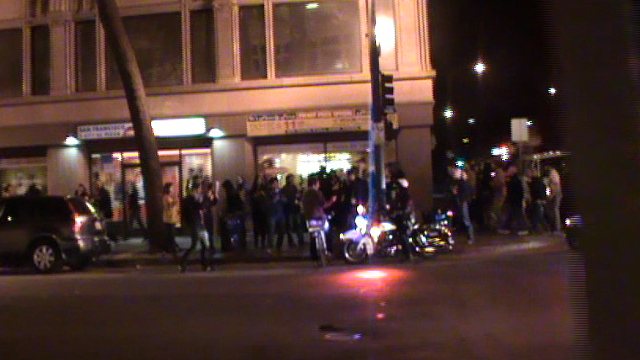 [Pictured above: Oakland police officer charges his motorcycle straight at a person who appears to be taking photographs.]

As clearly forecast by Copwatcher prior to May Day 2012, "sending teams of Officers that are known for their relationship to violence into large crowds of people is a clear indication that OPD intends to incite panic and chaos rather than develop better methods for interfacing with large groups of people." To varying degrees, this is largely what happened throughout the day in Oakland, including in the evening as police decided to push a group of about thirty people up Broadway away from City Hall. Perhaps a third or more of those being pushed up the sidewalk from 14th to 17th Street were journalists.

While Oakland motorcycle police were not seen by this reporter to have actually struck any journalists, demonstrators, or passers-by with their vehicles, certain OPD officers sure came close, charging their bikes rapidly toward whomever they pleased. This aggressive behavior is not even in line with OPD's shocking former policy of allowing motorcycles to "bump" protesters, on the condition that the motorcycles were moving at walking speed, that the officers gave warning to the protester beforehand, and that the officer at least consider what might happen if the protester were to fall over in front of the motorcycle.

BUMPing ("Basic Use of Motorcycle Push Technique," as OPD euphemistically called it) is now expressly prohibited in Oakland's current crowd control policy. Not only that, but the current policy further declares that "Motorcycles and police vehicles may not be used for crowd dispersal." The policy allows for vehicles to be used for "visible deterrence" but OPD's motorcycle fleet went beyond that on May Day, as shown in the video below. As to whether OPD actually bumped anyone with their motorcycles, perhaps that will be clarified with video, photos, and/or witness testimony that comes forward in the future from those who were herded on the sidewalk that evening.

It should be noted that if somebody moves their car or motorcycle towards a police officer, at any speed, and even just a few feet forward, police commonly open fire on the driver and kill them, deeming the vehicle to be a weapon, a direct threat. Police and District Attorneys regularly give such killings little second thought, writing them off as a justifiable homicide in self-defense. But police charging vehicles at journalists and protesters, that apparently is just a part of the job here in Oakland. A genuine investigation, officer discipline, or criminal charges should not be expected based on the long history of police unaccountability for violence against citizens in Alameda County.

Not surprisingly, Alameda County District Attorney Nancy O'Malley has yet to file charges against any Oakland police department or mutual aid officers for the malicious violence they have perpetrated against Occupy Oakland protesters or journalists covering the story. Not for shooting Scott Olsen in the head at close range with a beanbag round, not for lobbing a flash-bang grenade into a crowd attempting to assist Scott Olsen on the ground, not for beating Kayvan Sabehgi until his spleen ruptured, not for shooting Scott Campbell in the leg as he videorecorded a police line, and not for the countless others beaten and shot with police projectiles.

Indeed, when looking over the long string of killings of unarmed people of color by police in Oakland, it was a complete aberration when O'Malley's predecessor, District Attorney Tom Orloff, filed Second Degree Murder charges against BART officer Johannes Meserle for the killing of Oscar Grant. That charging was primarily due to the extremely rare circumstance of Mehserle having been captured on multiple videos shooting Oscar Grant in the back, combined with an exceptionally fervent demand for justice from the community.

OPD apparently can't even keep up with the thousands of complaints it has received regarding police behavior at Occupy Oakland demonstrations. And even if OPD had the capacity to follow up procedurally with the physical injuries it has caused so many people in just the last six months, it is doubtful that an Internal Affairs department staffed by many of those who have made careers out of abusing and killing Oaklanders would do much about it. Officers who are known to have participated in beating deaths and cover-ups, such as Captain Edward Poulson, who is still with the force, have been promoted to head of Internal Affairs in the past.

So, while community and police accountability activists have solid concerns regarding a federal takeover of the Oakland police force, it may be that an order placing the department under federal receivership by US District Court Judge Thelton Henderson is the only way to shake up the recalcitrant department. It does appear that Henderson's patience is finally wearing thin, nearly ten years after Oakland police violently attacked a peaceful anti-war demonstration at the Port of Oakland and the City signed on to the Negotiated Settlement Agreement as a result of the Rider's case. In late 2011, Judge Henderson empowered a court monitor to oversee all major decisions within the department. And now with new reports coming out admonishing OPD for their "overwhelming military-type response" to Occupy Oakland and the "outright stagnation in the overall compliance picture," Judge Henderson this week ordered OPD to submit a credible plan by this coming Monday on how it intends to deal with the backlog of complaints over officer violence against demonstrators.

And yet, with all this pressure upon them, OPD still couldn't help themselves but continue to violate their own crowd control policy on May Day.

OPD Takes More Steps Backward
Chief Jordan announces new a crowd-control policy that civil rights lawyers say is weaker than the old one as a new report criticizes the department for making no progress on its reforms
May 02, 2012

Oakland police may face sanctions over handling of Occupy protests
May 2, 2012 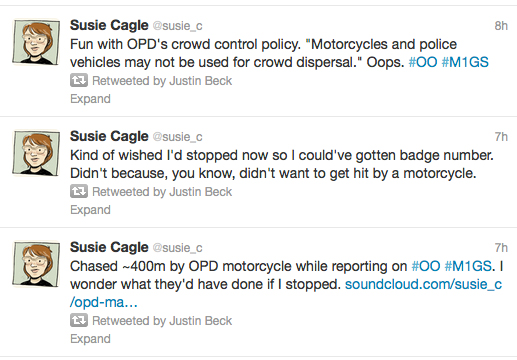