by Dave Id
With May Day 2012 approaching, Occupy Oakland held a press conference to discuss the actions expected throughout downtown Oakland on Tuesday, May 1st. Plans include support for workers at the Golden Gate Bridge, a work stoppage by ILWU Local 10 which will effectively shut down the Port of Oakland for the day, a one-day strike by thousands of California Nurses Association Bay Area nurses, a large March for Dignity and Resistance from Fruitvale to downtown, and much more. Speaking at the press conference were Leo Ritz-Barr of Occupy Oakland's Events Committee; Lauren Smith of Occupy Oakland; Clarence Thomas, 26-year member of International Longshore and Warehouse Union Local 10 and co-chair of the Million Worker March Movement; Rochelle Pardue-Okimoto, an Alta Bates nurse with the California Nurses Association and National Nurses United; Irene of the Oakland Occupy Patriarchy working group; and Jessie of the Occupy Oakland Anti-Repression Committee (full video below).

Leo Ritz-Barr discusses Occupy Wall Street's call for a nationwide General Strike and the history of May Day, from the Oakland General Strike in November 2011, to the Immigrant Rights May Day nationwide in 2006, back to the Haymarket Massacre in Chicago in 1886 leading to the 8-hour workday. Leo Ritz-Barr details actions centered around downtown Oakland, beginning at 6am when buses will load at 14th and Broadway for the trip to the Golden Gate Bridge in San Francisco, a mass rally downtown at noon, and the late afternoon arrival of the March for Dignity and Resistance from East Oakland.

Lauren Smith of Occupy Oakland further discusses events planned for May Day, including a protest against the court-ordered stay-away orders requested by Alameda District Attorney Nancy O'Malley's office and granted by local courts. She adds that the great success of Occupy Oakland is that it has been built upon years of diverse struggles for justice in the East Bay.

Clarence Thomas speaks about the state of Labor in America today and the difficulties in organizing. He says one of the main missions of the Million Worker March Movement started by the ILWU in 2004 was to reclaim May Day.

Rochelle Pardue-Okimoto discusses the struggles of nurses in the Bay Area against profiteering cut-backs on patient care and worker compensations made by hospital corporations. She details some of the Sutter hospital locations at which nurses will take action across the Bay Area.

Irene of Oakland Occupy Patriarchy announced that an 8:30am rally and speakout at main Child Protective Services building at 401 Broadway will protest wrongful treatment and discrimination against Oakland families.

Jessie of the Occupy Oakland Anti-Repression Committee discusses the over-700 arrests made by Oakland police against Occupy Oakland demonstrators since October and OPD's recent announcement that they will be making crowd control policy reforms despite the fact that they have been mandated by a federal court to abide by a more stringent set of policies to which they have not yet fully adhered.

OCCUPY OAKLAND PREPARES FOR GENERAL STRIKE ON MAY DAY

On May 1st, Occupy Oakland will join protesters nationwide in support of Occupy Wall Street’s call for a national general strike. Like Occupy Oakland’s historic general strike on November 2, mass protests will converge on 14th and Broadway. Students and workers, employed and unemployed, documented and undocumented, unionized and not, will walk out of their classrooms and shut down their workplaces in solidarity with nationwide struggles against the 1%. May 1st, also known as May Day, is significant because in 1866 workers united to win the 8 hour work day, in 2006 undocumented workers mobilized millions of people in one of the largest work stoppages in United States history, and in 2012, traditional labor and precarious workers will strike together for the first time.

Occupy Oakland protests will occur throughout downtown Oakland starting early Tuesday morning. Buses will meet at 19th Street and Telegraph Avenue at 6:00am to take people to San Francisco for the action at the Golden Gate Bridge. From 8:30am to 12 noon, strike stations will target the 1% and their enablers with flying pickets and other actions. Occupy Oakland will also be supporting pickets, walkouts, work stoppages, and any other union actions throughout the Bay Area.

The great success of Occupy Oakland and the Occupy movement in general is that it has built upon years of organizing around issues ranging from corporate greed to police brutality against communities of color, served as meeting point for activists engaged in these diverse struggles, and energized people who were previously not politically active. In Oakland and nationwide, Occupy has continued to do so in the face of intensified state repression and police violence. The diversity of actions on May Day will demonstrate the connections that have been made between the different kinds of work and the different forms of struggle that Occupy Oakland and the Occupy movement have brought together.

For more info on Oakland and other Bay Area May Day actions: http://strikemay1st.com/ 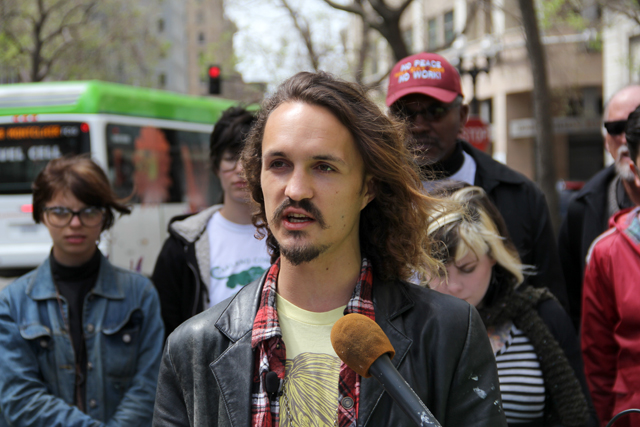 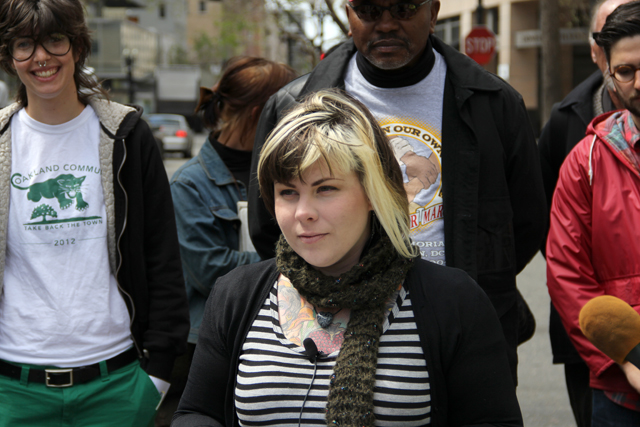 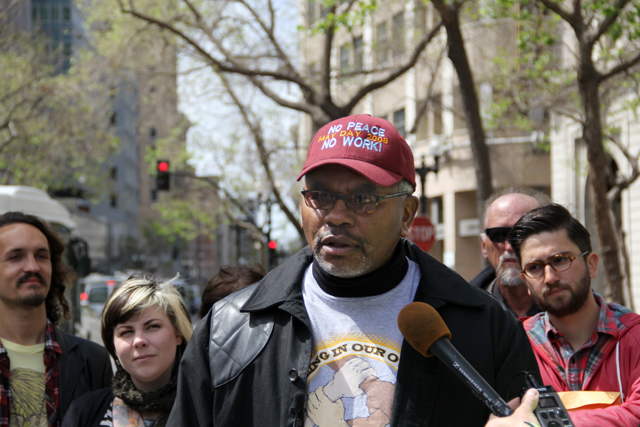 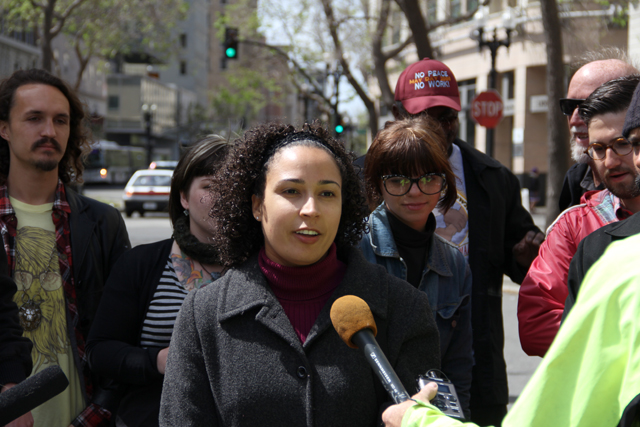 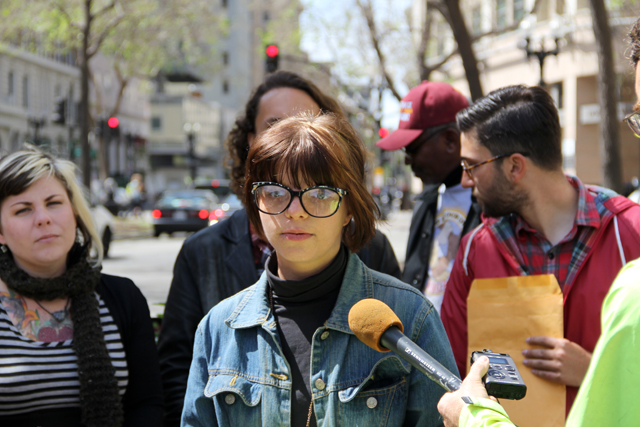 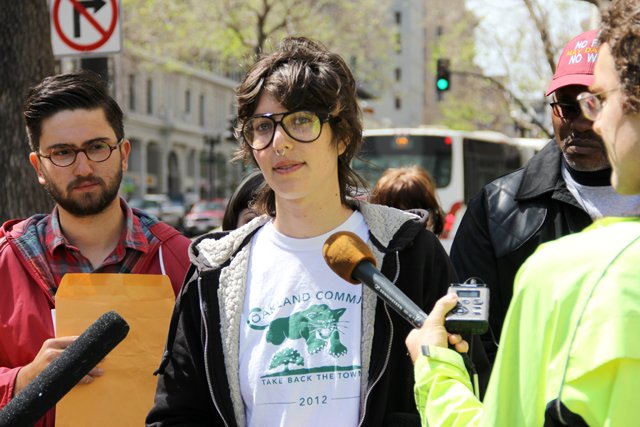 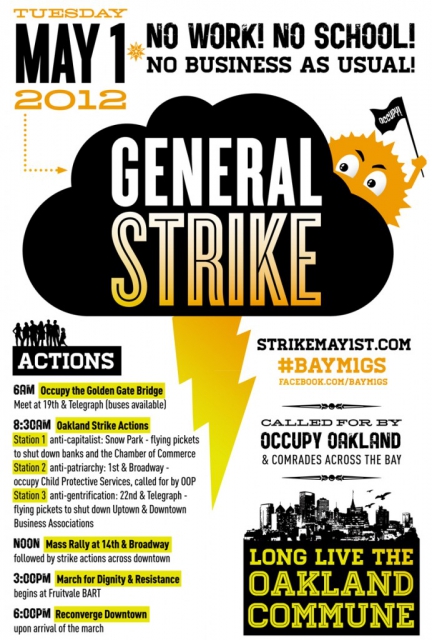 original image (692x1024)
END_OF_DOCUMENT_TOKEN_TO_BE_REPLACED
Add Your Comments
Support Independent Media
We are 100% volunteer and depend on your participation to sustain our efforts!