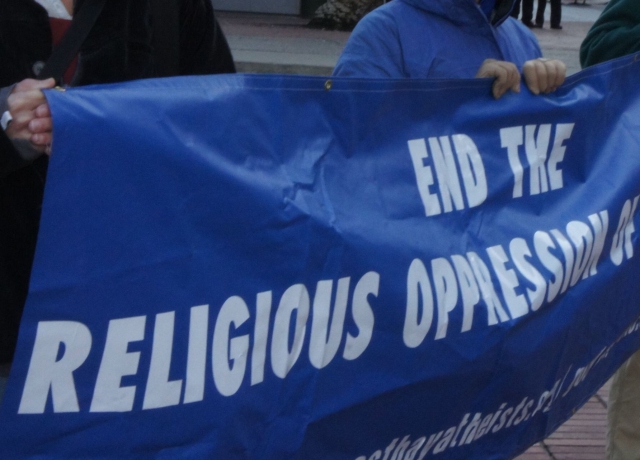 original image (1784x1285)
Quotes from an article California Catholic Daily published one week after the annual Walk for Life event.

"ABC TV did a decent job covering the event. KTVU television had an article, but no video, on its website with the lead: 'Several thousand anti-abortion activists marched in San Francisco Saturday…' Their own article later contradicted their own lead by kicking their estimate up to 10,000. That was it for TV. NBC TV: nothing. CBS TV: nothing. ...

The only article the San Francisco Chronicle, the city’s major daily, did on the Walk For Life West Coast was prior to the event -- and that C.W. Nevius’ column advising San Franciscans to ignore it! His editors, at least, appear to have taken his advice. The paper did send photographer Michael Macor to cover the event. He took some nice shots. They reproduced one in their newspaper. No article accompanied the photo.
Contrast this with the Chronicle’s coverage of Occupy Wall Street."

Indybay.org is a website that pushes a smorgasbord of leftist causes. Their “Womyn” page had an entry for January 21 -- “West Coast Rally for Reproductive Justice.” It was a photo essay about the tiny pro-abortion crowd at Justin Herman Plaza. The author wrote, “Reviewing the news coverage on NBC, CBS and ABC SF Bay Area affiliates, the pro-choice rally was given good coverage. The TV newscasters gave their ‘oh, here they come again, yawn’ coverage of the gathering in Civic Center and by now ho-hum march of thousands of dazed looking outsiders.”
http://www.indybay.org/newsitems/2012/01/2...
Add Your Comments
LATEST COMMENTS ABOUT THIS ARTICLE
Listed below are the latest comments about this post.
These comments are submitted anonymously by website visitors.