by Dave Id
After a long day of General Strike marches and bank closures throughout downtown, and the shutdown of the Port of Oakland by tens of thousands of demonstrators, the former Travelers Aid Society building on 16th Street, just north of Oscar Grant Plaza, was briefly occupied starting at about 10pm. Banners were hung from the roof on the front and side of the building while books were sorted for what was to be a public library in the "Raheim Brown Community Center" and hundreds of people danced and conversed in the street outside. Barricades were slowly erected at both ends of 16th Street using found materials from the vicinity. Shortly before midnight, hundreds of Oakland police in riot gear arrived at the intersections of 17th Street and San Pablo and Telegraph Avenues, with the clear majority on Telegraph. Just over five minutes later, garbage cans that made up a portion of the barricade on Telegraph were set on fire. In another five minutes police at the intersection of 17th and Telegraph began to fire massive amounts of tear gas toward the intersection of 16th, Telegraph, and Broadway. It was enough gas that the air in the streets for blocks was unbreathable, as the cloud expanded and wafted toward Franklin Street, 14th Street, and surrounding areas. The roughly two hundred police at 16th and Telegraph moved forward, pushed their way through the barricade on Telegraph, and marched down 16th Street toward San Pablo, meeting the relatively small police line that had moved up San Pablo south toward Oscar Grant Plaza. Police lines were set up to prevent public access back onto 16th Street and into or out of the plaza at the north side on San Pablo. A large number of demonstrators stood near the fountain inside the north end of the plaza, facing the San Pablo police line. Using a loudspeaker in the back of an SUV, police declared those remaining near the fountain under arrest at about 12:45am, asking arrestees to walk forward towards the hundreds of police on San Pablo and surrender. At about 1:10am, a large phalanx of perhaps 150 riot police left San Pablo, marched down Clay Street, and entered the plaza from the west side behind the demonstrators by the fountain. Tear gas and flash bang grenades were used to disorient arrestees, while one to two officers grabbed and detained one arrestee each. The hundred arrestees, once in plasticuffs, were brought to the median strip on San Pablo for identification and to await a large San Mateo County Sheriff's bus and several Alameda County Sheriff's vans to transport them to either Santa Rita or North County/Dwyer jail. Amongst those arrested were four National Lawyer's Guild legal observers and three occupation medics. At least one additional woman was arrested while riding her bicycle past a police line. Seventy-six men and twenty-five women were arrested, as tallied by a NLG legal observer who was not arrested. 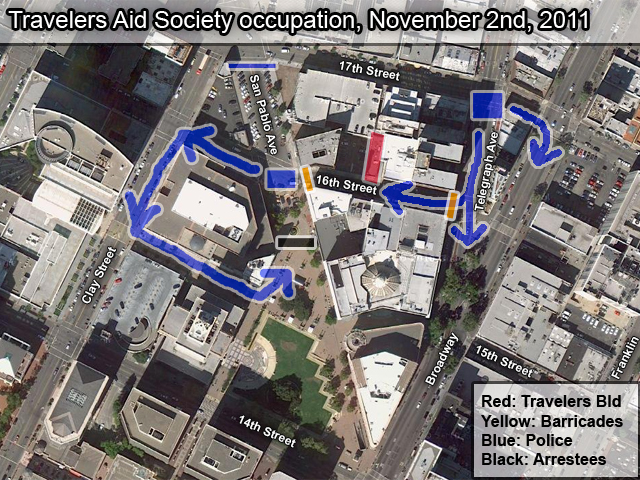 For more information:
END_OF_DOCUMENT_TOKEN_TO_BE_REPLACED
§Standing on early barricade at 16th Street and Telegraph
by Dave Id 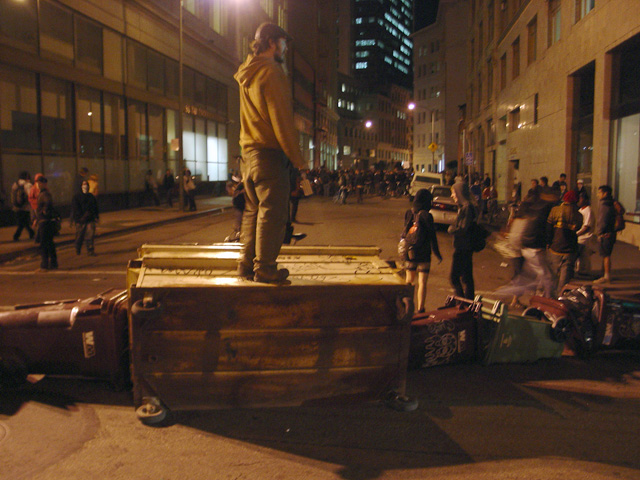 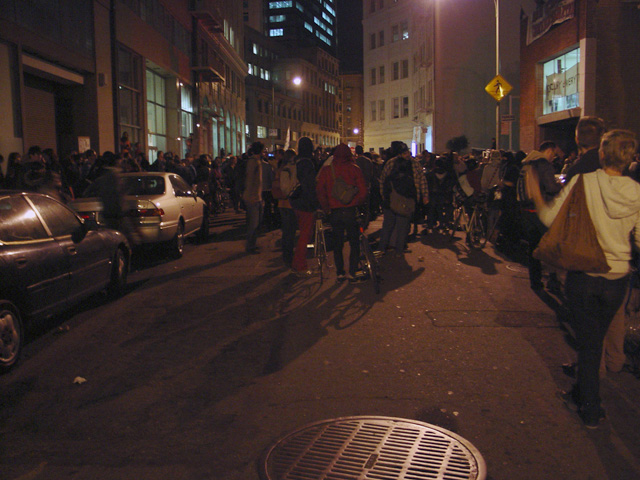 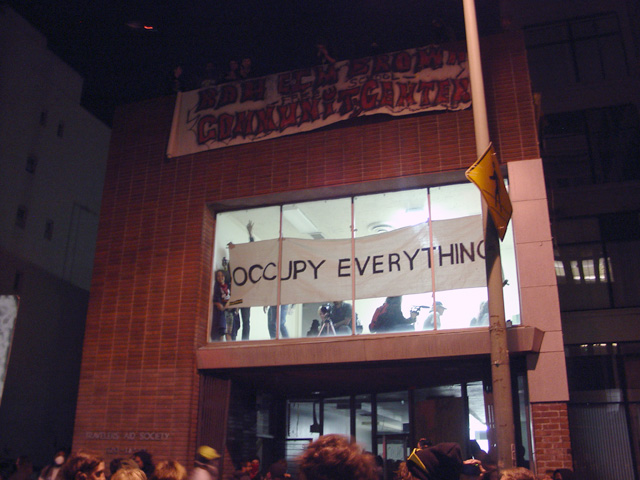 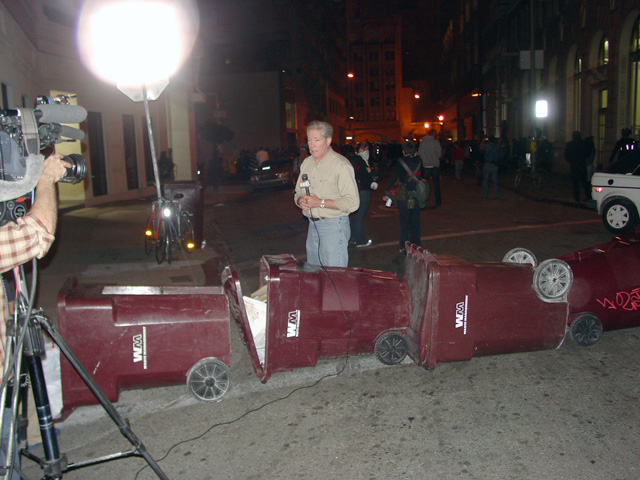 Well my name is Dick Doolittle and I'm a reporter from Grime magazine and we'd like you to comment on the tragic riots
http://www.indybay.org/newsitems/2010/07/10/18653434.php 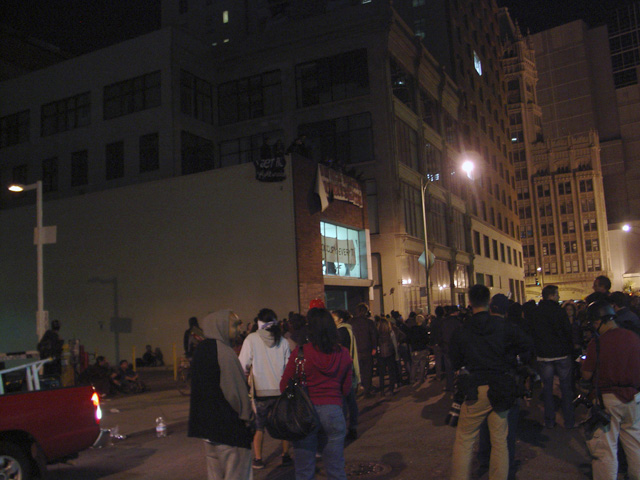 END_OF_DOCUMENT_TOKEN_TO_BE_REPLACED
§Looking out to the street below
by Dave Id 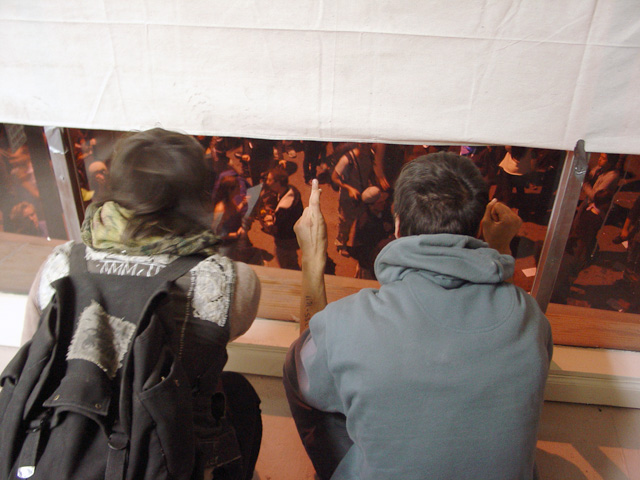 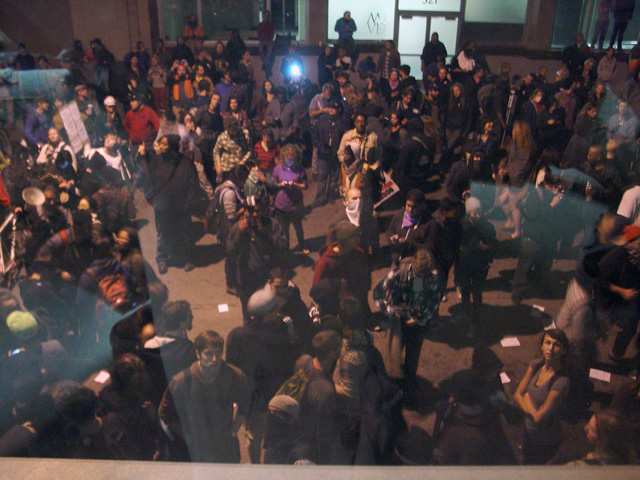 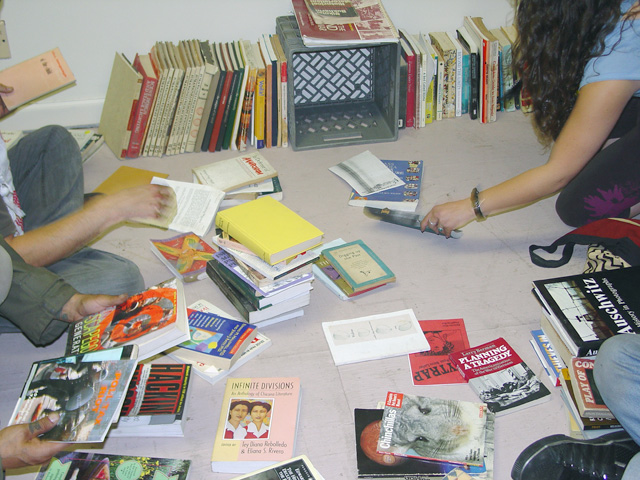 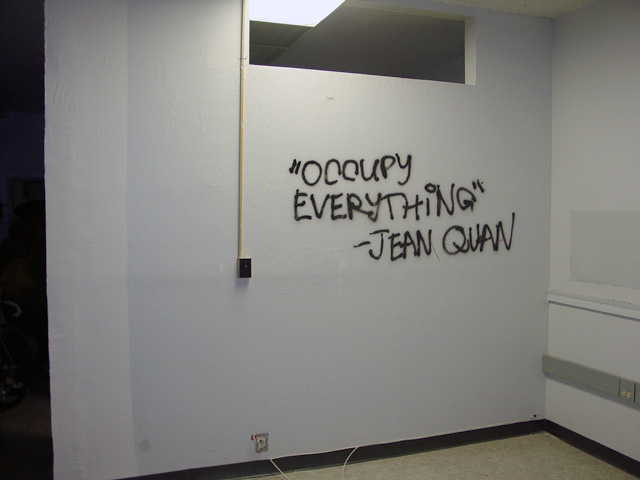 END_OF_DOCUMENT_TOKEN_TO_BE_REPLACED
§I Love My Hometown!
by Dave Id 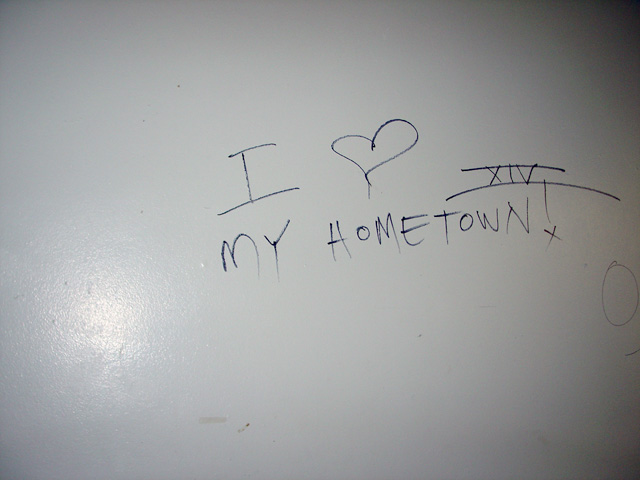 Not sure why the gang sign "14" is there. It's not usually written around cutsy sayings with hearts. Perhaps it's to add a sense of street authenticity somehow.
END_OF_DOCUMENT_TOKEN_TO_BE_REPLACED
§Looking out of front door
by Dave Id 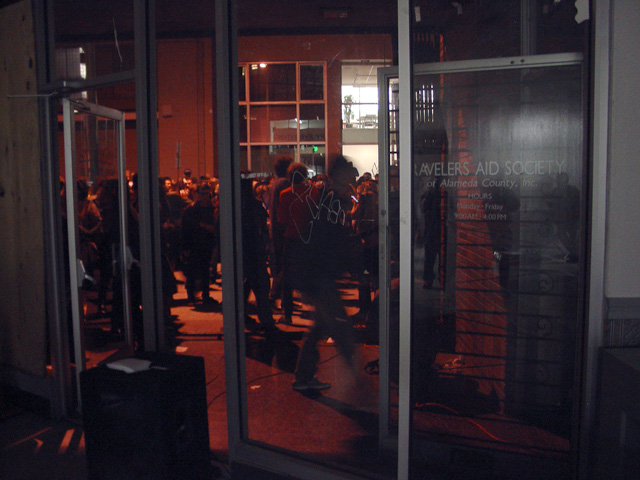 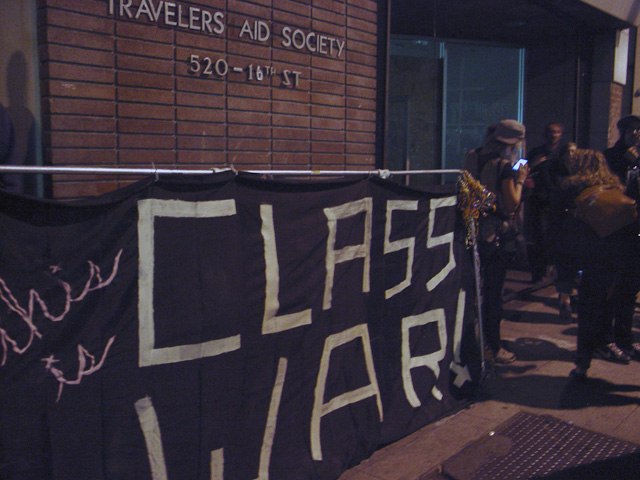 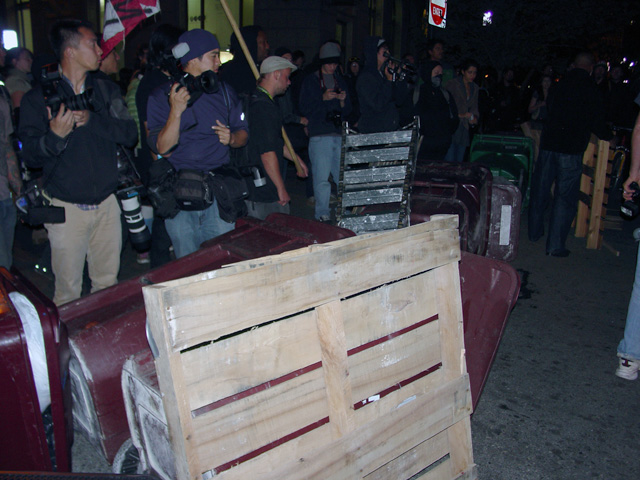 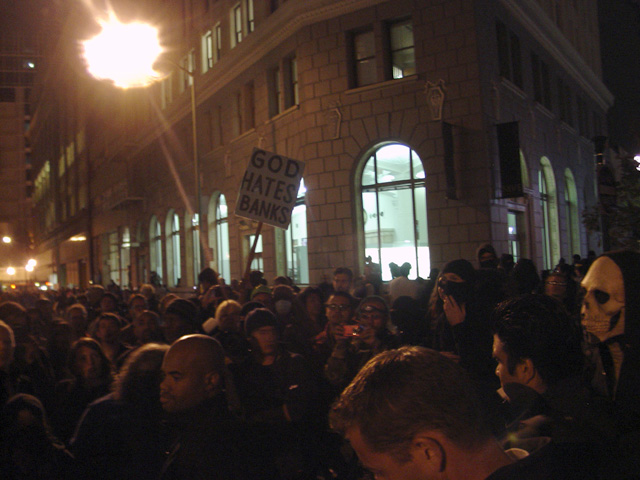 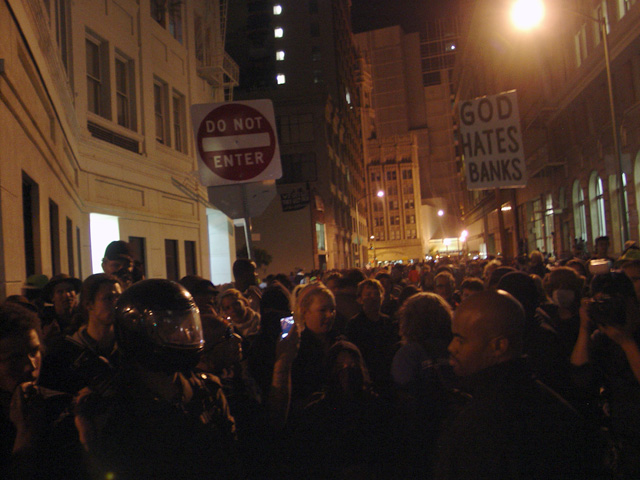 END_OF_DOCUMENT_TOKEN_TO_BE_REPLACED
§Banner on side of building reads, "We Get Cut. They Get Rich."
by Dave Id 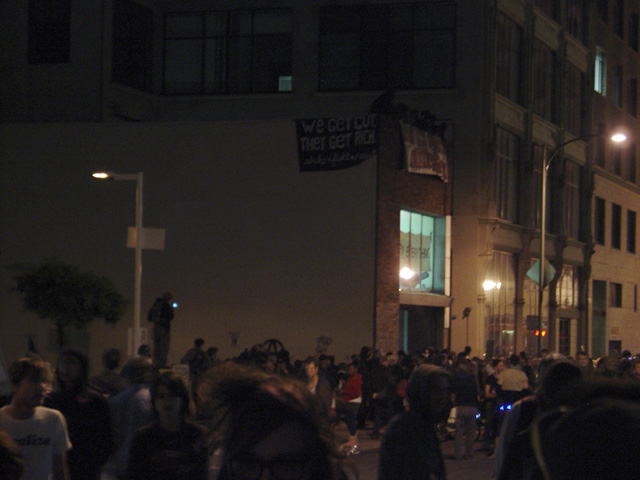 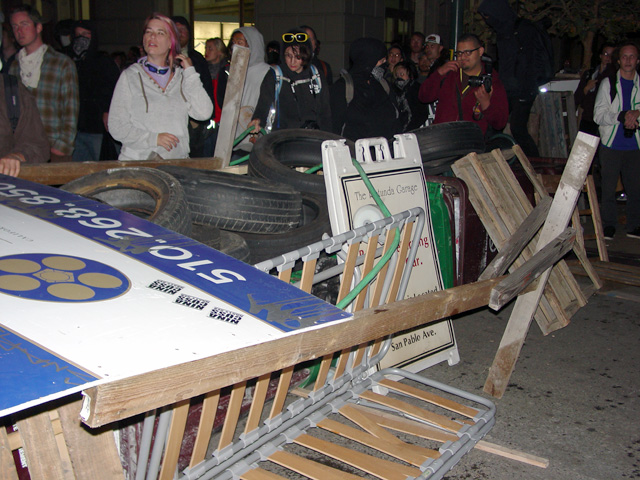 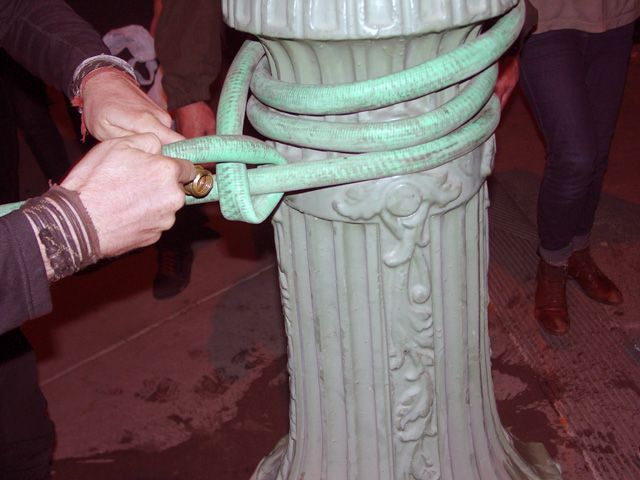