Add an Event
Newswire
Calendar
Features
Home
Donate
From the Open-Publishing Calendar
From the Open-Publishing Newswire
Indybay Feature
Publish to Newswire
Add an Event
Related Categories: California | U.S. | Animal Liberation | Media Activism & Independent Media
ACLU tells lawyer Randy Turner that Indybay will not remove article about animal cruelty
by Freedom of Speech
Saturday May 28th, 2011 11:11 AM
An article with photos and videos was posted on Indybay about animal cruelty. The article was about Amanda Lollar of Bat World Sanctuary. She is seen in the video operating on a conscious bat with no anesthesia. She cuts the bat's vagina too much while trying to do an episiotomy and the bat's vagina and uterus are pulled out. Mom and pup died. Lollar is not a veterinarian.

Mary Cummins a wildlife rehabilitator with Animal Advocates filmed the episiotomy gone awry while attending a supposed training internship at Bat World Sanctuary in Mineral Wells, Texas. Cummins thought she would be videotaping the normal birth of a baby bat. While Cummins was at Bat World Sanctuary she witnessed other acts of animal cruelty and neglect besides violations of the health code. She left the internship early, returned home to Los Angeles, California and reported the animal cruelty to authorities.

After Cummins reported Lollar for animal cruelty she was sued for defamation and sharing supposed "copyrighted/proprietary data." Lollar stated in court that the way in which she did the botched episiotomy is "proprietary." Randy Turner of Turner & McKenzie is the Fort Worth, Texas lawyer representing Amanda Lollar and Bat World Sanctuary. Cummins is currently pro se but is looking for pro-bono representation.

Turner filed a motion for temporary injunction against Cummins to force her to remove the videos, photos and articles posted online. Substitute Judge William Brigham sitting in for Judge Bonnie Sudderth allowed the temporary injunction. Turner presented the judge with a temporary order he'd pre-written which included a list of url links on the internet. Most of these linked articles, photos and videos were not posted by Cummins. They were posted by others or robots on websites she does not control.

"Under § 230 of the Communications Decency Act, operators of websites such as Indybay cannot be forced to censor articles and other information that, like the materials here at issue, originate with a third party, even if those materials are defamatory or otherwise objectionable.

Moreover, Indybay has a First Amendment right to display factually accurate materials, including videos and photographs, even if they were acquired unlawfully by a third party. Your demand that Indybay remove the entire webpage, which includes not just the initial post but also links to material supporting and disputing the accuracy of that post as well as information relating to your clients' lawsuit against Ms. Cummins, is clearly overbroad; complying with it would result in the censorship of materials that are clearly protected by the First Amendment, including materials that support Ms. Lollar and Bat World Sanctuary.

In short, whatever the merits of your clients' dispute with Ms. Cummins, Indybay may properly maintain its webpage under § 230 of the First Amendment." (Link to letter from ACLU http://www.aclunc.org/issues/freedom_of_press_and_speech/asset_upload_file985_9987.pdf )

About ACLU of Northern California: The ACLU of Northern California works to preserve and guarantee the protections of the Constitution's Bill of Rights. The largest of the ACLU's 53 affiliates nationwide, the ACLU-NC is located in San Francisco. Today, the ACLU-NC has over 55,000 members, 50 staff, and 16 volunteer-run chapters across the region.
http://www.aclunc.org

About Mary Cummins: Cummins is President of Animal Advocates, a Los Angeles based non-profit animal rescue group. She is also a permitted wildlife rehabilitator specializing in small mammals including bats.
http://www.AnimalAdvocates.us
§Letter from ACLU of Northern California on behalf of Indybay
by Archive Saturday May 28th, 2011 9:49 PM 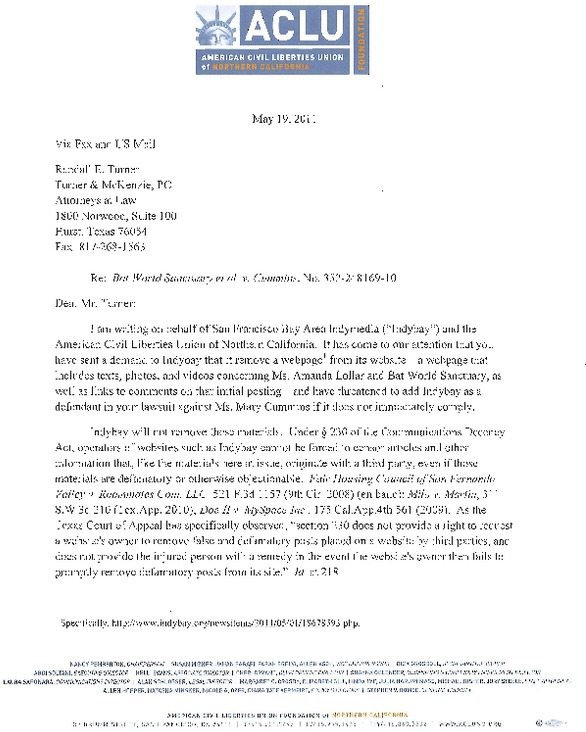 Download PDF (222.1KB)
Add Your Comments
LATEST COMMENTS ABOUT THIS ARTICLE
Listed below are the latest comments about this post.
These comments are submitted anonymously by website visitors.