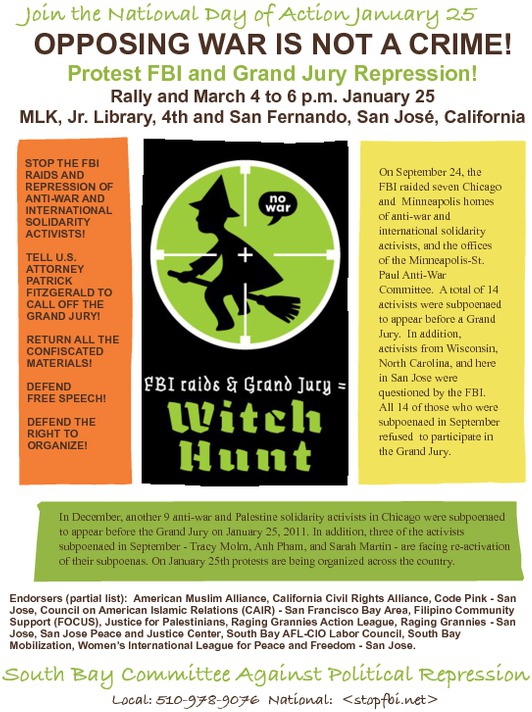 Import event into your personal calendar
Date:
Tuesday, January 25, 2011
Time:
4:00 PM - 6:00 PM
Event Type:
Protest
Organizer/Author:
SB Committee Against Political Repression
Email:
sjpjc [at] sanjosepeace.org
Phone:
510-978-9076
Location Details:
Assemble at
Dr. Martin Luther King, Jr. Library
San Fernando and Fourth Streets
San Jose, CA
On September 24, the FBI raided seven Chicago and Minneapolis homes of anti-war and international solidarity activists, and the offices of the Minneapolis-St. Paul Anti-War Committee. A total of 14 activists were subpoenaed to appear before a Grand Jury. In addition, activists from Wisconsin, North Carolina, and here in San Jose were questioned by the FBI. All 14 of those who were subpoenaed in September refused to participate in the Grand Jury.

In December, another 9 anti-war and Palestine solidarity activists in Chicago were subpoenaed to appear before the Grand Jury on January 25, 2011. In addition, three of the activists subpoenaed in September - Tracy Molm, Anh Pham, and Sarah Martin - are facing re-activation of their subpoenas. On January 25th protests are being organized across the country.

The protest in San Jose will start at the Dr. Martin Luther King, Jr. Library and march through downtown San Jose.

National campaign: http://www.stopfbi.net/
END_OF_DOCUMENT_TOKEN_TO_BE_REPLACED
Added to the calendar on Tue, Jan 11, 2011 5:40PM
Add Your Comments
Support Independent Media
We are 100% volunteer and depend on your participation to sustain our efforts!