Import event into your personal calendar
Date:
Saturday, October 23, 2010
Time:
12:00 PM - 2:00 PM
Event Type:
Protest
Organizer/Author:
Farless Dailey
Location Details:
Frank Ogawa Plaza, 14th & Broadway, Oakland
As the sentencing of Johannes Mehserle approaches, members of the labor and broader community will join together with friends and family of Oscar Grant to take a stand for justice -- and to stand against double standards, police violence, and the senseless destruction of human lives and resources at home and abroad.
Added to the calendar on Sun, Oct 3, 2010 11:33PM
§Flyer for October 23rd Rally
by Richard Tan 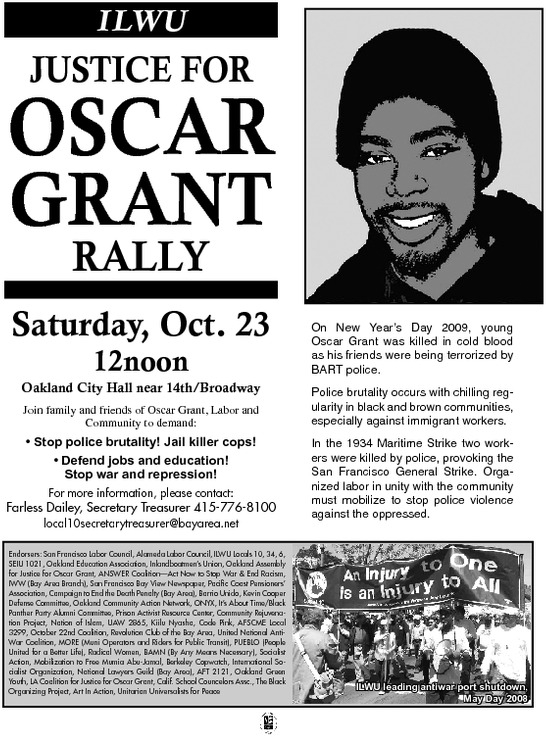 Download PDF (289.1KB)
I've attached the flyer for the rally. An extract from the text:

On New Year’s Day 2009, young Oscar Grant was killed in cold blood as his friends were being terrorized by BART police.

In the 1934 Maritime Strike two workers were killed by police, provoking the San Francisco General Strike. Organized labor in unity with the community must mobilize to stop police violence against the oppressed.
Add Your Comments
Latest Comments
Listed below are the latest comments about this post.
These comments are submitted anonymously by website visitors.
TITLE
AUTHOR
DATE
ILWU members Clarence Thomas and Jack Heyman stress the importance of Saturday's rally!
repost
Support Independent Media
We are 100% volunteer and depend on your participation to sustain our efforts!