Political Prisoner Correspondence and the FBI 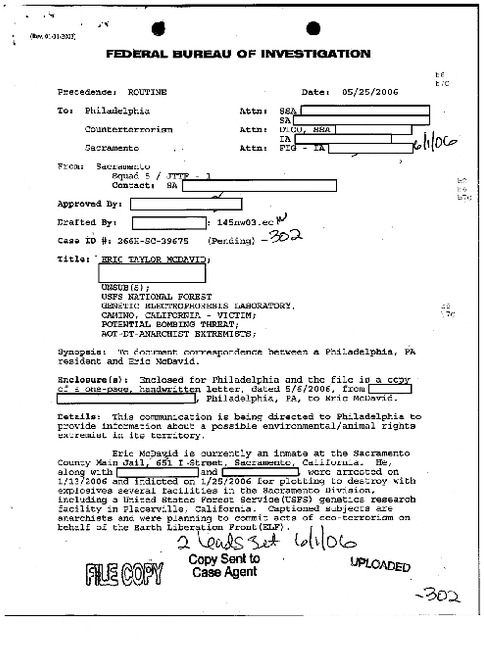 Download PDF (517.9KB)
Recently we began receiving documents in response to a FOIA request we filed with the FBI about Eric McDavid. The documents have uncovered a few alarming pieces of information, but one in particular we felt it necessary to share with the public as soon as possible. For years people have been speculating that writing political prisoners would result in a person being “put on a list.” Unfortunately, it seems that those speculations were not unfounded.

We have received perhaps hundreds of pages documenting Eric's correspondence with other people. These letters are not just kept on file – the Sacramento County Main Jail forwarded all of these letters to the Sacramento FBI field office, which then forwarded them to local field offices around the country (and to law enforcement internationally) to warn the FBI in other cities of a “possible environmental/animal rights extremist” or “a possible anarchist extremist” in their community. Originally, the FBI's communications included a statement that “Sacramento is forwarding this communication for information purposes only.” But later, they began including a much longer statement which read, in part: “this information has been determined to be of such a nature that some follow-up as to the possibility of criminal activity is warranted...” These statements were included no matter what was the content of the letter – often the documents include the statement that the letter was “benign in nature.”

It is unclear whether or not the FBI is still forwarding Eric's correspondence to local field offices. We have not received any documents dated after his move to a federal facility. It is also unknown whether or not all correspondence with political prisoners is treated in the same manner. What we do know is that if a person sent Eric a letter to the Sacramento County Main Jail with their full name and address on it, the local FBI field office more than likely now has that information.

We are not sharing this information to raise alarm or spread fear. We have every intention of continuing to write political prisoners, and we urge others to do the same. That said, we hope to expose the FBI's politically motivated investigations and, unlike the FBI, we believe people have a right to know when they have been spied on. This kind of government intrusion could cause the “chilling effect” so often thrown about in conversations about 1st amendment activities. But when we give in to those fears, political prisoners are the ones who suffer. And this is exactly what the government wants. The state is constantly trying to expand its reach by gathering information about social movements and those who participate in them. Instead of letting this new information scare us into silence, we should use it to make informed decisions about how we support and prioritize political prisoners. This kind of repression has implications for more than just people involved in “activism.” Millions of people are incarcerated in this country. It is possible that the government uses similar tactics to investigate other communities that they actively repress. Writing our friends, family members and comrades should not be a justified excuse for investigation – no matter who our friends are.

We are attaching three documents. The first is typical of the documents the FBI sent towards the beginning of Eric's time at Sac County. The second is an example of what they sent to international law enforcement agencies. The final document is an example of the later version with the language about “follow up” being “warranted.”

If you would like to find out if the FBI has been collecting information on you, here is a website that explains how to request information under the freedom of information act.
http://www.firstamendmentcenter.org/press/information/topic.aspx?topic=how_to_FOIA 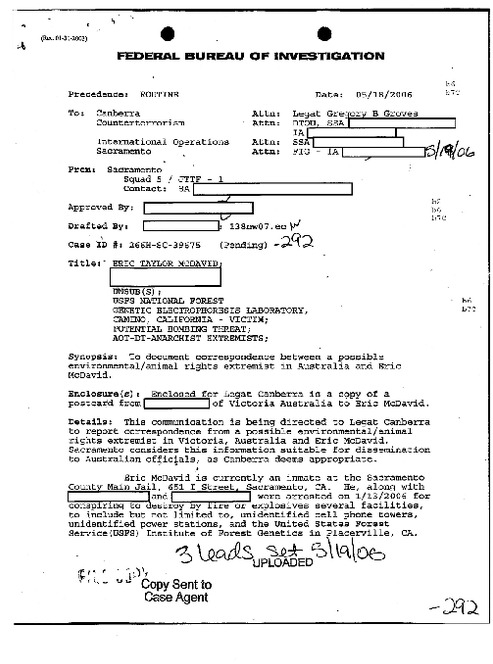 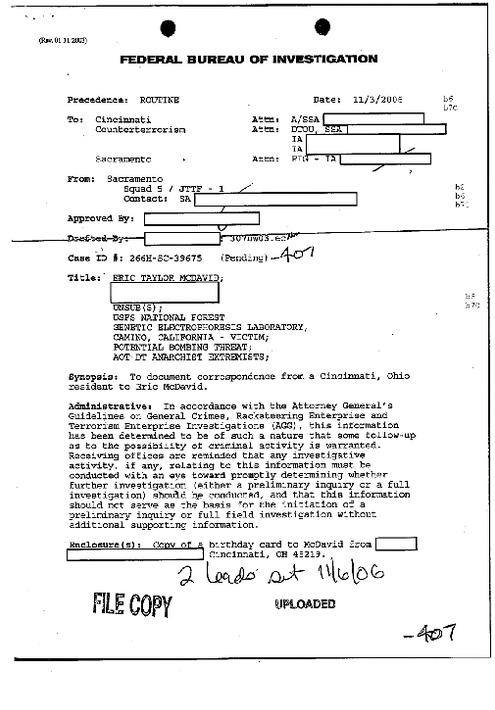 Download PDF (1.2MB)
Add Your Comments
Latest Comments
Listed below are the latest comments about this post.
These comments are submitted anonymously by website visitors.
TITLE
AUTHOR
DATE
The are possible extremists everywhere
Edward Campbell
Support Independent Media
We are 100% volunteer and depend on your participation to sustain our efforts!