Activist Convicted of Marching in Parade

by Red Hill Legal Support (redhill [at] riseup.net)
Court finds with City in Continuing Harassment of DIY Activist
August 16th, Santa Cruz - Anarchists activists and former parade organizer Wes Modes was found guilty this morning of walking in the DIY New Year's parade along with thousands of other participants. Santa Cruz Superior Court Judge Jeff Almquist rejected arguments that the citation was discriminatory and that the city's permit requirements were unconstitutional.

Judge Almquist denied that the law was applied discriminatory, despite defense witnesses at trial who testified that they had also marched in the parade, and even wrote and called the city attorney and council to say they participated in the unpermitted parade and had received no citation.

Almquist also denied a lengthy challenge to the City's permit requirements without addressing all of the points it brought up. According to a constitutional brief filed by Modes' lawyer Jonathan Gettleman after trial, "in order to express one's constitutional rights in a public forum in the City of Santa Cruz, participants must pay high variable fees, obtain a million dollar insurance policy, tell everyone in the vacinity od their intention, obtain a complicated permit, indemnify the City from all liability, and pay the meter fee for everyone who might have parked their car and paid for it along the 'marching' route." Defense argued that this is "an overbroad delegation of authority to government officials to control free speech and assemble," a chilling of free speech, and a constitutional violation.

The decision is the final stage of Wes Modes battle with the City over participation in the Last Night DIY Parade along with thousands of others. A visibly disappointed Modes told a crowd of supporters, "As part of the same system of cops and prisons, was I thinking the courts might offer fairness? I know better than that."

According to parade participants, the parade conviction is the latest in a series of police and city harassment that Modes has received since outing police infiltrators in 2005.

The Last Night Do-It-Yourself New Year's Parade is a Santa Cruz tradition since 2005. Modes helped organize the first DIY Parade which eschewed City permits. Police send undercover officers into community organizing meetings for several months, monitoring organizers and other first amendment activities. The city's own police auditor concluded that police had violated the civil rights of citizens. Under pressure from Modes and the ACLU, the city adapted guidelines on SCPD undercover activities.

The celebration itself became a Santa Cruz tradition. Families line Pacific to watch the parade, which is filled with musicians, puppets, jugglers and unicyclers. The event provided a safe and free way for locals to enjoy downtown on New Year's Eve. Though in 2009, city council member Mike Rotkin and the SCPD have grumbled about organizers not paying for permits, all the event details, including clean up and traffic control, is taken care of by event participants. Said Modes, "The parade is an example of communities coming together to create a diverse and interesting celebration without the help of the city, businesses, or institutions." 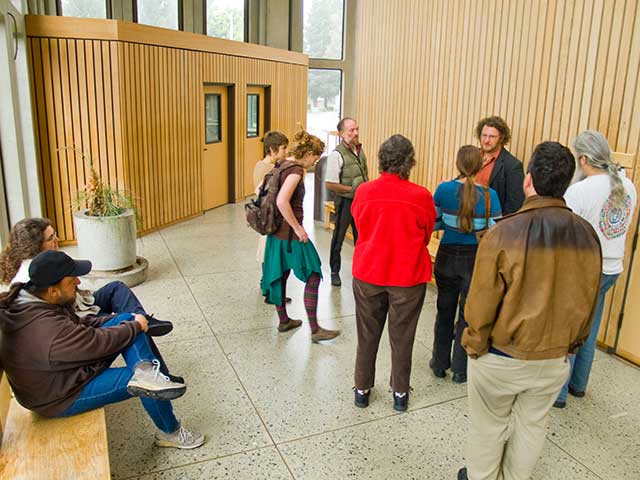 Outside the courtroom, supporters listen as Wes responds to the decision of Judge Jeff Almquist.
§Additional Notes
by Robert Norse
10-15 people attended Modes' Hearing in Judge Almquist's court, some from a considerable distance.

The hearing, though schedule for 8 AM, was apparently trumped by the swearing in of two conservative new judges for Departments 1 and 2 --Gallagher and Connolly--whose ceremonies were scheduled according to the Sentinel for 8:30 AM.

The ceremony was moved up, and the audience for regular judicial proceedings made to wait for half an hour. Almquist held the cremony behind locked doors in Dept. 5, the same court Wes later had his hearing in. After some knocking, the Sentinel photographer finally got in.

City Attorneys Barisone and Barisone (both husband and wife) are at the top of the city's payroll, as well as being city attorneys for Capitola as well. Neither they nor their underlings bothered to appear in Almquist's court, though Wes was ordered to appear. Makes sense--why bother to show up when the Judge is apparently on your side from the getgo?

In the prior trial (see "People v. Wes Modes: Trying to Remove DIY from Santa Cruz" at http://www.indybay.org/newsitems/2010/07/18/18654218.php), Almquist, over defense attorney Gettleman's objection, refused to allow a court recording, a media recording, or a recording for private use.

Almquist repeated the media blackout he'd previously supervised in the "Singing Homeless Songs Downtown a Crime" trial--see "Notes on a Sinister Sidewalk Singing Trial at http://www.indybay.org/newsitems/2010/04/22/18645414.php) by refusing to allow an official (or unofficial) recording to be made. Refusing to allow a court recording or recorder to be present leaves the defense with a more difficult task establishing an appeal record. It also makes accurate media description of the judge's behavior harder.

Almquist rejected Gettleman's afidavit outlining the onerous city procedure for getting a permit as "hearsay", "irrelevant", and "hypothetical" (See http://www.indybay.org/newsitems/2010/08/02/18655182.php?show_comments=1#18655322) for Gettleman's brief against the law).

Almquist rejected the proof that the application costs were onerous on the technicality that the costs were for June/July 2010 instead of December 2009, though I saw no indication the costs had changed.

Almquist insisted that "the only real purpose" of the parade was to march without a permit, which, of course, was ridiculous. The purpose was to have a New Year's celebratory parade which the city could no longer finance. But apparently wanted to move in, control and coopt once it became successful.

Almquist rejected a constitutionality challenge to the ordinance by claiming the law as "content neutral", "narrowly tailored", and "served a substantial government interest--all key requirements for a law to avoid being struck down as violating the First Amendment. However Almquist gave no specifics, apparently simply parroting the City Attorney's response brief (see http://www.indybay.org/uploads/2010/08/10/city_s_response_to_contitutional_brief.pdf). Without providing any specifics, Almquist accepted Barisone's allegation that the law conferred "no unfettered authority on city officials".

Almquist's opinion was also not written, so it could not be more closely examined (nor could his words be later scrutinized for, as mentioned before, he allowed no recording).

Regarding the claim of selective prosecution (that only Wes was cited though many others were likely "guilty" of the "crime" of knowingly walking in a parade without a permit. Almquist denied that Wes was singled out as an individual and part of a protected class--two requirements. He also made the confusing claim that Wes had not found others who were clearly guilty of the crime, but not cited--when in fact, that's just what two witnesses testified to. Some had actually gone to the trouble of contacting the City Attorney to confess.

One important concern was whether this "conviction" would be used to send Wes to jail for violating a sentencing condition in the prior "Drum-de-dum-dum" case (see http://www.indybay.org/newsitems/2008/09/17/18539316.php ).

When asked to finalize and acknowledge, Wes's 500 hours of community service on the prior "drum assault on an officer" charge, Almquist declined to make a statemen. Instead he postponed any discussion of the issue until November 30th. Seemed to me like this is an attempt to maintain an atmosphere of intimidation that will discourage Wes from any kind of public activity that could possibly be considered a violation of any of the city's massive spiderweb tripwire of ordinances restricting the use of public space.

All of this was done in a perfunctory manner with no real dialogue with the defense.

It also appears that Wes doesn't have the resources (and possibly little appetite) for an appeal of any of these outrageous rulings.

Thanks for taking the fight this far to Wes, Gettleman, and his supporters.

My trial and Robert "Blindbear" Facer's for Sinister Sidewalk Singing resumes in September 2nd Dept. 10 at 1:30 PM. Join us to watch more Justice in Action.
Add Your Comments
Latest Comments
Listed below are the latest comments about this post.
These comments are submitted anonymously by website visitors.
TITLE
AUTHOR
DATE
Support Forbidden?
Invest-igate
Ridicules
A
NEVER waste your automatic disqualifier
free da land
Thanks, Robert
there
So what does this mean?
Gretchen
Support Independent Media
We are 100% volunteer and depend on your participation to sustain our efforts!