Add an Event
Newswire
Calendar
Features
Home
Donate
From the Open-Publishing Calendar
From the Open-Publishing Newswire
Indybay Feature
Publish to Newswire
Add an Event
Related Categories: East Bay | Police State & Prisons
BART Police Review Committee on Hiring New Police Chief and New Year's Eve Plans, 11/4/09: audio and PDFs
by dave id
Wednesday Nov 11th, 2009 9:26 AM
Just over a month after NOBLE released the draft report that excoriated BART's entire police department, the BART Police Department Review Committee -- created in the aftermath of the murder of Oscar Grant by BART police officer Johannes Mehserle -- held it's second meeting since the draft was released. On the agenda was the process and criteria for hiring a new police chief to replace the infamously ineffectual and corrupt Gary Gee; BART police visibility on trains; and BART's plans for this coming New Year's Eve. A date for the next meeting was not announced. Of course, there was no word on BART ever holding anyone accountable for the murder of Oscar Grant and the abuse his friends, nor for the cover-up by supervisors afterwards. 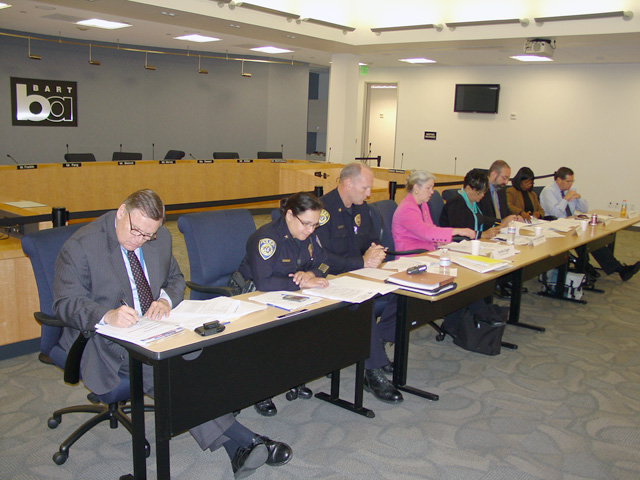 
In order to find a replacement for Chief Gary Gee -- who apparently is on extended paid medical leave doing absolutely nothing to reform his police department while he cruises toward his full retirement by the end of this year -- Bob Murray and Associates have been hired to oversee the process of potentially finding someone more competent and with more integrity to fill the position. Bob Murray handled the recent search for a new police chief for the city of San Francisco, resulting in the hiring of George Gascon of Arizona in June of this year. General Manager Dorothy Dugger set the initial hiring selection criteria (see PDF below). Board member Carole Ward Allen complains that she was not informed or allowed input into narrowing down the hiring consultant to Bob Murray. Dugger and Board member Joel Keller correct her that the Board opted out of being involved in that decision previously.

Board member Tom Radulovich expresses interest in the chief selection criteria and community policing methods. He wants transparency to the public with public input. Keller looks at #2 in the criteria list and wants it to reflect the need for a "culture change" in the BART police department. He wants to know the next chief's background in police training. And he thinks there should be a #13 about addressing the rock bottom morale in the department, as per revelations released in NOBLE's report. Ward Allen asks that communication and media skills be included and is told that #7 and #8 on the existing list cover that. Dugger notes that transit experience is not a prerequisite.

About 26 minutes into the meeting the first bit of public comment was solicited. There is a debate between two attendees about if the next chief should come from within the department or from outside. Skepticism is pointedly raised as to if Dorothy Dugger can be trusted to find a new chief with integrity when she never fired or disciplined her subordinate Gary Gee in any way and is allowing him to slink away now with full benefits. Gee, in turn, has resisted the reform of his police department (as made clear in his public statements and as reported by Ramona Tascoe). Likewise, Gee has refused to fire a single officer for misbehavior related to the murder of Oscar Grant and the police melee of January 1st, 2009.

Radulovich notes the coming "wave of retirements" in the command ranks at the BART police department. These retirements, similar to Gee's, could very well be related to the non-public portion of the Meyer's Nave report that supposedly called out specific BART officers and supervisors for disciplinary action related to their actions on or after January 1st. Additionally, NOBLE's report hinted that problem officers were regularly not only not disciplined but have been promoted up the ranks within the BART police. BART's interim police chief, Commander Travis Gibson, is also apparently retiring in December. Dan Hartwig, who had retired after 25 years on the force, has returned to serve as acting police chief at BART.

NOBLE made abundantly clear that BART officers prefer to drive around in their cars and are rarely found on trains or in stations, hence their the fact that they literally ran to the Fruitvale platorm on New Year's Day 2009 and their apparent lack of people skills in relating in a civilized fashion to BART patrons. Commander Maria White reported on BART PD's minimal efforts to remedy that and have BART police adopt practices often known as community policing, whereby police officers work their beats on foot and make regular non-confrontation contact with the general public. This will mostly happen only in downtown San Francisco (24th to Embarcadero) and in Oakland mostly during daytime hours. White runs through 2008 crime statistics BART police reported: 133 robberies in parking lots or open areas of stations, about 500 auto thefts, almost 1000 burglaries, and she notes that there are on average 43,000 "documented" calls for service per year, or 120 per day, but that "not all of those turn into written reports" by officers. Since the release of the Meyers Nave report which called out BART policy in which only "major" use of force incidents were reported, BART claims that they now require reports for each and every use of force incident. White details more of BART's efforts to increase police visibility during peak hours, including including requiring officers to ride two trains and visit two station once a day. Plainclothes "special problems unit" officers will ride trains at least an hour twice a month. BART police are also in the process of implementing a "daily activity log" to record their efforts at increasing police visibility. These changes have been negotiated with the BART Police Officers' Association. Interacting with customers is now encouraged.

Radulovich notes that having police amongst the public more means that they can acts as the agency's ears for customer comments on bad lighting, etc. Jesse Sekhon, president of the BART Officers' Association, sitting in the public seating, says that officers file beat condition reports already but that there is no follow-up. Joel Keller questions why there are no train-riding officers at the end of the Contra Costa County line.

A discussion amongst committee members occurs about an hour into the meeting regarding police and automatic weapons. Apparently, BART police were regularly patrolling with AR-15s after 911, but stopped carrying them when the agency received too many complaints from the public about the weapons. Tom Radulovich points out that there are obvious issues with police carrying, and potentially using, automatic weapons on a crowded train or station.

Regarding the BART police department's plans for the coming New Year's Eve, Commander/Acting Chief Hartwig says the agency intends to deploy 98 uniformed officers and 25-30 supervisors that night. This year officers will be riding trains and supervisors will be in the field. Hartwig says they will follow Meyers nave's recommendations. He is well aware that the culture needs changing and wants families to feel safe about BART police. Keller asks about strategies to deal with officer fatigue and is told that there is a focus on proper hydration and carrying Cliff bars, with rest prior to peak traffic on New Year's. The police intent is to heavily staff up from 4pm on 12/31/09 through 4-6am on 1/1/10.

Paul Oversier, Assistant General Manager of Operations, says there will be supplemental "event trains" in addition to regular trains -- timed with fireworks in San Francisco, a "surge" of trains will be in use downtown at the correct time. In the past there have been train operator issues with not enough to get everyone out of downtown SF sufficiently after fireworks. He is trying to get more operators to agree to work New Year's Eve because overcrowding causes tension. BART will likely close some entrances at Embarcadero station to spread crowd out and might close the station to force people to walk to Montgomery station. The Embarcadero station represents half of all people entering the system after midnight (see PDF below for total numbers from past years).

Dugger says that the last train for the night will be deployed at 3am, the same as last year. She also says that she is looking for opportunities with Oakland for a community event and that she intends to communicate with the Grant and Johnson families on anniversary commemorations to mark the death of Oscar Grant last january 1st. She says BART offered the Fruitvale station for the family to use after Oscar Grant's death. Ward Allen proposes keeping a coffee shop at Fruitvale station open late and giving coupons for coffee in BART. Other strategies are being considered to break up crowds with food and coffee etc, including table ticket sales for round trip New Year's Eve tickets at originating stations.

The next meeting of the Police Review Committee, as yet unscheduled, will follow-up with the police chief selection criteria and plans for New Year's Eve. No word on when the final NOBLE report will be released nor exactly what was discussed in the previous meeting on October 5th, although it was promised that creating action plans for achieving NOBLE recommendations would be examined when the draft was released. 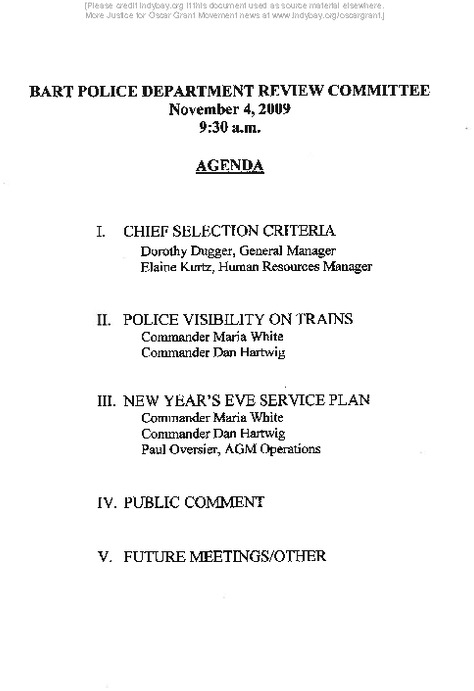 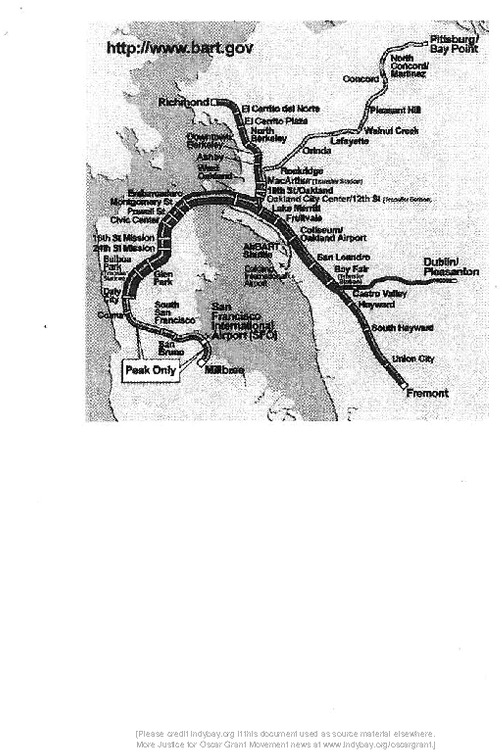 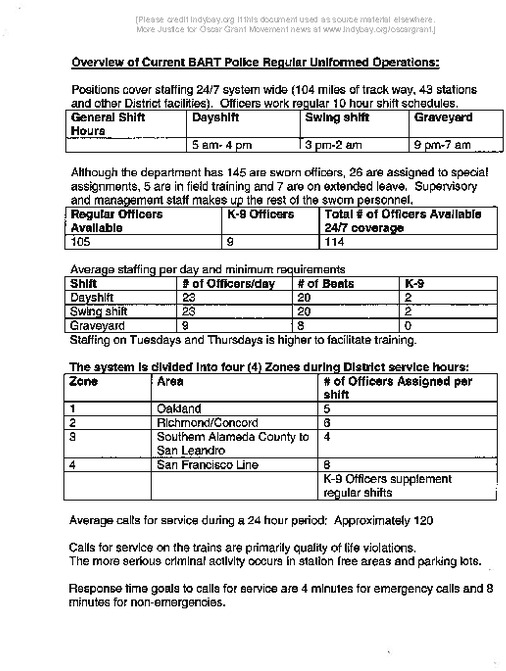 Seven officers are on extended leave. We know that includes Marysol Domenici and Tony Pirone, but not January 1st Fruitvale officers Noel Flores, Jonathan Guerra, Emery Knudtson, and Jon Woffinden who have been reinstated (http://www.indybay.org/newsitems/2009/09/15/18622112.php). Are any of the remaining five on extended leave as a result of their actions related to the murder of Oscar Grant and the abuse of his friends? It is not clear if supervisory staff are included in the extended leave figure, although Chief Gee has been reported to be on extended medical leave as he approaches his retirement.
http://indybay.org/oscargrant
§Selection Criteria for Hiring Search Firm for BART Police Chief
by dave id Wednesday Nov 11th, 2009 9:27 AM 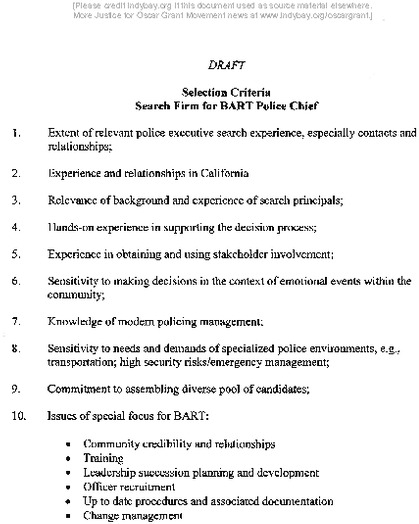 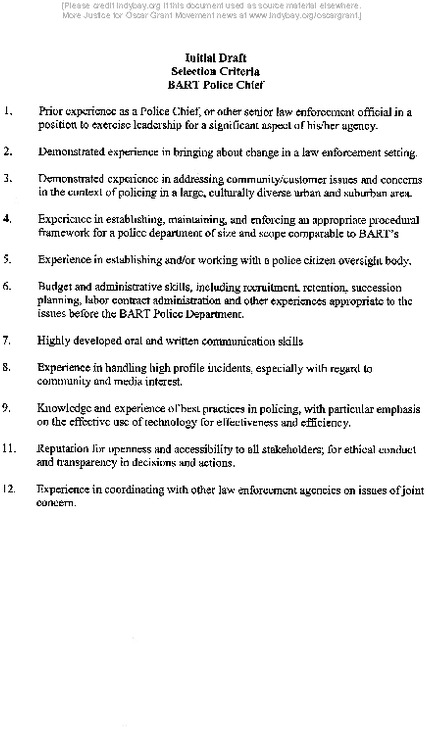 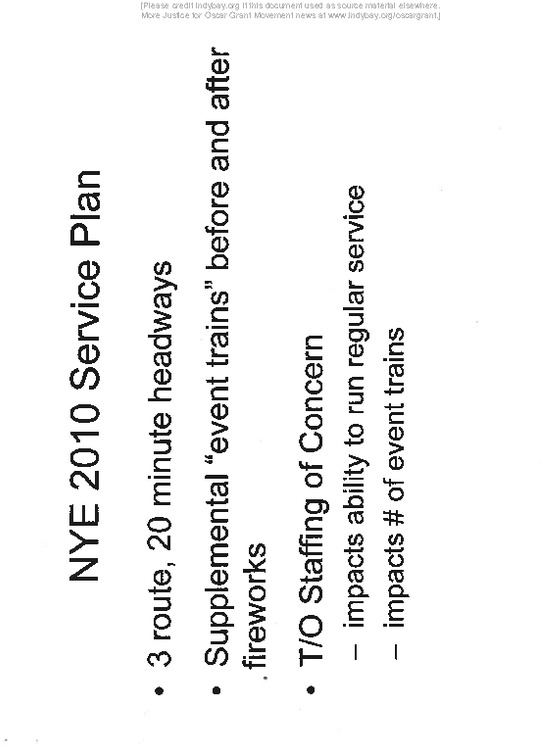 Includes numbers of riders who entered BART system after midnight in the early hours of last New Year's Day.
http://indybay.org/oscargrant
Add Your Comments
Support Independent Media
We are 100% volunteer and depend on your participation to sustain our efforts!