Add an Event
Newswire
Calendar
Features
Home
Donate
From the Open-Publishing Calendar
From the Open-Publishing Newswire
Indybay Feature
Publish to Newswire
Add an Event
Related Categories: Santa Cruz Indymedia | Health, Housing & Public Services
Taking a Pledge in Support of the Homeless Community in Santa Cruz
by ~Bradley (bradley [at] riseup.net)
Friday Jul 3rd, 2009 7:43 PM
On July 3rd, a busy pre-holiday afternoon in downtown Santa Cruz, numerous stores were displaying a declaration printed by local homeless rights advocates. The pledge reads, "This business does not discriminate. We support Human Rights for the homeless community, including the right to sleep at night--not anywhere and everywhere--but somewhere."

Since around mid-June, homeless rights advocates, including HUFF (Homeless United for Friendship & Freedom), have been approaching local businesses and asking them to support human rights for the homeless by displaying the pledge either outside or inside their store. It is possible that some stores could see the pledge as little more than a cheap marketing opportunity or perhaps as something as simple and socially-accepted as a peace-sign. However, the stores are taking a stand against backers of a Santa Cruz Municipal Code known as the "homeless sleeping ban." The influential backers of the sleeping ban include City of Santa Cruz bureaucrats, the Santa Cruz Police Department and the Downtown Association of Santa Cruz, which claims to represent hundreds of Santa Cruz businesses.

The sleeping ban prohibits the act of sleeping between 11pm and 8:30am anywhere outdoors or in a vehicle on both public and private property within the city limits. Homeless rights activists are dedicated to ending this ban and finding what they say are real solutions, such as "Safe Sleeping Zones" for vehicles and campers. 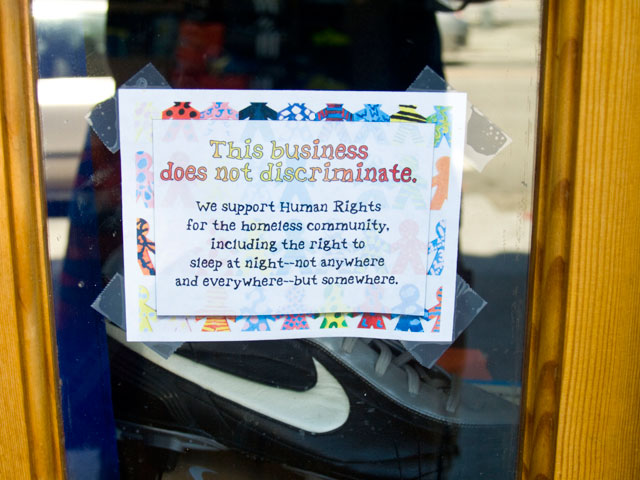 Many articles have recently been published to Santa Cruz Indymedia that are related to the pledge in support of the homeless community in Santa Cruz. For your reference, those articles include:

Various business have been listed as taking this pledge in support of the homeless community. While I saw the pledge displayed at most businesses that have been listed, there were some listed business where I could not see the pledge displayed. Specifically, I looked and did not see the pledge at Streetlight Records, Starbucks and El Pollo Loco. I saw the pledge at Taqueria Vallarta, Santa Cruz City Soccer, Perfumer's Apprentice, More Music, Vasili's Greek Restaurant, Bad Ass Coffee, the thrift store on Front St, as well as Camouflage, which I happened to notice though I was not specifically looking, since I did not see it listed.

I have taken these photographs and listed the stores for your information. 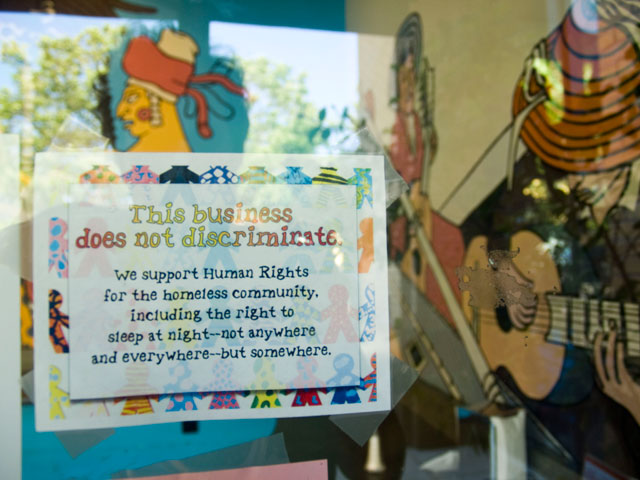 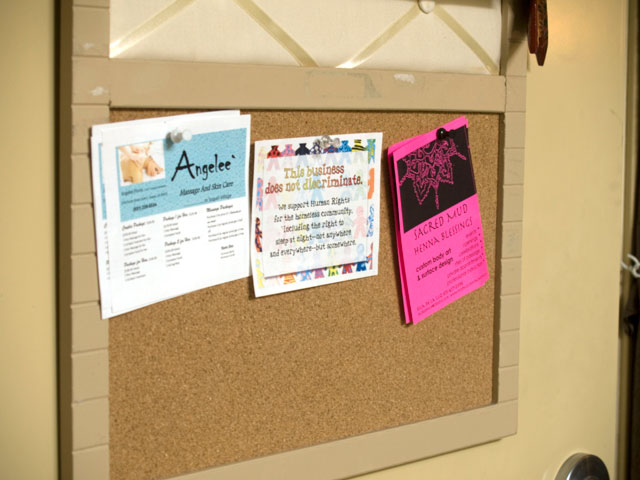 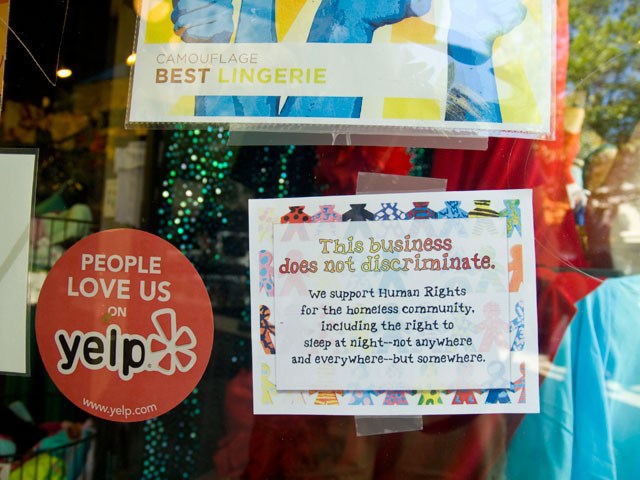 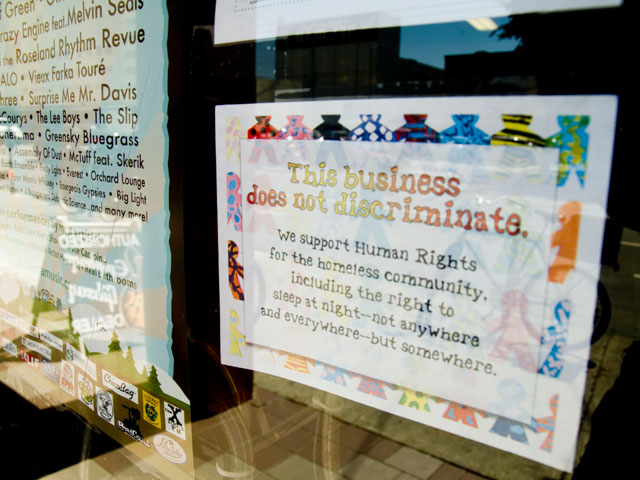 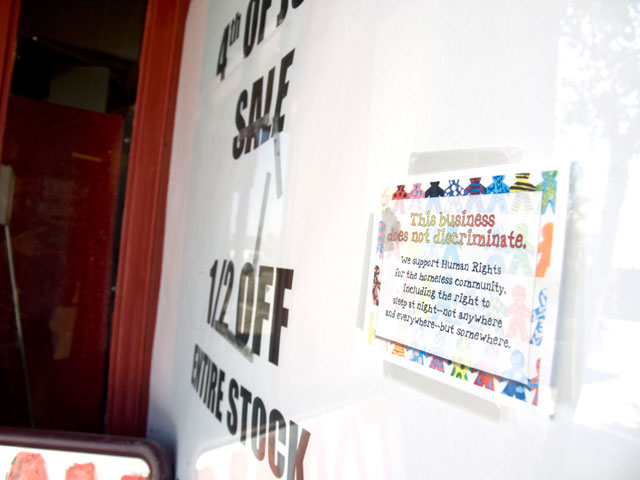 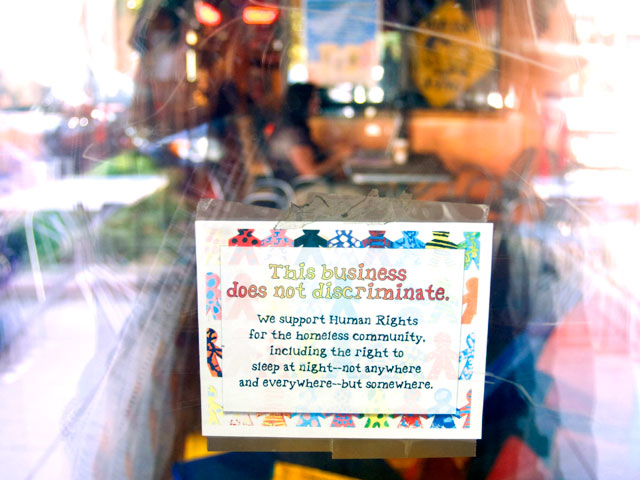 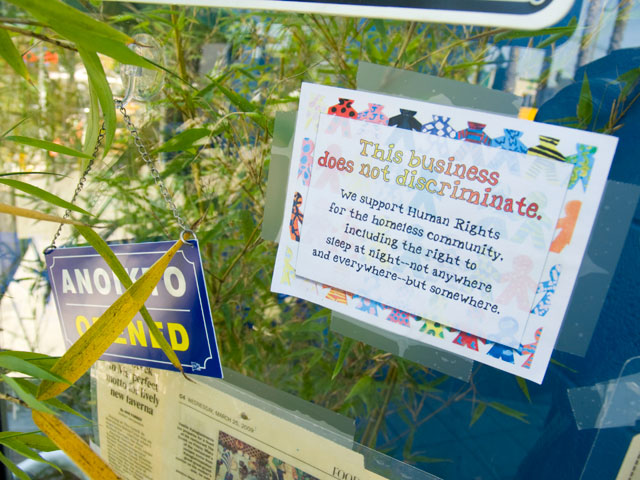 Vasili's Greek Restaurant
Add Your Comments
LATEST COMMENTS ABOUT THIS ARTICLE
Listed below are the latest comments about this post.
These comments are submitted anonymously by website visitors.