Add an Event
Newswire
Calendar
Features
Home
Donate
From the Open-Publishing Calendar
From the Open-Publishing Newswire
Indybay Feature
Publish to Newswire
Add an Event
Related Categories: East Bay | Police State & Prisons
Rashidah Grinage, Oakland Citizen's Police Review Board, 4/23/09: pdfs, photo, and audio
by dave id
Thursday Apr 23rd, 2009 11:13 PM
On March 23rd, the Oakland Citizen's Police Review Board (CPRB) held its monthly public meeting in Council's Chamber at City Hall. Sadly, besides the Board members and investigators themselves, in attendance were only a CPRB intern, one complainant, his legal representative, Sanjiv Handa of the East Bay News Service, Rashidah Grinage of PUEBLO, and yours truly.

Importantly, though, Rashidah Grinage discussed the proposal she has worked on with Mayor Ron Dellums' Task Force on Police Issues for the Civilianization of Internal Affairs. She will present the proposal to the Oakland City Council's Public Safety Committee at their hearing next Tuesday, April 28th at 5:30pm in Hearing Room #1 at City Hall. She asked the CPRB to attend and offer support. Additionally, she concludes her talk with a plea for community support to turn out, pressure the City Council, and help make it happen.

The proposal for "civilianization" of OPD Internal Affairs involves all citizen complaints against OPD going to the CPRB, whereas now only about 10% do; CPRB hiring ten new civilian investigators for itself, which would free up ten OPD officers from Internal Affairs to be reassigned and actually do criminal investigations which have been historically understaffed; while the new Internal Affairs department would only investigate officer-initiated complaints, police work accidents, and so forth. The new CPRB would be more like San Francisco's Office of Citizen Complaints. Unfortunately, the Oakland police have raised objections to the proposal recently after having initially supported the idea, and police have been granted their own separate agenda item next Tuesday to voice their objections to the proposal at the Public Safety hearing.

Rashidah Grinage also mentioned a long-range proposal of creating a new Police Commission in 2010, but that would take a citywide vote as it would require an update to the City Charter.

Audio from the CPRB meeting here starts with Sanjiv Handa reporting on City of Oakland business, and then there are reports from Board members on pending cases before the Board and a youth outreach event at Laney College on April 30th before Rashidah speaks about 6 minutes and 30 seconds into the meeting:
Listen now:
Copy the code below to embed this audio into a web page:
Download Audio (9.7MB) | Embed Audio
(audio 28:14)

After Rashidah Grinage spoke, the CPRB went into closed session to discuss two specific complaints against officers in the Oakland Police Department. Such hearings are closed to the public as per the Copley ruling and the California Police Bill of Rights. 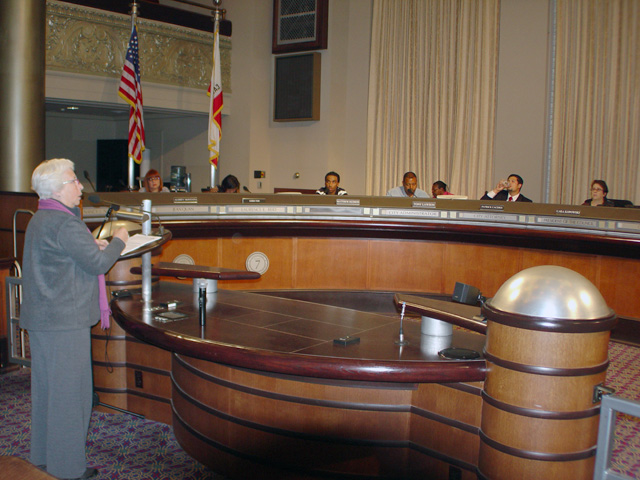 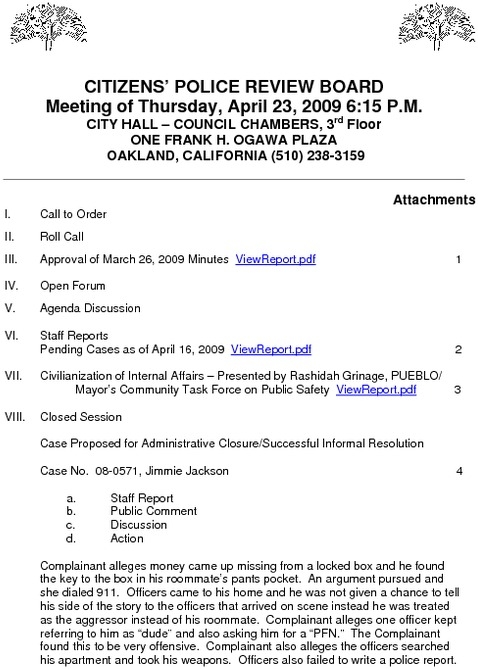 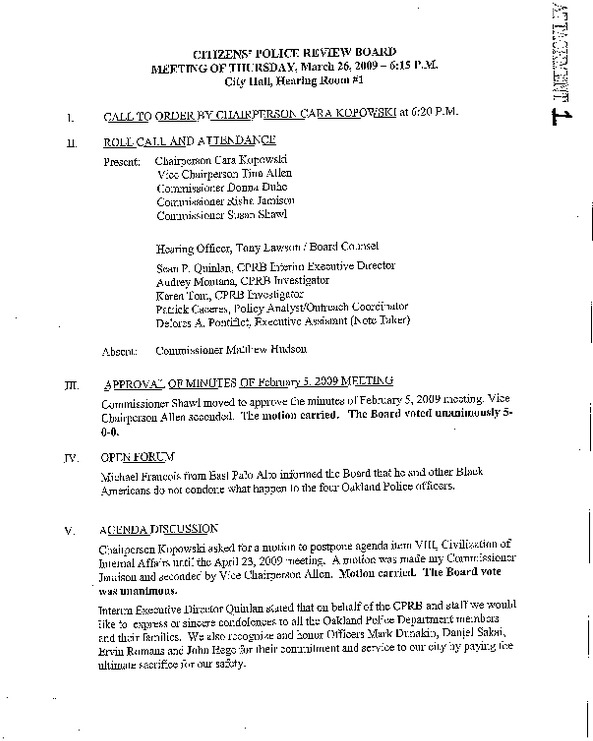 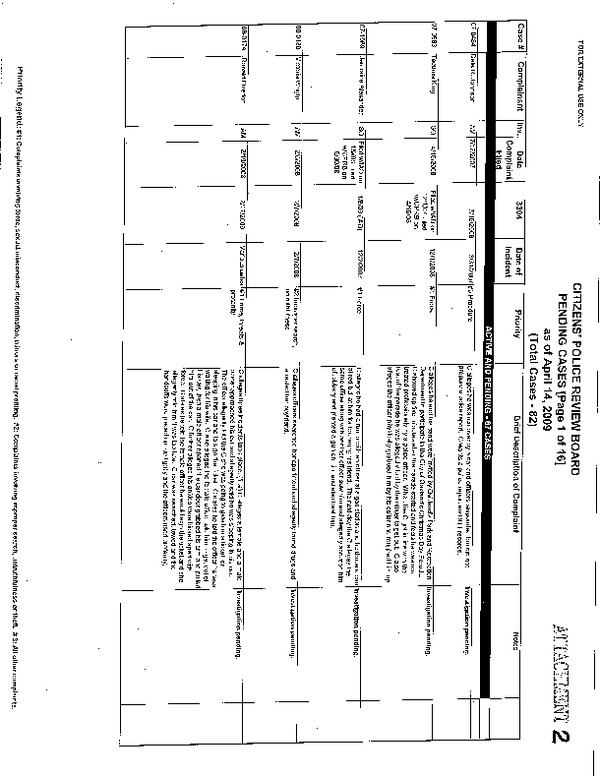 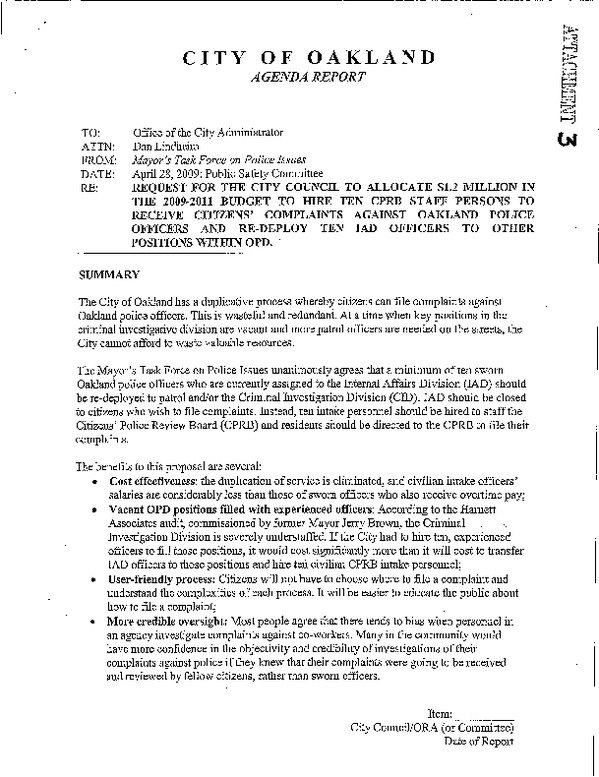 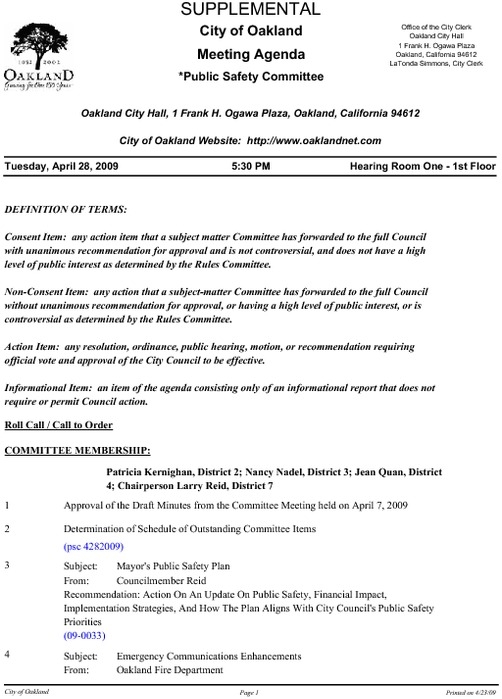 Download PDF (160.8KB)
You can fill out a speaker's card online to reserve time to support the civilianization program: http://www.oaklandnet.com/cityclerk/speaker_instructions.cfm. Rashidah Grinage says the proposal, item #6 on the agenda, likely will not come up until almost 6:30pm. 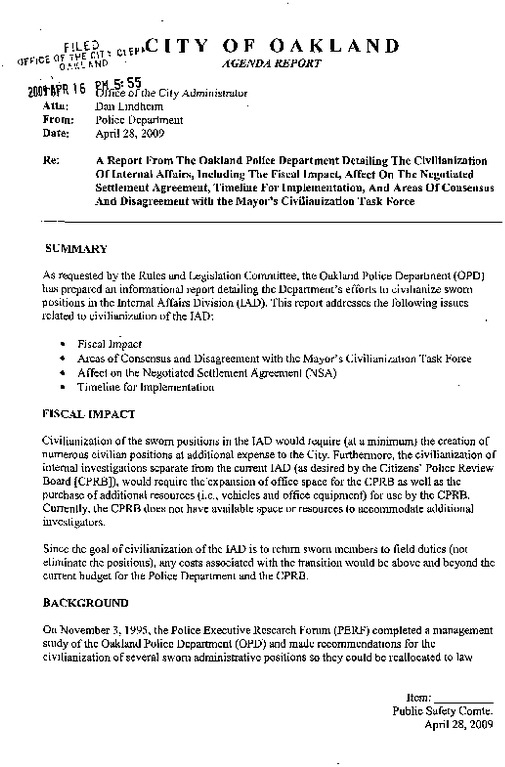 Download PDF (249.6KB)
More or less, after working with the CPRB and Pueblo in the Mayor's Task Force on Police Issues, IA has done an about-face and now objects to virtually the entire proposal. IA suggests that any civilian investigators hired work under OPD supervision, which completely defeats the purpose of having independent investigators.
Add Your Comments
Support Independent Media
We are 100% volunteer and depend on your participation to sustain our efforts!