by Dr. Lilly von Marcab
Germany’s Department of Interior Affairs this week convened a three hour seminar on Scientology.  The meeting, called "This is Scientology! Reports from the USA," was held in Hamburg. Unlike the situation in the United States, where it has "religion" status, Scientology in Germany is considered to be a "Threat to Democracy," ranked right alongside "Islamic extremism" and "Racist skinheads." 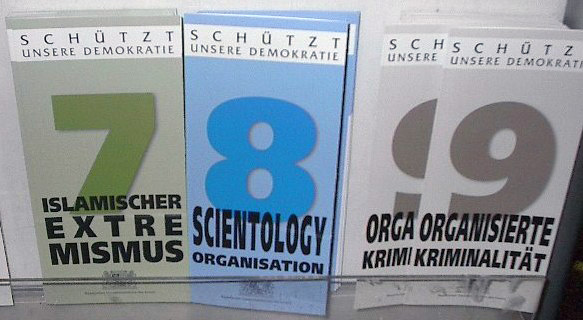 The program was organized by Ursula Caberta, who heads the Scientology Task Force of the Hamburg Interior Authority. Caberta invited a number of prominent American Scientology critics to the forum, including Hollywood actor Jason Beghe, who recently left the cult after 14 years; Marc Headley, who defected a couple of years ago, and who used to work closely with cult leader David Miscavige; Larry Brennan, a former high-ranking Scientologist who has personal knowledge of the process of "religious cloaking" done by the Scientology cult, for the express purpose of obtaining tax-exempt "religion" status; and Graham Berry, a heroic attorney who has fought the cult for more than 20 years. Also in attendance were several Anonymous members from the USA, as well as from German and other European countries; dignitaries from other countries; and, importantly, a representative from the US Consulate in Hamburg.

Scientology's main offices in Hollywood and Clearwater dispatched a delegation of their most vicious lawyers and PR guys. Notably, these included Tommy Davis, who was seen flipping out with rage as he bull-baited BBC reporter John Sweeney in the 2007 program "Scientology and Me"; and attorney Kendrick Moxon, one of the most vile human beings alive.

I am going to quote at length the reports from several people who were there, as they eloquently describe the meeting and the events leading up to it. I will annotate where needed in [brackets].


MARC HEADLEY:
The event came off flawlessly and the presence from Anonymous was impressive. All of us did several TV interviews and got the word out to as many stations both in EU and US in the time that we had. The government officials that we were able to talk to one on one were amazing and Europe is going to see a huge surge of activity regarding investigating Scientology across the boards. The US delegation of Scilons [Scientologists] that traveled to Germany was dealt a bonanza of epic fail. Not only were they not allowed to disrupt the meeting in any way, because they came so late and did nothing to get on the guest list until the day before, they were denied access to the meeting and not allowed to even come to the podium. There were only enough seats up front for who was scheduled to speak.They were busy little bees behind the scenes though. OSA did not plan on us having multiple secret service personnel with us at all times. Seems they did not do much homework or planning for this wasted trip over here. Note to OSA: tell your boys that when they get back to LA, we can meet up for coffee in Santa Monica. Yeah, that’s right, we did our own little homework and know where your boys live - bitches. Next time tell them if they are going to get so close, don’t let their baggage tags with their names on them show so clearly! Also, the blonde PI dude needs to spend some of his hard earned scilon cash for some new luggage. You can’t be an international PI running around with a friggin’ school kid’s back pack from Kmart. I do not think that OSA knew they were going to have police escorts while here either. They had their own police full time (for their protection) that were talking to our police and so forth. It was like playing spy vs. spy, except for OSA did not have any spies. Moxon did manage to show up for a few minutes when we were on a small break and Jason Beghe bitch slapped his ass all over the place. Moxon could do nothing but walk away with his tiny junk up his trunk.
ANONYMOUS
We met up at the main station, Scilons were already there with cameras and cell phones, trying to intimidate us. Irishfags were there, Londonfags were there and a lot of fags from all over Germany. [The suffix "-fags" is the current slang, neutral in tone, for "person from..." or "person who is/does..." etc.]. We used the subway and were followed by OSA in the coach behind us, we went further by foot to the event ... Police met up with us and warned us to keep our flyers and flags down because we could be sued. They ensured us police would be on our side, and we should not give the scilons any possibility to hit us. We went further and saw that a whole bunch of scilons were there, a lot of high ranking German scilons, some we already met at the protests, some we met the CCHR [Scientology's main anti-psychiatry front group] exhibits, also Sabine Weber [head of Scientology in Germany], and the international Scilon elite like Moxon....

The first thing we heard was that the Scilons tried to stop the event until the last hour, and when this didn't work out, they tried to get Tommy Davis in... which failed miserably. Quote "If you discuss the dangers of illegal drugs, you do not invite the drug dealer to speak on stage." Then there were good speeches, and Anonymous had a professional camera team there from the Netherlands ... so expect the speeches in good quality on the tubes soon... These speeches were just EPIC. Lots of European government officials were there, local newspapers and the national tv. So it was WIN.


ANONYMOUS
Inside we found Sabine (apparently the top Scifag in Germany) on her mobile phone looking like someone had eaten her cat. Also present was Toxon himself who looked like someone had shat in his cornflakes.A procession of masked Anons then made their way to the event to be confronted outside by the Scifag [Scientologist] protest. They looked dour, to say the least, and never made any noise. Our protests are definitely much more fun. They did take the brave step of getting two six-year-old-looking kids to give us black PR. Was very humourous when one tried to bullbait myself and one of the Britfags [Britons]. That didn't work too well given that we hadn't a word of German between us and didn't know what he was saying.

ANONYMOUS
The Scientologists in the morning of the event were outside with their police registered event (This is normal under German law). They had their, made by the local printer, signboards which were by some of them also a refuge, all you could see behind the signs was the lower part of the body. There were about ten demonstrators, and half in their 50 - 60's. I didn't recognize anyone only Sabine Weber. They started again in the afternoon and before the event. There flyer was the usual mixture of information and disinformation which reinforced the presence to the public, that no one really knows if Scientology is a scam or not, including the OSA. One mistake they made was to represent a swastika on their flyer. This is strongly forbidden here in Germany, I wonder why the police didn't notice and confiscate it?

Mrs Caberta had invited a Scientology representative to present their point of view, but nobody turned up. Everyone was filtered before entering the hall and there were subsequently only guests that had a genuine interest that came in. At the back of the room were perhaps 8 translators in their individual cubicles, with enough translations receivers for everybody.

Larry Brenner started everything off with a good speaker presence, and lots of examples. i.e."That Hubbard over the two year period of the "Religious Cloaking" gave the orders personally, the whole time, instructing the new religious use of Scientology". The impression from all the speakers was what they had to say, didn't include the normal Scientology misinformation, their information originated from personal experience, and elaborated all the Scientology mysteries that occur when one mixes opinion and fact together. To me it all seemed credible, it explained a feasible reality, a genuine attempt to distinguish fact from fiction. Each speaker spoke from their personal and factual experience. They had really no motive, to lie or exaggerate or make a religious attack. Here was a audience, a need to inform oneself, of what Scientology really is, and how or if it fits into the German democracy. The last speaker, lawyer Graham Berry really closed many of the legal ambiguities....

The next day, and in the days to follow, Anonymous conducted raids (our word for protests) on Scientology offices in Hamburg and in cities all over the world. Won't you join us for the next big raid, on Saturday, 13 September, 11 am local time, in cities everywhere?

END_OF_DOCUMENT_TOKEN_TO_BE_REPLACED
§Anonymous arrives on the scene in Hamburg
by Dr. Lilly von Marcab 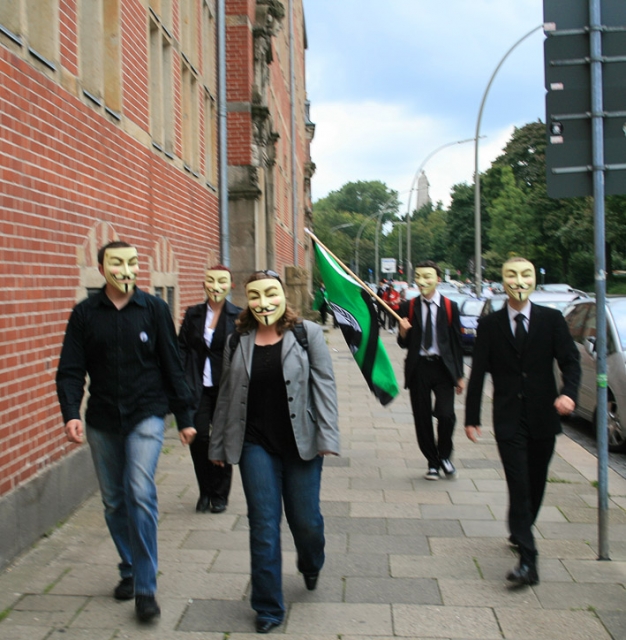 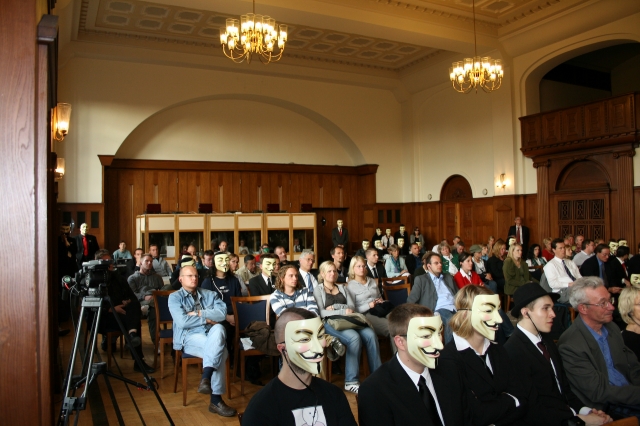 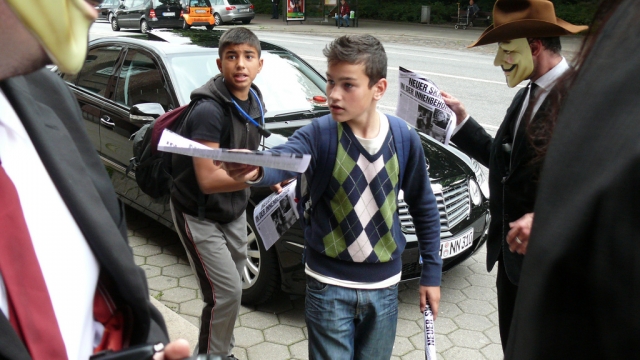 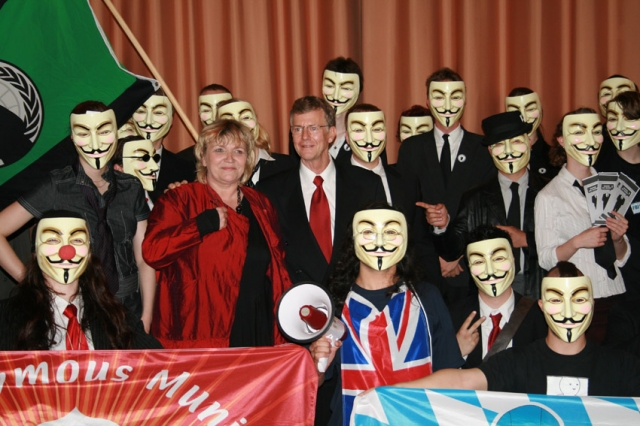 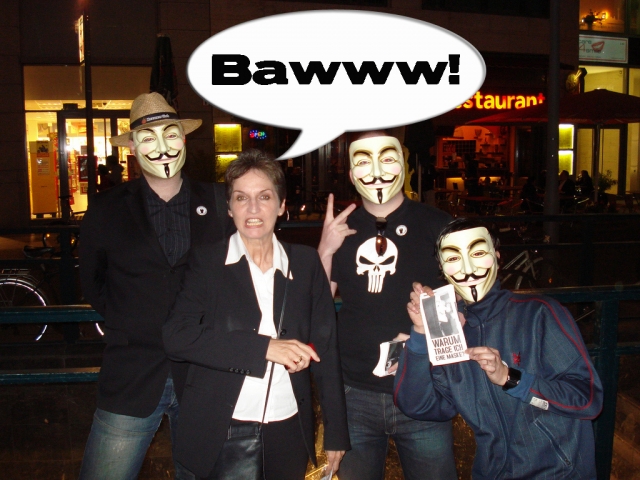 original image (1024x768)
Anonymous, with Sabine Weber, head of Scientology in Germany Poor Sabine doesn't look very happy. Maybe she should leave the cult.
END_OF_DOCUMENT_TOKEN_TO_BE_REPLACED
Add Your Comments
Latest Comments
Listed below are the latest comments about this post.
These comments are submitted anonymously by website visitors.
TITLE
AUTHOR
DATE
Great Event, Great Article, Great Pics!
Mary McConnell
Looks like you can almost stick a fork in Scientology
ANONYMOUS
WHAT IS THE SECRET THAT THE “ANTI-GOD CULT” CALLED “SCIENTOLOGY” FEARS THE MOST?
RONBOTHUNTER
to nonanonymist
tengah tengah
"Tinky Winky" (Scientologist): BAAWWWWWW
Anonomalous
lolwut?
Tinky Winky
Moxon (left) retreats in disgrace
Dr. Lilly von Marcab
Support Independent Media
We are 100% volunteer and depend on your participation to sustain our efforts!