DOWNLOAD THE REPORT AS A PDF BY CLICKING ON THE IMAGE BELOW: 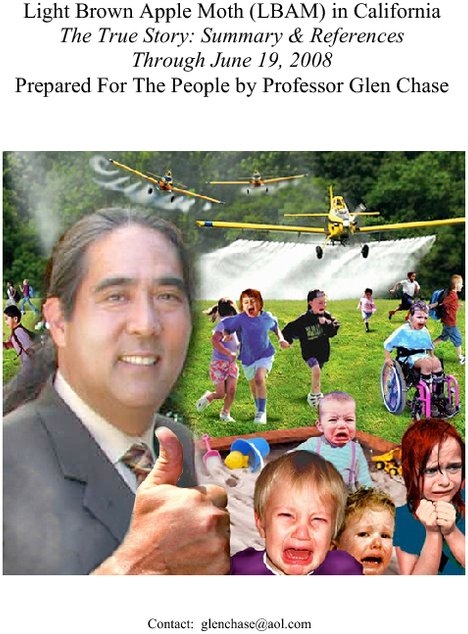 Glen Chase, a Professor of Systems Management, has released a second report identifying the CDFA LBAM eradication program as a fraud.

Professor Chase's first report revealed the falsehoods the CDFA delivered after June 19 when courts and public pressure stopped the CDFA from aerial spraying synthetic pheromone based pesticides directly on cities. This second report reveals the fraud and misinformation delivered by the CDFA from the fall of 2007 until June 19, 2008.

"CDFA has demonstrated that they will lie, cheat and even sacrifice the lives of California's children in order to steal $100's of millions of emergency funds, set aside for real emergencies."

"We are now into the third year after noticing the Light Brown Apple Moth in California and recognizing that LBAM has been living here about 30-50 years or more, while doing NO DAMAGE. The CDFA is getting more and more desperate to quickly implement fake emergency eradication methods, so they can access the emergency funds and pretend they are saving California by stopping the LBAM from doing damage. For emergency funding, it seems the CDFA would claim to save us from Lady Bugs, if we didn't know better."

The only real emergency is the CDFA. The CDFA is planning to expose children and adults to toxins by many methods and interfere with natural balances in nature in order that programs are ongoing that appear to be a legitimate eradication. CDFA is also threatening the existence of small farmers and nursery businesses by imposing quarantines on their products, without assisting them financially.

In July, Professor Chase called for an independent State investigation of the CDFA program asking that charges be brought against those who are guilty of violating the public trust and guilty of child endangerment by endangering children's lives with toxins applied directly onto their bodies and into the air they must breath. "As more and more people and elected officials are learning the truth about LBAM and the CDFA, the likelihood grows that the participants in this eradication fraud at CDFA will pay for their crimes."

The cover, alone, of Professor Chase's report is well worth the download. The entire report is a quick read, and it offers the most relevant references and videos within each subject area for those who are interested in a deeper look into the world of LBAM and CDFA fraud.


Glen Chase is a Professor of Systems Management specializing in Environmental Economics and Statistics. Glen served as an Associate Professor teaching graduate level courses in Systems Management at USC for eight years. He has taught at multiple universities in the Central Coast area, including The Naval Post Graduate School, The Monterey Institute of International Studies and Cal State University, Monterey Bay. Glen is also a Management Consultant. Currently, Professor Chase develops management systems to assist organizations that cater to the improvement of life for children with disabilities.

Background Note: the area of Systems Management within Chase's field involves management, communication and integration of complex and often highly specialized sciences. Systems Management was not generally recognized 100 years ago, when a single scientist could be a master of all areas related to his/her work. Today, it is essential.

CDFA LBAM Eradication Program reported to be a Fraud  (July 15th, 2008)
http://www.indybay.org/newsitems/2008/07/15/18516449.php
Add Your Comments
LATEST COMMENTS ABOUT THIS ARTICLE
Listed below are the latest comments about this post.
These comments are submitted anonymously by website visitors.