Add an Event
Newswire
Calendar
Features
Home
Donate
From the Open-Publishing Calendar
From the Open-Publishing Newswire
Indybay Feature
Publish to Newswire
Add an Event
Related Categories: California | Santa Cruz Indymedia | Environment & Forest Defense | Government & Elections | Health, Housing & Public Services
CDFA LBAM Eradication Program reported to be a Fraud  
by Report by Professor Glen Chase
Tuesday Jul 15th, 2008 2:08 PM
Glen Chase, a Professor of Systems Management, has released a report identifying the CDFA LBAM eradication program as a fraud. "CDFA claims the moth is an emergency and pretends that they can eradicate it in order to steal $100's of millions from taxpayer emergency funds, set aside for real emergencies." 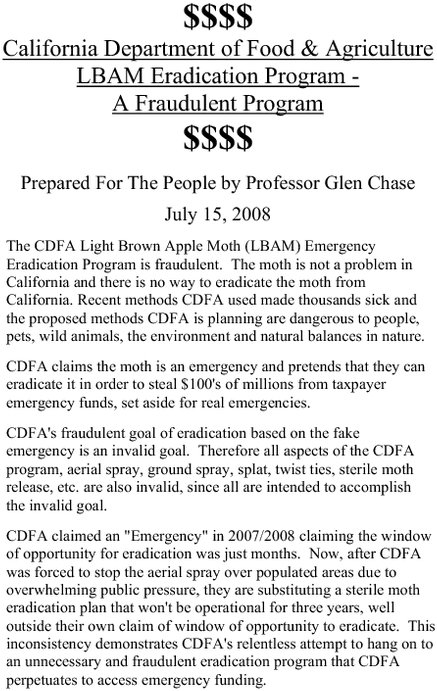 Glen Chase, a Professor of Systems Management, has released a report identifying the CDFA LBAM eradication program as a fraud. "CDFA claims the moth is an emergency and pretends that they can eradicate it in order to steal $100's of millions from taxpayer emergency funds, set aside for real emergencies."

"CDFA's fraudulent goal of eradication is based on a fake emergency, which was confirmed invalid by The Monterey and Santa Cruz County Superior Courts when both ruled that the CDFA violated California's Environmental Law by claiming an emergency exemption and spraying pesticides on populated areas." Both courts also found that no damage from this moth had occurred, contrary to CDFA's claim.

After the court rulings and after 31 cities passed resolutions to stop the spray of pesticides from this program, the CDFA gave up the aerial spray of synthetic pheromone based pesticides directly on cities. CDFA claimed it was the only method to eradicate the moth within the window of opportunity of only months that existed for eradication.

Now the CDFA reports they will instead use an untested sterile moth release program that won't be fully operational for three years, in 2011. "How the window of opportunity to eradicate the moth magically jumped from just months to years is a story that the CDFA is still working on."

"The CDFA continues to use the fear tactic of potential damage, so they falsely advertise that the moth is a recent arrival to California. The CDFA had the moth confirmed as a Light Brown Apple Moth in February 2007 and CDFA uses that date to imply that the moth arrived then. Actually, the moth was first noticed in California in June 2006 in the back yard of Jerry Powell, a retired UC entomologist in Berkeley. The widespread population of the moth in California and the specific population densities of the moth when analyzed with real science and statistics dictates that the moth has been in California for at least 30-50 years. Zero damage and LBAM being here many years pulls the rug out on CDFA's claim that LBAM is a serious threat. It also reveals the unnecessary and fraudulent eradication program. However, CDFA continues to falsely associate February 2007 with the arrival date. Recently, at the July 8 Sonoma County Board of Supervisors meeting, CDFA, in desperation, claimed that modern truck transportation is responsible for the wide spread location and population densities of the moth."

If 100,000 LBAM would create a certain amount of damage, then 5,000 LBAM would generate 5% of that damage. Tens of thousands of LBAM have been trapped in California indicating that tens of thousands or hundreds of thousands or more exist in California. Zero damage has occurred from these numbers of LBAM. If and when the LBAM population grows to five or ten or 1,000 times what it is today, the damage will then be zero multiplied by the increase in LBAM. And zero times any number is still zero. Therefore, no potential damage exists from LBAM."

Chase says: "CDFA's fraudulent goal of eradication based on the fake emergency is an invalid goal. Therefore all aspects of the CDFA program, aerial spray, ground spray, splat, twist ties, sterile moth release, etc. are also invalid, since all are intended to accomplish the invalid goal. And the level of poisons applied in populated areas by each method is infinitely too large since none of them are necessary."

Professor Chase is calling for a truly independent State investigation of this program and asking that charges be brought against those who are guilty of violating the public trust and guilty of child endangerment by endangering children's lives with toxins applied directly onto their bodies and into the air they must breath.

Glen Chase is a Professor of Systems Management specializing in Environmental Economics and Statistics. Glen served as an Associate Professor teaching graduate level courses in Systems Management at USC for eight years. He has taught at multiple universities in the Central Coast area, including The Naval Post Graduate School, The Monterey Institute of International Studies and Cal State University, Monterey Bay. Glen is also a Management Consultant. Currently, Professor Chase develops management systems to assist organizations that cater to the improvement of life for children with disabilities.

Background Note: the area of Systems Management within Chase's field involves management, communication and integration of complex and often highly specialized sciences. Systems Management was not generally recognized 100 years ago, when a single scientist could be a master of all areas related to his/her work. Today, it is essential.
Add Your Comments
LATEST COMMENTS ABOUT THIS ARTICLE
Listed below are the latest comments about this post.
These comments are submitted anonymously by website visitors.