Add an Event
Newswire
Calendar
Features
Home
Donate
From the Open-Publishing Calendar
From the Open-Publishing Newswire
Indybay Feature
Publish to Newswire
Add an Event
Related Categories: Central Valley | Drug War | Police State & Prisons
Central Valley Drug Wars
by Posted by Mike Rhodes (MikeRhodes [at] Comcast.net)
Friday May 16th, 2008 7:11 PM
Luke Scarmazzo and Ricardo Ruiz Montes were convicted of manufacturing and distributing marijuana and now face 20 years to life in a federal penitentiary. They operated a medical marijuana dispensary in Modesto and were arrested in September 2006. The trial, which concluded on Thursday, May 15 was held in the Federal Courtroom in Fresno. The photo below shows Luke’s daughters at a Noon rally on the second day of the trial. 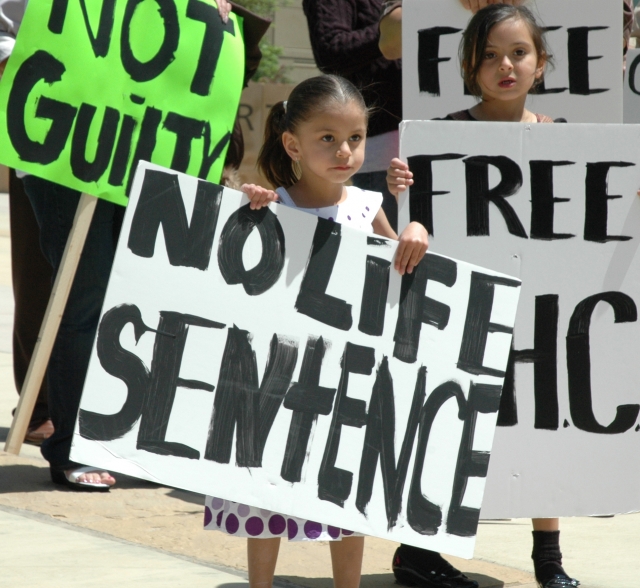 A jury convicted Luke Scarmazzo and Ricardo Ruiz Montes of manufacturing and distributing marijuana. The pair now face 20 years to life in a federal penitentiary for operating a medical marijuana business, which they had a license to operate, and paid taxes on. Below is background information on the case.

A controversial video Luke Scarmazzo produced was shown at the trial. You can see that video here:
http://www.krazmusic.com/video.swf

A federal court jury found two Modesto men guilty Thursday on federal drug charges for operating a medical marijuana dispensary in the Stanislaus County community that raked in somewhere between $6 million and $9 million in less than two years of operation.

Both men were convicted of manufacturing marijuana and distributing the drug, as well as operating a continuing criminal enterprise, a felony charge that carries a mandatory 20-year minimum prison term, with the possibility of life behind bars.
Jurors cleared each man on weapons charges, and they deadlocked on a conspiracy charge. U.S. District Judge Oliver W. Wanger scheduled a May 27 hearing, when the government will decide whether to retry the two men on the conspiracy charge.
Anthony Capozzi, who represented Scarmazzo, said after the verdict that it was "an unfair prosecution" in which the federal government piled on criminal charges against two people who never intended to break the law.
"It's an injustice for these people to go away for 20 years," he said.
But U.S. Attorney McGregor W. Scott not only defended the prosecution, he maintained that Montes and Scarmazzo's business had nothing to do with the medical use of marijuana.
"They were operating as drug dealers, plain and simple," he said in a telephone interview after the verdict.
Federal authorities raided the California Healthcare Collective in September 2006, following a long investigation that included undercover drug buys at the dispensary.
Scarmazzo and Montes said they never intended to break the law. The business, their attorneys said, was "above board," obtaining a business license, paying state and federal taxes and making sure each patient had a doctor's note before the purchase of any marijuana.
"Everything the defendants did was legal under state law," Capozzi said after the verdict. But neither he nor Robert Forkner, who represented Montes, were able to use state law as a defense because under federal law, marijuana remains illegal.
For their part, prosecutors said federal law not only trumped state law, but that the two men also violated state law because their business wasn't a nonprofit enterprise.
Defense attorneys offered evidence that the business was at one point transformed into a nonprofit organization, but prosecutors said Scarmazzo and Montes spent collective money for nonbusiness-related items in addition to their salaries, which Scarmazzo had said earlier reached $13,000 a month.
Among the items the two men bought were jet skis and a $180,000 Mercedes-Benz automobile.
"They grossed $9.2 million in two years," Scott said. "It is ludicrous to state that in any way it is not a for-profit corporation."
A key part of the trial was a hip-hop video that featured Scarmazzo uttering the line "[expletive] the feds."
Scarmazzo, a musician and aspiring hip-hop artist, took the stand to explain the video, saying it was his way of showing that the federal government "is turning a blind eye" to medical marijuana, which he said could help people.
The video was perhaps the most sensational part of the trial, and there were suggestions from Capozzi that Scarmazzo was on trial only because he dared to challenge the federal government's authority.
Gordon Taylor, special agent in charge of the U.S. Drug Enforcement Administration's Sacramento office, said after the verdict that wasn't true.
"This is not about a hip-hop video with a catchy tune," he said. "This is about two individuals who contributed to a significant marijuana problem in this state."
Jurors deliberated for two days before delivering their verdict, which ended a trial that was tense and featured heated exchanges between defense attorneys and prosecutors.
Scarmazzo and Montes showed no emotion when the verdict was read.
Later, however, when Wanger took attorneys into his chamber to discuss outstanding legal issues associated with the case, a flood of emotion overcame the men's family and friends.
Scarmazzo hugged his crying daughter and girlfriend, and Montes cried as he hugged his daughters and family members.
One juror, Craig Will of Tuolumne County, said after the verdict that he expected the two men to get probation or a few months in prison.
"I'm really appalled to discover that there's a 20-year mandatory minimum on the continuing criminal enterprise charge," he said.
Capozzi plans to seek a new trial and also will appeal to the 9th U.S. Circuit Court of Appeals because he said there was insufficient evidence to merit the continuing criminal enterprise verdict.
For his part, Scott said Scarmazzo and Montes used the state's medical marijuana law to hide an illegal business.
"Californians who genuinely, in their heart of hearts, believe that marijuana provides some medicinal value to them are profoundly disserved" by the two men, he said.
The reporter can be reached at jellis [at] fresnobee.com or (559)441-6320.

http://www.fresnoalliance.com/home
§Kraz-Business Man By Luke Scarmazzo
by krazkraz Friday May 16th, 2008 10:21 PM
Copy the code below to embed this movie into a web page:
Download Video (12.1MB) | Embed Video
This is a video we did on our own with a company called FCM. We are trying to bring a new sound and different view to music and hip hop. you cant achieve any kind of independence without economic independence. It starts with owning our own businesses in our communities and cultures. Thats what this video is about. Fight the system intellectually and economically.
http://www.krazmusic.com/
Add Your Comments

§The Ongoing Criminal Enterprise
by Richard Steeb
Saturday May 17th, 2008 9:40 PM
... are the "Justice" department thugs enforcing the damned lie that is Schedule I Cannabis. The entire industry that thrives on victimizing Cannabis "offenders".

The two defendents served their consumers all too successfully. Assume for a moment that the allegation they were "simple drug dealers" is worst-case accurate. Who was coerced into buying their product? What kind of pinko commie crap is this demonization of profit?

Ask the jurors how they feel after learning "the Whole Truth" following the kangaroo-trial...
Add a Comment
Support Independent Media
We are 100% volunteer and depend on your participation to sustain our efforts!