Add an Event
Newswire
Calendar
Features
Home
Donate
From the Open-Publishing Calendar
From the Open-Publishing Newswire
Indybay Feature
Publish to Newswire
Add an Event
Related Categories: Santa Cruz Indymedia | Arts + Action | Health, Housing & Public Services | Police State & Prisons
Beat It! This is Our Parking Lot!
by ~Bradley (bradley [at] riseup.net)
Friday Jan 25th, 2008 4:02 PM
As you literally may of heard, on January 23rd, the Santa Cruz Trash Orchestra and fellow drummers provided rhythm for the weekly community gathering in the Cathcart parking lot during the Santa Cruz Farmers Market. A vegetarian soup was provided to all interested by a renown local chef and supporter of peaceful community gatherings. The mushroom soup was able to soothe hunger and warm up the cold, although not rainy, afternoon and break the ice while people were beginning to gather around and wonder what was going to happen. Without needing any cues, the Santa Cruz Trash Orchestra got the party started and slowly but surely more and more people began playing music, dancing, sharing food, poi spinning, hacky sacking, talking, documenting and spectating.

One woman was arrested, for reasons that were unknown to her and witnesses to her arrest, by SCPD officer Cline. At least four police cars and a police SUV were stopped in Cathcart Street immediately after the arrest, but they decided to keep on rolling down Cathcart and left the community gathering and drum circle alone. In response to police harassment at the drum circle in previous weeks, a poster taped on a tree urged people to support the market drummers and asked Mayor Ryan Coonerty if having the SCPD issue citations for drumming was his way to Keep Santa Cruz Weird. 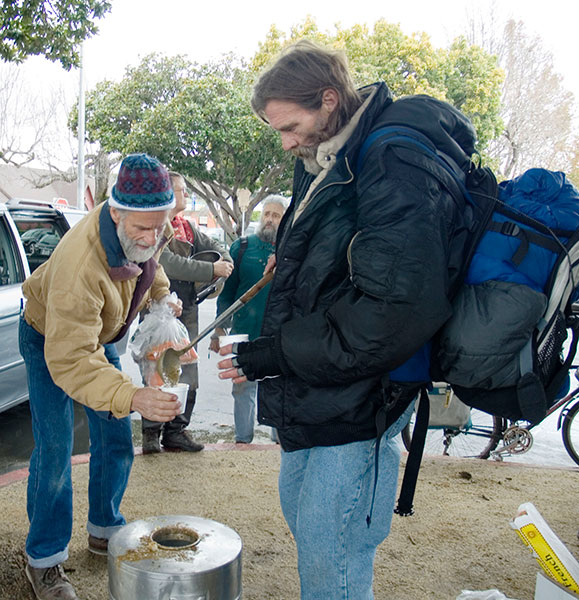 You can read more about the weekly gathering in the Cathcart parking lot (Lot No. 4) on Wednesday, January 23rd and watch video at: 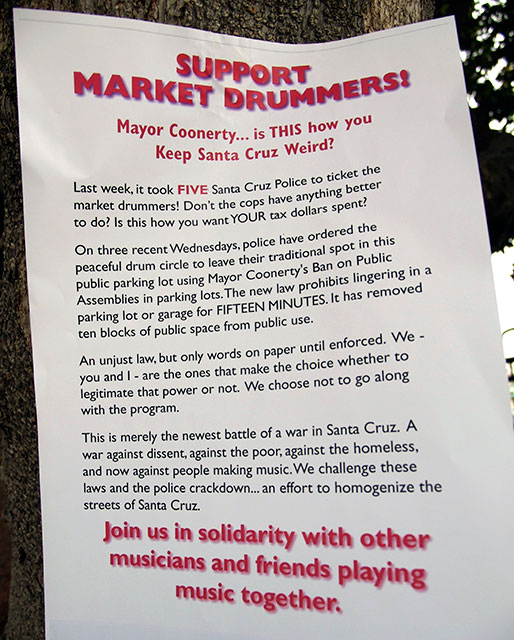 Mayor Coonerty... is THIS how you
Keep Santa Cruz Weird? 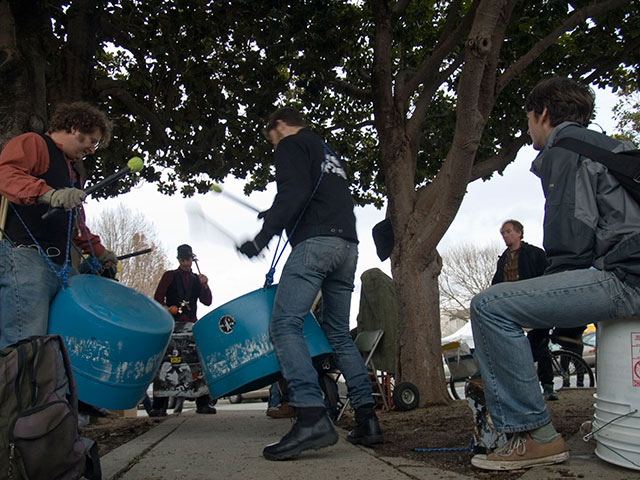 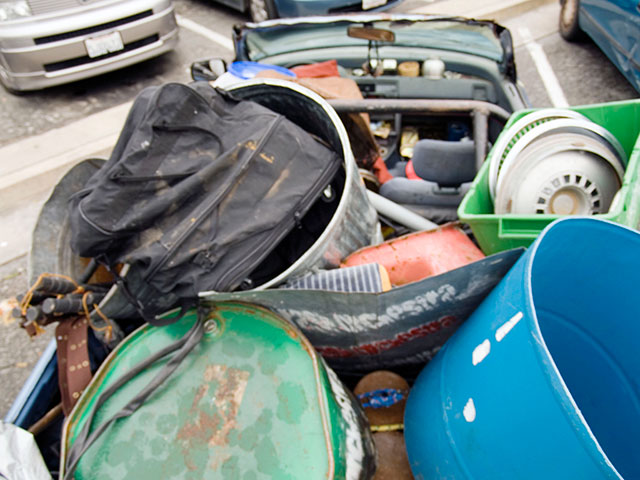 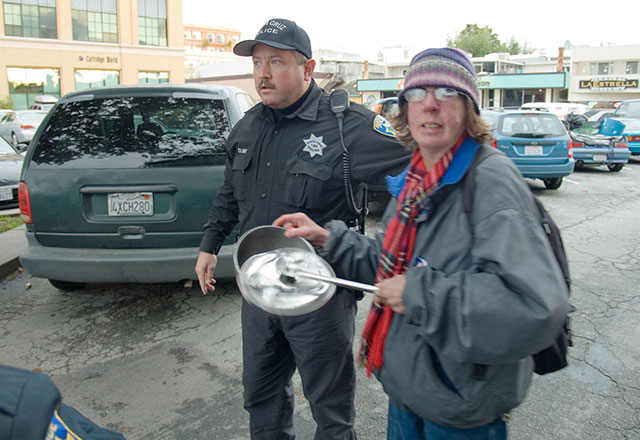 Is was unclear why this woman was apparently singled out, quickly arrested, and taken away in a police car by SCPD officer Cline.
§Cline
by ~Bradley Friday Jan 25th, 2008 4:02 PM 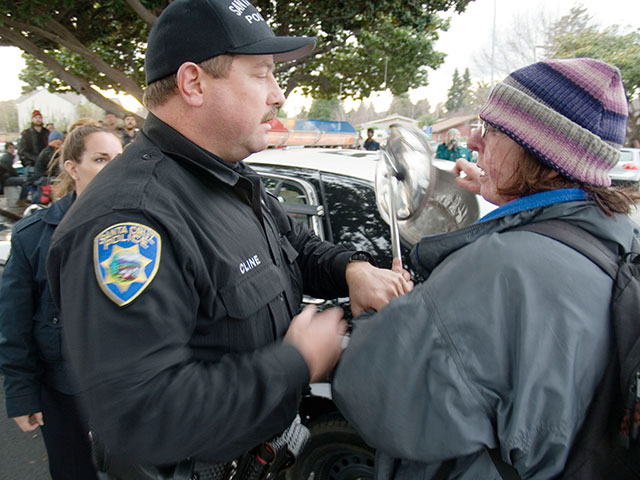 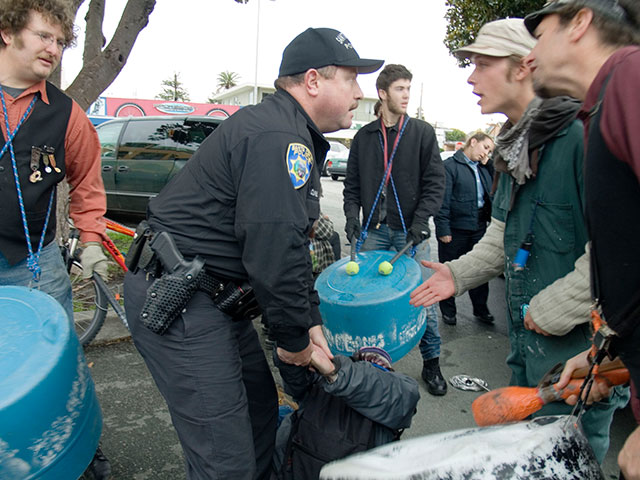 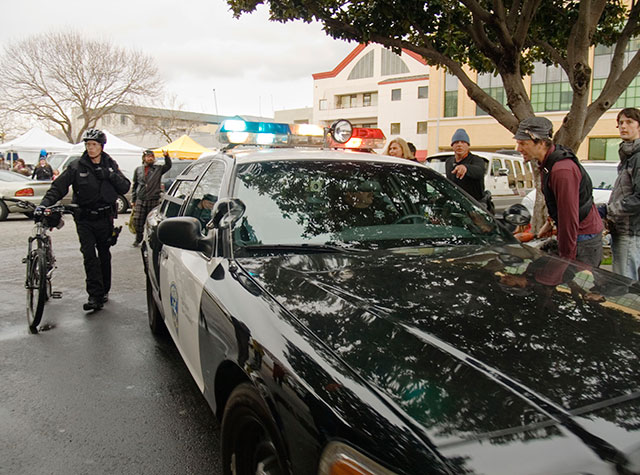 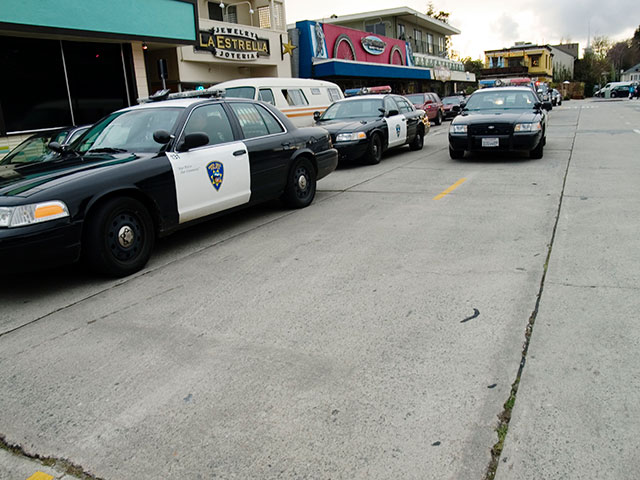 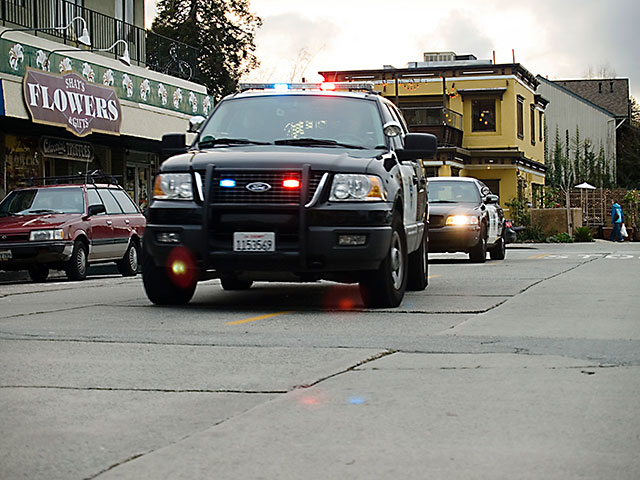 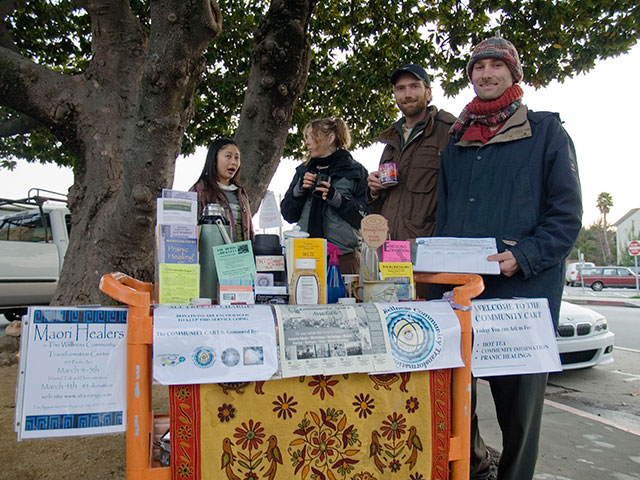 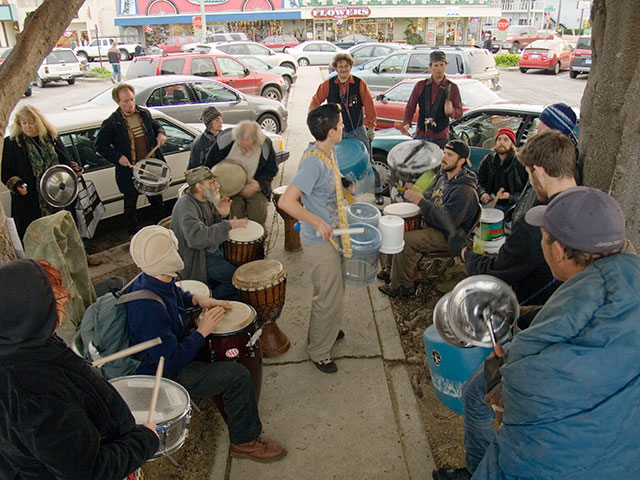 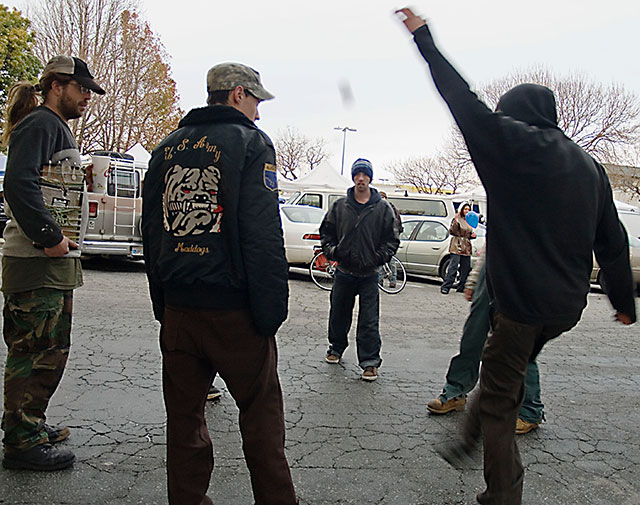 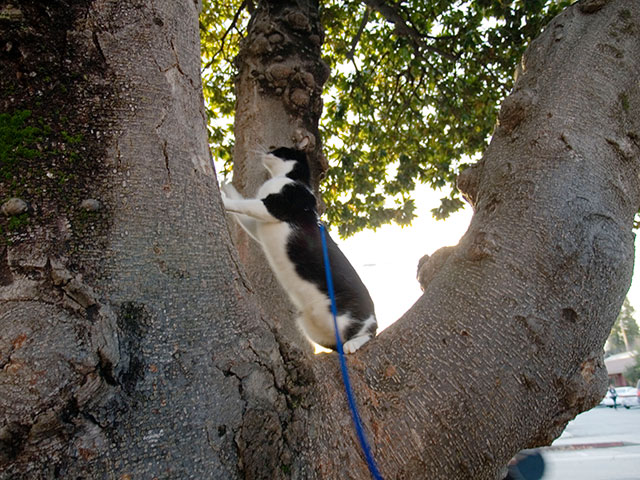 How long is a cat legally allowed to be in a tree in Santa Cruz?

There are many factors to consider, such as: Is the tree located on Pacific Avenue, in a parking lot, at San Lorenzo Park, or on Science Hill? Does the cat appear to be shopping, or simply hanging out? Does the cat look or smell dirty? Is the cat on a leash? And, of course, is the cat white or black? ;-)
§Parking Lot
by ~Bradley Friday Jan 25th, 2008 4:02 PM 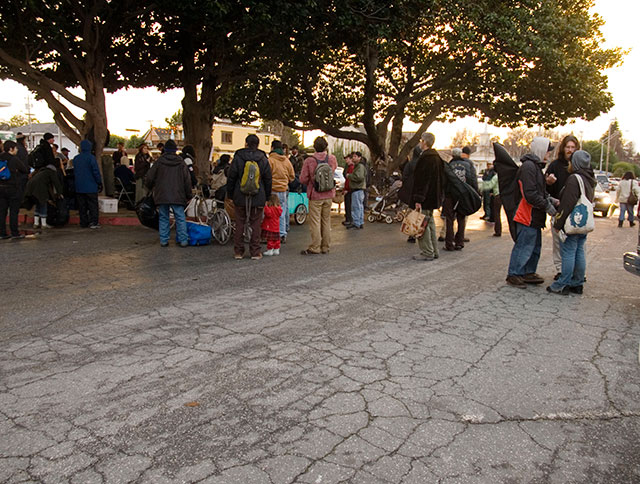 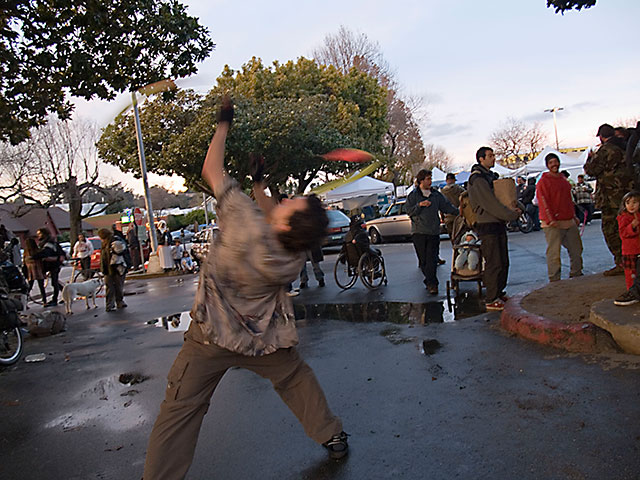 Poi is a form of juggling, or object manipulation with balls on ropes, held in the hands and swung in various circular patterns, comparable to club-twirling. It originated with the Māori people of New Zealand (the word poi means "ball" in Māori). Women and men used it to increase flexibility, strength, and coordination. It developed into a traditional performance art practiced mostly by women. This art, in conjunction with others including waiata a ringa, haka and titi torea, make up the performance of kapa haka (Māori culture groups).
http://en.wikipedia.org/wiki/Poi_(juggling)
§Trumpet
by ~Bradley Friday Jan 25th, 2008 4:02 PM 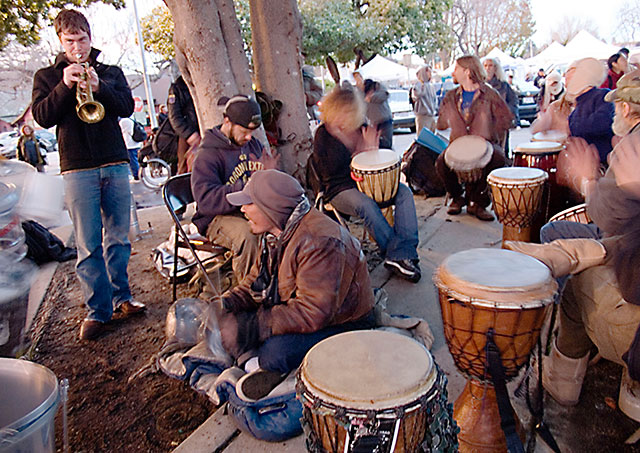 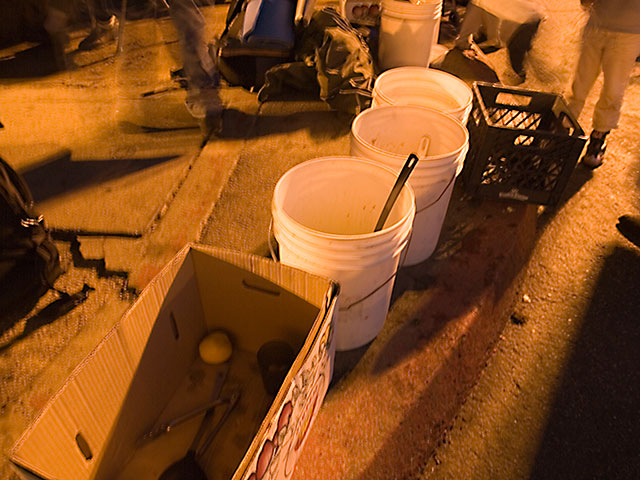 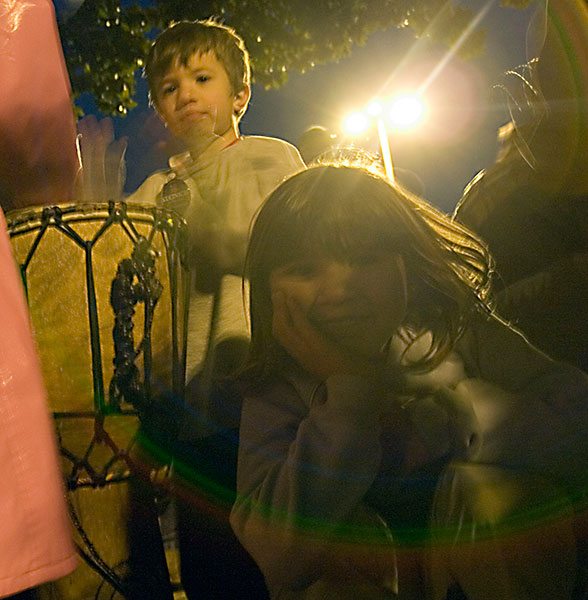