Newswire
Calendar
Features
Home
Donate
From the Open-Publishing Calendar
From the Open-Publishing Newswire
Indybay Feature
Publish to Newswire
Add an Event
Related Categories: Santa Cruz Indymedia | Anti-War
"Not at Home for the Holidays" Protest at Capitola Military Recruitment Center
by ~Bradley (bradley [at] riseup.net)
Sunday Dec 16th, 2007 1:34 AM
Santa Cruz County activists, including the Santa Cruz gaggle of the Raging Grannies, demonstrated for peace in front of the Military Recruitment Center in Capitola on December 15th. The last time the Grannies sang songs at the recruitment center on June 26th, they refused to leave the entrance of the Army recruiters after being denied entry into the building and were eventually arrested and escorted to the police station in handcuffs. This time around, the Navy and other branches of the military wanted to avoid dealing with the Raging Grannies, so they, "Closed on December 15th, 2007 in support of gathering CARE package materials to send to the Sailors who are unavailable to be home during the holidays." 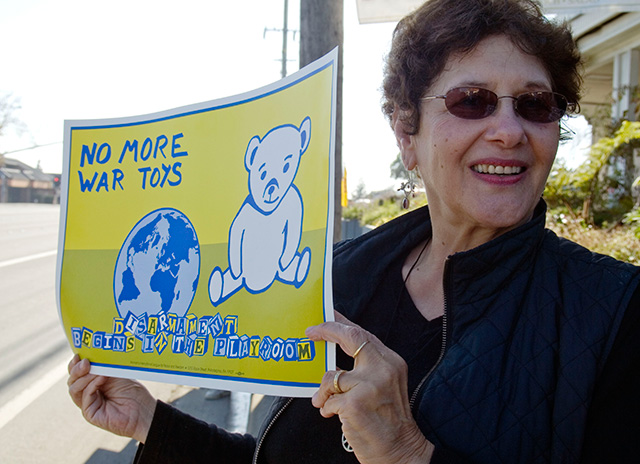 The following information was distributed on flyers to people who attended the demonstration or passed by on foot, and in same cases given to car passengers.

180,000 American troops are in Iraq or Afghanistan, dodging bullets and bombs. Thousands more are away from their families, on duty abroad. All of them are

Not at Home for the Holidays

2007 is the deadliest year yet for U.S. troops in Iraq: 885 dead so far, and 5,688 wounded. And don't forget the hundreds of thousands of Iraqi (and Afghani) dead, nor the four million refugees.

Each death, each wound, each trauma is a personal tragedy. And yet our government plans more. Iraqi government sources confirm that the U.S. plans to keep 50,000 troops permanently in their country. Neither their parliament nor our Congress has approved this, but the bases are already being built. The U.S. has 823 foreign military bases worldwide; its time to start closing them.

There is still talk of bombing Iran, even though it does not have a nuclear weapons program. Don't attack Iran!

Australia, Britain and Poland (our only fighting allies) are planning to cease combat in Iraq and to withdraw their troops. So should we. Iraqis and Americans agree: It's time to end this war.

What You Can Do

Learn what is really going on, both in the rest of the world and here in the U.S. Tell your friends, and tell Congress not to fund the war. Find out about the work of Activist Groups such as

Several websites collect and reprint important articles, for instance:
truthout.org, antiwar.com, truthdig.com
There is lots of news on the web, but always check the sources. Good information can also be found (often buried) in the New York Times and other major newspapers -- read them carefully and critically too.

Join us, every Friday, 5-6 P.M., at the weekly Vigils for Peace: in Santa Cruz at the Town Clock and at Pacific and Cooper, and in the Watsonville Plaza on Main Street, by the Plaza. Please become part of the peace community.

Call Nancy Pelosi, the Speaker of the House:

You can find contact info for all your Senators and Representatives at congress.org, you can call toll-free -- 800 839 5276.

This flyer was produced by Pete Shanks for People United for Peace (PUP). The statistics came from CBS, the Department of Defense, the New York Times, Refugees International, USA Today, and the Washington Post, among others. For detailed sources, email pete {at} wordsontheweb.com. 12/15/07
§Santa Cruz Raging Grannies
by ~Bradley Sunday Dec 16th, 2007 1:34 AM 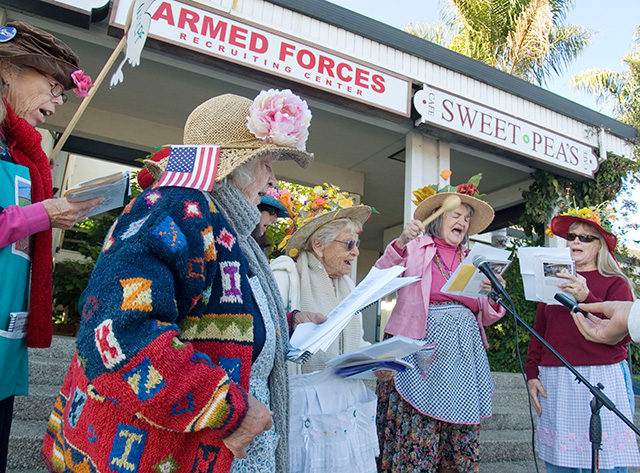 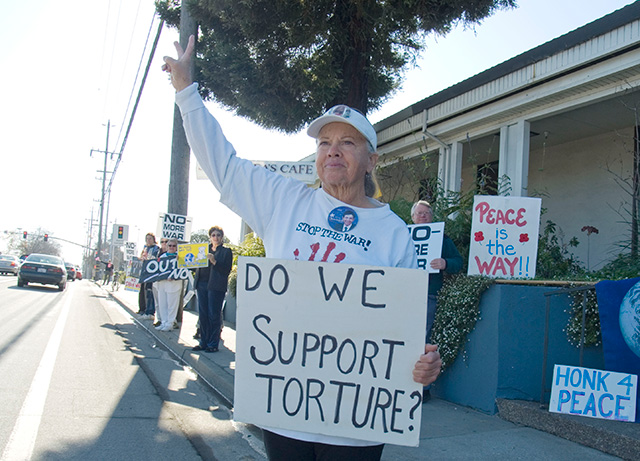 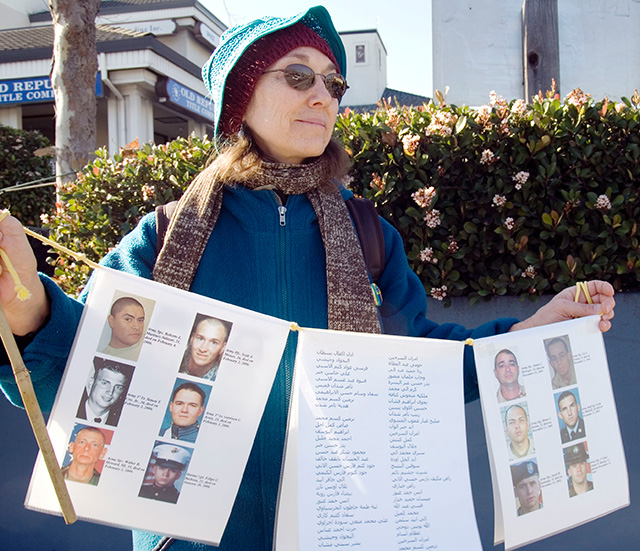 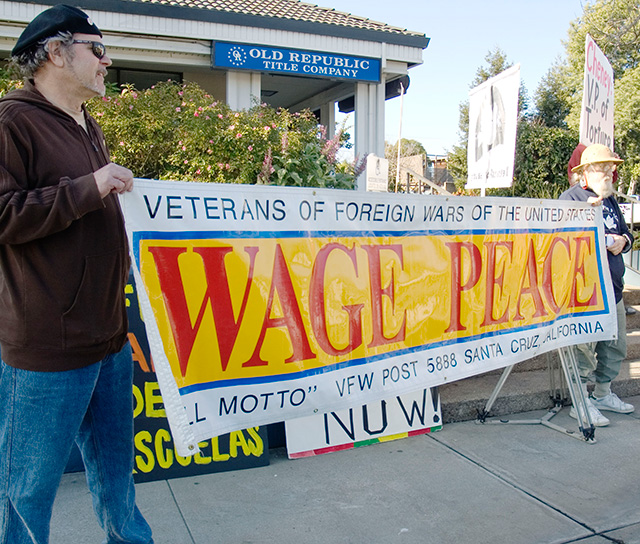 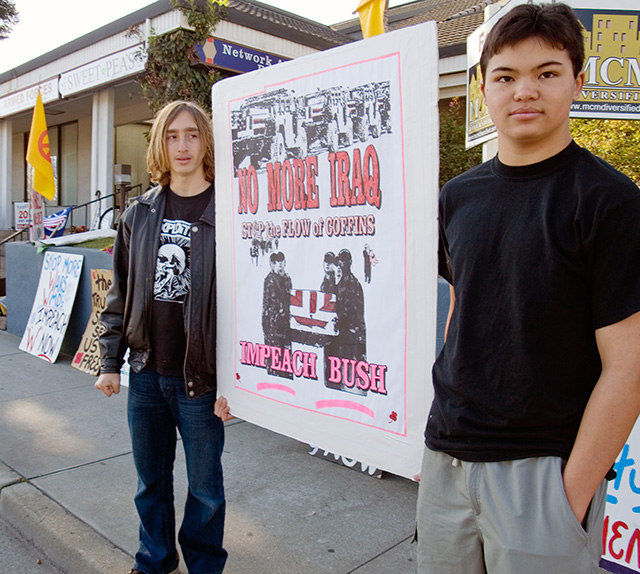 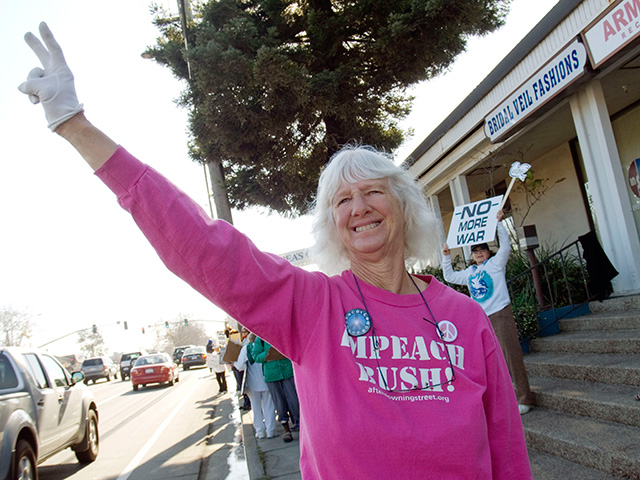 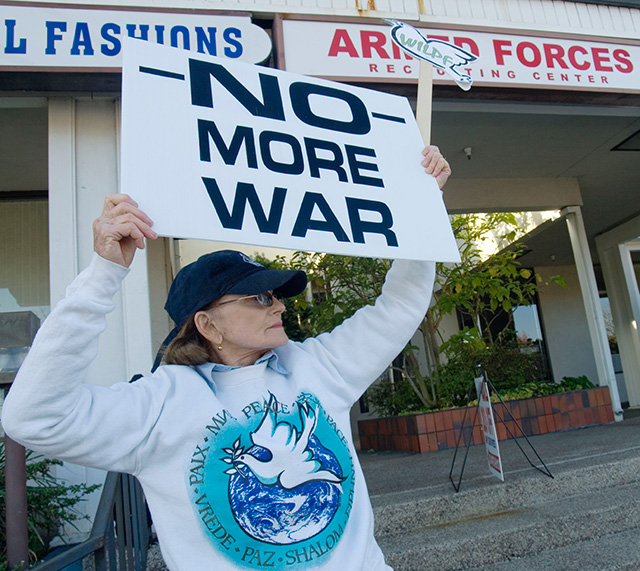 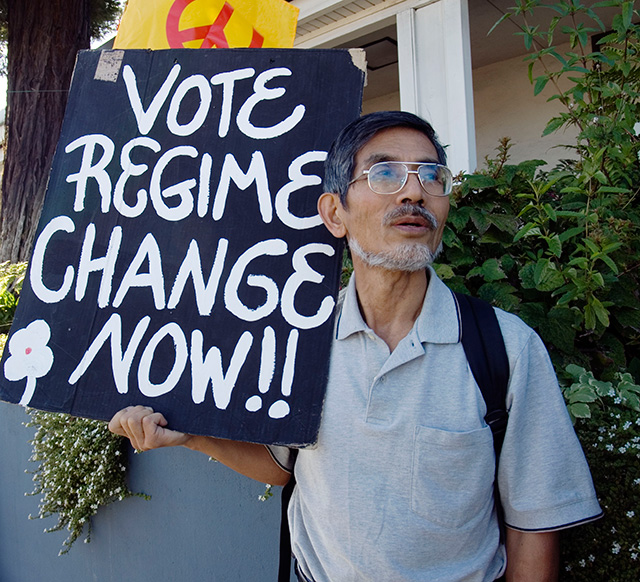 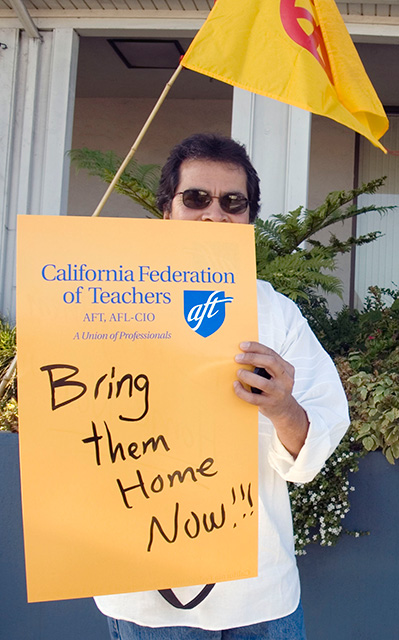 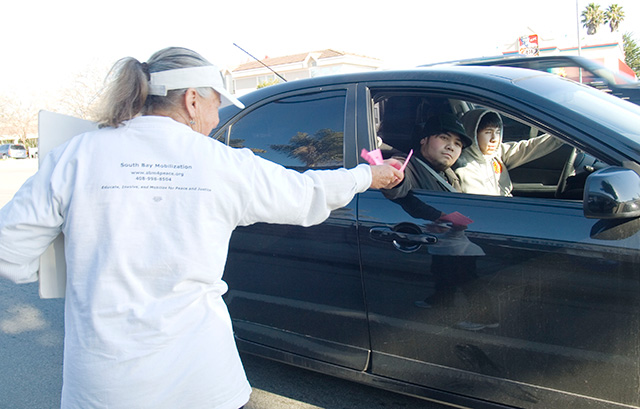 A women wearing a South Bay Mobilization shirt gives a flyer (text printed above) to the passenger of a car driving down 41st Avenue in Capitola.
http://southbaymobilization.org
§Out Now
by ~Bradley Sunday Dec 16th, 2007 1:34 AM 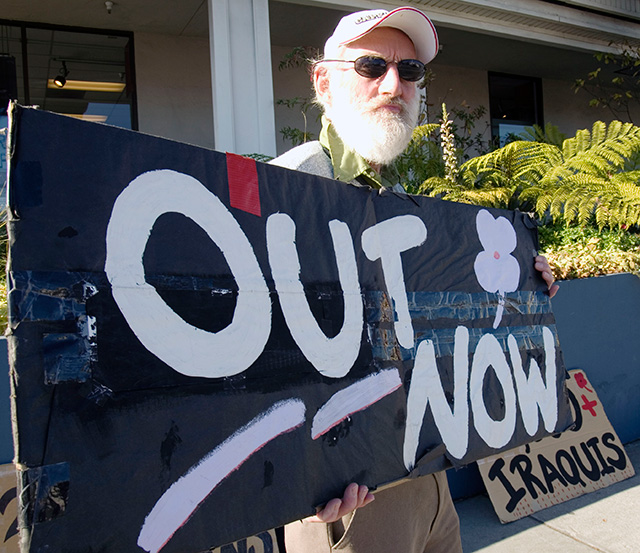 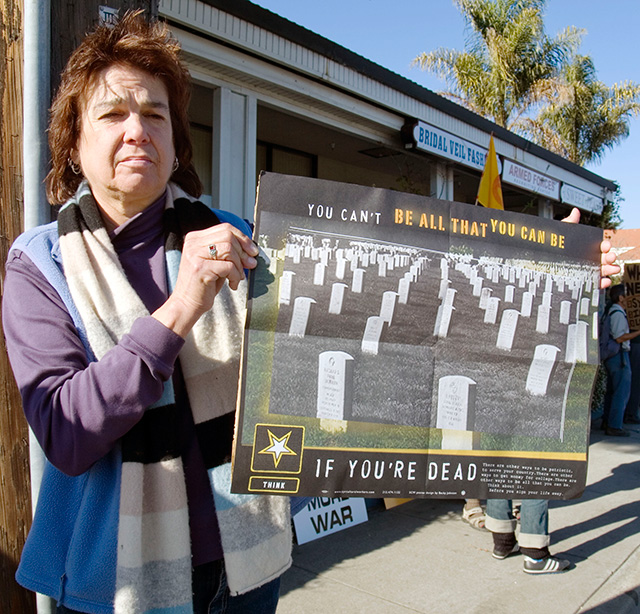 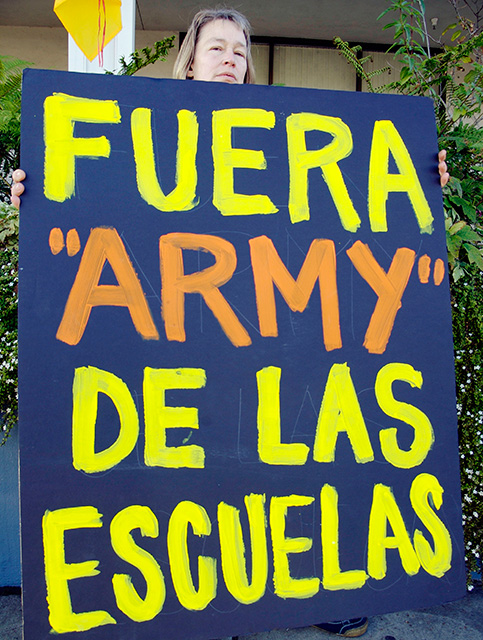 Across the street from the Military Recruitment Center, activists hold signs for peace in front of a KFC and AW fast food restaurant.
§Corporate Media: KION 46
by ~Bradley Sunday Dec 16th, 2007 1:34 AM 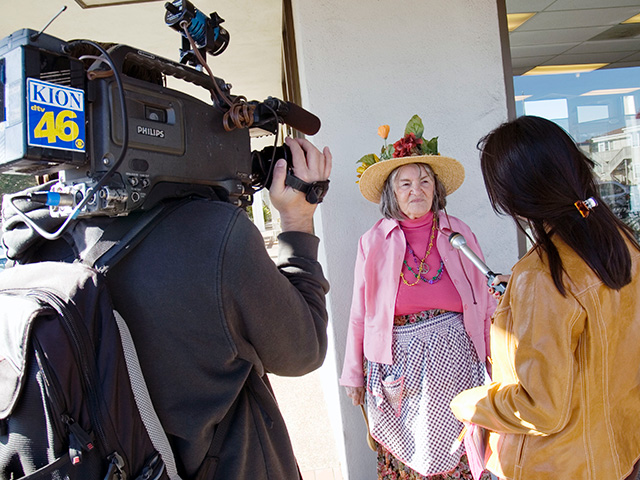 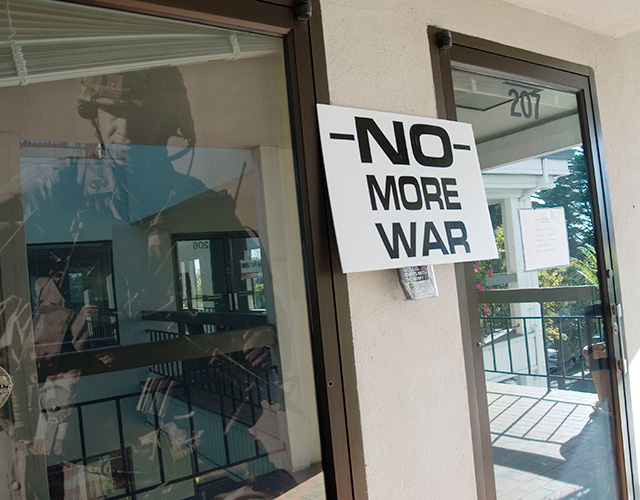 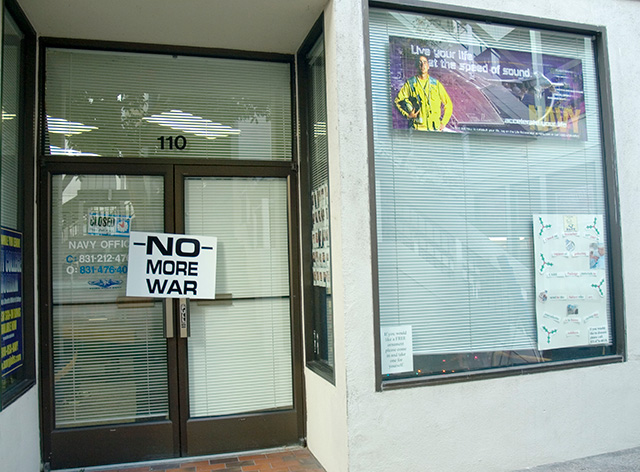 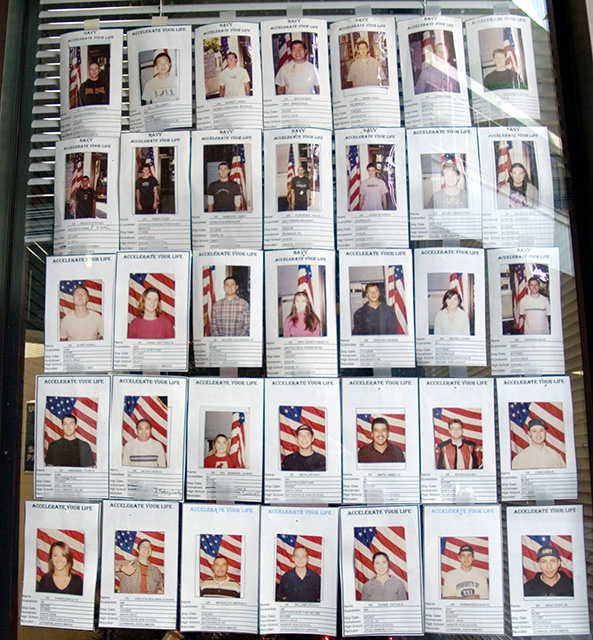 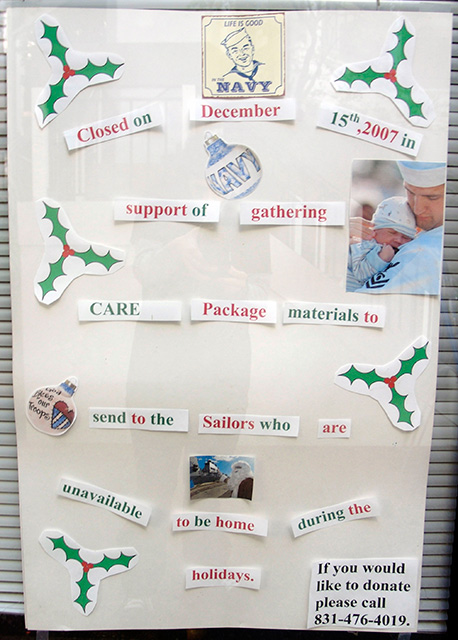 "Closed on December 15th, 2007 in support of gathering CARE package materials to send to the Sailors who are unavailable to be home during the holidays."
§More War
by ~Bradley Sunday Dec 16th, 2007 1:39 AM 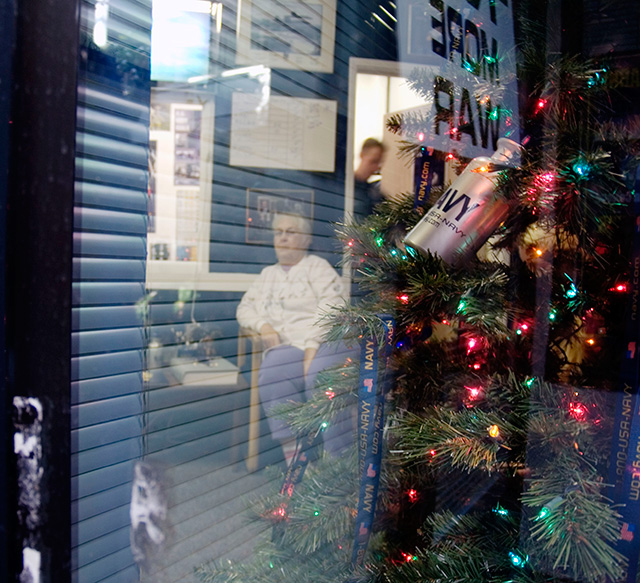 When I looked inside the Navy recruiter office, it did not look like they were, "gathering CARE package materials to send to the Sailors," rather, it looked like they were avoiding the Raging Grannies.
§Air Force... Closed
by ~Bradley Sunday Dec 16th, 2007 1:40 AM 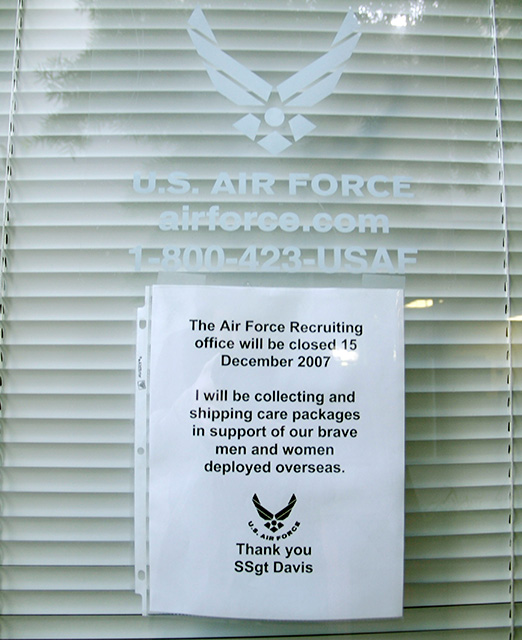 §Raging and Roaring with the Santa Cruz WILPF Raging Grannies
by ~Bradley Sunday Dec 16th, 2007 1:43 AM 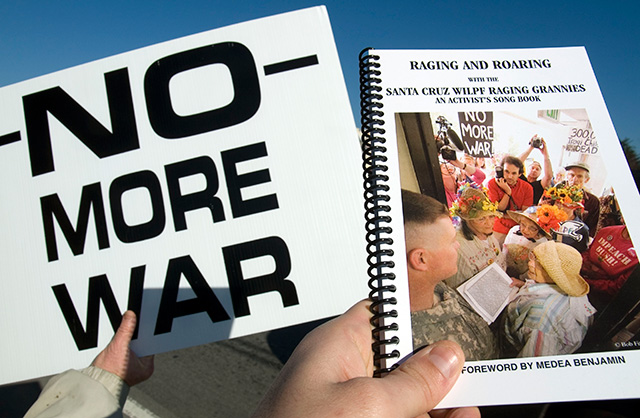 The new Activist's Song Book with the Santa Cruz WILPF Raging Grannies. The cover photo was taken by Bob Fitch on June 26th, 2007, during the previous protest with the Raging Grannies at the Military Recruitment Center in Capitola.

Peace Advocates Arrested At Capitola Peace Demonstration
http://www.indybay.org/newsitems/2007/06/27/18430928.php
Add Your Comments
LATEST COMMENTS ABOUT THIS ARTICLE
Listed below are the latest comments about this post.
These comments are submitted anonymously by website visitors.