Add an Event
Newswire
Calendar
Features
Home
Donate
From the Open-Publishing Calendar
From the Open-Publishing Newswire
Indybay Feature
Publish to Newswire
Add an Event
Related Categories: Americas | California | San Diego | Global Justice & Anti-Capitalism | Immigrant Rights | Police State & Prisons
Border Patrol Brutality Against Nonviolent No Borders Campamentistas
by no borders camp media folks
Monday Nov 12th, 2007 11:18 PM
"I think that people should really understand that the border is a totally militarized zone and that this isn't your normal police repression at a demonstration. This is an occupation force protecting its institutional apparatus of occupation. And that is the real context of what happened today, rather than simple policing tactics."

On Sunday, participants in the first international solidarity action camp to take place on both sides of a border, the No Borders Camp, dismantled the camp and marched west on either side of what has become a 15 foot wall dividing Mexicali and Calexico, converging on the port of entry to protest the militarized border. Participants demonstrated peacefully until the US Border Patrol, without giving an order to disperse or other warning, brutally attacked those on the US side with point-blank rounds of pepper-spray pellets, batons, and swarm tactics, leaving several badly injured. This event was the final action of the No Borders Camp, and came after a week of peaceful confrontation and resistance to the border system. The brutality directed against campamentistas, well-documented with video, photographs and timely eyewitness interviews, is emblematic of the largely hidden violence migrants face every day.

The three arrestees have been charged with impeding a federal officer and are being held at Imperial County Jail in El Centro. Two of them, Steve Murphy and Erik Wackernagel, have spoken to and been visited by legal support. The third is a US permanent resident, faces possible deportation related to these charges and is not being allowed visitors. Two arrestees have requested and been refused medical attention. Please call the jail to pressure them to provide Steve and Erik with vegan/vegetarian food and immediate medical attention for the arrestees: 760.339.6367, Further support and solidarity information coming soon... 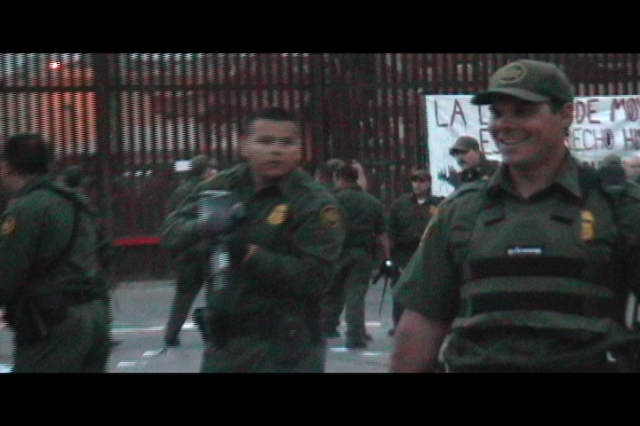 http://sandiego.indymedia.org
Add Your Comments
Support Independent Media
We are 100% volunteer and depend on your participation to sustain our efforts!