Add an Event
Newswire
Calendar
Features
Home
Donate
From the Open-Publishing Calendar
From the Open-Publishing Newswire
Indybay Feature
Publish to Newswire
Add an Event
Related Categories: San Diego | Santa Cruz Indymedia | Anti-War | Education & Student Activism | Global Justice & Anti-Capitalism | Immigrant Rights | Police State & Prisons | Racial Justice
2007 Practical Activism Conference at UCSC featuring Angela Davis
by ~Bradley (bradley [at] riseup.net)
Saturday Oct 27th, 2007 11:56 PM
Hundreds of students crowded into the College Nine-Ten Multipurpose Room on October 27th for the 5th annual Practical Activism Conference at UC Santa Cruz. The room's capacity was maxed out when Angela Davis spoke and approximately 175 students heard the speech through speakers setup outside the Multipurpose Room. Activist organizations based on campus and in the community were tabling, food was provided and the workshops were very well attended.
Listen now:
Copy the code below to embed this audio into a web page:
Download Audio (13.2MB) | Embed Audio
Use the link above to listen to the presentation by Angela Davis. 38:33 minutes.

Angela Davis spoke about many topics, including solidarity with the antiwar demonstration in San Francisco and those around the United States taking place at the same time, the meaning of "Practical Activism", growing up in Birmingham, Alabama during Jim Crow segregation, the importance of imagination in activism, a brief history of her persecution, organized resistance in the 1930s and 1960s, prisons, the juggernaut of privatization, attacks on education and the ongoing plans for the privatization of the University of California, the racist theories of James Watson, connecting the issues, the plan for a Blackwater training camp in Potrero, the role Blackwater wants to play in repression along the US / Mexico border and the need for global solidarity.
§Practical Activism Conference
by ~Bradley Saturday Oct 27th, 2007 11:56 PM 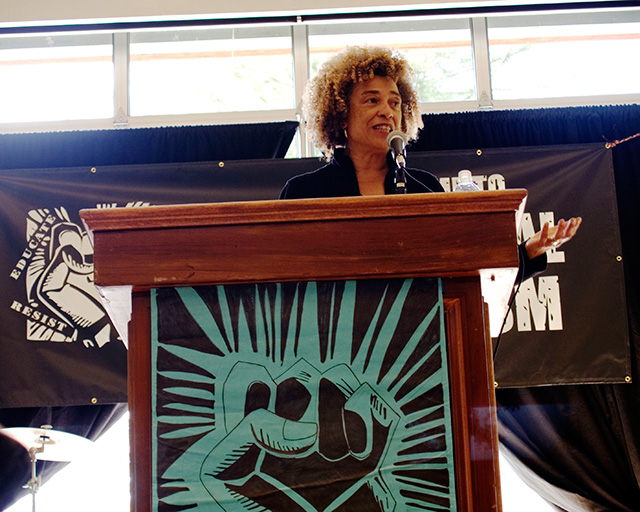 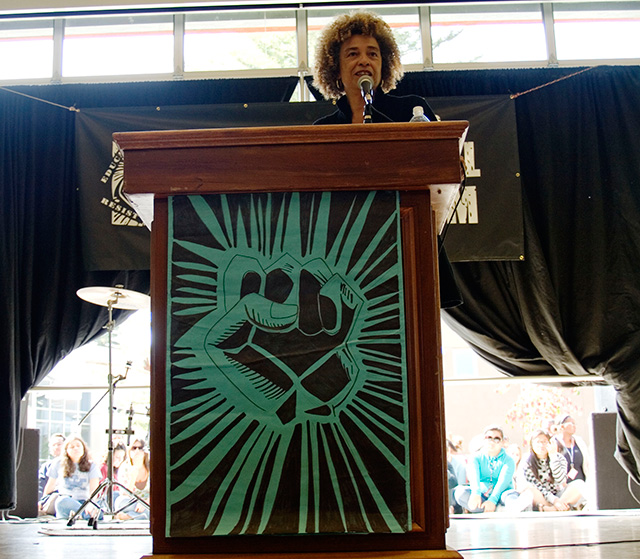 The room's capacity was maxed out when Angela Davis spoke and approximately 175 students heard the speech through speakers setup outside the Multipurpose Room.
§Workshop on Immigration
by ~Bradley Saturday Oct 27th, 2007 11:56 PM 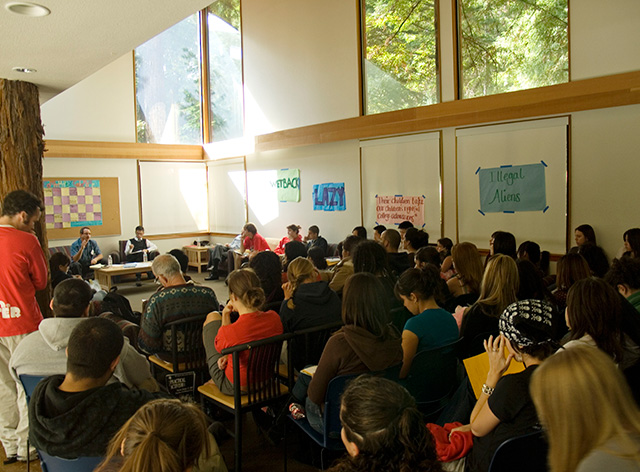 A workshop on immigration in the Community Room at College 10
§Jonathan Fox and Jose Palafox
by ~Bradley Saturday Oct 27th, 2007 11:56 PM 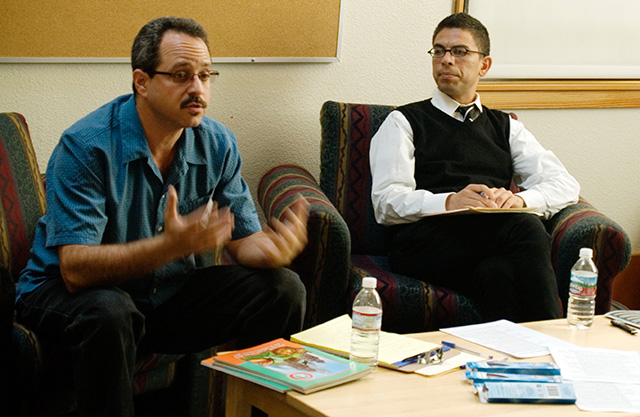 "Across the Border: A Critical Look at Immigration"

This workshop focused on the impact of immigration on the US economy and other aspects of our society, while debunking myths about immigration. Locally, it will address the ICE Raids in Watsonville and also provide students the means to get involved in the community. Latin American and Latino Studies professors Jonathan Fox and Jose Palafox led the discussion.
§"Crimes Against Humanity: Hurricanes Katrina & Rita"
by ~Bradley Saturday Oct 27th, 2007 11:56 PM 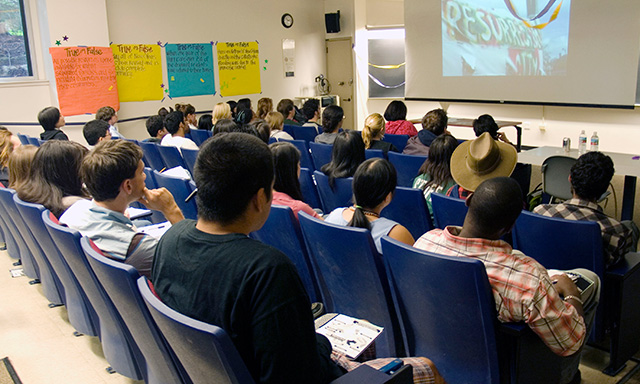 The mainstream media's representation of Hurricanes Katrina and Rita is inaccurate, most notably in terms of the general understanding of the immediate rescue and relief given to New Orleans residents and the city's current state.
§"Buyer Be-Aware: Being a Conscious Consumer"
by ~Bradley Saturday Oct 27th, 2007 11:56 PM 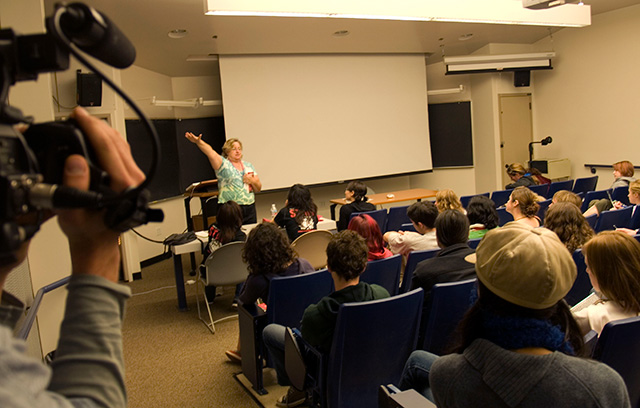 This workshop fostered awareness and provided tools regarding our responsibilities as consumers in the local and global communities. Dana Frank, professor of History and Labor Studies, spoke with student activists and discussed the global history of consumerism and addressed sustainable and social consumer movements.
§"Pass the Teargas: Student Activism at UCSC"
by ~Bradley Saturday Oct 27th, 2007 11:56 PM 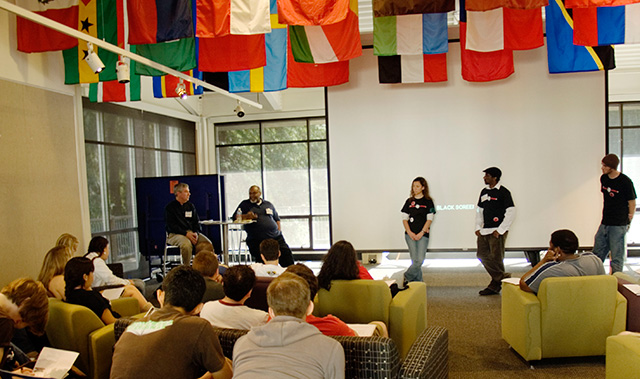 UCSC Alumni and former UC Alumni Regent, Gary Novack, and History of Consciousness graduate student, Gregory Caldwell, facilitated an interactive discussion about what it means to be a student activist in today's socio-political climate. The workshop also covered a brief history of activism at UCSC, including the protest against the UC Regents on October 18, 2006 and the campaign in solidarity with Alette. 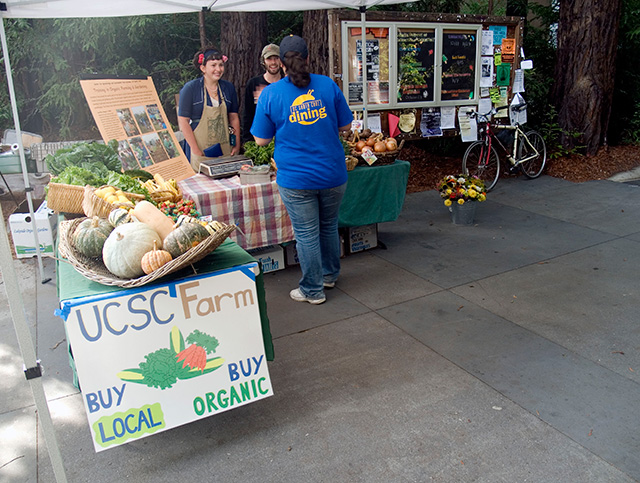 An employee at the College Nine-Ten dinning hall learns about the Farm at UCSC.
§Staff
by ~Bradley Saturday Oct 27th, 2007 11:56 PM 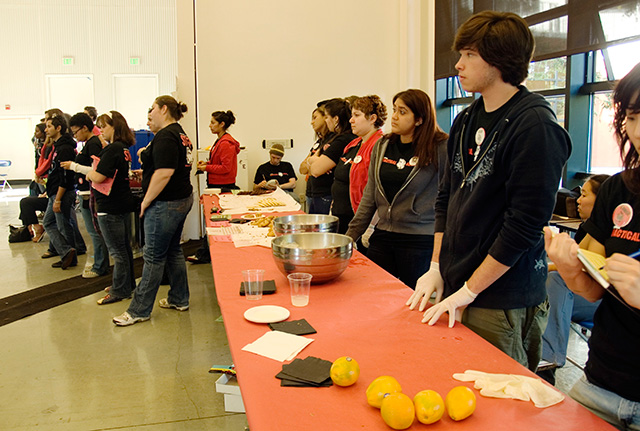 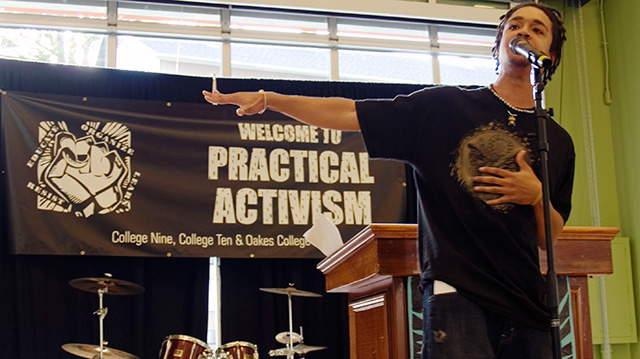 David Scott is a renowned spoken word artist originally from Sacramento. He is a UCSC Alum (Theater Arts) and is an active member of his community.
§Audience
by ~Bradley Saturday Oct 27th, 2007 11:56 PM 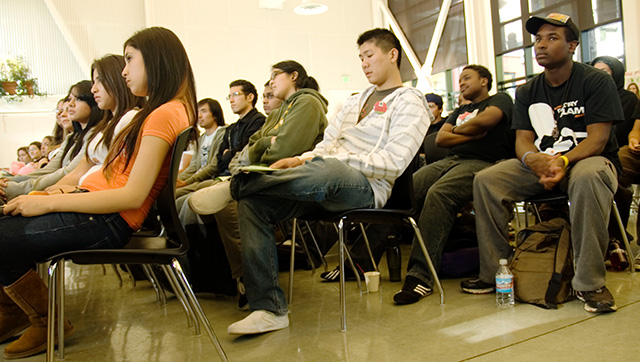 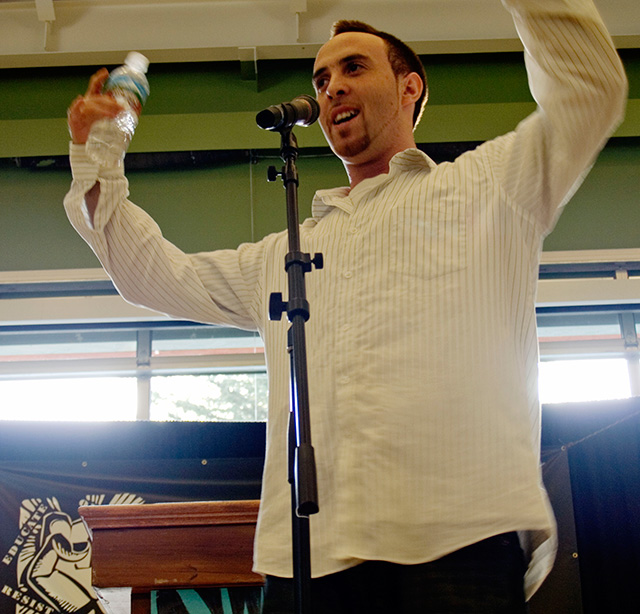 Daniel "Fritz" Hershel Silber-Baker, is a native of south Berkeley now living in Brooklyn, NY. Between 2004 and 2006 he was a crucial member of the UCSC team at the College Unions Poetry Slam Invitational. In 2006, he was voted "Best Poet" at the Collegiate National Championships. He shares his poems with a sense of urgency that calls us to take action in re-humanizing our own lives and the world around us. 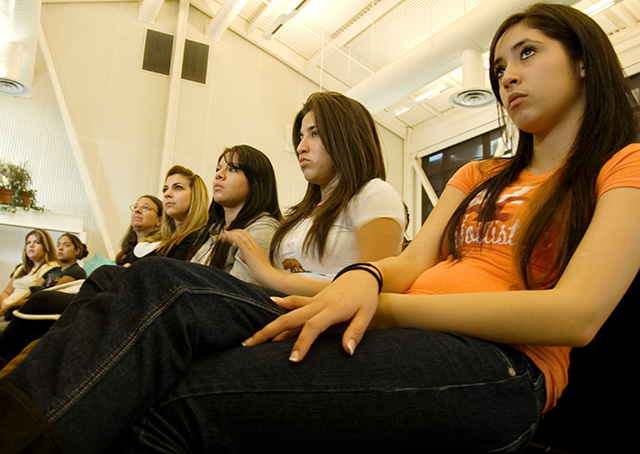 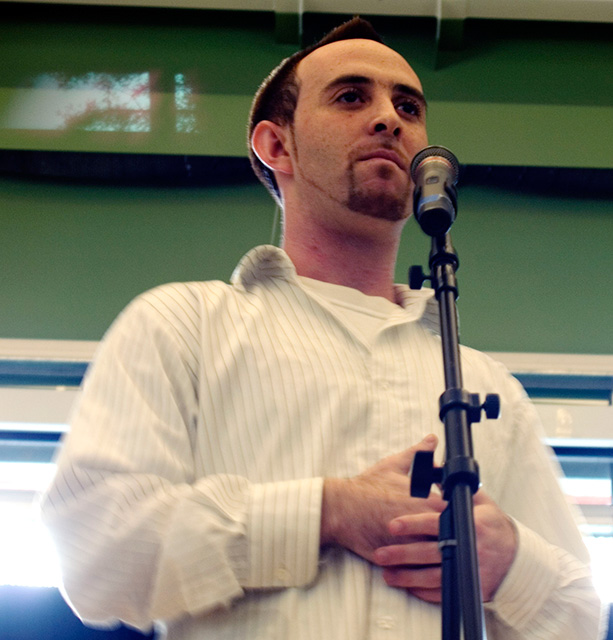