City of Fresno Wants to make Camping a Crime

by Mike Rhodes (mikerhodes [at] comcast.net)
The City of Fresno wants to pass an ordinance that would ban camping as a way to end homelessness. 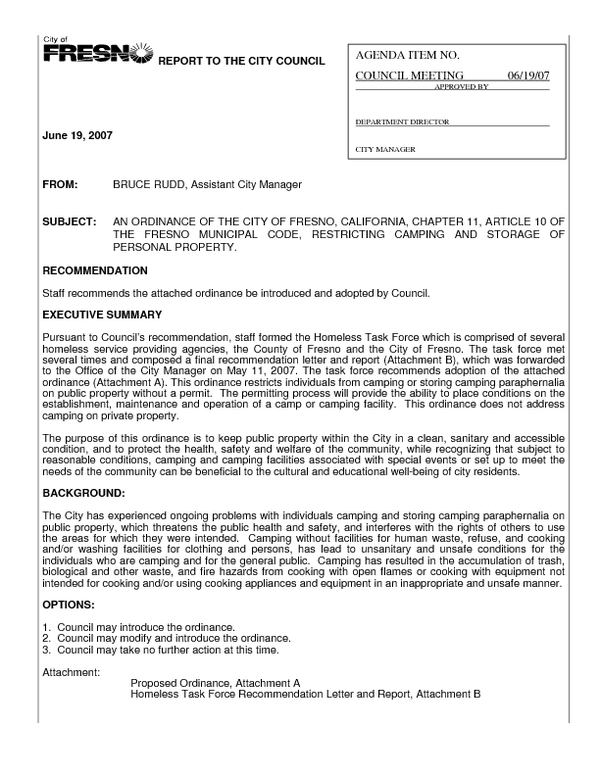 The Fresno City Council will consider an ordinance on Tuesday, June 19, 2007 that would ban camping (without a permit) in the City of Fresno. The ordinance is targeting the thousands of homeless people (the latest estimate is that there are over 8,000 homeless people) in this community that are forced to sleep outside at night. If passed, this ordinance would add to other “quality of life” ordinances directed at the homeless. Those ordinances include one passed last year that makes it a crime to push a shopping cart (away from the business that owns it) and an earlier ordinance that makes it illegal to panhandle.

The proposed ordinance (on the agenda for 9:05 AM, but they always run late), can be downloaded or read from this page in a .pdf format. The ordinance was recommended by a homeless task force headed by the infamous Rev. Larry Arce. See earlier story - Holy War Against the Homeless here: http://www.indybay.org/newsitems/2007/04/20/18402635.php . There are no homeless people on the “Homeless Task Force.”

The stated goal of the task force is the establishment of a plot of land where the homeless can camp. This is a part of Fresno mayor Alan Autry’s initiative to set up a “free zone” where homeless people can go. See: http://www.indybay.org/newsitems/2007/04/17/18400746.php . The mayor’s pledge at this press conference (see website above for the details) was that he would establish an encampment where homeless people could go to escape from the attacks they are under. This camp would have portable toilets, trash bins, running water, and a trailer from the County of Fresno that will provide social services.

Instead, what the homeless have received are more evictions (see: http://www.indybay.org/newsitems/2007/06/12/18427051.php ), harassment, and ordinances criminalizing poverty. The 60 day (self imposed) deadline in which the mayor promised to set up this free zone has come and gone. With property owners in the area of the proposed encampment up in arms (see http://www.indybay.org/newsitems/2007/06/13/18427207.php ) about the location and the homeless themselves ambivalent if not down right hostile to the proposal, the mayor’s plan and the Homeless Task Force seem destined for failure. One homeless person told me that they are not going to get her “into that concentration camp. They don’t have any shade, it is all fenced in, and full of goat head thorns.” Another homeless person told me that it looks like the city is trying to push them as far south as they can. This assessment was somewhat confirmed by city council member Jerry Duncan’s call-in to right wing talk show host Inga Barka’s radio show about a week ago. Duncan told Barka that the goal was to move the homeless people so they are not so visible in the downtown area and that once they establish this camp it will give them (the city) the ability to clean up illegal encampments elsewhere.

Can the City of Fresno successfully manage homeless people by forcing them into the industrial section of the old downtown area and passing ordinances against them camping? Perhaps someone could mention at the meeting tomorrow that a better solution might be to work for more affordable housing, a living wage, and universal health care. Until that happens, we can try to end homelessness by providing homeless people with housing. Studies show that providing housing for homeless people is a whole lot less expensive than the current public policy. Plus - it is a whole lot better for homeless people too.
END_OF_DOCUMENT_TOKEN_TO_BE_REPLACED
Add Your Comments
Latest Comments
Listed below are the latest comments about this post.
These comments are submitted anonymously by website visitors.
TITLE
AUTHOR
DATE
Fresno's New Anti-Homeless Camping Law Flouts Federal Court Jones Decision
Robert Norse
Report back from City Council meeting
Mike Rhodes
Houseless people's search for safe sleep sites
Surviving FEMA's police state detention camps
Camping Bans are no solution
Becky Johnson
Support Independent Media
We are 100% volunteer and depend on your participation to sustain our efforts!