Add an Event
Newswire
Calendar
Features
Home
Donate
From the Open-Publishing Calendar
From the Open-Publishing Newswire
Indybay Feature
Publish to Newswire
Add an Event
Related Categories: San Francisco | Animal Liberation
parrot almost snatched- let's watch the humans, too!
by THERRON
Sunday Jun 17th, 2007 9:33 PM
Whether you're for the feeding the wild parrots of Telegraph Hill or support the ban - we need to watch our fellow human beings as well. I saw a couple try to snatch one of the parrots today by holding out an apple. The couple were by themselves, close to the street & ready to jump in their car. Let's watch people as well and make sure no harm is coming to the parrots.
I was on the #1 bus (06/17/07 about 7:25p.m.) across from the park when I noticed a couple feeding a lone parrot with a large apple. The man & woman were away from the usual crowd, closer by the street when the man "rolled up" the parrot in his t-shirt. I jumped off the bus and was able to stop them by yelling at the man, and he let go of the parrot beneath his t-shirt. The couple drove a black car from Hayward (sorry, couldn't get the license #). It was so sad to see that poor defenseless parrot in that man's hand..I just happen to come along at the right time. Whether you are for for the feeding of the parrots or for the ban - let's watch our fellow human beings a bit closer. If we can keep a watch for people who are feeding the birds by themselves, close by the cars - yell out if you see them harming the parrots - be listening, too. I was just one person but it would have been better if people could have helped by backing me up. It was so shocking to see someone just grab the poor parrot - let's watch out for the parrots and for some of the criminals who would harm the parrots.
Add Your Comments

Add a Comment
§Parrot snatching
by narudigam
Monday Jun 18th, 2007 9:04 PM
This is a direct result of the parrots being too tame for their own good. And who's fault is that? The people who continue feeding them and who made the feeding ban necessary.

When will these people realize that the birds must not be hand fed, but must return to their wild state for their own health and safety? I can't figure out if they are stupid, crazy or both.
Add a Comment
§Go ahead, Nancy
by Alex Bantov
Tuesday Jun 19th, 2007 12:16 AM
Keep spreading the word around the internet about the feedings and where they happen!
Add a Comment
§Anti feeding T-shirt
by nabrudigam
Tuesday Jun 19th, 2007 1:01 AM
I have seen your picture on http://www.youtube.com and other people from your group such as Joanne, Laura, Jeff, Julie, Jared and others, not only on http://www.youtube.com and http://www.flickr.com, but on TV as well saying how the feedings are not harmful and that there is no need for the ban, but this incident of the attempted stealing of a parrot proves you all wrong.

Even after the Board of supervisors passed the ban, there you were on "you tube", showing off as usual. Not only that, you show off in two languages which makes you twice as much of a show off as the others.

How can you say I'm "spreading the word where the feedings are" when you are the ones with your faces plastered all over the internet? Nobody has seen me on the internet. I do not feed the parrots nor do I have an ego so large tjat I feel the need to mug for cameras they way your group does, over and over again. An ego that makes you and the other "feeders" constantly show up on the afore mentioned sites bragging how the birds "love the interaction" with you.

Your group was told the feedings were dangerous, but your group has been claiming over and over that "nothing will happened, because we are there to watch." Well, where the hell were you Sunday when that guy had a bird hidden under his shirt?

You and your group are so proud that you can interact with these birds that, even as someone is trying to steal one from under your nose, you still don't get it. Or maybe you do get it, but just don't care, because you care more about your own wants and needs than you do that of the birds. You love mugging for the cameras and being on radio.

Why don't you go get some friends so you don't have to rely on the birds to satisfy your needs and get you publicity.
Add a Comment
§Support the ban
by nabrudigam
Tuesday Jun 19th, 2007 1:05 AM
Anti feeding t-shirts, mugs, totes, etc. can be purchased at:

http://www.cafepress.com/calendarflr/3103096
Add a Comment
§PAWS article
by nabrudigam
Tuesday Jun 19th, 2007 1:32 AM
For more information on the detrimental effects of feeding wildlife, please read the PAWS article at the link below. Thank you for caring about the parrots. 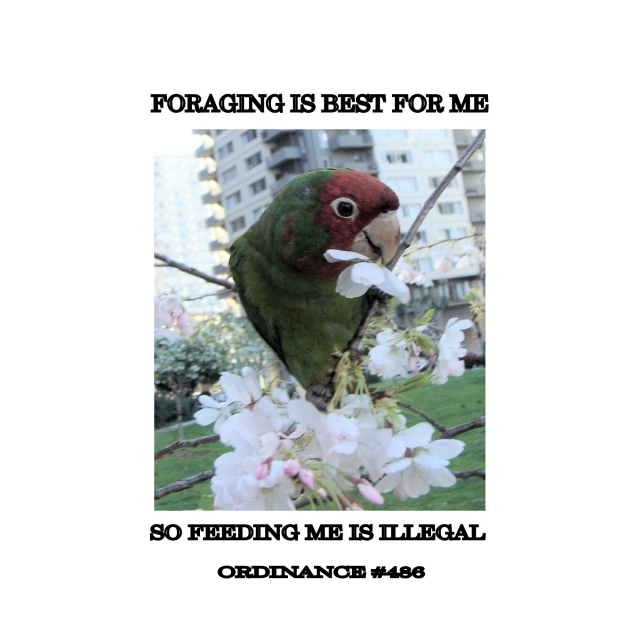 original image (2000x2000)
Feel free to copy and distribute
Add a Comment
§I just wanted to let people at the park to know what I saw...so we can help if needed.
by THERRON
Tuesday Jun 19th, 2007 4:37 PM
Dear Friends of the Parrots,
I wasn't trying to start anything political - of whether you're for the feeding or against feeding the parrots. I just would like to warn everyone to keep a watch out for people who would harm the parrots. That man that I saw on Father's Day grabbed the parrot so fast - I was just shocked to see someone like that be so callous. When I yelled at him as he was showing me the parrot underneath his t-shirt he said, "I'm letting him go, see no harm, no harm". As the man got in his car after letting the parrot fly away, his girlfriend simply laughed... as I kept threatening them with calling the police.
I came over and talked with some of the group who were feeding the parrots/ and some who were watching. Like I said then, I wish we could have caught it on tape or camera, and had record of their licensce plate - I hope they do not have other parrots @ home. Again, black car with Hayward license plate - A Latino couple- man with a mustache, the woman- thin, long curly dark hair down to her waist. I don't go to the park every day- just once in awhile. Thank you all for listening and caring about the parrots.
Add a Comment
§THERRON
by nabrudigam
Tuesday Jun 19th, 2007 6:04 PM
THERRON, you did not start anything "political". This issue has been a hot potato for some time and will no doubt remain so. Some of the people who were in the park feeding that day were from a group calling themselves "the wild parrot feeders." They are totally against the ban and claim that the feedings are beneficiall to the birds and yet you saw for yourself how easily a bird can be snatched because of being too tame thanks to these people feeding them every day.

The group further claims that they protect the birds and yet in your report of the incident you indicate nobody "backed you up." Shocking, considering this group stood before the board of supervisors claiming they are there to protect the birds, yet you were the only one who made the effort to stop the thief.

Thank you for what you did. We need more people like you in the park

Add a Comment
§Another stealing attempt reported
by nabrudigam
Tuesday Jun 19th, 2007 10:55 PM
Today I received a report of another attempt at stealing a parrot. It happened at the Greenwich steps some time in the last two weeks. See the report at:

http://www.indybay.org/newsitems/2007/06/19/18428692.php
Add a Comment
§Theron, I was one of the people you spoke to that day
by jeff
Wednesday Jun 20th, 2007 5:04 AM
Just wanted to say thanks for your efforts, which were nothing short of heroic. None of us heard the incident but if we had we would have been right with you and the creep would have heard it from everyone.
Add a Comment
Support Independent Media
We are 100% volunteer and depend on your participation to sustain our efforts!