Add an Event
Newswire
Calendar
Features
Home
Donate
From the Open-Publishing Calendar
From the Open-Publishing Newswire
Indybay Feature
Publish to Newswire
Add an Event
Related Categories: Santa Cruz Indymedia | Drug War
A Portrait: 420 at UC Santa Cruz
by josh sonnenfeld (sugarloaf [at] riseup.net)
Wednesday Apr 25th, 2007 1:49 AM
Every year on April 20, folks gather around North America to celebrate and smoke. UC Santa Cruz has historically had one of the largest gatherings around, a self-fulfilling prophesy of sorts, spurred on by UCSC's unique cultural history and the occassional spotlights from outside (like Rolling Stone Magazine a few years ago). Its a big community event - a place where thousands of people can bring a bunch of friends, musical instruments, frisbees, you name it, and just have fun. It's in a safe and relatively secluded location (Porter Meadow) and problems are rare.

Over the past few years, the usual practice has been for a police officer and an administrator to come by towards 5:30 or 6 and urge people to move on. By that time, most folks have been there for a few hours and are pretty much ready to go, so the event gradually fizzles out. This year, however, something changed. Administrators, who have become increasingly paranoid over student protests, decided to assemble a large group of police and administrators in the meadow an hour before 4:20.

This part of the story is a little unclear, but my understanding is that the administrators passed out a bunch of ridiculous flyers (see below) about how smoking pot is illegal (the same color flyers that they pass out to protesters at rallies listing all the infractions they could be charged with) while the police effectively deterred people from attending due to their presence. According to sources, the police were mostly interested in giving traffic citations (especially at the base of campus), anyone dealing weed, drinking alcohol, or trying to sell goods, but one can assume that their primary purpose was intimidation. The students, weirded-out by a bunch of cops sitting in on the meadow, headed up to Porter College nearby, while others went to College 9/10 with the intention of just smoking there. Then, the story goes, as large numbers of students started arriving at Porter, they marched down to the meadow and retook the space from the police and administrators, initiating the yearly 420 festivities again as the majority of police and administrators dispersed.

By the time I arrived, the police were no longer visible, the administrators were out of sight (to reappear in my last photo of the set), and the celebration was in full swing. These photos document the various activities that make up UCSC's annual 420 extravaganza. If anyone has more information (especially photos) about the police presence and how Porter Meadow was retaken by students, please comment! 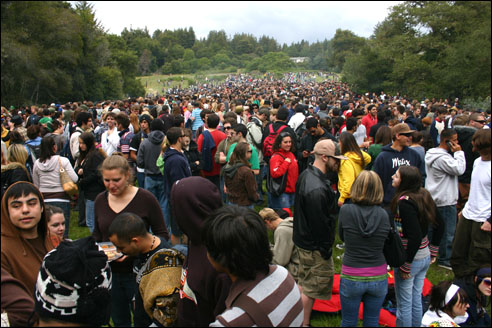 Measure K, passed by 64% of Santa Cruz voters in the November 2006 elections, makes enforcement of state and federal laws pertaining to the distribution, sale, cultivation or use of marijuana by adults their lowest law enforcement priority. Even though students vote in City elections, the University of California is exempt from local measures.
§No More Drug War
by josh sonnenfeld Wednesday Apr 25th, 2007 1:49 AM 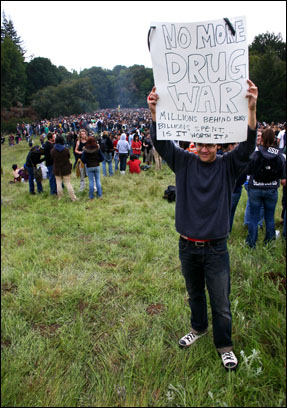 Unlike the last two years, there were a few folks holding up signs trying to connect up 420 activities with decriminalization/legalization. While smoking is itself an act of civil disobedience - breaking an unjust law - getting folks to connect up their individual actions with a long-term movement is an ongoing process.
§Porter Meadow
by josh sonnenfeld Wednesday Apr 25th, 2007 1:49 AM 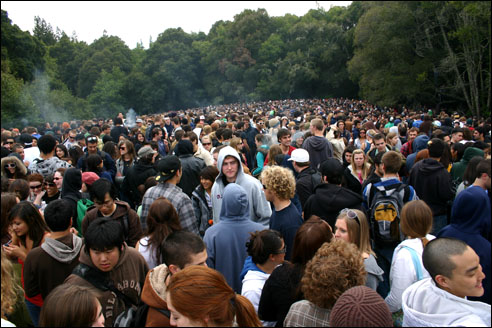 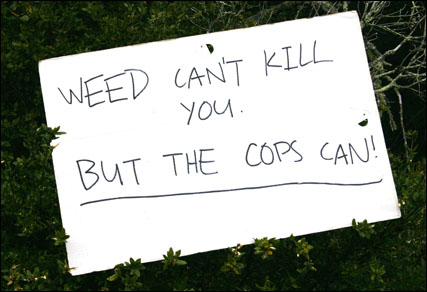 I imagine this was put up as a reaction to the police presence earlier in the day.
§What Will You Be Doing 4/20?
by josh sonnenfeld Wednesday Apr 25th, 2007 1:49 AM 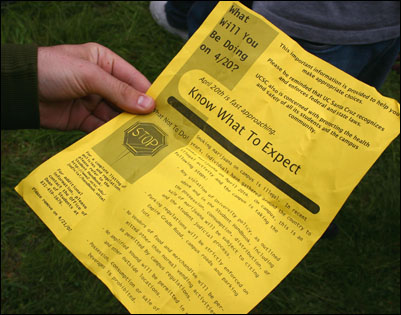 While administrators claim the flyers, now passed out at any protest or other events they don't control, is to 'inform people of their right to protest,' the purpose is to intimidate folks by listing all the arbitrary things that they can be charged with. Compare this to the flyer I posted at the bottom of this article: 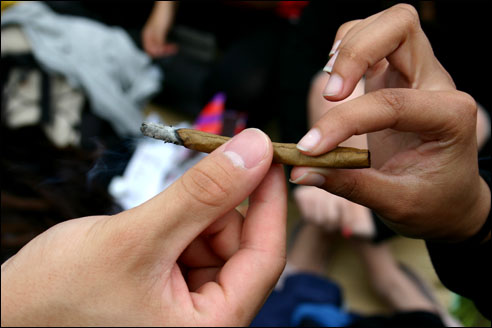 Luckily, students took it upon themselves to ensure that administrators and police didn't interfer with a long-time UCSC tradition.
§Umbrella
by josh sonnenfeld Wednesday Apr 25th, 2007 1:49 AM 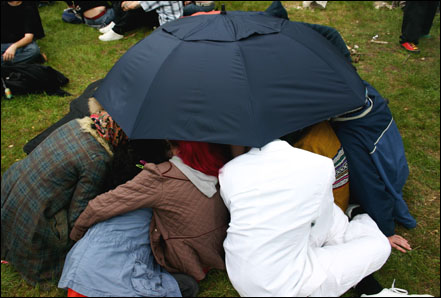 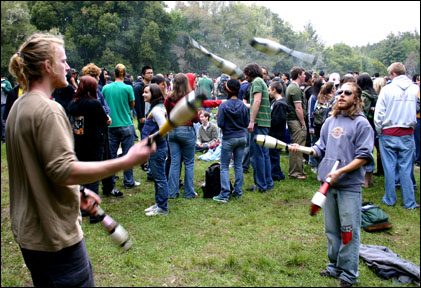 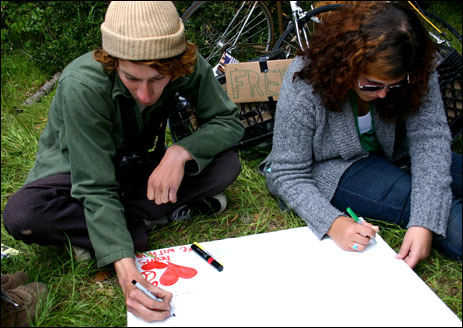 Students filled a few posters with messages for those affected by the Virginia Tech tragedy. They're planning on mailing them.
§My Mind My Choice
by josh sonnenfeld Wednesday Apr 25th, 2007 1:49 AM 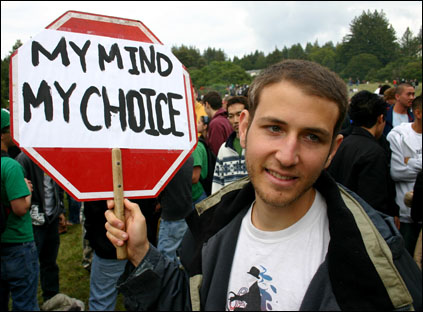 The other side of his sign says, "Reform Now". Both he and the other guy pictured with the sign roamed around the crowd for a few hours.
§Music
by josh sonnenfeld Wednesday Apr 25th, 2007 1:49 AM 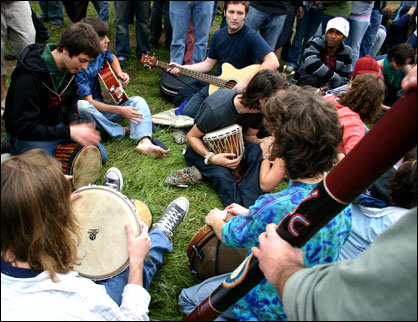 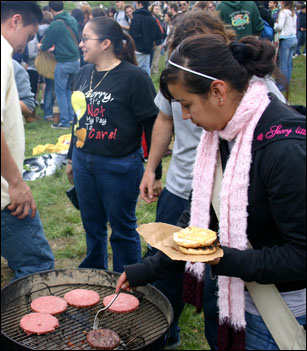 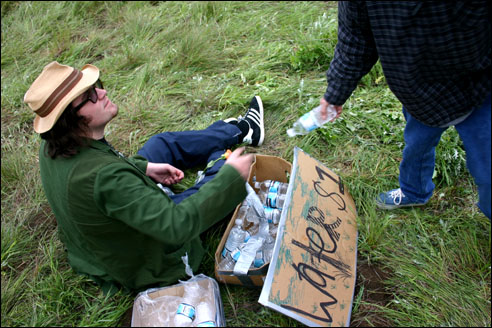 There were about a dozen different folks selling various food items. It was all really cheap - like this guy selling water for $1. The students weren't making much money at all (especially if you think about how much sports stadiums charge for food) - mostly just providing a service to their peers and keeping them from being dehydrated.
§SlugLife
by josh sonnenfeld Wednesday Apr 25th, 2007 1:49 AM 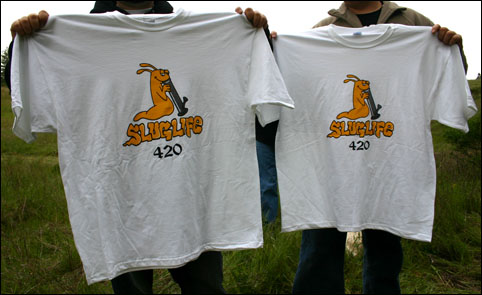 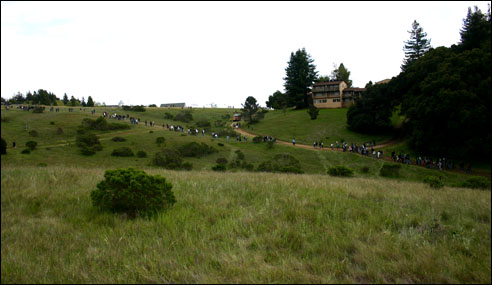 This path looks like a bunch of ants marching. At the start, everyone is coming towards the meadow. In the middle, the traffic is both ways, and at the end, everyone is going back towards the bus stops and other colleges.
§Firemen
by josh sonnenfeld Wednesday Apr 25th, 2007 1:49 AM 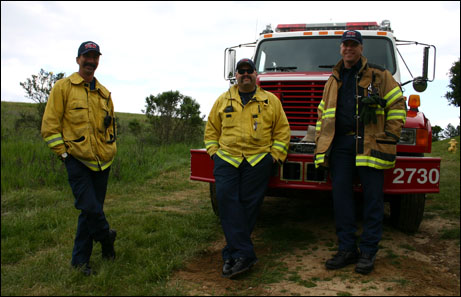 These guys stood by their truck for a few hours. They said they were having a good time - no problems.
§Walking Home
by josh sonnenfeld Wednesday Apr 25th, 2007 1:49 AM 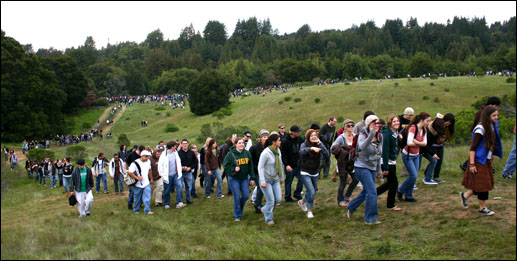 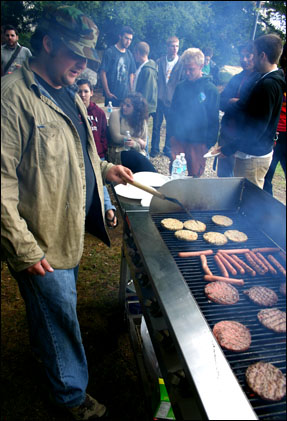 This RA at Porter College was nice enough to cook everyone up a free BBQ! A big sense of community and a good place to be on 420!
§How Many Administrators Does It Take to Screw in a Lightbulb?
by josh sonnenfeld Wednesday Apr 25th, 2007 1:49 AM

Admins regrouping after the day's festivities.

There's 13 of 'em in this picture. Using very conservative numbers, if each of them gets paid $60,000/yr, works 48 wks a year at 40 hours/wk, they would get paid apprx. $31 per hour each. Let's say, and this is probably a low estimate, that they spent 3 hours unneccessarily observing and interfering with 420 activities. That's approximately $1200 of our money wasted. And that's not even including the wages of the UCPD, the Fire Dept., or the work that administrators could have and should have been working on instead of observing protests.. like improving our education.

At least its not the estimated $30,000 it costs every time they bring UC Berkeley or UCLA police up to Santa Cruz to deal with protests...
Add Your Comments

Now if such demos were only held weekly or monthly. Or perhaps every time a student were cited or arrested, or a trial was held.

If you've been cited or know of a case, please post it on indybay.
Add a Comment
§What happened
by random porter-ite
Thursday Apr 26th, 2007 2:13 AM
I went down to the meadow early and was turned away by some campus security officers and cops. So me and two other random folks went back to the porter quad and told everyone there that we would all go down as a group at 4pm and "re-take the meadow." Many students were discouraged and instead went up to the college 9/10 meadow, but between the three of us we were able to get around 300 students gathered in the quad.
We actually ended up getting impatient and went down en mass at 3:30ish, and as soon as our group started down, it seemed like everyone on campus followed shortly thereafter, with many people at the 9/10 meadow changing their minds and following us.

There's some good videos of it on youtube, and I know there are many more photos and video floating around there.

On a side note, one of the two other people I was with who were trying to rally the rest of the students was given a write up by administrators for unspecified rule violations.
Add a Comment
§wow, thats a lot of people
by M
Thursday Apr 26th, 2007 4:59 PM
its unfortunate we cant get this amount of people for more pressing issues.
Add a Comment
§observations
by student (repost)
Monday Apr 30th, 2007 7:54 PM
I was down at the meadow before the larger crowd showed up. I got to the top
of the hill sometime around 2:30, and sat for a while and watched the
propoganda minister (Safety Committee Liaison or something), passing out the
yellow fliers and talking to people. There were two uniformed cops and one
that looked like he was a cop in plain clothes or a university official, and
a few more roaming the field, no more than 10 but I don't think there were
that many. The cops weren't initiating any contact, but some of the students
got into conversation. At that time there were only about 10-15 students
sitting down near the cop's Tahoe.

We talked to the fire department officials that were at the top of the hill,
(outside of the Porter dining hall)...they said that they were called a
month ago by the UC Regents office, and asked them to be there to 'ensure
safety'. The police had a similar story...that they were called by the
Regents about a month ago. The propogandist, however, said that they have
been planning this since last year, after someone was apparantly injured and
there were health/safety concerns. He said that for at least the last few
months they had this in mind.

I did hear those rumors going around that someone called the UC regents and
threatened to pull funding if there was no action taken.....but it was the
same rumor that went around without much else to help or confirm it.

When I was walking to the meadow some passer-bys said that they were
gathering at 9/10, some said they were going to charge the field at 420. I
was sitting down at the meadow, near the cops, which by about 4 or so there
were 4 standing by the vehicle, and the rest were up on top of the hill. We
heard the noise coming from up at Porter and saw the line of people began
walking down. There was also a good-sized group at the top of the hill by
the Porter dining hall where the fire fighters were, and they came down as
well.
When the masses were coming down the hill I was a bit curiously concerned
about what would happen.....whether there were room fulls of police waiting
for their chance....perhaps taking the oppurtunity present after hearing
news that with the recruiters not showing up on Tuesday, thus ruining their
chance to bring another beat down.

... it was completely peaceful....no instigations from either the students
nor the police. They went right on past the police down to the lower part of
the Meadow. The people kept flowing on in...and I wondered down there. Made
it up to where the police were about some time later, an hour maybe, and the
police had left and the crowd had grown to thousands. Quite astonishing
(this was my frist of its kind). 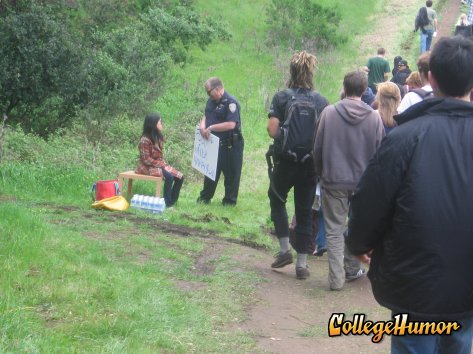 "The only Cop at UCSC on 4/20. Arresting some girl for selling water and food to stoners."
http://www.collegehumor.com/picture:1755123 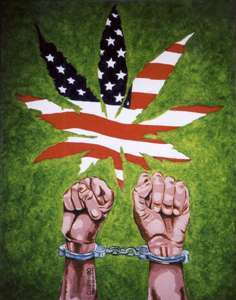 http://arkansas.indymedia.org/newswire/display/20845/index.php
Add a Comment
Support Independent Media
We are 100% volunteer and depend on your participation to sustain our efforts!