Add an Event
Newswire
Calendar
Features
Home
Donate
From the Open-Publishing Calendar
From the Open-Publishing Newswire
Indybay Feature
Publish to Newswire
Add an Event
Related Categories: Central Valley
Hundreds in Sacramento Protest Iraq War on 3rd Anniversary
by Gary Zimmerman (glzimm [at] comcast.net)
Sunday Mar 19th, 2006 11:35 AM
The culmination of three consecutive Saturday anti-war/anti-Bush rallies was held in Sacramento on March 18. Over 400 Sacramento activists gathered at 16th & Broadway to mark the third anniversary of the U. S-led illegal aggression against the sovereign nation of Iraq.

(Sacramento, CA March 18, 2006) The culmination of three consecutive Saturday anti-war/anti-Bush rallies was held in Sacramento on March 18. Over 400 Sacramento activists gathered at 16th & Broadway to mark the third anniversary of the U. S-led illegal aggression against the sovereign nation of Iraq.

This series of Saturday rallies, which started on March 4, were multi-national, multi-issue protests focusing on the illegal, bungled occupation of Iraq, now slipping into full blown-civil war.

The third anniversary of the “greatest strategic disaster in United States history” (retired Gen. William Odom) coincides with the Pentagon’s announcement of three Americans' deaths in Iraq, bringing the U. S. military casualty total to at least 2,315 dead and 17,100 wounded since the beginning of the war in March 2003. Estimates of the total number of dead in Iraq in consequence of the war are as high as 500,000.

Three years into the war based on lies, oil and imperialism, about two out of three Americans are against it. Bush’s approval ratings have dropped to 33% (Nixon resigned with a 29% approval).

Even if the U.S. exits Iraq within the next three years, total direct and indirect costs to U.S. taxpayers will be more than $400 billion, and some estimates put the total economic impact at up to $2 trillion.

"For misleading the American people and launching the most foolish war since Emperor Augustus in 9 B.C. sent his legions into Germany and lost them, Bush deserves to be impeached and, once he has been removed from office, put on trial." (Martin Van Creveld, a professor at the Hebrew University in Jerusalem who is considered one of the world's foremost military historians.) 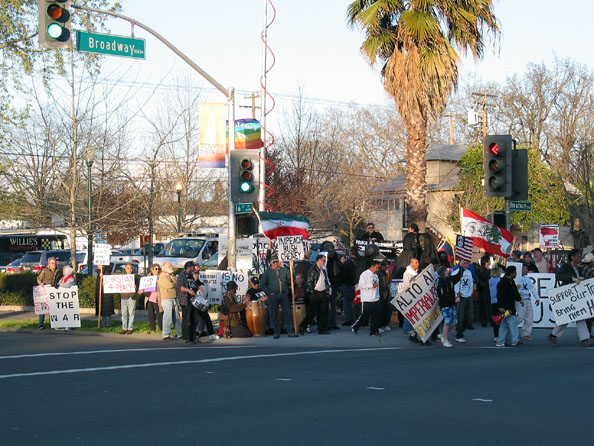 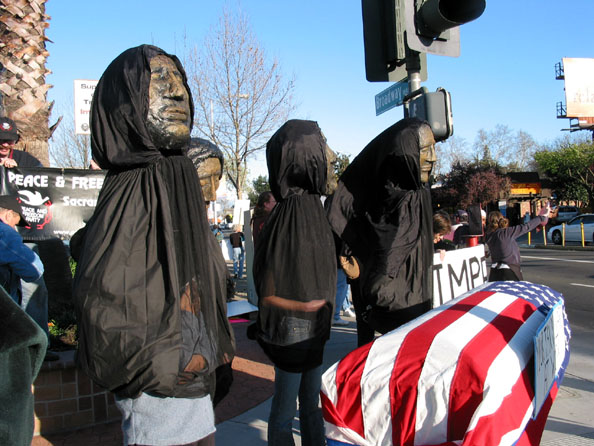 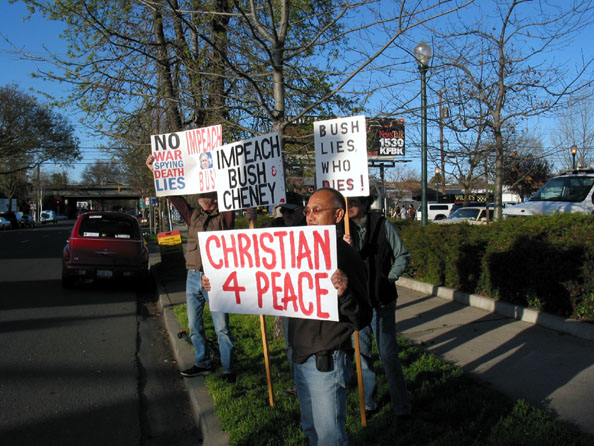 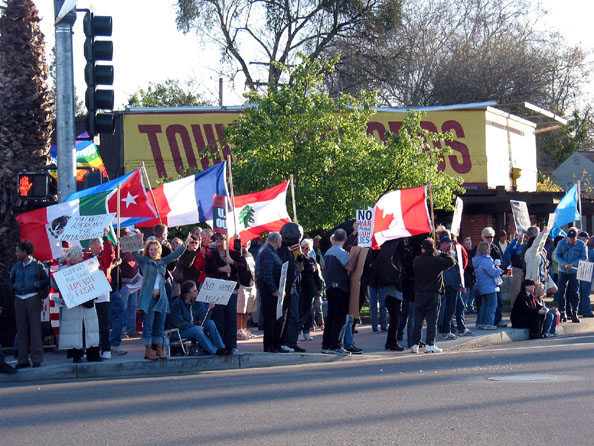 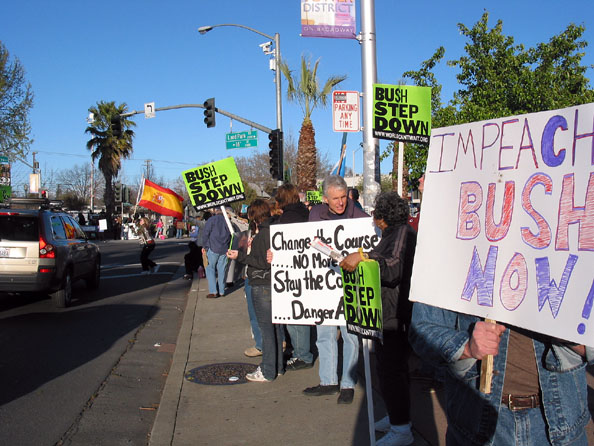 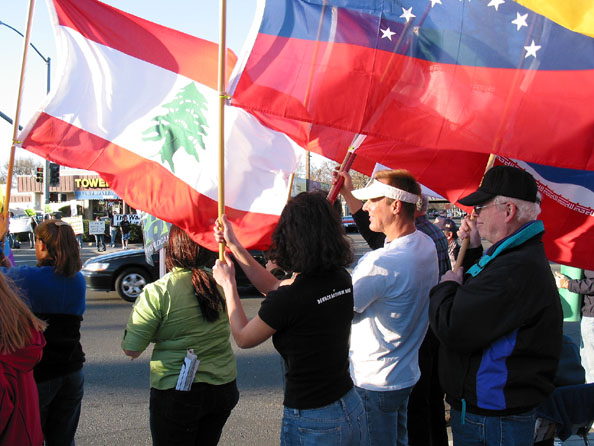 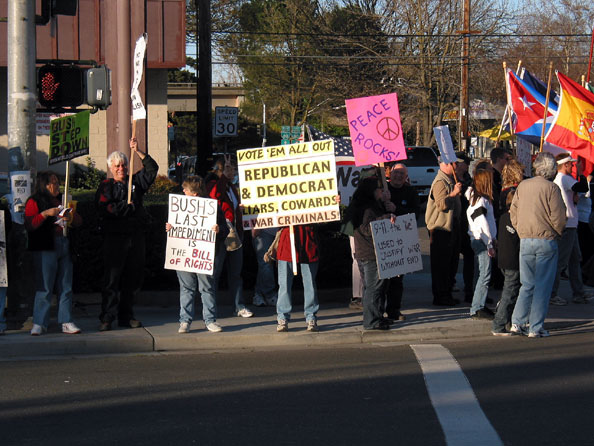 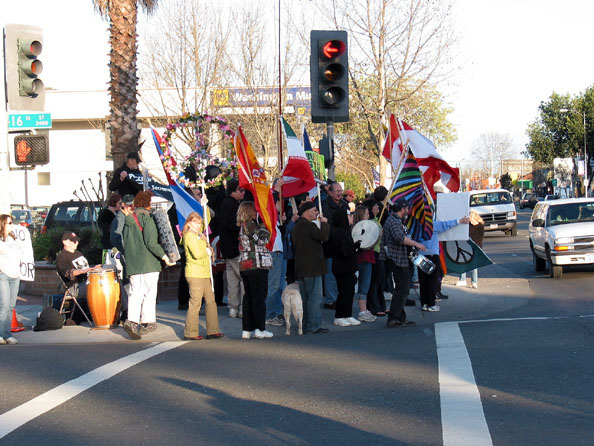 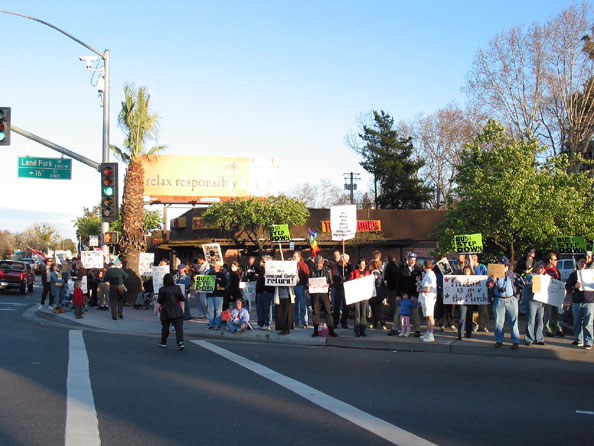 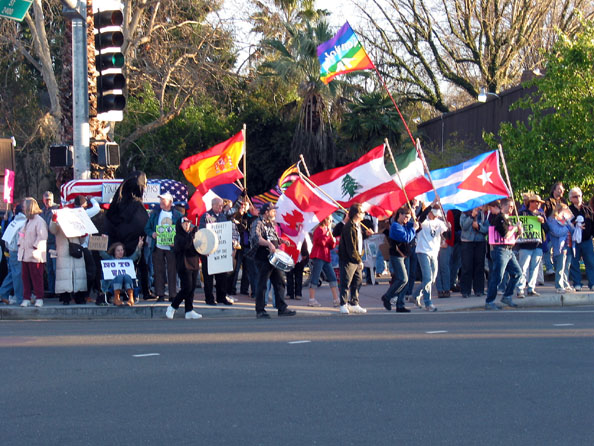 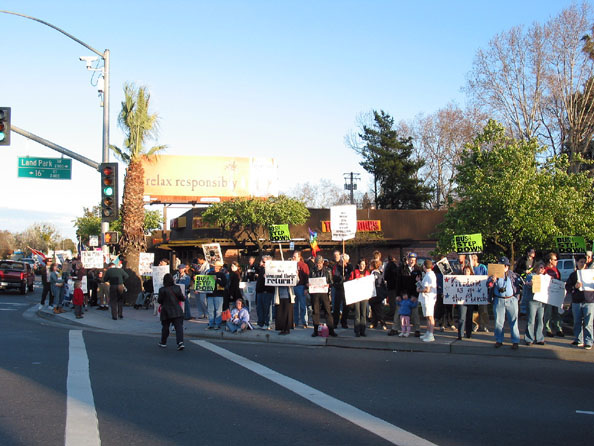 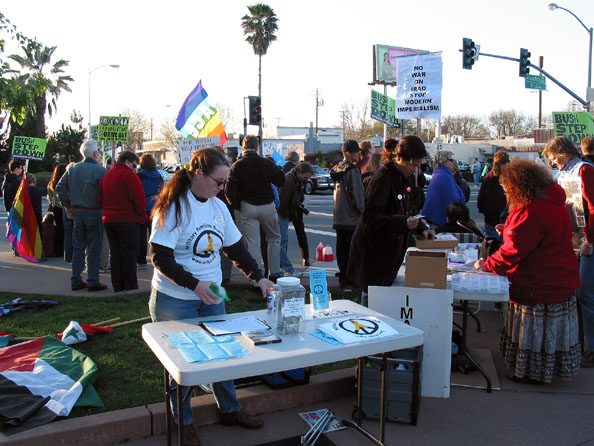 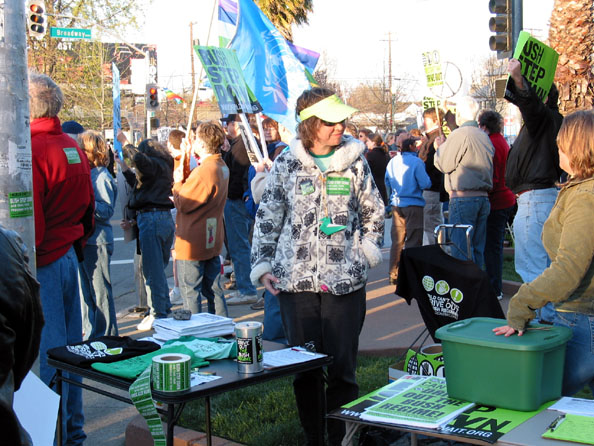 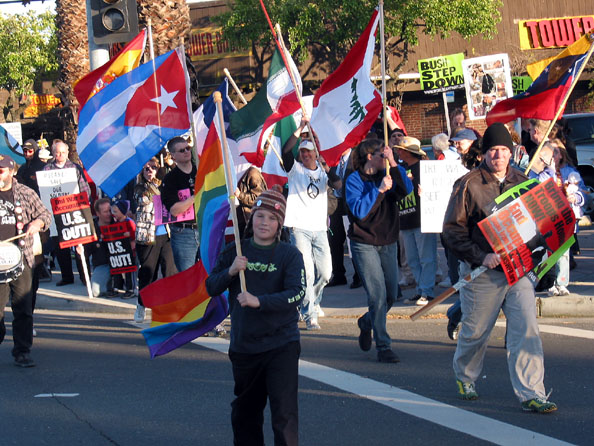 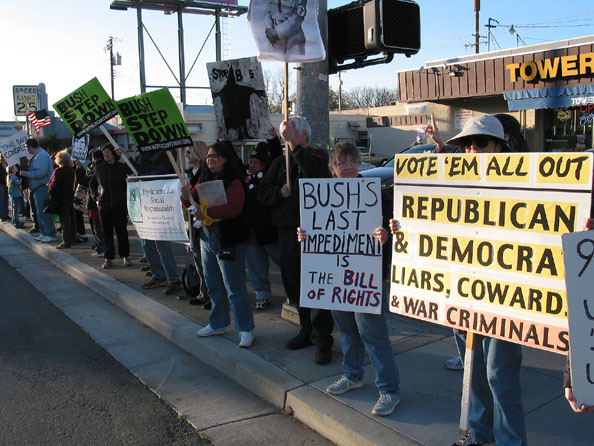 §comment
by Jim
Sunday Mar 19th, 2006 12:48 PM
It would have been nice if the Bee actaully covered what was happening in Sacramento. They covered the protests in San Francisco, but why not in their home town? It's ironic because this seemed like the largest protest at this intersection and nothing. The news came out for Cindy Sheehan which is great but there are hundreds of people at this intersection that think the same thing as she does. The protests are more than just one familiar face. The writers at the Bee are worthless if they can't cover stories in their home town. Oh yeah they also advertise sex with diminishing the prospect of colds, and an air show. Keep up the good work assholes.
Add a Comment
§comment, also
by John Crockford
(john [at] crockford.org) Sunday Mar 19th, 2006 1:39 PM
The Fresno Bee did not carry anything about the local anti-war event that took place here in Fresno either! But that should not surprise us. This is why we have IndyMedia!!!
http://peaceandfreedom-sjv.org
Add a Comment
§Sacramento needs an Indymedia of its own
by William
Sunday Mar 19th, 2006 3:50 PM
Hope Sacramento gets its own, ('IndymediaSAC'/Indymedia), like, L.A./Los Angeles has or like, San Francisco has.

I think it could.

Darn, IT! This is the State Capital!!!!!!!!!!!!
Add a Comment
§Sac Indymedia
by Comment
Tuesday Mar 21st, 2006 8:16 AM
There have been mtgs. re: a sac indymedia, but it takes a lot of infrustructure from what I understand. We seem to have very limited contributors as well, unfortunately. I support having one to cover sacramento area news, but I'm not sure if we have the #s to work on it.

Also, I am way past the point of cajoling the establishment media to cover us. One way people know there is opposition is by seeing people out on the streets.
Add a Comment
§where to find upcoming events
by mandy
(amandakwyatt [at] gmail.com) Tuesday Apr 11th, 2006 10:53 AM
WHERE do you find upcoming events like protests in sacramento, icannot find the info anywhere!
http://na
Add a Comment
§A couple of Indybay sources.
by indybay editor
Tuesday Apr 11th, 2006 11:06 AM
You can check http://www.indybay.org/antiwar/ and http://www.indybay.org/centralvalley/ (and http://www.indybay.org/centralvalley/#calendar). There are several Sacramento area events currently for April.

If you find any information outside of Indybay, you are more than welcome to publish it yourself to share with others in the Indybay calendar or newswire at http://www.indybay.org/calendar/event_display_add.php and http://www.indybay.org/publish.php.
Add a Comment
Support Independent Media
We are 100% volunteer and depend on your participation to sustain our efforts!