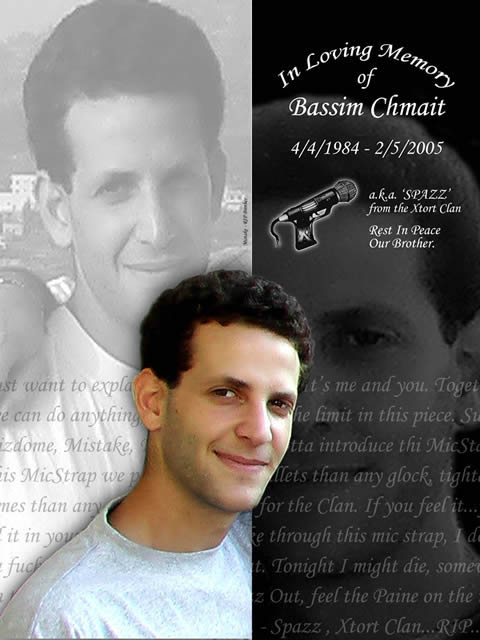 This incident happened about 15 minutes from my house in the Madrid apartment complex in Mission Viejo, CA on Feb 5, 2005.

As far as a political discussion, this would probably fall under the same category as Amadou Diallo Case, and Abner Louima in an example of law enforcement brutality bordering on outright criminality. Here are the relevant facts:

Early in the morning on Saturday February the 6th around 1:30 am, Bassim Chmait along with three other friends were walking through an apartment complex heading towards a college house party. As they were walking through the apartment complex one oo the neighbors threw a soda can at them from above. In frustration, one of the young boys threw the can into the street, and continued walking down the pathway of the apartment heading to the party. At that point Douglas Bates, an off duty U.S. Custom's officer, left his home with his badge in hand and gun drawn confronting the group of 4 to 6 friends. . he started to yell at them, and when the group of boys turned around, they saw the provoker yelling at them about laughing and being too loud, he was heading towards them pointing his gun a them with a badge in the other hand, yelling "You don't want to fuck with a cop, do you?" Apparently he was upset at the noise and commotion. Mr. Bates then pistol whipped one member of the group. The aggressor was an off duty border patrol/homeland security officer who was not in uniform, his name is Douglas Bates. The four unarmed boys were questioning him, asking why he was pointing his gun at them and begging him to put it down. One of the four boys that were there kept asking the gunman to stop pointing the barrel of the gun in his friends direction. Because of that, the aggressor pistol-whipped his friend on the forehead w/ the gun. Anticipating that the provoker was going to hit his friend again Chmait Bassim got in front of his friends telling the man to please put the gun down. Almost instantly the off duty cop shot Bassim in the head and face by Douglas Bates. After shooting Bassim, Mr. Bates simply walked back into his apartment. While friends were screaming for Bassim and neighbors dialed 911. About 5 minutes later the murder opened his door, with the gun still in hand and yelled at neighbors to shut up, and he want back inside his apartment.

This story comes straight from four witnesses, and neighbors that were there when the murder took place, they saw and heard everything that occurred that night.

Here are the reports that this information was taken from:

Full disclosure From Eyewitness of the murder:

I know and was casual friends with Bassim Chmait for the short time that I have lived in California. He and his friends were accepting and friendly to a sort of clueless New Englander transplant that I am here in Orange County. To me, this group was a typical group of friends, attending college, partying on the weekends, working crappy mall jobs on the side, even forming their own rap group complete with self-produced CDs. No different than any other group of friends I knew of growing up in suburban Massachusetts. I'm obviously biased towards Bassim and his friends regarding this incident, but that does not mean a reasonable person would not be suspicious after weighing the facts. I just took information from the A.P. and Orange County Register reports above, and didn't include information that I know from 1st and 2nd party sources. There are two independent witnesses not connected at all to the group of friends who saw the shooting, one of whom, a 30-something blonde women, I overheard saying that the authorities would arrest Mr. Bates, but had to go though established procedures. I can't help but think that was empty lip-service paid to a woman who had saw first-hand a violent death. Also, I've heard from members of the group that Bassim was not walking toward Mr. Bates to threaten him, but to aide his friend (whose name wasn't in the report) Mike who was on the ground bleeding from his head after being pistol-whipped.

I attended the candlelight vigil last night at the apartment complex where Bassim was murdered. a scene where typical suburban parents and grandparents mourned the fallen intermixed with younger peers sending off Bassim. All this occurred while Douglas Bates was 100 yards away in his apartment, seemingly unafraid of being arrested for murder. Words cannot express the frustration and anguish for everyone in attendance to know that he was still free while they were attempting to mourn and celebrate his short life.

It is hard not to let the pain of losing someone you know under these circumstances fuel suspicion in the integrity of the legal and law enforcement process. The Arab-American community that Bassim was part of is deeply suspicious of the process, and at various times attendees yelled out "Justice" during the vigil. I can't help but think that if this occurred in the college apartments in Amherst, MA where I attended college, and if the group of kids involved wasn't Arab-American, that there would be no question that an off-duty federal officer would be apprehended immediately. How can there even be the implication that Bates was just defending himself with the facts taken from the incident? But that implication exists in the news reports, where they noted he had a cut lip. The group of young adults had no way of issuing a threat of lethal force; there was no excuse for Bates to use his firearm.

The purpose of posting this is to simply give it more of an audience than Orange County. I figured it would be front page news that a federal officer shot and killed a 19-year old young adult. All that it is has gotten is two A.P. releases, and a write-up in the Orange County Register Local section. In an incident like this, the facts that come out first serve as the template for later attention, and I want to get out the facts that suggest that Douglas Bates behaved in a criminal manner, and not in righteous self-defense. If Mr. Bates receives no punishment, there is the possibility for a news story in the magnitude of Amadou Diallo. If the established media don't look into incident in a more detailed comprehensive way, I would hope that this could be kept alive in blogdom to prevent it from sinking down the memory hole.

And you might think that this is all a single incident, but it isn’t. Orange County, CA happens to be one of the richest and most exclusive communities in the country.. but with wealth and privilege, come power and corruption. Orange County police have been known to cover up for each other. Just a year ago officers tried to hide a run-in with assistant sheriff's son, who faces a rape trial.(See Teen Sex, Cash and Videotape - All of millionaire Don Haidl’s fortune can’t buy his kid a dollar’s worth of sense , and The Game Is Up - Despite daddy’s money, power and influence, gang-rape defendant Haidl runs out of outs) and just 6 weeks ago the wife of San Clemente Sheriff was involved in a hit-and-run accident which killed a 10 year old boy on Camino De Estrella, No charges have been filed, and police refuse to give any statements about the matter.

Attend the Vigil Every Saturday Night @ 9:00 PM until JUSTICE has been served.
DIRECTIONS: In Mission Viejo just take Los Alisos all the way down past Marguerite, and the Madrid Apartments will be on the left hand side, look for a group of people there.

Contact Orange County Sheriff Department and demand that they properly investigate this case.
Orange County Sheriff Department
714-647-7042 OR 949-425-1800 OR 714-628-7170
Inquire why the shooting of Bassim Chmait is not considered a crime. Get them to state publicly that the U.S. Customs Agent was acting is self-defense, which is completely ludicrous, but pin them down on their rationale.

I've been told that it would be more effective to make inquires regarding this incident to the Orange County District Attorney's Office. His name is Tony Rackauckas. The Main Office Phone Number is:
714-834-3600

Here is the link to the DA's website:
http://www.ocgov.com/da

Here is some contact information for the U.S. Customs & Border Protection.
First here are links to email complaints the CBP: Make a comment about U.S. Customs and Border Protection by clicking hereRegister a complain with the CBP here Click on the "Ask a Question Tab" to send an email. I have doubts that this will all the effective. But the more the noise directed at the CBP the better.

Here is more general info about the Los Angeles office and the D.C. headquarters:

Here is the information for the:
CRIMINAL INVESTIGATION DIVISION
550 N. Flower Street, Santa Ana, CA 92703
(714) 647-7040
occid [at] ocsd.org
§justiceforbassim
by justiceforbassim Sunday Feb 27th, 2005 4:04 PM
1) Contact the Orange County DA's office and ask what is being done about the shooting of Bassim Chmait. Let them know your name, and where you are from. Contact information:
Main office phone number: 714-834-3600
Email: tony.rackauckas [at] da.ocgov.com

2) Contact the Orange County Sheriff's Department. Let them know you are unhappy and suspicious with how they are handling the case.
Contact information:
Public Information/Public Affairs Office Jim Amormino, Director:
(714) 647-7042

3) Write a letter to the editor of your local newspaper, detailing how you feel about this incident. If you are in Southern California, write the Orange County Register or the Los Angeles Times. Click here for Newspaper contact information.

4) If you live locally to Orange County, Please feel free to attend organized events in support of Bassim's Chmait's family, friends, and community. Click here to see an updated schedule of events.


http://www.justiceforbassim.com/whatyoucando.htm
Add Your Comments
LATEST COMMENTS ABOUT THIS ARTICLE
Listed below are the latest comments about this post.
These comments are submitted anonymously by website visitors.