Pictures shown on TV networks showed a man slumped on the floor of a mosque, where rebels had earlier been shooting at US troops. When the troops realised the man was not dead, one opened fire, hitting him in the head at close range.

The wounded man was half-sitting against the wall, wearing an orange headscarf.

Before the troops entered the mosque, one is heard saying: “We have got two in there.”

Another asks: “Did you shoot them? Did they have any weapons on them?”

As the cameraman followed the Marines inside, one is heard to say: “These are the two wounded that they never picked up.”

There is shouting among the Marines and then one opens fire. At that point news channels, including CNN, blacked out the image. 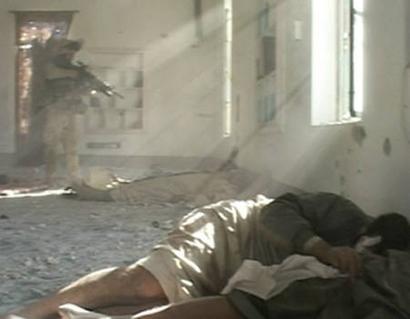 spokesman at Marine Corps headquarters in the Pentagon, Maj. Doug Powell, said the incident was "being investigated." He had no further details, other than to confirm the incident happened on Saturday and that the Marines involved were part of the 1st Marine Division.

NBC used pixelation to cover parts of the video that could lead to public identification of the Marines involved.

NBC's Robert Padavick told members of the U.S. television pool that NBC had agreed to a Pentagon request that the Marines identity be hidden because "they (the military authorities) are anticipating a criminal investigation, and as a result do not want to implicate anybody ahead of that."

In New York, NBC spokeswoman Allison Gollust said the network did not broadcast the prisoner being shot because of the "graphic nature" of the video.

The full shooting video was provided to other members of the U.S. television pool.

The US military is looking into whether an American marine in Falluja shot dead a severely wounded Iraqi insurgent at point-blank range.

Television footage shows US soldiers entering a building as injured prisoners lie on the floor.

The soldier, from the 3rd battalion of the US marines, has been removed from the field and faces possible charges.

The images were taken by an NBC reporter embedded with the US troops in the Sunni city under assault.

The BBC's James Robbins says the incident could prove highly damaging and that the US military will need to answer key questions about whether the rules of engagement were broken during the incident.

It must explain, he says, whether wounded combatants were abandoned, or killed, illegally.

US marines have been battling with sporadic but fierce pockets of resistance inside the city. They say they have already killed 1,200 insurgents.

The images show a group of marines, armed with rifles, entering a building near a mosque.

The mosque had been used by insurgents to attack US forces, who had stormed it, killing 10 militants and wounding five.

At least three severely wounded men are seen in a room inside the building - two are slumped against one of the walls, partially covered with a blanket.

The NBC's Kevin Sites says the wounded men had been left in the mosque after marines had fought their way in on Friday and Saturday.

According to Mr Sites, one of the soldiers points his rifle at the head of one of the injured, an old man. The sound of a shot is then heard.

There was no immediate comment from the Pentagon on the report.

FALLUJA, Iraq (CNN) -- The U.S. military is investigating whether a Marine shot dead an unarmed, wounded insurgent during the battle for Falluja in an incident captured on videotape by a pool reporter.

The man was shot in the head at close range Saturday by a Marine who found him among a group of wounded men. The wounded men were found in a mosque that Marines said had been the source of small-arms and rocket-propelled grenade fire the previous day. 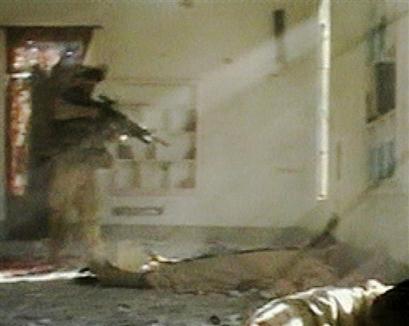 In this cropped image taken from pool video provided to the Associated Press by NBC News, a U.S. marine is seen, left, raising his rifle in the direction of Iraqi prisoners lying on the floor of a mosque in Fallujah, Iraq Saturday Nov. 13, 2004. The pool video was recorded Saturday as the Marines returned to an unidentified Fallujah mosque. The video, in a version aired by CNN showed the Marine raising his rifle toward the prisoners but neither NBC nor CNN showed the shooting itself. The video was blacked out but the report of the rifle could be heard. (AP Photo/NBC News, Pool)

“Did you shoot them?” the lieutenant asked.

“Were they armed?” the lieutenant asked.

The second Marine shrugged in reply.

Sites saw the five wounded men left behind on Friday still in the mosque. Four of them had been shot again, apparently by members of the squad that entered the mosque moments earlier. One appeared to be dead, and the three others were severely wounded. The fifth man was lying under a blanket, apparently not having been shot a second time.

One of the Marines noticed that one of the severely wounded men was still breathing. He did not appear to be armed, Sites said.

The Marine could be heard insisting: “He’s f---ing faking he’s dead — he’s faking he’s f---ing dead.” Sites then watched as the Marine raised his rifle and fired into the man’s head from point-blank range. 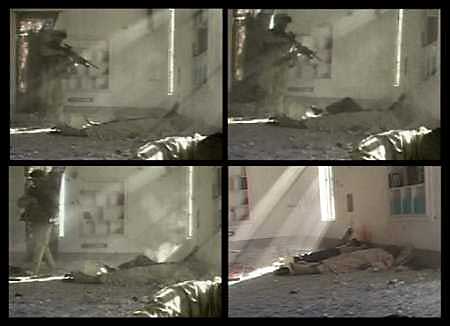 A series of television pool images shot by NBC shows a U.S. Marine shooting dead a wounded and unarmed Iraqi in a Falluja mosque November 13, 2004. U.S. Marines rallied round the Marine now under investigation for killing the Iraqi during the offensive in Falluja, saying he was probably under combat stress in unpredictable, hair-trigger circumstances. Photo by Reuters TV/Reuters

http://www.reuters.com/newsArticle.jhtml?type=topNews&storyID=6828512
§another link to video
by link to video Tuesday Nov 16th, 2004 9:06 AM
Amy Goodman describes the video and then airs a portion of it:
http://play.rbn.com/?url=demnow/demnow/demand/2004/nov/video/dnB20041116a.rm&proto=rtsp&start=10:45.00
Add Your Comments
LATEST COMMENTS ABOUT THIS ARTICLE
Listed below are the latest comments about this post.
These comments are submitted anonymously by website visitors.